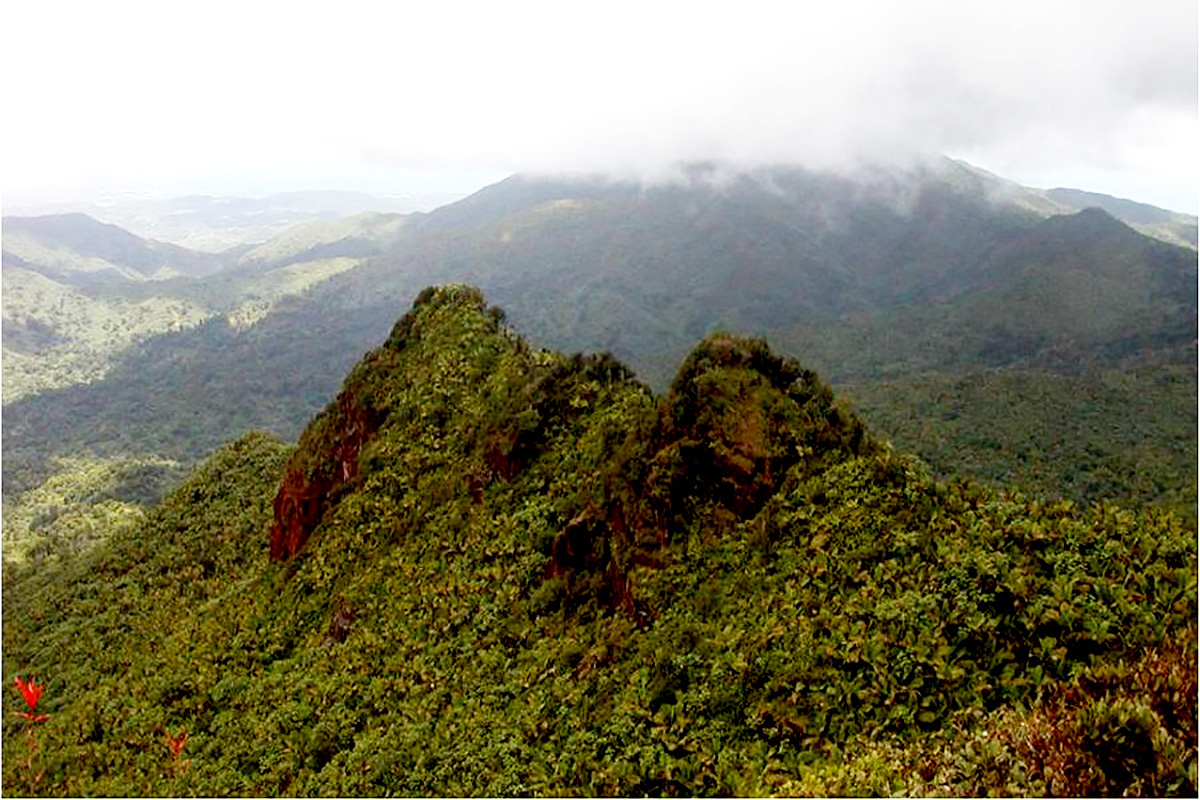 The Luquillo Experimental Forest in Puerto Rico is the site of a unique warming experiment, led by UVA alumna Tana Wood. (Contributed photos)

Tana Wood, who earned a Ph.D. in environmental sciences from the University of Virginia in 2006 and is now working as a research ecologist for the U.S. Forest Service in Puerto Rico, has helped launch the world’s first forest-warming experiment to explore the effects of global warming on tropical forests – ecosystems that play a key role in regulating the Earth’s carbon cycle.

Tropical forests absorb about 30 percent of the world’s human-produced carbon dioxide, thereby helping to cool the planet. This climate regulation is crucial to slowing current warming trends. But the planet is warming, apparently at an increasing rate, which can be both detrimental to the health of forests and reduce their ability to slow the warming.

Wood’s three-year project, which artificially heats six 130-square-foot tracts of Puerto Rico’s Luquillo Experimental Forest, is designed to evaluate the vulnerability of tropical forests to increased temperatures. What she learns about how the understory vegetation and soils respond to warming conditions will help scientists create better models for predicting future climate conditions. 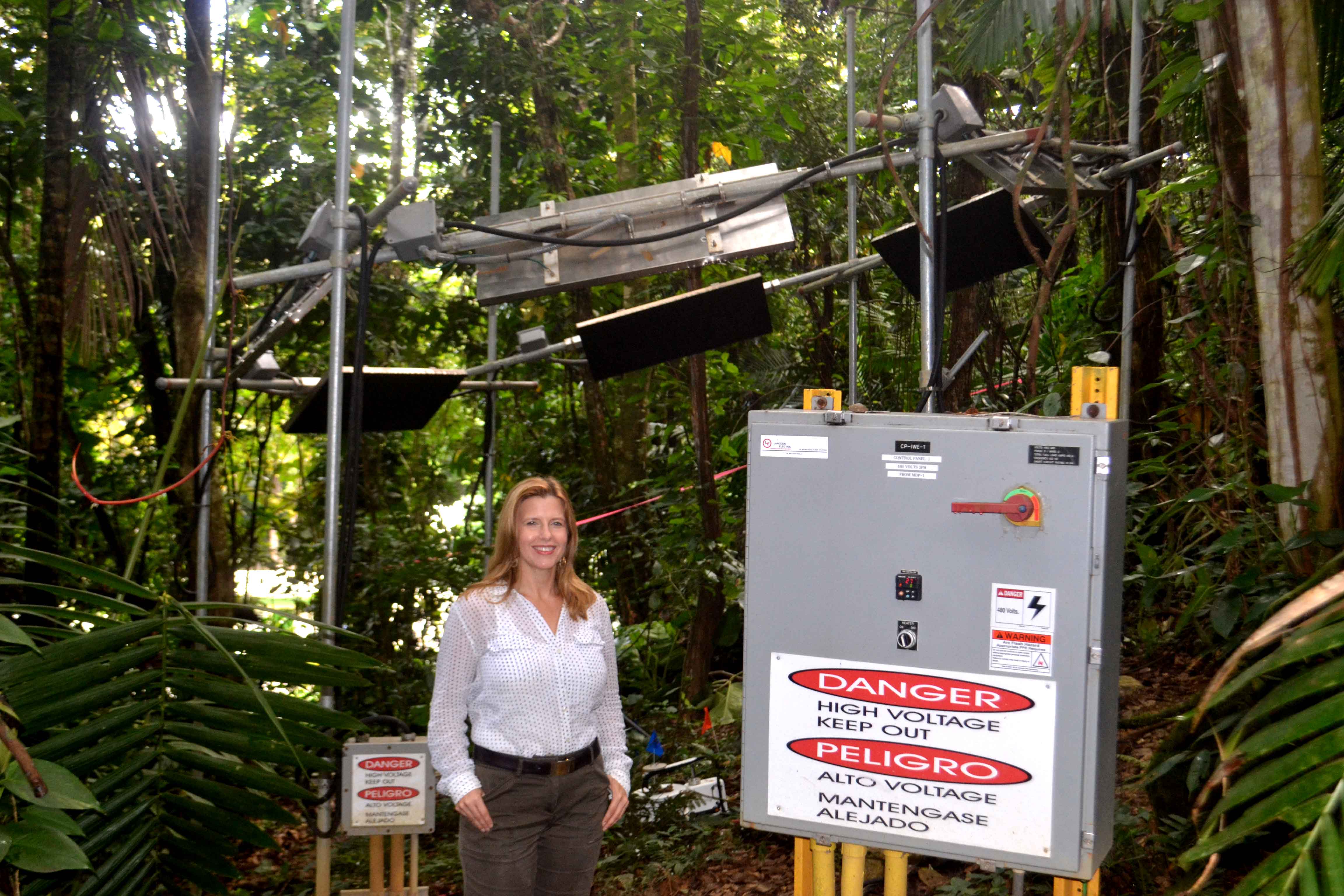 Q. Why are tropical forests, specifically, so important to regulating the temperature of the planet?

A. Although tropical forests occupy just 12 percent of Earth’s land surface, they harbor approximately 25 percent of the world’s biomass and exchange more carbon dioxide with the atmosphere than any other biome, or ecological area. As such, tropical forests have a disproportionately large role in regulating many of the processes critical to maintaining the global carbon cycle, as well as global climate regimes.

Currently, tropical forests take up slightly more carbon dioxide than they release back to the atmosphere. It is possible that in a warming world this trend could reverse, resulting in net carbon emissions from these regions.

Understanding how warming will affect this delicate balance is critical to predicting future climate, and our project will provide key information toward this goal.

Q. Please describe what your project physically looks like. Space heaters in the forest?

A. We have six study areas that are about the size of a 15-foot trampoline. Surrounding each area we have a hexagonal array of six infrared heaters that are supported on metal posts, which are directed inward to create even warming.

Q. What has your typical day been like, setting up this experiment and now maintaining it?

A. This experiment is not only the first to be established in a tropical forest, but is also the wettest site (3.5 meters of rainfall per year on average) ever warmed. There is no manual for the infrastructure that we put in place and while we were confident in our design, we had no guarantee that the system would work exactly as planned.

As such, I would say there hasn’t really been a typical day, but rather various stages of project development, each with a steep learning curve.

In the early phases, much of my time was spent overseeing the construction of the project. We installed a new substation to accommodate the increased power demand, brought power lines into the forest, and installed the posts and heaters for the project.

Once installed, we had to do a substantial amount of troubleshooting to combat power surges, humidity and mold within our equipment, and to also ensure that we had safety measures in place so that we have a safe working environment.

We then moved into the research development phase, where we installed instruments to measure environmental conditions (e.g., moisture and temperature), collected plant physiological data and determined the number of samples we could sustainably collect from our sites to analyze for roots, soil carbon and nutrients and microbial community composition. We spent a year collecting pre-treatment samples, and now that the experiment has started, we are continuing to collect measurements, but have added more system checks to ensure that everything continues to run smoothly.

Looking to the future, we will be processing samples in the laboratory, analyzing data and publishing our results, as well as managing the day-to-day operations.

Q. By how many degrees Fahrenheit are you cranking the heat? At what point in the future could such a temperature actually occur in the forest as a result of global warming?

A. We are warming 7 degrees Fahrenheit, which could be a reality within the next century, depending on the climate projections used. However, I think it is important to highlight the fact that our experiment is not designed to simulate future climate. The future depends on numerous factors, such as technological advances that reduce emissions.

In addition, changes in temperature are likely to be accompanied by changes in other environmental conditions, such as precipitation patterns and the concentration of carbon dioxide in the atmosphere. It is therefore difficult to know with certainty which climate change scenario should be simulated.

What we can do, however, is evaluate key ecosystem responses to increased temperature in a controlled experiment so that we gain a mechanistic understanding of how tropical systems are likely to respond to warmer temperatures. We can then work with global modelers to evaluate and predict the combined effect of these responses on future climate.

Q. Once you’ve finished the experiment and have analyzed your data, what will scientists know that simply could not have been known without this project?

A. There is evidence to suggest that tropical forests could be near their optimum temperature, beyond which we might expect the uptake of carbon dioxide by these forests to decline.

Tropical forests already exist at the warm end of the temperature spectrum, with more than 88 percent of tropical forests experiencing mean annual temperatures of 68 degrees Fahrenheit and warmer. As such, even small increases in temperature will shift these systems toward an entirely new temperature regime.

This means that our ability to use natural temperature gradients to answer these questions is limited. By experimentally warming understory plants and soils in place, our study will address the question of how sensitive these systems are to increased temperatures, but will also explore the potential for plant and soil processes to acclimate over time.

Q. How well did your graduate studies at UVA prepare you for this project, and for the career you’ve chosen?

A. I received my degree from the Department of Environmental Sciences, which is a strongly interdisciplinary department. I was required to take courses in all of the key areas (geology, atmosphere, hydrology, ecology). I shared offices with students from other disciplines and our department seminars brought a wide range of scientists to present their research. My education in the fundamental theories, methodology and vocabulary central to each of these fields has helped me to foster strong collaborations across a wide range of fields.

Furthermore, interacting with scientists outside of my field of expertise exposed me to different scientific approaches and perspectives that have strongly influenced my own research.

I sincerely believe that it was this interdisciplinary education that prepared me to take on a large, collaborative project like the one I am now conducting. I now regularly work with a wide range of scientists in disciplines ranging from atmospheric science, hydrology, plant physiology, microbial ecology, and many more.

In addition, I also work with non-science professionals such as electrical and civil engineers, construction crews, safety managers and electricians. My education provided me with the tools to bridge disciplinary boundaries and my science is stronger, and more relevant for it.

When Less Is More: How Harnessing the Power of Subtraction Can Add to Life END_OF_DOCUMENT_TOKEN_TO_BE_REPLACED