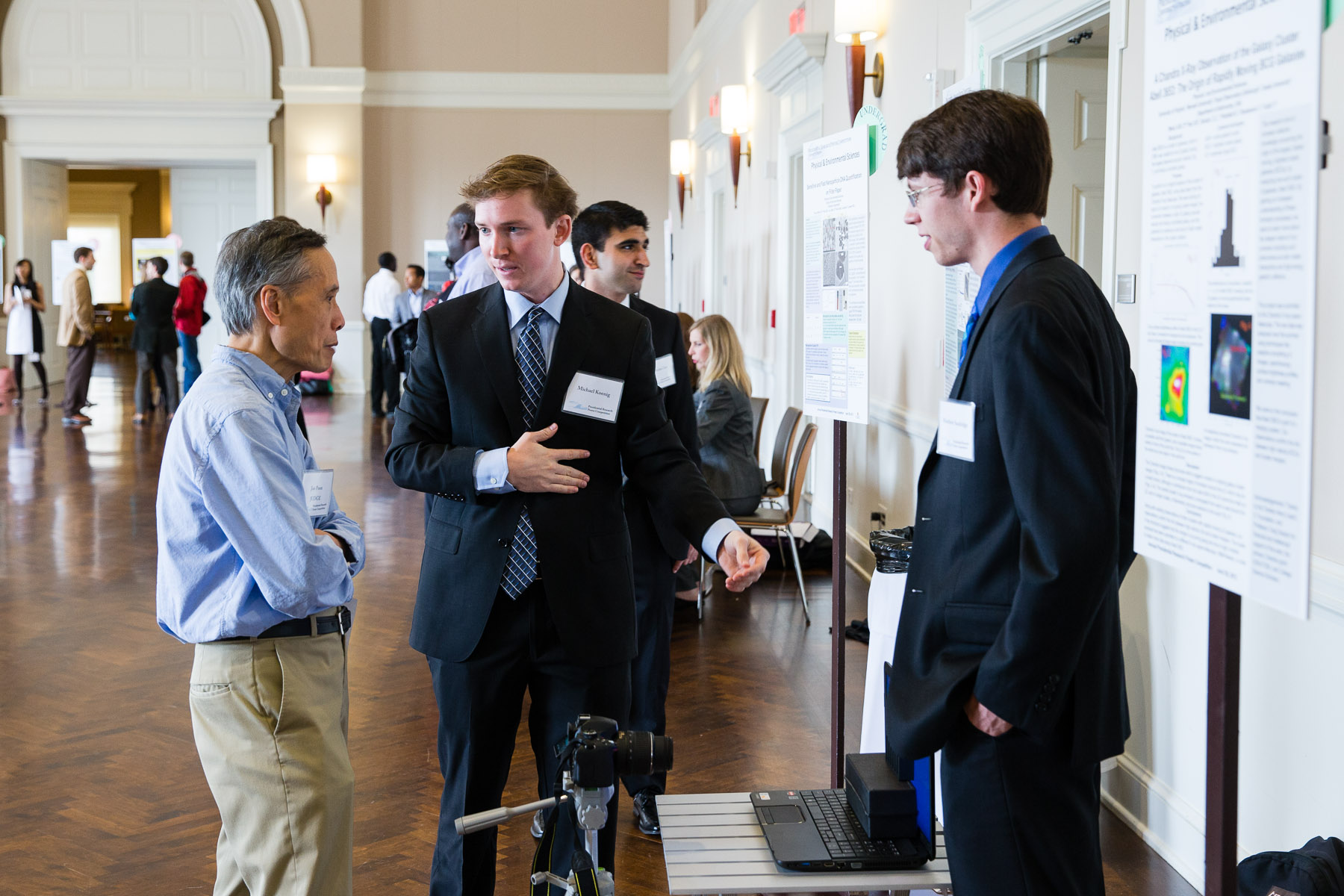 Newcomb Hall Ballroom was abuzz Monday as graduate and undergraduate researchers explained their work to University of Virginia President Teresa A. Sullivan, faculty judges and interested members of the public in the annual Presidential Research Poster Competition, which Sullivan launched in 2011.

Sullivan strolled amongst the student researchers, listening to their pitches and talking with them before announcing the winners, one graduate and one undergraduate in each of seven categories, as selected by panel of faculty judges.

Thomas Skalak, the vice president for research, accompanied Sullivan as she met with the researchers.

"This gathering is a modern version of the Academical Village, with students of all ages and fields mixing together with faculty and President Sullivan to share ideas,” Skalak said. “It is a great pleasure to see the fire in a student's eyes as they guide their audience along the personal path they followed to their creations and research insights. Our nation's future depends on people with the curiosity and know-how to create new value."

The research projects covered topics ranging from basic science to the social and legal worlds.

“I was extraordinarily impressed by the diversity and depth of the research being presented,” said Shayn Peirce-Cottler, an associate professor in the Department of Biomedical Engineering in the School of Medicine, who served as one of the judges. “I was also struck by how effectively and succinctly the students were able to convey not only what they had undertaken to produce their results, but also the overall impact of their work. The projects were as varied as they were thought-provoking, but a commonality in all of the posters was the passion on the part of the students and the long hours they'd obviously dedicated to their research.”

Michael Regan, who will receive a Ph.D. in biophysics in the Graduate School of Arts & Sciences May 19, said he went looking for one thing in his work and found another. With a presentation titled “Structural & Dynamics Studies of the Transcription Factor ERG and the Development of Small Molecule Inhibitors,” Regan was conducting research into leukemia in John Bushweller’s laboratory in the School of Medicine when they found a compound that shows promise for prostate cancer.

“We’re looking at tons of data on the building,” Heekin said. “You can test for anything you want to test and measure it in in real time and see what happens if you change something.”

One of Heekin’s research partners, fourth-year engineering student Rachel Knee, said the poster competition was a good training for presenting their research. “It helps to have to explain it to people,” she said. “It helps to be able to sort of the general ideas.”

Peirce-Cottler also mentored one of the winning teams.

“As the faculty adviser for two of the finalists in different categories, I really appreciated that my students had this unique opportunity to display their findings to a diverse audience,” Peirce-Cottler said. “As anyone who engages in research knows, research requires hard work – so in many ways this award validated the long hours they spent collecting and poring over their data.”

The winners of the competition were:

The winning graduate entry was from graduate student Lissa C. Anderson, and post-doctoral students A. Michelle English and Weihan Wang, under the direction of faculty members Jeffrey Shabanowitz, a scientist in the Department of Chemistry, and Donald F. Hunt, a University Professor in the departments of chemistry and pathology, for “Novel methods in mass spectrometry facilitate near-complete, amino-acid sequence coverage of intact proteins.”

• In engineering, the undergraduate winner was Lark Ariel Washington, a second-year student, for “The Cathodic Kinetics of 17-4 PH Stainless Steel.”

The graduate winner was graduate student Seyed Mohammad Mehdi Saadat for “On the observed tight range of Strouhal number (0.2<St<0.4) among the swimming species in nature,” working under the direction of professor Hossein Haj-Hariri, chair of the Department of Mechanical & Aerospace Engineering.

At the graduate level, the winner was Michael Regan, working in biophysics with several faculty members, including research scientist Peter S. Horanyi, postdoctoral fellow Edward Pryor, postdoctoral fellow, Jessica L. Sarver and David Cafiso, Alfred Burger Professor of Biological & Medicinal Chemistry, and under the mentorship of John Bushweller, a professor in the Department of Molecular Physiology and Biological Physics, for “Structural & Dynamic Studies of the Transcription Factor ERG and the Development of Small Molecule Inhibitors.”

• In the humanities, social, behavioral and economic sciences, the undergraduate winner was Maxim Kuemmerlein, a fourth-year student, for “Mercenary Settlement in the Ancient Mediterranean.”

The graduate winner was David Dobolyi for “Confidence and Eyewitness Identification: Does the Choice of Scale Matter?,” under the direction of faculty member Chad Dodson.

The graduate winners were Rosalyn Keesee, Lucas Lyons and Elizabeth Russell, all second-year Master of Urban and Environmental Planning graduate students, for “Building New Prosperity in the Coalfields,” under the direction of associate professor Suzanne Morse Moomaw.