Austrian Ambassador: ‘We Will Probably Have to Get Used to Longer Periods of Crisis’ 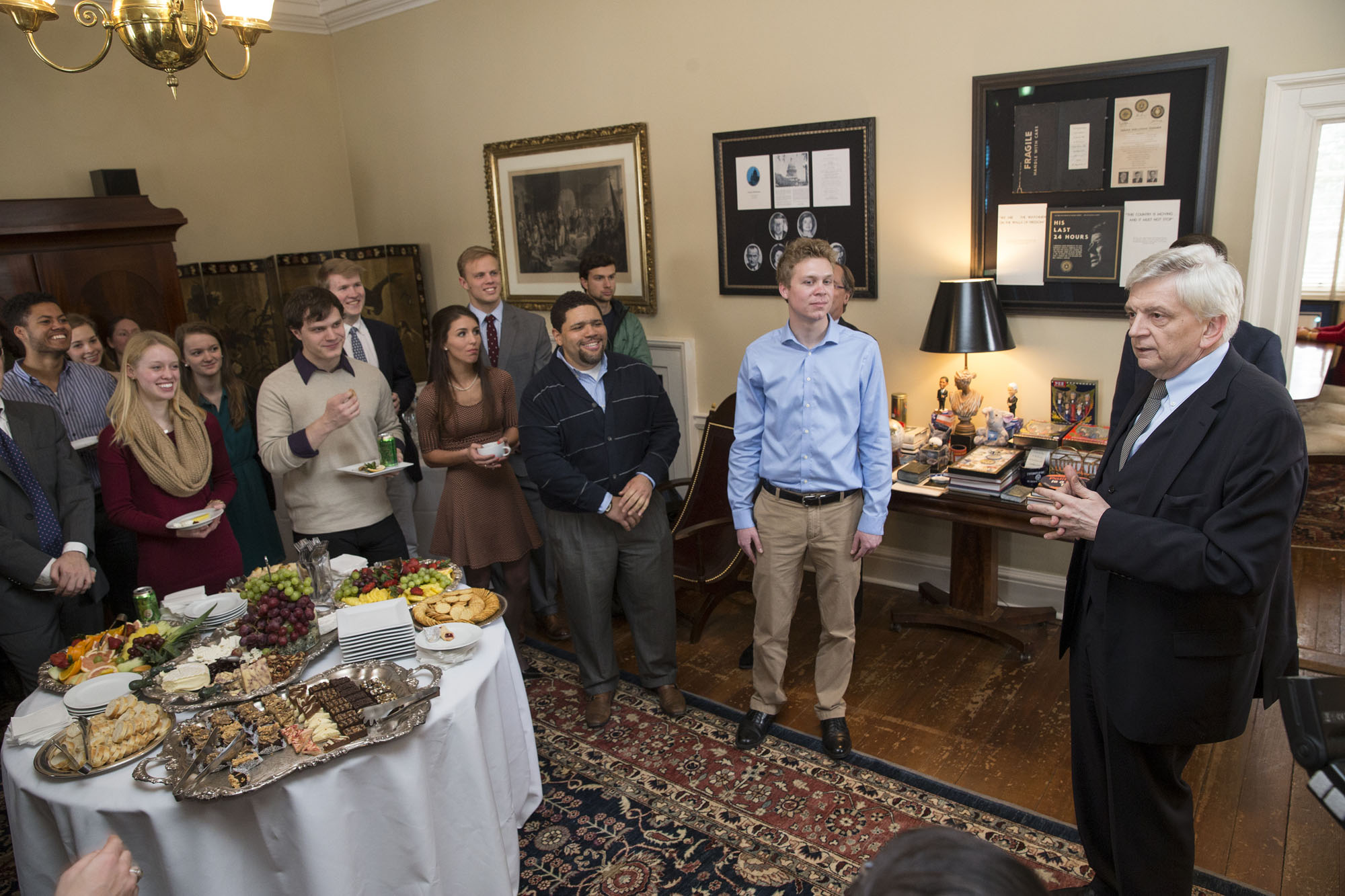 Americans might find themselves a tad confused about the nationality of an ambassador who spoke on Grounds on Thursday. He was born in Australia, but he is actually Austrian.

Born to Austrian diplomats while they were stationed Down Under, Hans Peter Manz, the Austrian ambassador to the United States, visited the University of Virginia Thursday afternoon, giving a public talk in the auditorium of the Albert and Shirley Small Special Collections Library.

Manz discussed contemporary European-American relations and the current challenges facing the European Union and the United States, such as the ongoing conflict in Ukraine and confronting the Islamic State. He emphasized the shared values of the U.S. and the EU, but worried that because of the rise of Asia, particularly the growing importance of China and India, the United States had to some degree turned its attention away from the transatlantic partnership. This trend has manifested itself, for example, in cuts to American cultural outreach efforts to European nations, including Austria, since the end of the Cold War.

Among the many transatlantic issues of importance, Manz emphasized the importance of concluding negotiations for the Transatlantic Trade and Investment Partnership, a free trade agreement currently being worked out between the United States and the EU. If the two sides are unable to hammer out an agreement, Manz fears that “we will play by the rules of others, rules that may be far less liberal.”

According to Manz, a proposed Transpacific Partnership agreement being worked out between the U.S. and Asian nations is getting more attention in American circles than TTIP, particularly in debates over free trade. TTIP talks are especially being delayed by the going back-and-forth over the rules pertaining to genetically modified organisms, with many Europeans holding strongly anti-GMO views while American agriculture produces a great deal of genetically modified foods.

The ambassador also criticized what he described as the media’s inability to handle nuance and complexity. Manz said news outlets often dumb down proposed solutions to problems or claim to know how to fix a problem that is incredibly complicated in a way that does not help the public understand what is going on.

Addressing the many challenges of the day, particularly the conflict in Ukraine and the threat of the Islamic State, Manz argued, “We will probably have to get used to longer periods of crisis. In a world that expects quick solutions, that is a difficult sell.”

Austria made international news this week when its parliament reformed a century-old law regarding Islam. Critics of the move claimed the adjustments demonstrated distrust toward Muslims. First passed in 1912, the law made Islam an official religion in what was then Austria-Hungary. The new reforms ban foreign funding for mosques and imams – limitations that do not exist for Christian or Jewish institutions. But the new legislation also includes protections for Muslim holidays and instruction for imams. Muslims make up approximately 6 percent of Austria’s population of 8.6 million.

Asked about the controversial measure, Manz said the law needed updating after a century of being unchanged. In Austria, what are known as “state-church laws” govern other major religious groups. Manz said that a challenge with Islam in Austria is its lack of a central Austrian authority, unlike other larger religious groups, such as Catholics or Jews.

Muslim organizations were aware of efforts to alter the law governing Islam in Austria, but a few were faced with potential problems because of the foreign funding ban, prompting some of the blowback over the reform. Manz argued that the law is meant to make the Austrian Islamic community firmly Austrian and to prevent it from being influenced by, or exerting influence on behalf of, foreign actors who may be pushing hateful beliefs. Manz thought it was a good sign that the major groups felt it was the best possible compromise at this time, with the far left and far right finding the most problems with the changes.

The ambassador’s visit was hosted by the U.Va. Center for Politics in partnership with the Center for German Studies. Prior to the public event, Manz met with students, faculty and others at a reception in Pavilion IV on the Lawn.

Manz’s talk was a part of the Center for Politics’ Ambassador Series, which brings foreign ambassadors and high-level officials from other countries to Grounds to offer the University community different international viewpoints on the global issues and challenges of our time. The series is coordinated by the Center for Politics’ Global Perspectives on Democracy program, which fosters dialogue between the United States and other countries through public events and international exchanges meant to increase civic participation and engagement.

The event was also part of the Center for German Studies’ interdisciplinary conference about author Franz Kafka, which concludes today.

Monkeypox Is Spreading, But University’s Risk Believed To Be Low END_OF_DOCUMENT_TOKEN_TO_BE_REPLACED

Q&A: Assessing the Risks and Rewards of Pelosi’s Plan to Visit Taiwan END_OF_DOCUMENT_TOKEN_TO_BE_REPLACED

These Giant Wind Turbines, Inspired by Palm Trees, May Be the Future of Renewable Energy END_OF_DOCUMENT_TOKEN_TO_BE_REPLACED