Author John Grisham Urges Class of 2007 to Savor the Moment 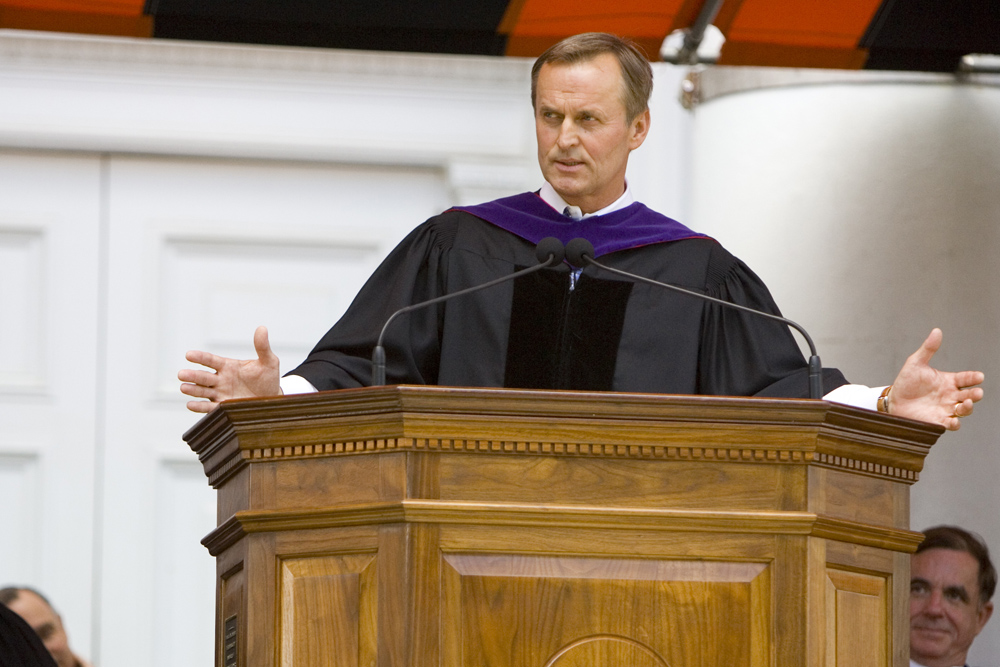 May 20, 2007 — The University of Virginia’s Class of 2007 received a picture-perfect send-off on Sunday, urged by acclaimed author John Grisham to “Savor the moment, savor the day, because it cannot be repeated.”

The weather was ideal, with mostly clear blue skies offsetting the brilliant green of the grass on the Lawn, well watered by Friday’s rains. The temperatures rose from the 50s in the early morning to the 70s by midday.

The crowds rose, too. By 7:30 a.m., 2 1/2 hours before the academic procession stepped off, central Grounds buzzed with activity. Graduates, already draped in their gowns, smiled widely for camera-wielding relatives. Other families searched for one another as they sought the best vantage points. “I don’t know where I am,” one father said into his cell phone. “Where are you?” Already, the tantalizing aroma of grilling hot dogs filled the air from the numerous food booths around the periphery of the Academical Village.

On the Lawn sat Jennifer Leber, who had traveled a long way to see her son, David, take his bachelor’s degree in classics. She and her husband, Philip – himself a U.Va. alumnus – are Anglican missionaries in Uganda. On Sunday, they arrived at 5:50 a.m. to stake out prime seats on the front row of the spectator section, right on the central aisle, then left Jennifer to safeguard them.

“Only a mother will do this,” said a smiling Leber, wearing a light coat and gloves to ward off the morning chill. “It’s the devotion of a mother.”

By 9 a.m., the graduates and faculty members began massing on the north side of the Rotunda, a sea of black gowns punctuated by brightly colored, helium-filled balloons in a variety of shapes and sizes — cartoon characters, a palm tree, a lobster, a flock of pink flamingos.

A fanfare from the Ft. Lee Army Band heralded the start of the hour-long academic procession down the center of the now-packed Lawn. High-fives crackled as the soon-to-be recipients of MBAs from the Darden Graduate School of Business Administration arrived and filled their rows of seats near the stage. Mercifully, a breeze kicked up to cool the black-clad ranks.

The ceremony began with a Pledge of Allegiance and the national anthem, followed by a moment of silence for the victims of the April 16 shootings at Virginia Tech. A few in attendance wore maroon and orange ribbons in their memory.

Vowing to keep his remarks short and to limit his advice — “It’s easy to give, easy to digest, but it’s rarely followed,” he said — Grisham, apparently speaking without notes but with frequent doses of humor, offered instead three lessons that he learned in the three decades since his own graduation from Mississippi State University in 1977.

Back then, he said, he had planned his whole career as a tax attorney. “The idea of writing a book had never crossed my mind,” he said. “I had never written anything that wasn’t required for school.”

Thus, his first lesson: “You cannot plan your life,” he declared. “Dreaming is a worthy pastime. Planning is a waste.”

His second lesson was based on his memories of the deadly toll that the Viet Nam War took on his generation. Noting that everyone in the Class of 1977 knew someone who had been killed in Vietnam, Grisham said, “We were told it was necessary to protect our interests….We were told we were winning and winning and winning and more troops were needed. As the war dragged on and grew worse, so did the lying.

“Lesson number two: When politicians get the itch to go to war, don’t believe what they say.”

Finally, he observed that much of the same rhetoric he heard during the energy crisis of the 1970s is still heard today, with the added looming threat of global warming. “Lesson number three: Your generation must have the courage to save the environment, because the previous generation did not.”

In preparation for his speech, Grisham said he found a study that predicted that a graduating class the size of U.Va.’s would, on average, produce 42 future commencement speakers. To help identify them, he reviewed a list of graduation speakers nationwide this year and offered three common elements he found in their backgrounds: talent, which he defined as “the ability to discover what you do well, and to do it every day”; the perseverance to overcome rejection and failure; and luck — “not necessarily blind luck, but more importantly the ability to spot an opportunity you weren’t looking for.”

Grisham, who lives in the Charlottesville area, concluded by noting how the arrival of the students each fall brings the town to life. “Now you guys have to leave,” he quipped. “You can’t stay here until you’re 30. Life doesn’t work that way. In about three months — August 25th, to be exact — the freshmen are coming to replace you.

“You have to leave now. You have been superbly educated. Go forth, and start working on your speeches.”

After highlighting the accomplishments of a handful of members of the graduating class, Casteen symbolically conferred the degrees, with each school’s candidates standing and cheering as they were presented by their respective deans.

Casteen concluded the ceremony with his own words of advice to the class. “If we have done right by you, you already have absorbed some of [Thomas] Jefferson’s qualities of tough-mindedness, of imagination, of determination to effect change within the rule of law, of optimism,” he said.

“You will have developed some measure of his courage and conviction, the will to confront falsehood and evil in discourse, the bravery to assert what is true and good. Take these with you.”

Shortly thereafter, the class — and the crowds — scrambled to dozens of separate diploma ceremonies, where graduates picked up some 5,900 degrees, including 3,367 baccalaureate degrees, 2,027 graduate degrees and 506 medical and law degrees.