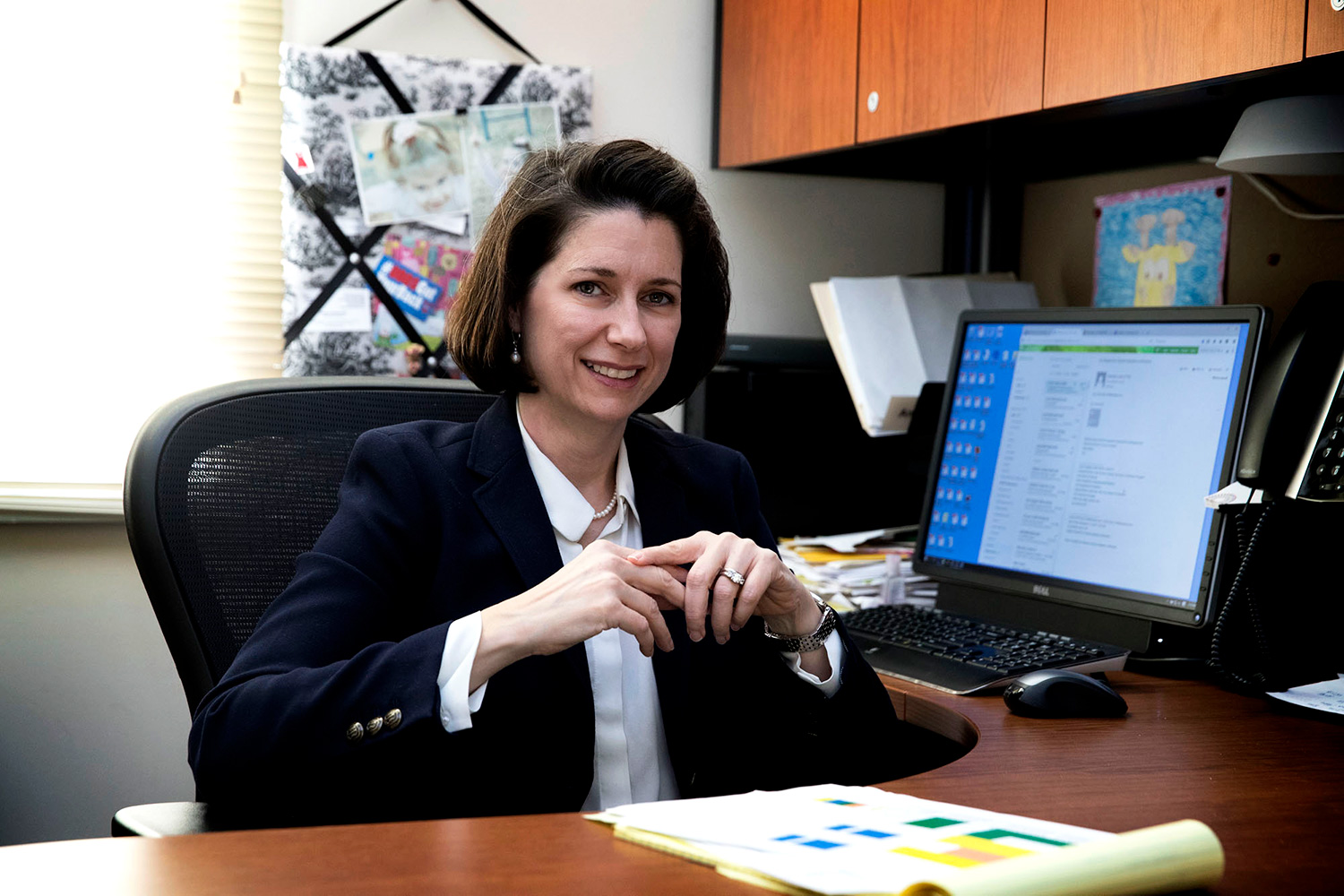 From the front of her classroom inside the University of Virginia’s McLeod Hall, Assistant Professor of Nursing Amy Boitnott spends several mornings each week lecturing to her students about practices and protocols common to pediatric care.

Boitnott is beloved among her peers as well as her students, many of whom claim she has a profound ability to resonate with them and that she is a constant source of inspiration.

“Dr. Boitnott’s clinical knowledge, paired with her empathetic nature, makes her an example for me and my peers to follow. She begins class each Monday with five minutes of sharing what we are grateful for,” said Alice Xie, a former student in Boitnott’s pediatrics course. “Personally, she has inspired me to consider teaching in my future. I keep a note on my laptop of what kind of professor I want to be in the future, and many of those points are taken from her teaching practices.” 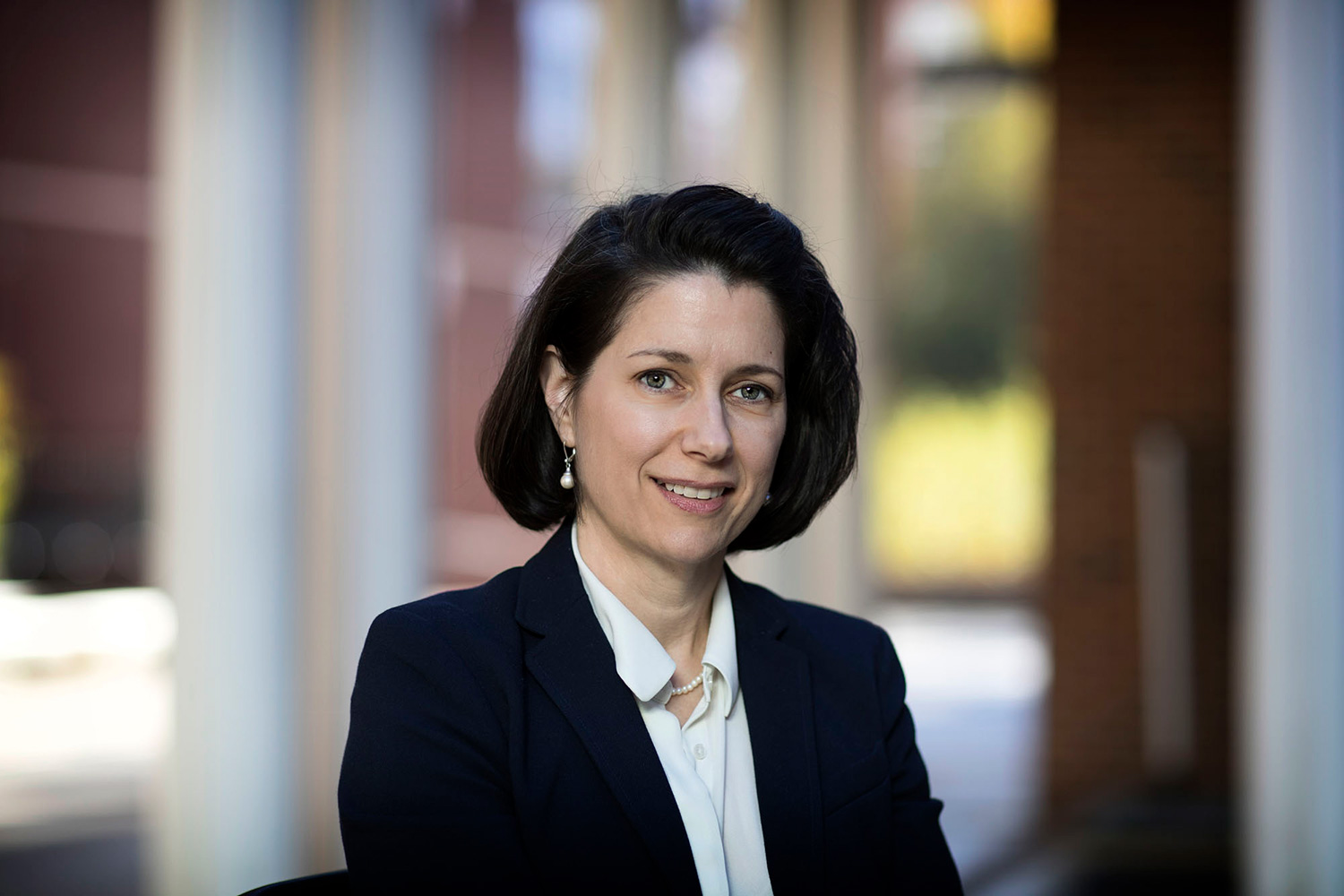 When class time is up, Boitnott, who keeps her balance steady by maintaining a sturdy grip on her podium, watches her students file out of the room. Then, she lowers herself onto her scooter and makes her way back to her office to tackle the next task of her day.

“To teach a class is very taxing,” Boitnott said. “My body has to choose: I can either keep myself upright and balanced, or I can talk. It can be exhausting, so I use a scooter to get to and from class because I really can’t walk after I teach.”

Boitnott said an MS diagnosis wasn’t the only unexpected twist of fate she encountered in her adult life, though.

“When I graduated from nursing school (at James Madison University), I wanted nothing to do with kids and nothing to do with critical care,” she said. “Then, I ended up in the Pediatric Intensive Care Unit at UVA. It was a really, really great mistake.”

Not only did Boitnott find her life’s calling in the Pediatric Intensive Care Unit, but that’s also where she met her husband, Rich, a UVA graduate who works as a critical care nurse. Boitnott has been at UVA since her days as a newly graduated nurse in 1991, and she says it has become a place where she has not only grown in her career, but also found support when she needed it most.

“I found a place I liked,” Boitnott said. “UVA worked for me, so I stuck with it.”

Boitnott earned her family nurse practitioner degree from Virginia Commonwealth University in 2000 before taking some time off to start a family. In 2005, after becoming a mother to three daughters, Abby, Grace and Ellie, she decided it was time to make her return to work as an instructor at UVA. But Boitnott was in for a surprise just as she was preparing to officially take on that role.

“Lo and behold, two weeks before I took my full-time job here, I was admitted to the neurology floor because my leg stopped working all of a sudden,” Boitnott said. “That’s when I was diagnosed with MS.”

While it wasn’t the news she had hoped for, Boitnott said she at least had timing on her side.

“You don’t have a choice in life,” she said. “I was really very blessed that this job came when it did because I don’t have to run around a hospital and I’m able to teach.”

Despite the diagnosis, Boitnott enrolled in UVA’s Doctor of Nursing Practice program, the first of its kind in the state, while maintaining her role as a part-time instructor. She became the program’s first graduate in 2008, and then went on to earn a post-master’s certificate as a pediatric nurse practitioner from UVA in 2012.

Boitnott also continued to serve in a clinical capacity at the former Kluge Children’s Rehabilitation Center until 2013, and though she’s no longer working on the hospital floor, Boitnott still provides care to patients in need through volunteer opportunities. Last summer, she spent two weeks as a nurse practitioner at Camp Holiday Trails in Charlottesville, which serves children with special health needs.

Now, with her focus on guiding her students on their paths to becoming the best caregivers they can be, Boitnott is eager to use her own experiences and perspectives to help shape the future nurses who come through her classroom.

“I have 26 years of experience caring for children,” Boitnott said. “I really love sharing my expertise first of all, but my compassion most of all.”

Boitnott said she knows she’s struck a chord with her students when she witnesses evidence of compassion in their actions.

“If I fall on the floor, they have to pick me up,” she said. “But it’s OK; we all need help in this world. It doesn’t mean I’m a weak person; I just have a weak body. I have a strong passion and a strong attitude about life, though, and I really hope my daughters and my students have seen that resiliency.”

Boitnott said she began to realize the magnitude of her impact when a student shared an honest confession with her about how she taught him to not pass judgment based on appearance.

“At first, that student thought ‘I got the disabled professor, the one who can’t walk,’” Boitnott said. “But now he knows he got the one who’s passionate about caring for kids. And that’s what I hope I’m remembered for.”

According to Dorrie Fontaine, dean of the School of Nursing, that is indeed the legacy that Boitnott has created.

Boitnott admitted that as her disease progresses and her ability to walk worsens, some may see quitting her job and staying at home as a viable option.

“But that wouldn’t be living,” she said. “So I’m glad Dean Fontaine allows me to live here and that my husband and kids make up an amazing support system. What I’m doing is not that remarkable; it’s just what life gave me.”

Here Is What You Need to Know About the New Coronavirus Variant, Omicron END_OF_DOCUMENT_TOKEN_TO_BE_REPLACED

Fall Is in the Air on Grounds END_OF_DOCUMENT_TOKEN_TO_BE_REPLACED

Meet the Cats and Dogs Your CVC Donation Supports END_OF_DOCUMENT_TOKEN_TO_BE_REPLACED