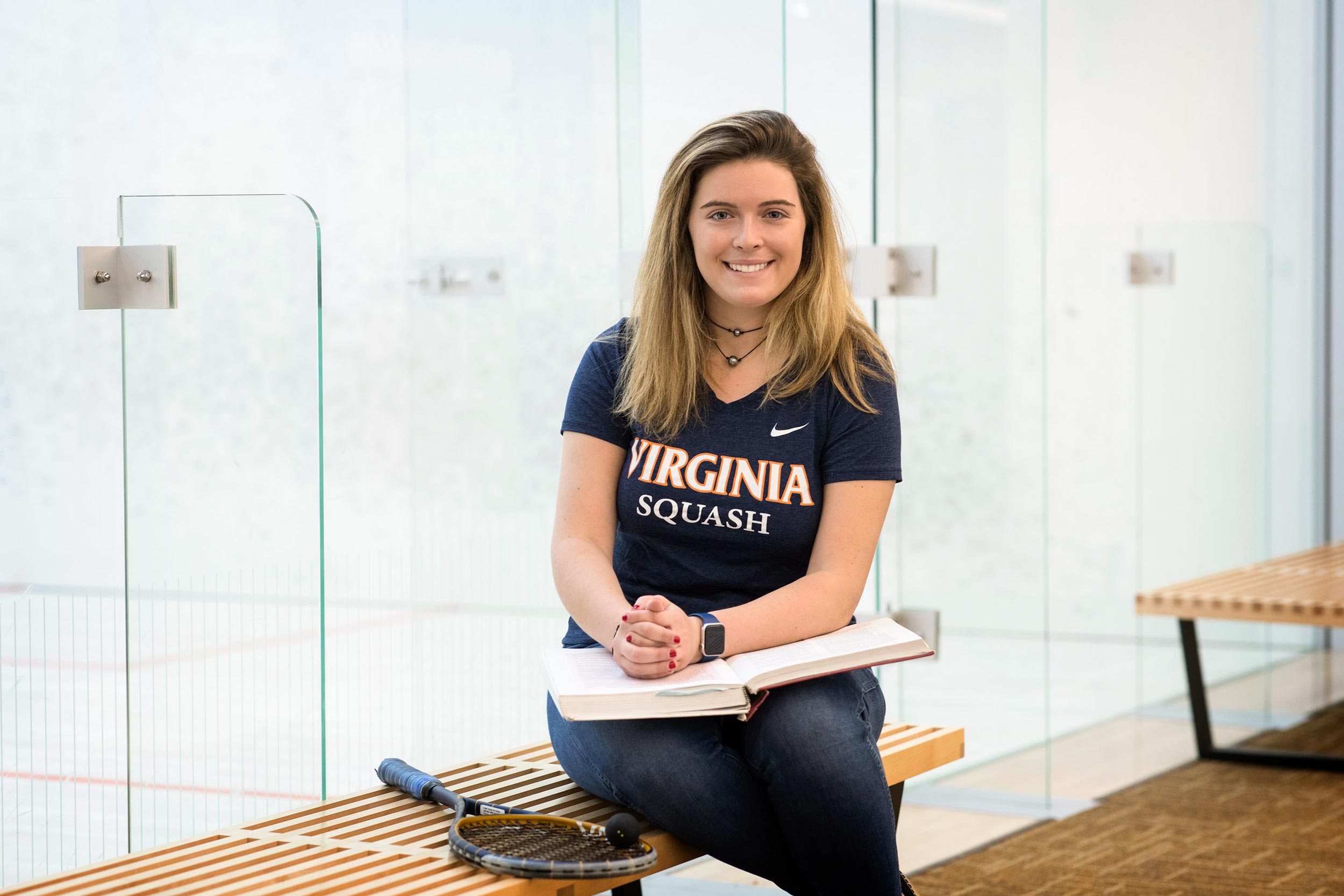 With a piece of paper and a Crayon, a young Madeleine Mayhew jotted down a sentence that would guide her decisions through elementary school, middle school, high school and, eventually, college.

It was scrawled during a Sunday school class when a teacher asked Mayhew and other children to make a promise – in writing.

Mayhew wrote, “I promise to love my life.”

“It was like, ‘Wow, where did that come from?’” recalled Elizabeth Mayhew, Madeleine’s mother. “But that has kind of always been her mantra.”

It’s what led Mayhew, a standout squash player from New York City, to the University of Virginia.

Mayhew sought a college where students seemed to have a good work-life balance. A school where she wouldn’t feel bound by traditional degree requirements. And a school with a highly competitive squash program.

Four years later, the Echols Scholar said she succeeded on all counts.

“I think the cool thing about UVA is you really feel a sense of love of the school when you’re here,” said Mayhew, sitting near a court at UVA’s McArthur Squash Center this week. “That was something I wanted explicitly for my college experience. I wanted to feel like everyone was really happy at the school they were at.

“During my four years, I’ve had the chance to visit friends at various institutions around the country and even internationally, and I have never felt that another university comes even close to the sense of uniform happiness that I see at UVA. And when my friends visit me here, they are completely in awe of how perfectly balanced everyone seems between school, social and, for me, squash.”

UVA head coach Mark Allen said he feels beyond fortunate that Mayhew – whom he had passed over during the recruiting process in favor of other players – came to UVA anyway.

“I can truly say that had Maddie not ended up here and on this team, it would have been the single biggest mistake of my coaching career,” he said. 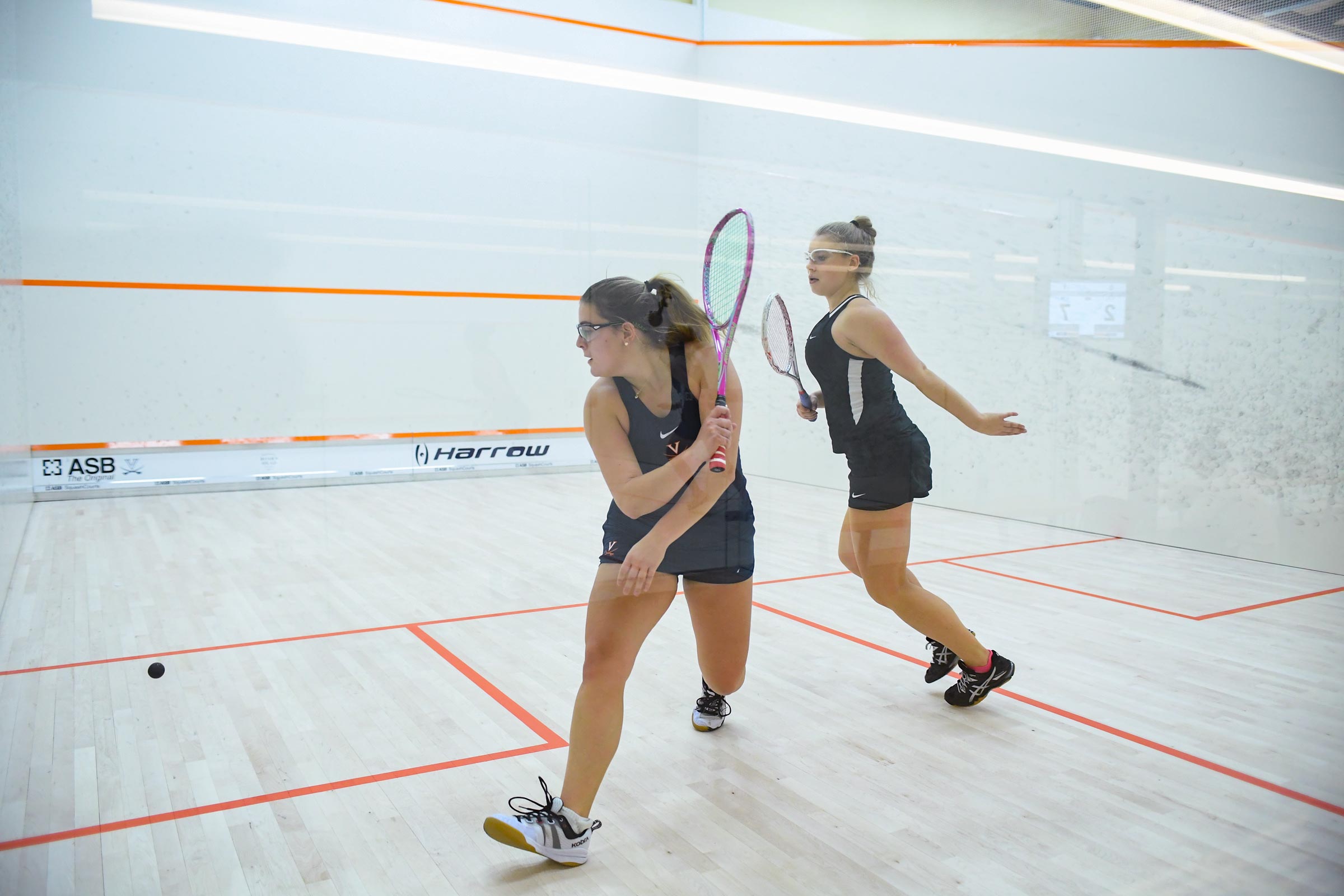 Mayhew is an Echols Scholar double-majoring in public policy and leadership and history. (Photo by Pete Emerson, UVA Athletics)

As a co-captain this season, Mayhew helped lead the program – now in its second year as a varsity sport –to a final ranking of No. 11 in the country, up two spots from last season.

Allen said Mayhew’s “infectious personality” lifted not only players’ spirits time and again, but even his own.

In a match against Bates College when she was a first-year, Mayhew played through an illness (later diagnosed as mononucleosis) in leading UVA’s club team to one of its biggest wins.

“It’s not a moment I would ask any of my players to emulate,” Allen said, “but I use it now as a perfect illustration of just how much of herself Maddie has been willing to give.”

“Maddie puts the emotional well-being of others before herself, which can take a serious toll on most people,” said co-captain Annie Tyson, “but Maddie met the challenge daily with incredible poise.”

Mayhew, who attended Phillips Academy Andover in Massachusetts, puts the same kind of effort into her academics. As an incoming first-year, she was accepted as an Echols Scholar.

“I’ve always felt like a true scholar-athlete here, not an athlete-scholar,” Mayhew said. “I’m at school for school, and squash has actually been what’s supported me in school. I always do better in school when I have squash.”

It was with that in mind that Mayhew decided to pursue an ambitious academic plan.

Faced with a choice between a major in the Frank Batten School of Leadership and Public Policy and the Distinguished Majors Program within the Corcoran Department of History in the College of Arts & Sciences – both of which she had been accepted into – Mayhew decided to do … both.

“Batten is really forward-looking – a lot of it is thinking about policy over the next 25 years and what will be important to our generations – whereas history is looking behind and kind of examining cycles and processes and how they might be repeated in the future,” Mayhew explained. “And so when you combine the two together, I think it offers a really interesting perspective as to why things are the way they are right now, and whether they’ll repeat themselves in a slightly different iteration.”

Mayhew recently completed a 108-page history thesis on sisters Sarah Moore Grimké and Angelina Grimké, the only known white Southern women to have been a part of the abolitionist movement. “Most historians say that women’s rights were founded in 1848 by Elizabeth Cady Stanton and various other women’s rights advocates at Seneca Falls,” Mayhew said. “My thesis makes the argument that that’s false.”

“When writing a thesis, what’s important is clarifying your research question,” Mayhew said. “If I hadn’t had some of the skills in Batten, I would not have been able to do that.

“Batten teaches you not just qualitative skills, but quantitative skills. So you do statistics, you do economics, but at the exact same time you really learn how to write and ask questions and how to structure your writing in a way that’s clear, concise, to the point, argumentative. I think, more than anything, you learn to ask the hard questions, which are skills that are directly translatable to history and writing a thesis.”

While Mayhew said she can’t put a price on the things she’s learned in the classroom, her experiences outside of UVA have been just as valuable. She has had summer internships with Us Weekly, an Ariana Huffington start-up company called Thrive Global and Bloomberg Media. Mayhew said the internships have shown her what she may, and – just as importantly – may not want to pursue in the way of careers following graduation.

“In all three of the experiences, I loved the people I worked for,” said Mayhew, who sat in on meetings with Huffington the summer after her second year. “I got to interview some of the most incredible people I’ve ever met, including Kevin Rudd, Larry Summers and Kai-Fu Lee. It was just a great combination between policy, history and journalism.”

Journalism runs in the family. Elizabeth Mayhew worked for a number of magazines – including REAL SIMPLE, House Beautiful, Southern Living and Woman’s Day – and now contributes as a lifestyle expert for NBC’s “Today” show and writes columns for the Washington Post.

“She’s been such a role model for me in how to manage everything simultaneously,” Madeleine Mayhew said. “She’s just an incredible example of someone who can seemingly do it all. I’ve always strove to emulate that in whatever I do.”

“I would tell you a billion times over that UVA was not only the perfect place for her, but that it totally exceeded both her expectations and our expectations in every way,” she said. “The one thing I say to people who ask me about UVA is that is has so many interesting programs. I think people come down and look at the campus and look at the whole, but they don’t look at the parts. I think it’s the parts of UVA that make it so interesting. There are just so many incredible options with fantastic faculty.”

While Madeleine is hoping to work for Bloomberg after she graduates, Elizabeth Mayhew would just like everything her daughter does moving forward to trace back to that fateful sentence she wrote down in Sunday school.

"We all spend too much time working to not be really happy with what we’re doing. … I just hope she loves whatever she does.”

When Less Is More: How Harnessing the Power of Subtraction Can Add to Life END_OF_DOCUMENT_TOKEN_TO_BE_REPLACED