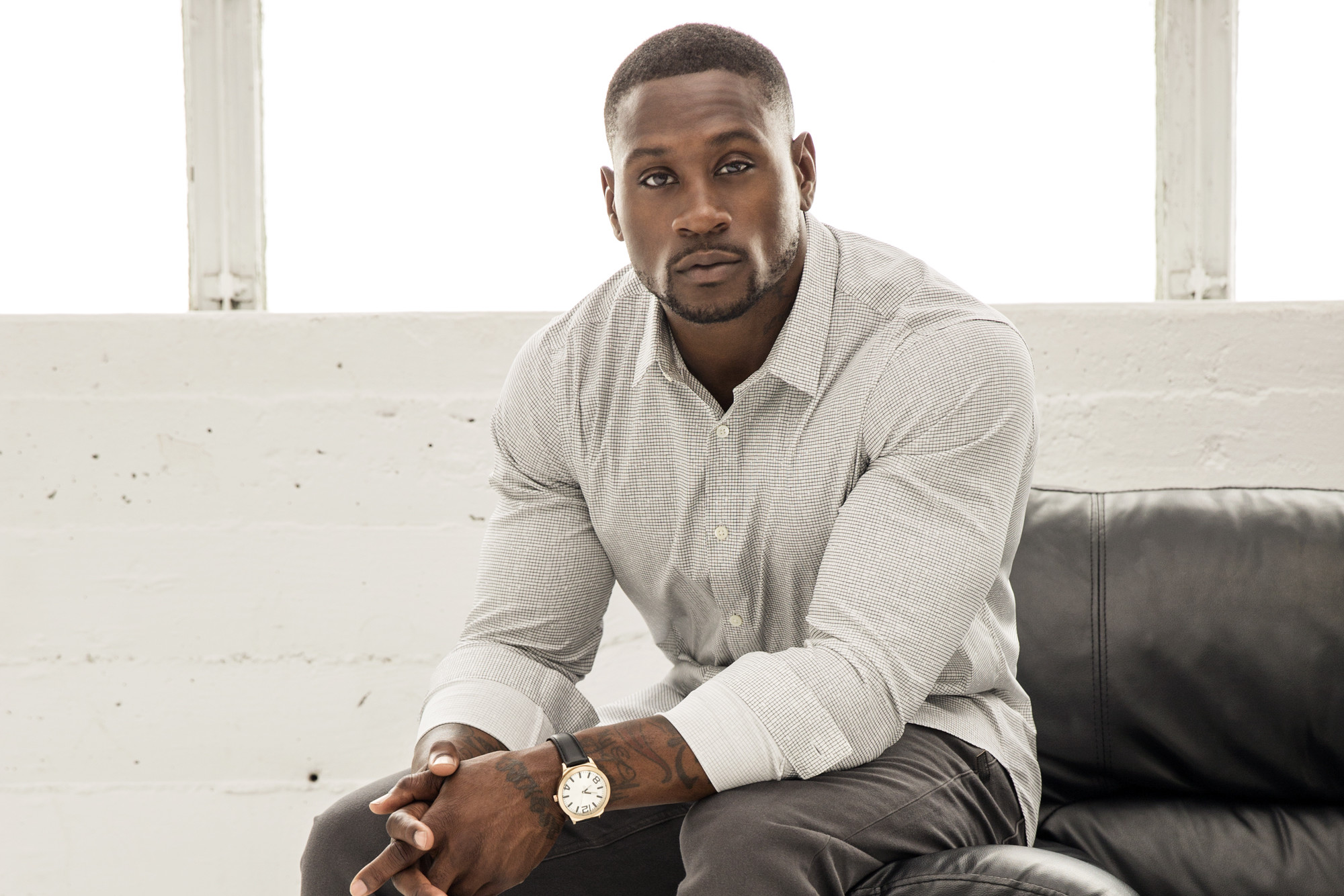 The sounds of weights clanging together could make it nearly impossible for the average person to concentrate and hold a conversation, but for Thomas Q. Jones, it’s all in a day’s work. Jones is calling from the gym, where he’s squeezing in a workout (and an interview) before he begins another busy day.

Jones, a 1999 graduate of the University of Virginia’s College of Arts & Sciences, was one of the best tailbacks in the history of UVA football. The Cavaliers’ all-time leading rusher, he was an All-American in 1999 and finished eighth in the balloting for the 1999 Heisman Trophy, awarded to the nation’s best college football player. Selected by the Arizona Cardinals in the first round of the 2000 National Football League Draft, Jones went on to play professionally for five teams in 12 seasons.

For Jones, playing in the NFL was like being a superhero. “You’re like Batman,” he said.  “[The fans] see you do all these great things on the field, but no one sees your face until you take your helmet off.” As a result, Jones felt his fans knew of him, but didn’t really know him.

That all changed when Jones was cast last year in the BET series, “Being Mary Jane.” His fan base exploded beyond football and now includes men and women who get to see his face and watch him display a range of emotions as an actor. He said he’s enjoying the experience and is excited that he’s seen as an actor and not “a football player trying to act.”

It’s a big feat for a kid who played high school football on a much smaller stage at rural Powell Valley High, in Virginia’s smallest classification. He described his upbringing and that of his six siblings as “rough,” but full of love and support. Parents Betty and Thomas emphasized the importance of education, and all seven Jones children graduated from college, including three younger sisters who followed Thomas to UVA: Knetris (a 2003 alumna), Knetta (2006) and Katrice (2011).

We’ll next see Jones, now 36, on the big screen in the upcoming film, “Straight Outta Compton,” before he returns for another season of “Being Mary Jane.” In the meantime, UVA Today managed to catch up with the unmasked man before he ran off to his next audition.

Q. You’re originally from Big Stone Gap, Virginia, population less than 6,000. What was it like to adjust to life on Grounds and playing in the ACC?

A. Coming from Southwest Virginia, it’s beautiful country and a very beautiful part of the state, but it’s overlooked a lot because it’s so tucked away. It’s a small town. It’s kind of like the movie “Friday Night Lights” – everyone loves their sports, especially football.

Going to UVA was a pretty big transition, as far as the number of people. I’ve always been very open-minded and I’d always looked forward to venturing out into the world and seeing what’s out there. Being around that many people, from different parts of the world, was an amazing experience. It was probably the best time of my life and out of everything I’ve done, my experience at UVA was the most I’ve ever grown.

Q. Why did you choose to major in psychology at UVA?

A. I was always a very analytical person. Even as a kid I was very inquisitive, always asking why, why, why. My mother and father would give me answers and I would ask them why they answered a question in a particular way.

Psychology was something I was interested in during high school. I think the mind is really powerful and it controls so many more things than we give it credit for. I studied psychology because I wanted to understand the mind and the way people think and how it affects your overall life.

Q. You’ve talked about how you believe football is more mental than physical. What do you mean by that?

Mentally, being able to play football is different. You have to deal with criticism, the strategy of the game, even from the physical perspective – it’s going to be hot or cold, you’re going to be tired or sore, and you have to push through that. You have to dig deep within yourself to put mind over matter.

Playing at the NFL level is even more mentally tough. It’s more of a chess match. We’re game players. We’re strategically trying to manipulate the other team so we can win. Physically, everyone in the NFL can do the job – that’s why we’re in the NFL – but people who are mentally the toughest, those are the ones that last. And the teams that are the most mentally tough are the ones that win.

A. It was spontaneous, very random. I founded a production company in 2007 and I added a film division to it in 2012. I began by producing a documentary called “The NFL: The Gift or The Curse?” (trailer) as well a TV series based in Miami.

I started acting in the TV series I was producing because I thought it would be fun. I was working with Clifton Powell (an actor well known for his roles in movies like “Ray” and “Norbit”) and developed a relationship with him. He was kind of like a big brother to me and he encouraged me to pursue acting. Honestly, if it wasn’t for him, I probably wouldn’t have pursued it.

I found I was good at it and started taking it seriously about a year ago. Last year, I was cast in a BET show called “Being Mary Jane” as Gabrielle Union’s love interest, and things took off.

I guess it’s unusual for an NFL player to step into that world because being an actor is more than just running and jumping on a set. In football you don’t want to be exposed, you don’t want to be the weakest link, but as an actor, you have to be vulnerable and as human as possible for the fans to react and to like your character. It’s a pretty crazy transition when you’re trained to be a tough, hard-nosed person, and then you come over to acting and you have to let all of that go.

Q. You’ve appeared on “Being Mary Jane” and you’re also in the upcoming movie “Straight Outta Compton.” Did you ever imagine this future for yourself when you were a student?

A. My mind has always been open to things, but I never knew what to really expect. I expected to do some good things. I expected to do things that would inspire others. I don’t think I put any boundaries on what I was capable of doing.

I’ve always been very determined. I’m not really surprised that I’m in this position because I’m spontaneous. I like to travel; I like to experience new things; I like to learn all of the time and I like to grow. I look at my life as a book: this is the next chapter and I want there to be as many chapters as possible.

Q. You’re also CEO of two entertainment related ventures - Independently Major Entertainment (a production company) and a new app called CASTAR (a free tool for finding acting jobs and promoting talent/opportunities). Did your time at UVA prepare you for the career transition to becoming an actor and an entrepreneur?

A. Definitely! The people I met at UVA, the expectations that you have going to UVA – we hold each other accountable, as UVA students and as UVA graduates. We’re everywhere and we’re a family.

It’s funny – I just started working with a new company and one of the executive vice presidents popped into the office and said, “Hey, I just had to say hello to a fellow Wahoo.” I had no idea she went to UVA, but automatically, there’s a connection.

UVA is a very special place and a very special school. There’s a lot of positive energy there. It’s one of those schools where you can think and grow freely. You can be yourself. I think a lot of other universities are more structured, but UVA says, “Hey, be you and be great.”

As UVA graduates, it’s amazing, we’ll always have love for UVA, we’ll always have love for each other. You remember the little things more than anything else, like from your first year and meeting people at Fall Convocation – these are the people you meet when you’re 17 years old and you grow into an adult with them over the next four years and it’s a great experience.

When you leave a school like UVA, you have a sense of pride and you want the best.

Q. What’s your fondest memory of your time on Grounds?

A. Graduation day. I graduated a year early because I took college physics and English in high school, so I came to UVA with 13 credits. It was funny – a lot of the guys on the team who were graduating didn’t know I was, too. They saw me with my cap and gown on and were like, “What are you doing?”

Just to see my family and how excited and proud they were – it was amazing. Knowing I had come to UVA as a 17-year-old kid from a small town in the corner of Southwest Virginia to graduating a whole year early, graduation was definitely my fondest memory.

What it Means to Be a Cavalier Baseball Player END_OF_DOCUMENT_TOKEN_TO_BE_REPLACED