Two years ago, Sam Hitch was a typical second-year student at the University of Virginia, spending his evenings studying toward his degree in cognitive science.

When his thoughts would occasionally drift from the task at hand, though, they were often to ideas of grandeur that revolved around his newfound passion for endurance sports. Triathlons, specifically, had recently begun to spark his curiosity, though he didn’t even own a bike.

Now armed with his freshly minted degree – and a new bike – Hitch plans to embark this month on an east-to-west cross-country triathlon that will include a 104-mile swim, a 3,012-mile bike ride and a 766-mile run.

“When the idea first came to me, I had never done a triathlon, I could barely swim 100 yards, I did not own a bike and I was not in the best shape,” Hitch said. “There were many obstacles in the way, but throughout the years, I haven’t gotten the idea out of my mind.”

When Hitch decided to turn his idea into reality, he was met with one question from his family: “When do you start?”

And so on June 18, Hitch will begin his trek across the country, with his mother, Virginia, driving alongside in a support vehicle.

In fact, it was Hitch’s mother who first introduced him to endurance sports. When he was a sophomore in high school, the two signed up for and completed Hitch’s first long-distance race, the Virginia Beach Rock ’n’ Roll Half Marathon.

“That was my first taste,” Hitch said. “It’s been a habit ever since.”

Since then, Hitch has completed numerous events, including the World’s Toughest Mudder, Ironman Texas and the Monticelloman Olympic triathlon.

But Hitch’s current endeavor, which he is calling TriAmerica2016, is more than just a test of physical prowess. It’s also a way to raise money and awareness for the Lustgarten Foundation, a nonprofit organization committed to the advancement of pancreatic cancer research.

“I have a few friends whose family members have been affected by pancreatic cancer. It can be devastating,” Hitch said. “The Lustgarten Foundation does great work in attracting doctors who are interested in doing the research, raising money for it and also helping with treatment and supporting families.”

Hitch’s effort will kick off with a 104-mile out-and-back swim in the James River. Upon completing the swim, Hitch will hop on his bike in Yorktown, Virginia and head west along the TransAmerica Bicycle Trail and the Western Express Bicycle Route. After completing 3,012 miles on the bike, Hitch will run the final 766-mile stretch along the Western Express Route to his destination of San Francisco.

Hitch estimates that the entire journey will take between 58 and 68 days. If he is successful, the completion of his 3,882-mile triathlon would eclipse the existing Guinness world record for the longest recorded triathlon – currently sitting at 3,096 miles.

“Going after the Guinness world record was an afterthought,” Hitch said. “I hope the attention the attempt gets supports my goal of raising money and awareness for the Lustgarten Foundation.” 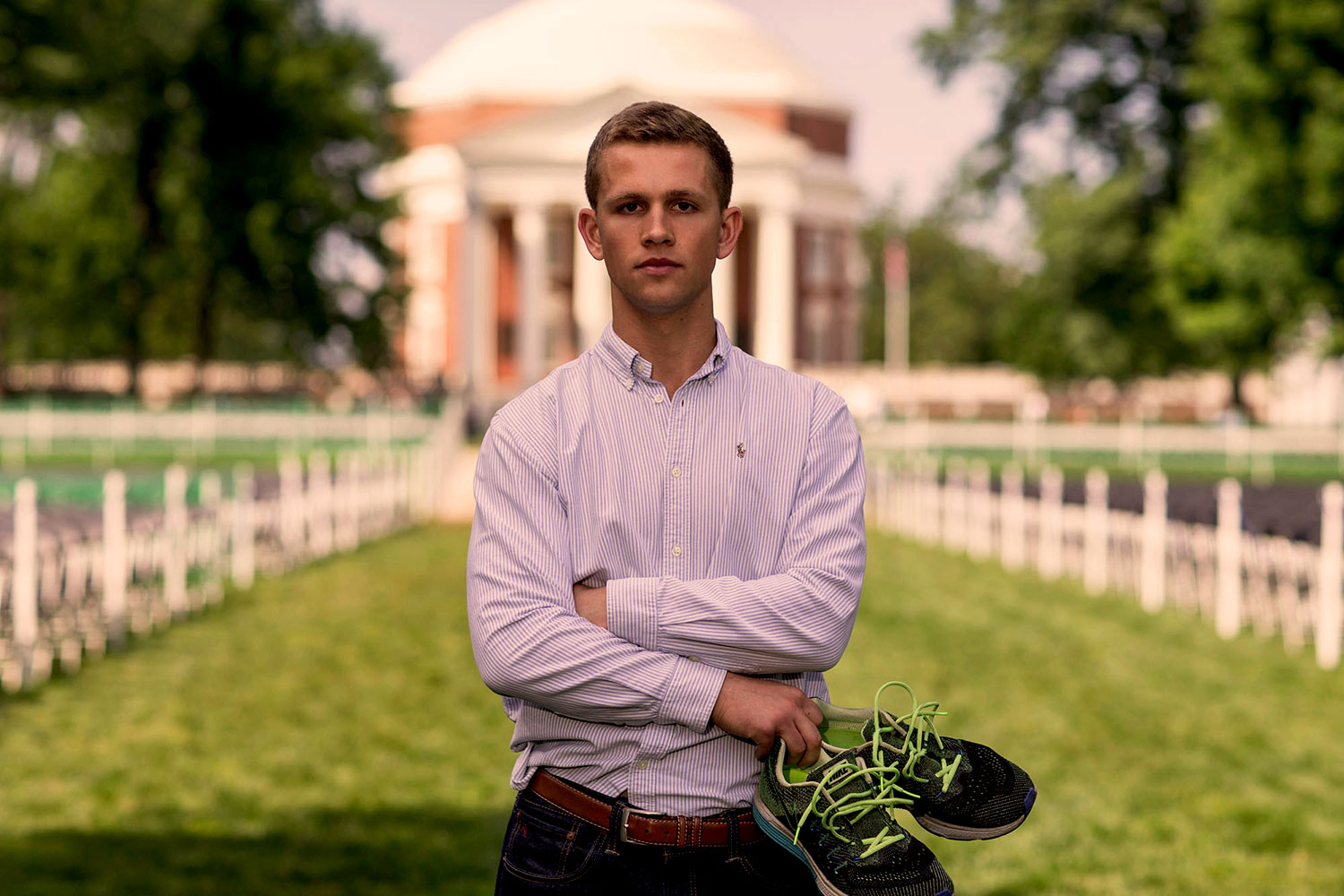 The goal of Hitch’s training leading up to the main event has focused on building endurance and durability. From four-mile swims in the Aquatic & Fitness Center pool (128 laps), to running as many as 35 miles in two sessions on one day, to completing six hours on the stationary bike at Memorial Gymnasium, Hitch estimates he spends 30 hours a week exercising.

“I want my training to be characteristic of the actual event,” Hitch said. “Instead of swimming a couple miles, going for a 10-mile run and then doing an hour or two on the bike all in one day, I’m doing one sport a day for consecutive days to get my body used to doing the same thing over and over.”

Though Hitch enjoys the solitary nature of training for an extreme endurance event, he also admits it can, at times, be a lonely pursuit.

“While I’m swimming, it’s this dual consciousness of wanting to zone out but also needing to count my laps,” he said. “Four miles is a long time in a pool.”

As he trains for the next few weeks in his hometown of Norfolk, however, Hitch will have some company, as his mother will continue to offer her endless support by kayaking alongside him in the Lafayette River.

And as the countdown to June 18 draws near, Hitch said he’s putting faith in his mental and physical capabilities.

“At times I am very confident and ready to get started, and other times I am nervous, feel overwhelmed and think ‘Why did I think I could do this?’” he said. “But overall, as each day goes by and I think about all the things I have accomplished in that single day and over the last several months, I get very excited. I have logged hundreds of hours of training this year and have tried to mentally prepare myself for hopefully one of the most painful and rewarding two-month periods of my life.”

When Hitch’s grueling journey is all said and done, he has a couple of plans before he moves to New York City to pursue a career in real estate.

“The first thing I’m going to do is hug my mom,” he said. “And then sleep for days.”

But, most importantly, Hitch’s greatest wish is that he will have served his greater purpose in supporting the Lustgarten Foundation.

“I hope we raise a lot of money for pancreatic cancer research,” he said.

Hitch is challenging current and former UVA students to support him by donating $1 to the cause – and to find their TriAmerica2016 equivalent.

“Every day at UVA I met new and interesting people, from All-American athletes to opera singers,” Hitch said. “I have some amazing peers and I hope they can find a cause that is important to them and make it happen.”