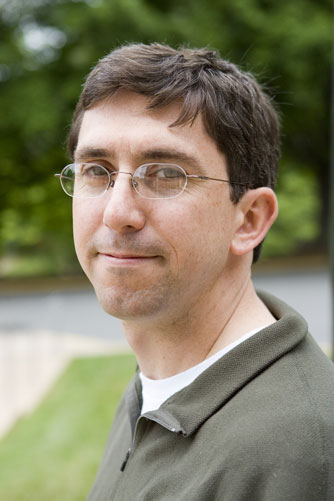 May 17, 2006 — The small submarine descends from the brilliant blue surface of the Gulf of Mexico toward the seafloor thousands of feet below. Inside are a pilot and a few researchers, including Bill Gilhooly, a University of Virginia graduate student. At 500 feet the sea goes completely black. Finally at the bottom, the sub cruises over a desert of stirring silt; its external lamps seek signs of life.

And there it is: a patch of bacteria and odd clams and worms thriving in a region of vents releasing methane from deep within the earth. It is a landscape as inhospitable as an alien planet, and yet, a freakish assortment of creatures have evolved to survive here.

Gilhooly and his colleagues are thrilled by the experience. Only a few hundred people in the world have ever seen first hand what they see now – worms living in six-foot tubes, huge clams and mussels and an assortment of odd fish, all adapted to conditions so extreme, most other life forms would perish here in an instant.

As a graduating doctoral student in geochemistry, Gilhooly has made five dives in two research submarines (called submersibles by scientists) at depths of as much as two miles below the surface of the Gulf of Mexico and the Atlantic Ocean.

“It’s breathtaking to travel along a barren sea floor and then suddenly come upon large dynamic communities of organisms that are thriving in zones of absolute darkness and toxicity,” Gilhooly said. “One of the big goals of this type of research is to understand how these creatures can survive there.”

Through projects led by Steve Macko, professor of environmental sciences, undergraduate and graduate students during the past several years have made numerous ocean expeditions on research vessels to study the chemistry of the sea and the geology of the seafloor. They are helping to redefine what life is, and the strange conditions under which highly specialized organisms can survive and thrive.

Such as 250-year-old mouthless tubeworms that feed on bacteria. And worms that feed on toxic frozen methane. And sulfur-feeding bacteria that have developed a symbiotic relationship with a bizarre type of clam. Until the discovery of these organisms a couple of decades ago, scientists simply did not believe that life could exist in such harsh and extreme conditions.

“We’re possibly looking at the very origins of life, at the ways life developed in extreme conditions before photosynthesis,” Macko said.

During a couple of Gilhooly’s undersea adventures, he visited a small area in the Gulf of Mexico called the Brine Pool. It is a small lake of extremely salty water at the sea bottom, 1,800 feet below the ocean surface. The water in the pool is three-and-a-half times saltier than normal seawater. It is so dense, the sub can only penetrate its nose a few feet in, even with thrusters churning at full throttle. An assortment of odd creatures live there as well.

Gilhooly also has conducted research with the Integrated Ocean Drilling Program, an international partnership of scientists and research institutions exploring the Earth's structure and geological history. Gilhooly has analyzed the chemistry of core samples taken from thousands of feet below the sea floor. This work provides a more complete picture of how the Earth formed and how life developed.

Gilhooly has enjoyed the collegiality of shipboard life. He has worked on samples from the bottom with scientists from an assortment of disciplines — biologists, chemists, geologists and hybrids, such as biochemists and geochemists.

“The best thing is seeing these things with your own eyes, and knowing that very few people will have this opportunity,” he said.

After graduation Gilhooly will continue his life beneath the sea. In June he begins a post-doctoral fellowship in the geology department at the University of California-Riverside where he will conduct research and participate in deep-sea dives off the coasts of California and Oregon.

“This kind of hands-on research experience is the best way to get students into the field,” Macko said. “We’re training the creative young minds of this generation to make the discoveries that my generation missed.”

What Is the ‘4th Side’? END_OF_DOCUMENT_TOKEN_TO_BE_REPLACED