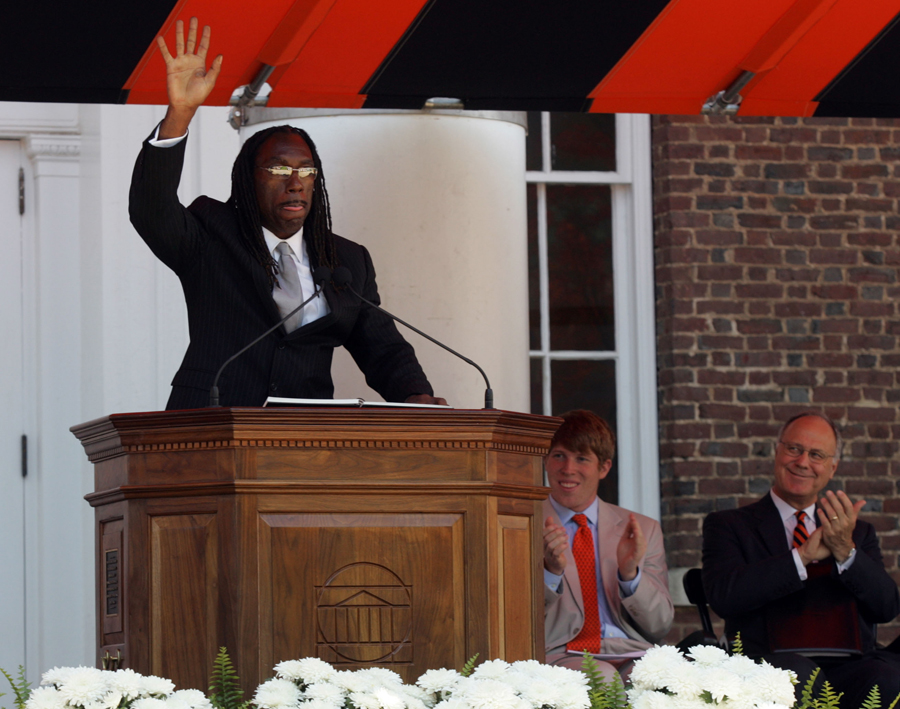 Boyd Tinsley concludes his remarks to the Class of 2007(Photo: Andrew Shurtleff)

May 19, 2007 —Boyd Tinsley, violinist for the Dave Matthews Band, spoke to the University of Virginia's Class of 2007 about the power of dreams during Saturday’s Valedictory Exercises.

Just as Thomas Jefferson's dreams of founding the United States and his own dream of becoming a rock star had come true in defiance of conventional wisdom, Tinsley said, so too will improbable future accomplishments start with a dream kindled by those who refuse to accept things the way they are.

Tinsley presented his remarks to the graduating class, their families and friends on U.Va.’s historic Lawn where the commencement exercises will be held starting at 10 a.m. on Sunday, May 20.

The ceremony also featured presentations of several awards and the announcement of the class gift. Noting a last minute surge in donations that drove the class gift total beyond even what was printed on the ceremonial check, Elizabeth A. Oswald and Raleigh Anne Blank, co-chairs of the Class of 2007 Giving Committee, announced that the gift totaled $3.4 million, which elicited surprised gasps in the audience.

In accepting the check on the University’s behalf, President John T. Casteen III deadpanned, “This is a pleasant surprise.” Added Casteen: “Obviously, I hope your interest in this type of activity continues.  I’ll stay in touch.” Since each student can direct his or her gift toward a specific use, Casteen reported that more than 170 different programs have benefited from the generosity of nearly 60 percent of the class.

Under a cloud-dotted blue sky, Tinsley, who attended U.Va. more than 20 years ago and studied American history, said that growing up in central Virginia made it hard not to be interested in history, especially with the homes of three founding fathers — Madison, Monroe, and Jefferson — so near.  He wryly observed that, in addition to being dreamers, he and Mr. Jefferson had several other things in common, including hair that stood out in a crowd.

Tinsley said that he has come to know many members of this generation of college graduates and they give him hope. Observing that Martin Luther King Jr., in his famous "I have a dream" speech, had anticipated a day when his grandchildren would live in a country where people would be judged by who they were on the inside, not what they looked like on the outside, Tinsley told the students: “You are that generation, and from what I see, you’re living up to that dream.”

“Dreams are a powerful force,” Tinsley said. “They've brought down empires. They've righted injustices. Every invention has started with a dream: the light bulb, automobiles, planes and computers. . . . Dreams put a man on the moon.”

The world has been changed by those who dreamt of a better world, such as Abraham Lincoln and Susan B. Anthony. Such leaders sacrificed their lives to help bring about the world inhabited by today's generation, who continue that legacy, Tinsley said, adding: “When we dream, believe, persevere and use every bit of our hearts, our minds, our blood, sweat and tears, we can accomplish anything.”

Tinsley shared his belief in what this generation of dreamers can accomplish: ending poverty in America and greatly reducing it around the world, finding a cure for diseases like AIDS and cancer that kill thousands every day, reversing global warming, and creating a world where peace is the rule and war is the exception.

“Among you are future congressmen, senators, governors, and mayors. And some young lady out here will be a future President of the United States. I hope that, like me, you will refuse to accept conventional wisdom,” he concluded.

The awards announced earlier in the Valediction were:

• Class Award for Above & Beyond was presented to Kathryn Joan Daughdrill;