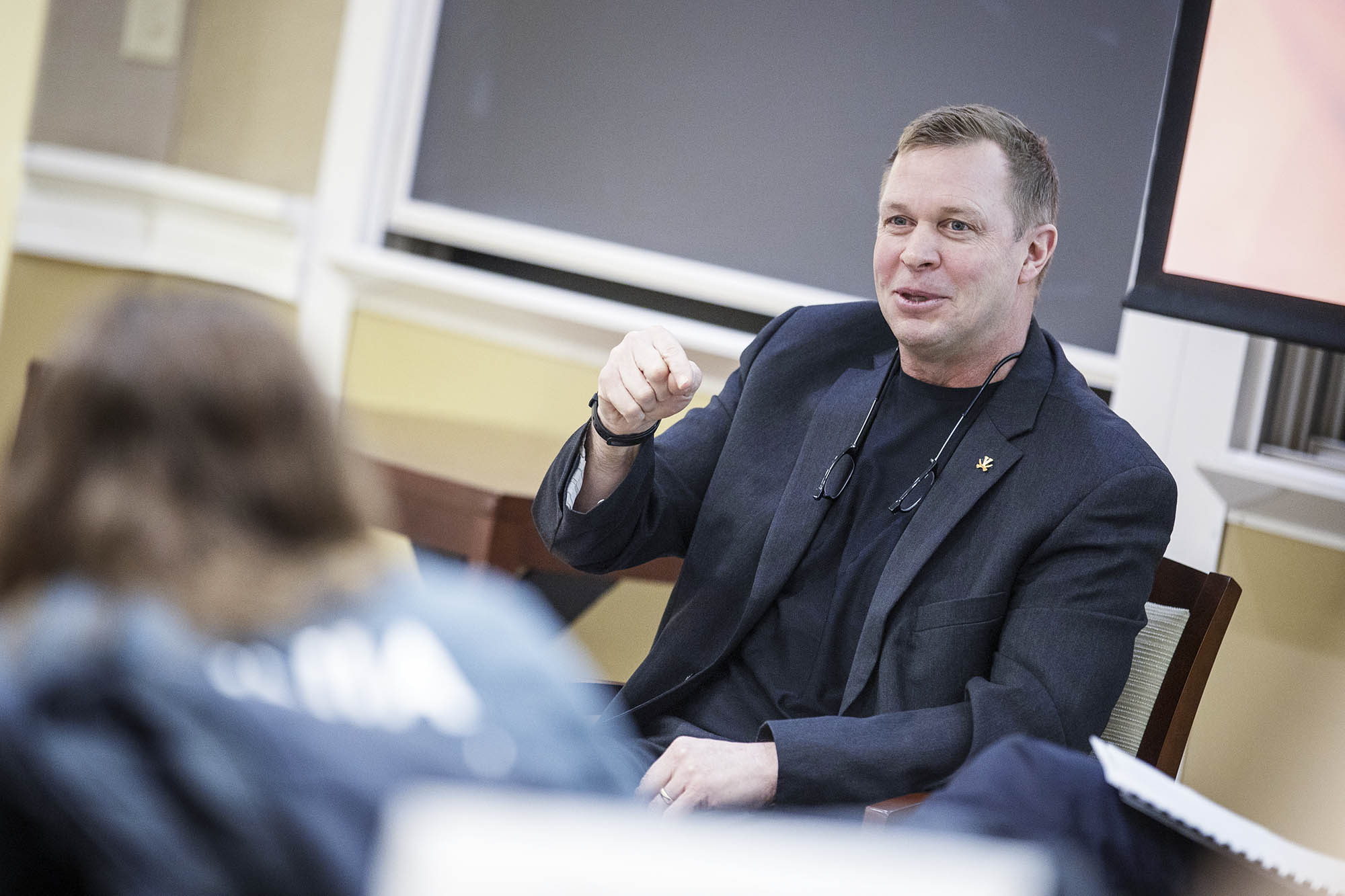 Every week, while sports media members are hard at work filling out their Top 25 ballots, University of Virginia football head coach Bronco Mendenhall pores over his own rankings.

At the top of his poll you won’t find the Hoos, Clemson University, the University of Alabama or any of the top college teams.

Instead, you’ll find “Good to Great, “The Power of Full Engagement” and “How Will You Measure Your Life?”

They are among a wide array of non-fiction books that Mendenhall cherishes and considers vital to the way he is building the UVA program and leading his players, both on and off the field.

“It’s one of my favorite things to do,” Mendenhall said. “I close my door to my office and I just start scrolling the shelves and putting them in order. I sit back and look at them and see if that reflects where my current priorities and needs and desires and intent [are], and then I go ahead and do it again the next week.”

Mendenhall ranks the books in his library according to the impact they’ve had on him.

“Anything on the shelf has value,” Mendenhall said. “If it doesn’t add value, it doesn’t make the shelf.”

Mendenhall’s goal is to read 150 pages each day. Some days he gets there, some days he doesn’t. It just depends on what time of year it is and how busy he is.

Mendenhall said reading, much like exercise, is a form of “renewal.”

“If I don’t exercise at a certain heart rate for a certain length of time, the solace and peace that abides in me doesn’t last long enough,” he said. “So, for me, it’s about the 150-page mark.”

Mendenhall said he reads about 50 books a year.

“I’m not professing that I’m setting some kind of world record, but it is just frequently part of the conversation [within the program],” Mendenhall said. “Sometimes the players roll their eyes. They’re like, ‘He’s talking about that book again,’ but they expect it and kind of laugh and joke about it.

“But I think it’s also helpful to them because if they’re interested, they can get the book themselves. I love that – when they can take control and address issues that they have questions about.” 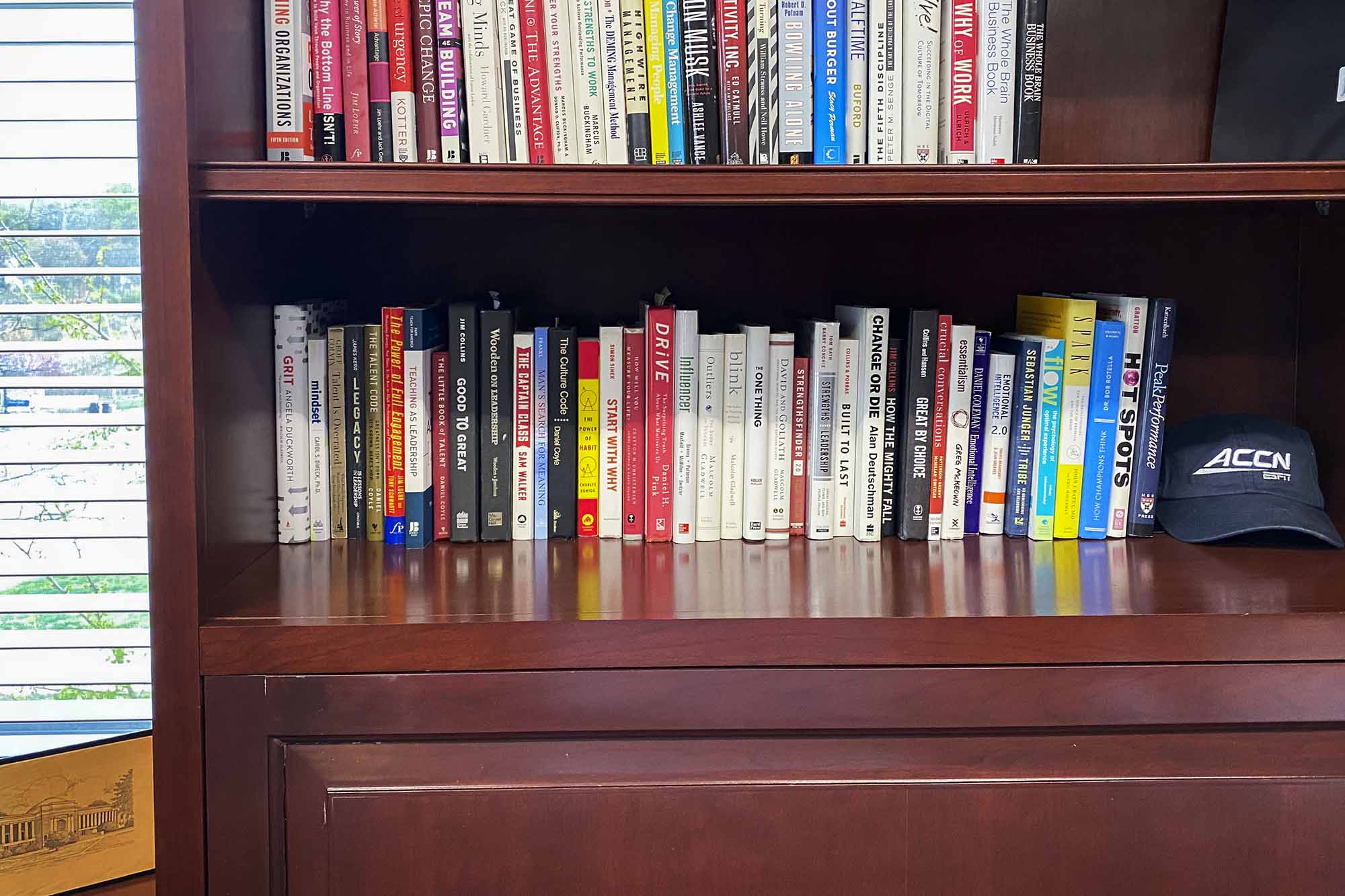 The floor-to-ceiling shelves at Mendenhall’s home are reserved for books about his Mormon faith, while the ones at his McCue Center office are designated for books he believes can put him in the best position to help his players.

Mendenhall frequently tinkers with his rankings. He has what he refers to as a “filtering and retaining” process. “If I don’t think they’ve had significance or weren’t completely relevant to me, then I give them away to someone I think would have interest in them,” he said.

This often includes players, staff members and even UVA coaches from other sports whom he has befriended.

“He’s always recommending a book or referencing a book,” UVA linebacker Charles Snowden said. “When you walk in his office, it might as well be a library with all the books he has on the shelves. He’s definitely very passionate about them.”

Mendenhall said one of his “foundational” books is “The Power of Full Engagement,” which centers on managing your energy, not your time.

At last check, Mendenhall was re-reading two of his all-time favorites, “Forged in Crisis” and “Grit” – which focus on resiliency – and was about to delve into “The Last Cowboys,” “Factfulness” and “The Originals.”

“It’s hard for me to have a conversation without saying, ‘You know what I just read …,’” Mendenhall said.

Mendenhall’s love for books took root at Brigham Young University, just after he was promoted from assistant to head coach. Running the whole program was a very different than planning a blitz package, and Mendenhall realized that there was a lot to learn in order to guide players through their college experiences and get them to be “the best versions of themselves.”

A large percentage of players at BYU were married, which led to Mendenhall reading books on marriage counseling.

Over time, he had a laundry list of other subjects that he knew even less about – depression, sleep disorders, anxiety, dietary issues.

But that’s when something funny happened.

“As I studied some of these other topics, I actually found that I liked them more than football,” Mendenhall said. “And I became more engaged with these other things. I loved that I was able to help and counsel and nurture and help develop young people, which really uncovered my passion. It wasn’t really coaching football anymore.

“What I learned was that I was passionate about the development of young people. And so all of my reading then shifted to how broad of a curriculum could I construct that would give me a chance to be able to be helpful to the young men that came in my program.”

“For you to really extract and draw the content from the pages, it has to be complete immersion to go deep enough. And I think when you do that, it quiets the world.”

The novel “The Power of One,” by Australian author Bryce Courtenay, is the book that had its first big effect on Mendenhall. Its main theme is that difficult challenges in life don’t determine destiny or outcome.

“I loved that idea,” Mendenhall said. “It was empowering.

“We have a say in determining outcomes in so many areas of our life. I think it’s an easy default to just default to circumstances. Circumstances certainly do influence, but there have been so many examples of just miraculous character that have been forged through these fierce challenges by people standing in defiance of the challenges and deciding that they are going to make it in some unique or amazing way. That book shaped a foundational philosophy in that way.”

During team meetings, which have continued during the COVID-19 pandemic via videoconferencing, Mendenhall has a segment called “The Best Day Ever” in which team chaplain George Morris goes over one of the program’s 14 guiding principles.

One of the principles that Mendenhall has instituted in the program is “The Power of Choice,” which he derived from “The Power of One.”

In the sessions, Mendenhall frequently interjects with a point from something he’s currently reading that ties into what Morris is discussing.

Before last season, believing that leadership, even more so than in previous seasons, was going to be a key element to the team’s success, Mendenhall had the team read “The Captain Class,” a book by Sam Walker that examines why successful sports teams throughout history were able to succeed.

The hypotheses is that it isn’t coaches, but the team captains who play the biggest role in success.

“It was centered around what traits great leaders have,” said Snowden, who was elected a team co-captain for the coming season. “It talked about Carles Puyol, a defender on Barcelona soccer who wasn’t by any means the greatest player on their teams, but he was the greatest leader, and it kind of talked about what we should look for in leaders.”

When Mendenhall first took over at UVA, he’d receive some quizzical looks during team meetings.

“This idea of the head coach bringing in different books every day and quoting from slides and literature on PowerPoints – I think they thought it might have been more like an English class,” he said.

“Really, it doesn’t seem like a football meeting – and that’s my intent. I’m much more guided by kind of the John Wooden, maybe Tony Dungy approach, of being cerebral and teaching rather than the supersized TV version of what entertaining coaches look like. And so there was an adjustment there.”

Mendenhall said one of first players who grasped what he was trying to do was former linebacker Malcolm Cook.

From there, players began coming to his office with questions about things he had mentioned from his reading.

Now, Mendenhall said, players often leave his office with books from his shelf, with an agreement to reconvene and discuss them later. 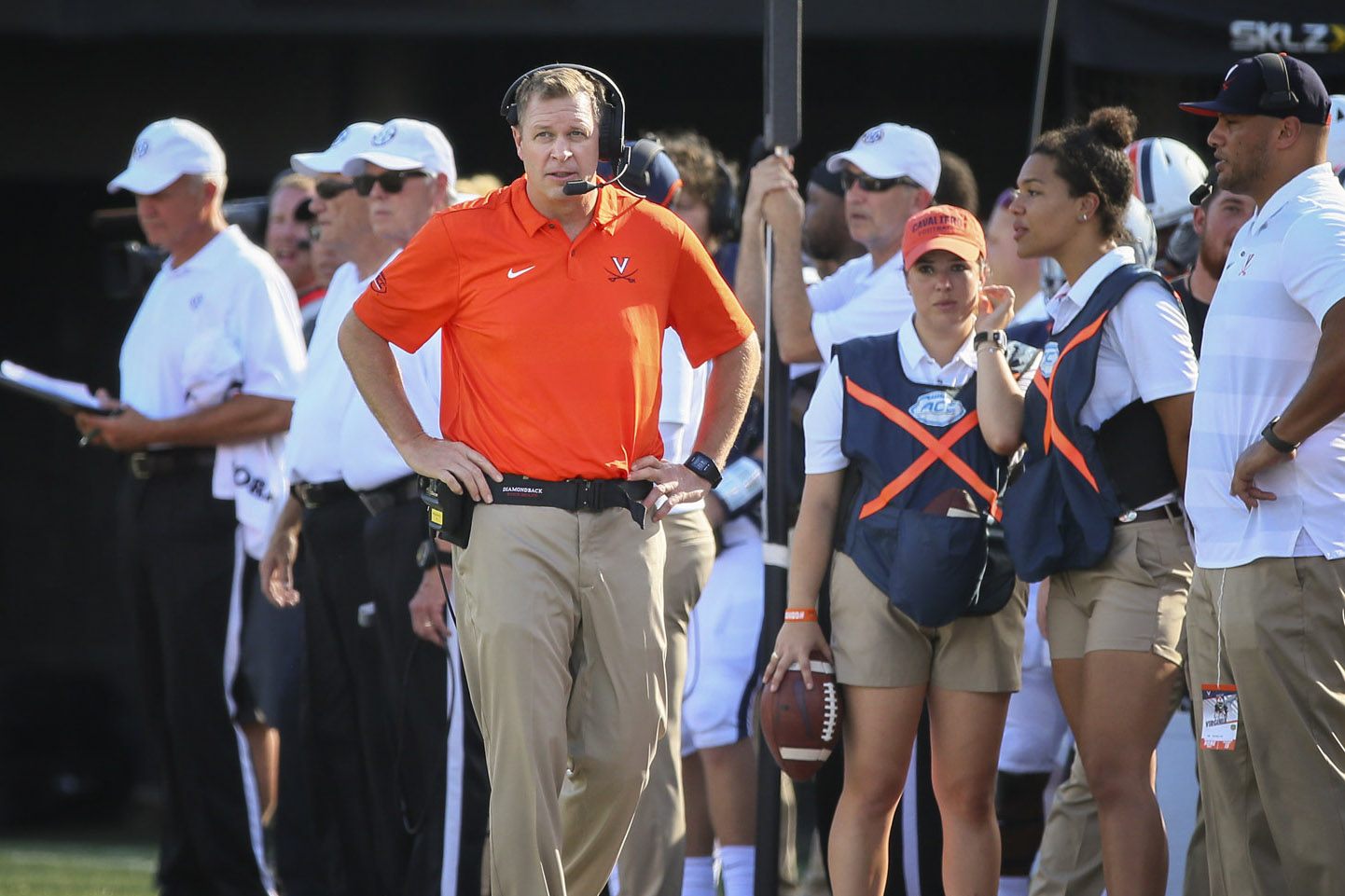 Mendenhall re-reads the books that have been most meaningful.

In the spring, he was doing so with Elie Wiesel’s memoir “Night,” about Auschwitz, and “The Long Walk” by Sławomir Rawicz, about the author’s escape from a Soviet labor camp in 1941.

On his shelf, Mendenhall always has about a dozen new books lined up that he is hoping to get to.

Mendenhall said there is often a ripple effect that dictates what he will choose to read next.

“A lot of it goes to purpose, then application, purpose then application,” he explained. “They’re all kind of related and can change spots in the rankings based on what’s relevant in the moment.”

On occasion, usually in the summer, Mendenhall dips into fiction – mostly “cowboy-related,” he said. His favorite author is the late Western novelist and short story writer Louis L’Amour.

Prior to arriving at UVA, Mendenhall tried his own hand as an author, collaborating on “Running Into the Wind.”

Interestingly, Mendenhall said writing wasn’t something he was passionate about. He said he did it because he wanted to show that there was a different way to run a college football program.

“The wind of college football seems to be driving toward commercialization and entertainment and professionalism and ego and money and all that,” said Mendenhall, who this spring became one of the first coaches in the country to cancel spring practices in the face of the pandemic, before schools were mandated to. “I’ve tried to run as hard as I can the other way – to focus on human development and amateur sport and the value of education and who these kids will become through this experience.

“There aren’t many running in that direction, and so I really became engaged about the purpose.”

For now, it appears Mendenhall will be sticking to reading books, not writing them.

In examining what has become one of his life’s passions, Mendenhall said what he enjoys most is the engagement that is required.

“For you to really extract and draw the content from the pages, it has to be complete immersion to go deep enough,” he said. “And I think when you do that, it quiets the world. And I think it engages imagination, and I think it’s captivating. And I think for those moments when you’re immersed in the pages, there’s a connection and a focus that promotes this human development that is just so engaging.

“One of the reasons we’re on the planet is to become the best versions of ourselves. … I just love the interaction between the pages where it requires effort – not just to sit and watch. I think the fulfillment that comes from learning from the printed page is maybe what is so captivating, at least to me.”

Class of 2020: Memories and Moments From a Long-Anticipated Celebration END_OF_DOCUMENT_TOKEN_TO_BE_REPLACED