Build a Poem, Build a Movement. It’s All Part of Humanities Week 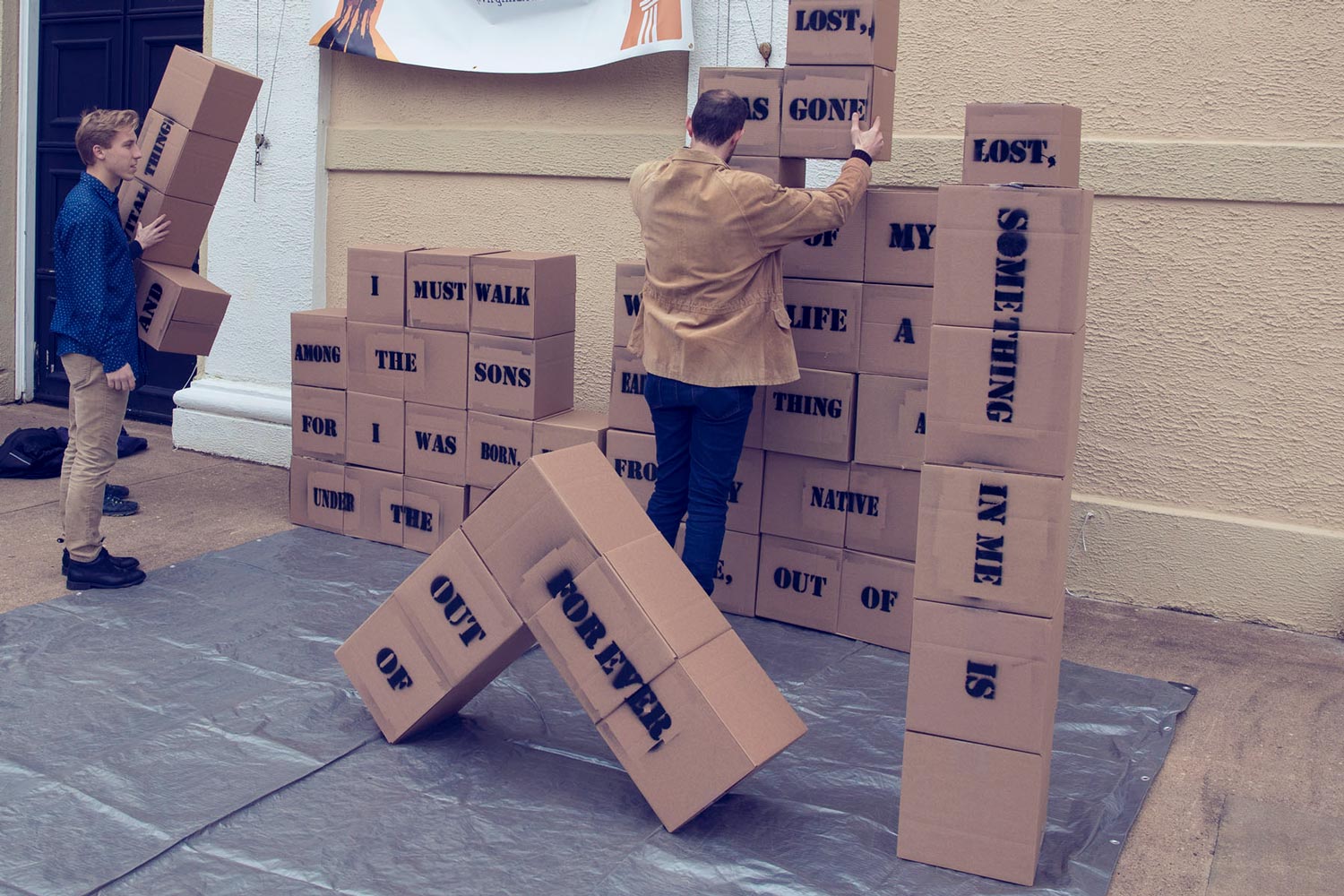 Talk about hands-on learning: One of Tuesday’s events for Humanities Week at the University of Virginia involved assembling a giant puzzle to reveal a poem.

And not just any poem. The final six lines of the sonnet “Outcast,” a 1922 poem by Harlem Renaissance poet Claude McKay, gradually took shape.

The poem goes with the theme of this year’s series of humanities events, “Civil Resistance,” which continues through Saturday. Sponsored by UVA’s Institute of the Humanities and Global Cultures, the annual program is created and produced by students, with a little help from faculty and staff. The week’s activities reflect how “social movements, petitions, protest, art and court cases are forms of civil resistance that a democratic society promotes,” said Emma Hendrix, a third-year student in the School of Architecture who is heading the program.

“The politics of the puzzle, which remediates the poem, allow the solver to work at integration,” Pasanek wrote in describing the project. “But its moral, if puzzles can have morals, is more radical. In a word, racism is a structural problem. Reparation and reconciliation are still blocked by the menace of a white supremacy that must be overcome.”

Madeline Zehnder, a doctoral student in English, said McKay’s poem “powerfully and poignantly speaks about racism: the loss of an African past that the speaker wants to reclaim.” 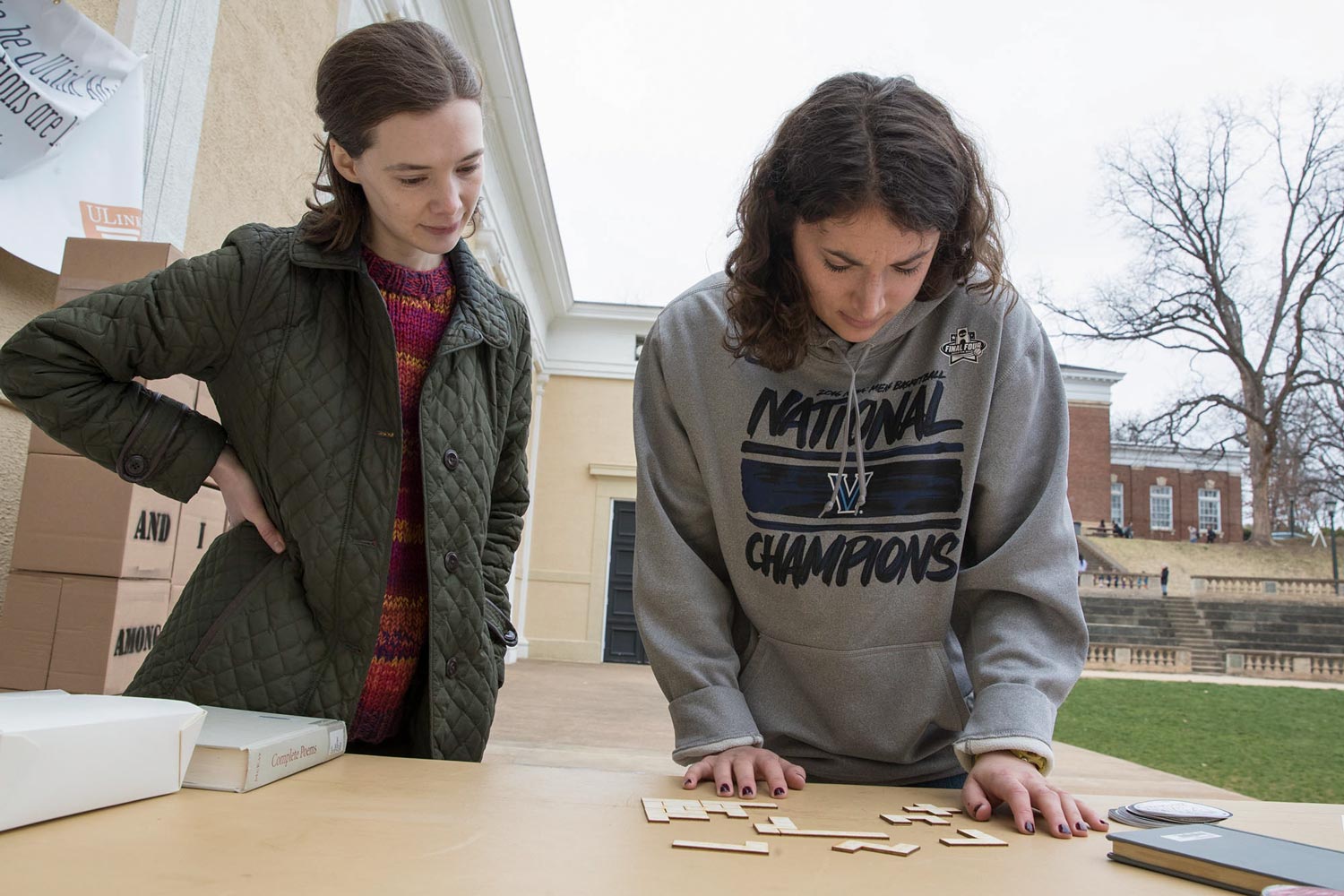 Just as the poet had limited choices in employing the formal, highly structured form of a sonnet, the puzzle players have limited choices in fitting pieces together in a way that makes sense and matches a specific pattern of meter and rhyme, Zehnder said.

Another doctoral student in the Puzzle Poetry group, Neal Curtis, said you don’t need to know the poem by heart, but it helps to know the rules that a sonnet is supposed to follow.

“The division in the different parts of the poem reflect the divisions of race,” added Jordan Burke, another doctoral student who stopped by to play, putting the large puzzle together for the first time.

The Puzzle Poetry group is “all about lasers, supercomputers – and meter and rhyme,” Curtis said. Fabrication Facilities Manager Melissa Goldman trained Curtis to use the laser cutters in the Architecture School’s Fab Lab, and he cut the group’s first sonnet from a sheet of Day-Glo orange acrylic in pieces called “pentominoes.” The group uses supercomputers to determine the shapes of the pieces so that they fit together as the lines of the poem in the right place.

A teaching assistant for the English majors’ survey courses, Curtis said he and other graduate instructors have used the same idea to hold “Sonnet Games,” where students see how fast they can solve the puzzle to put together a Shakespearean sonnet. 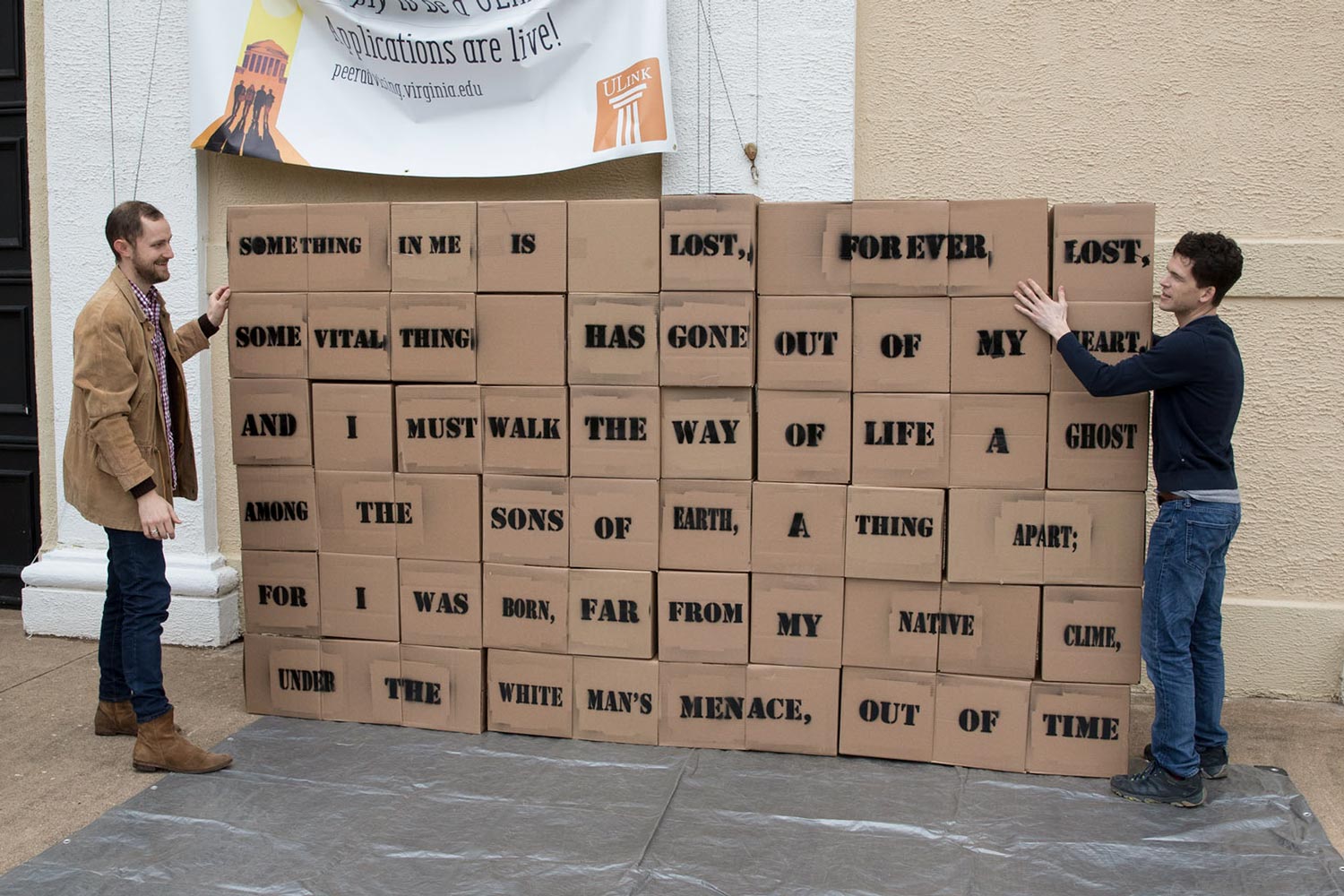 “The puzzle helps them better understand the structure of the sonnet,” he said.

Tuesday’s Humanities Week session also offered small, tabletop versions of the same puzzle-poem made of cut wood that passersby could work on.

Humanities Week will include events that explore the history and nature of civil resistance locally, nationally and globally, as seen through a number of lenses, such as poetry, discussion, literature, photography, art and more. Some events will also provide an opportunity to reflect on and respond to the white supremacist rallies that shook the Charlottesville community in August.

UVA fourth-year student Diane D’Costa will host an artistic expression workshop in her Lawn room at 7 p.m. on Wednesday.

Members of the Graduate Student Coalition for Liberation will hold a panel discussion, “Civility, Civil Rights, and Civil Resistance: Exploring the Charlottesville Syllabus and Direct Action from Grounds,” on Thursday at 11:30 a.m. in Wilson Hall, room 142.

UVA alumna and staff member Vanessa Braganza will discuss art and activism Thursday at 2 p.m., also in Wilson 142, especially the upcoming “We Are Here” diversity festival Braganza is organizing for April 14 at Ix Art Park.

“Art and Protest” will be the topic of a Fralin Museum of Art panel discussion on Friday at 4:30 p.m. in Campbell Hall, room 160. Students from the University Museums Internship class and others will present their research and discuss what they have learned about the intersections of art, protest, monuments and media – not only in the wake of last August’s rallies, but also in terms of recent events such as the Parkland School shooting and subsequent student-led protests.

The Fralin and the Kluge-Ruhe Aboriginal Art Collection will hold a reception Friday at 5:30 p.m. marking the opening of a new exhibition on the art of protest.

The Native American Student Union at UVA will present its annual Pow Wow on Saturday, starting at 11 a.m. on the triangle of grass near Brooks Hall.

What’s Next for UVA’s Class of 2022? END_OF_DOCUMENT_TOKEN_TO_BE_REPLACED