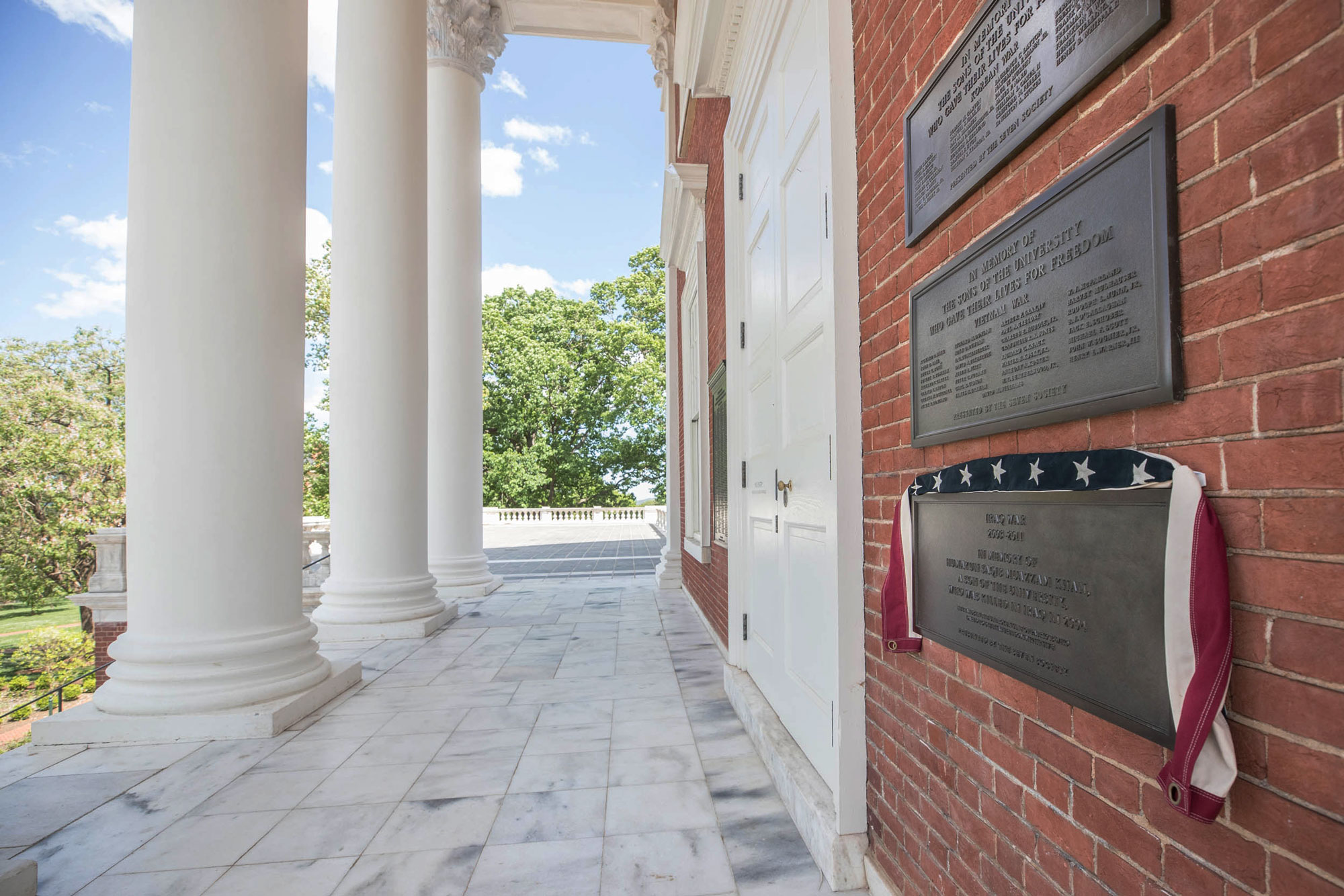 The University of Virginia paid tribute Tuesday to alumni lost in the Iraq war, mounting a plaque on the north wall of the Rotunda. The plaque carries a lone name, Capt. Humayun Khan, a 2000 psychology graduate killed in Baqubah, Iraq, on June 8, 2004.

The ceremony, which took place under a bright afternoon sun and a stiff breeze from the southwest, was attended by about 150 people, including Khan’s parents, Khizr and Ghazala, and his brothers Omer and Shaharyar, members of Khan’s ROTC class, cadets from the Cavalier Battalion and University officials including President Teresa A. Sullivan and the Lt. Col. Mark Houston, the current commander of the Cavalier Battalion.

Khan’s sacrifice was remembered by former Col. Robert E. McMillin II, a 1984 UVA history graduate and a member of the Army ROTC program, the featured speaker at the event. 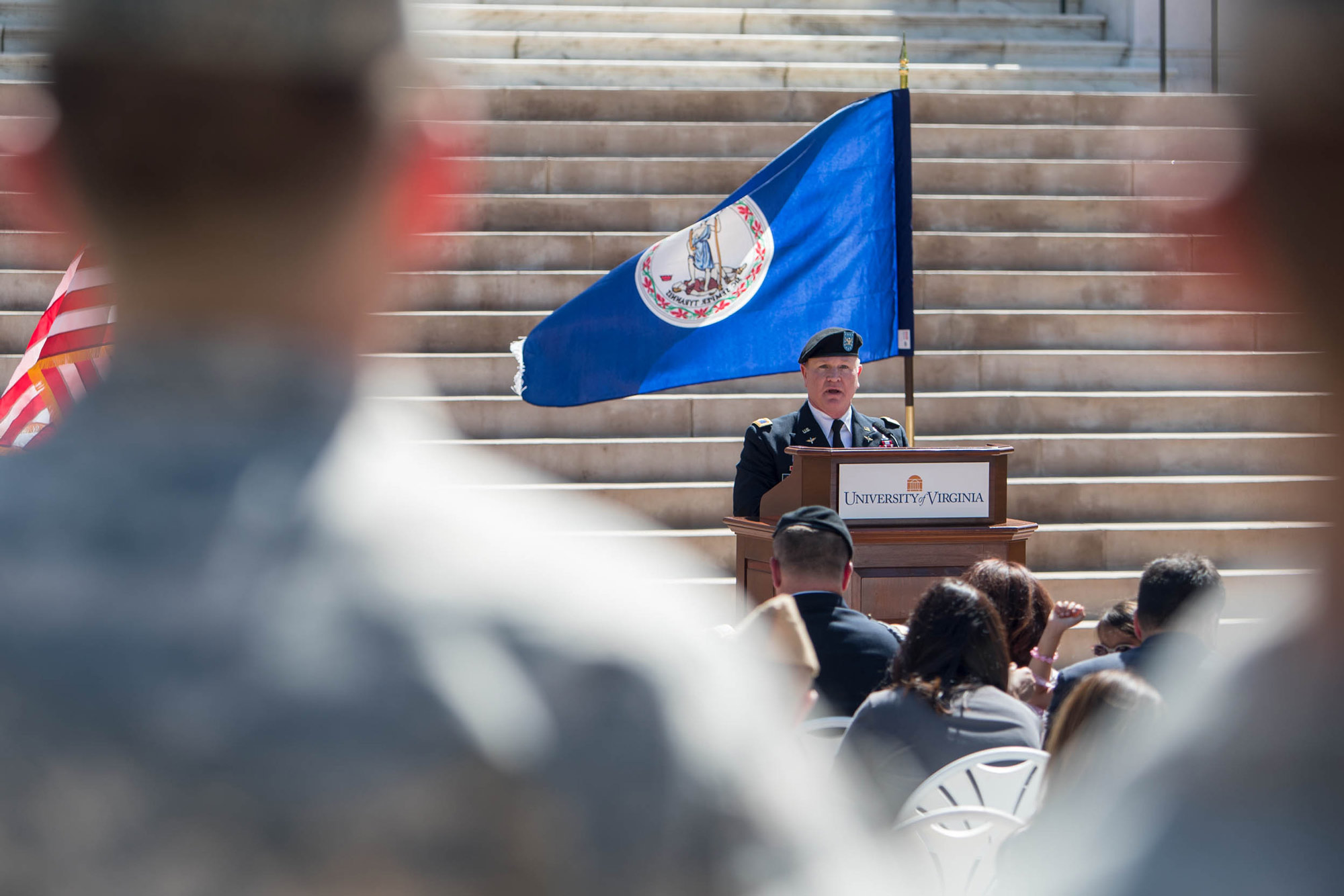 “War is the most destructive of all human endeavors,” McMillin said. “On a macro scale, it seems distant and surreal, bound to the political nature from which it sprung. On the ground of battle, however, it is very real where one can view firsthand the Pandora’s box of horrors which is opened. Lives are lost, homes and businesses are destroyed, society is stretched to the breaking point and no one can predict what will emerge when the chaos subsides.”

McMillin said Khan, who was born in the United Arab Emirates and who moved to Maryland when he was 2, was assigned as an ordnance officer with the 201st Forward Support Battalion, 1st Infantry Division, in support of Operation Iraqi Freedom. While there, Khan helped the Iraqis develop a neighborhood watch type program, and maintained day-to-day security of the camp.

“His efforts in both of these missions won him the respect of his subordinates, peers and commanders,” McMillin said. “On June 8, 2004, while on a routine inspection of his compound gate guards in Baqubah, an an orange-colored taxi drove toward them. Capt. Khan, sensing danger, ordered his soldiers to ‘hit the dirt.’ He walked toward the car, motioning for it to stop. A makeshift bomb inside it exploded, killing him and two Iraqi civilians in addition to the two suicide bombers. Ten soldiers and six Iraqi citizens were also wounded.” 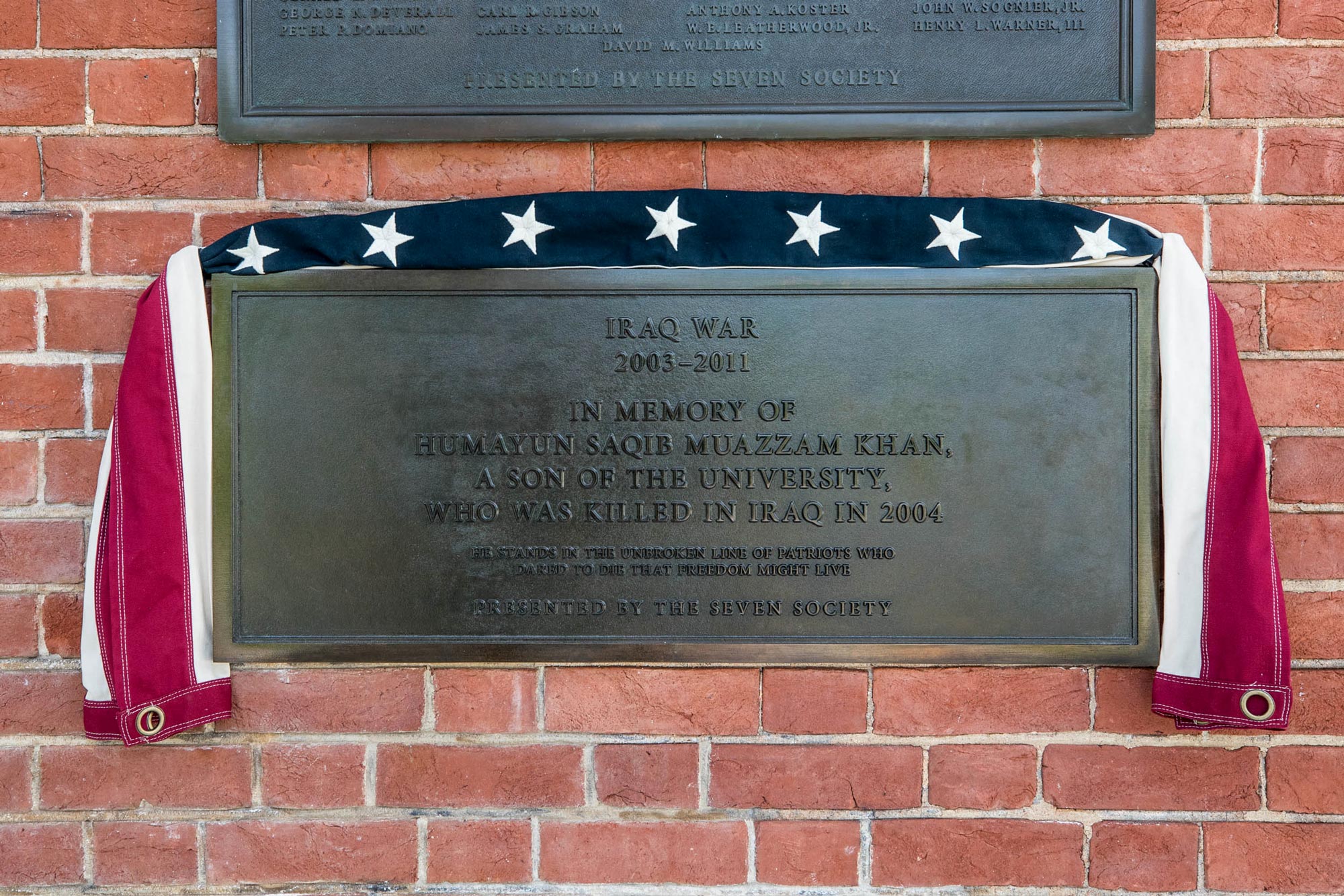 McMillin said Khan, in his letters home, explained that, like other members of his unit, he was being true to his word and his commitment to the nation.

At a memorial service at the time of Khan’s death, his commander, Lt. Col. Dan Mitchell, said, “He died selflessly and courageously, facing the enemy head-on, keeping him from taking the lives of others. By all attributes, he was a genuine and good person who saw the best in others — a tribute to humanity. We will keep his dreams of a more prosperous Iraq alive. We will not forget him and the noble ideals he stood for.”

McMillin noted the sacrifices that service members’ families make during times of war, and reminded his audience that more than 4,500 American service members perished in the Iraq war, a combat theater in which he did two tours.

“I am supremely humbled to speak at the dedication of the University of Virginia Iraqi War Memorial,” McMillin said. “I am proud to be a graduate of a program that commissioned such a hero and am honored to be an American who will never forget Capt. Khan’s courage and selfless service.”

Khizr Khan, who was presented with a small replica of the plaque on the Rotunda wall, said the ceremony and the plaque were not just about his son. 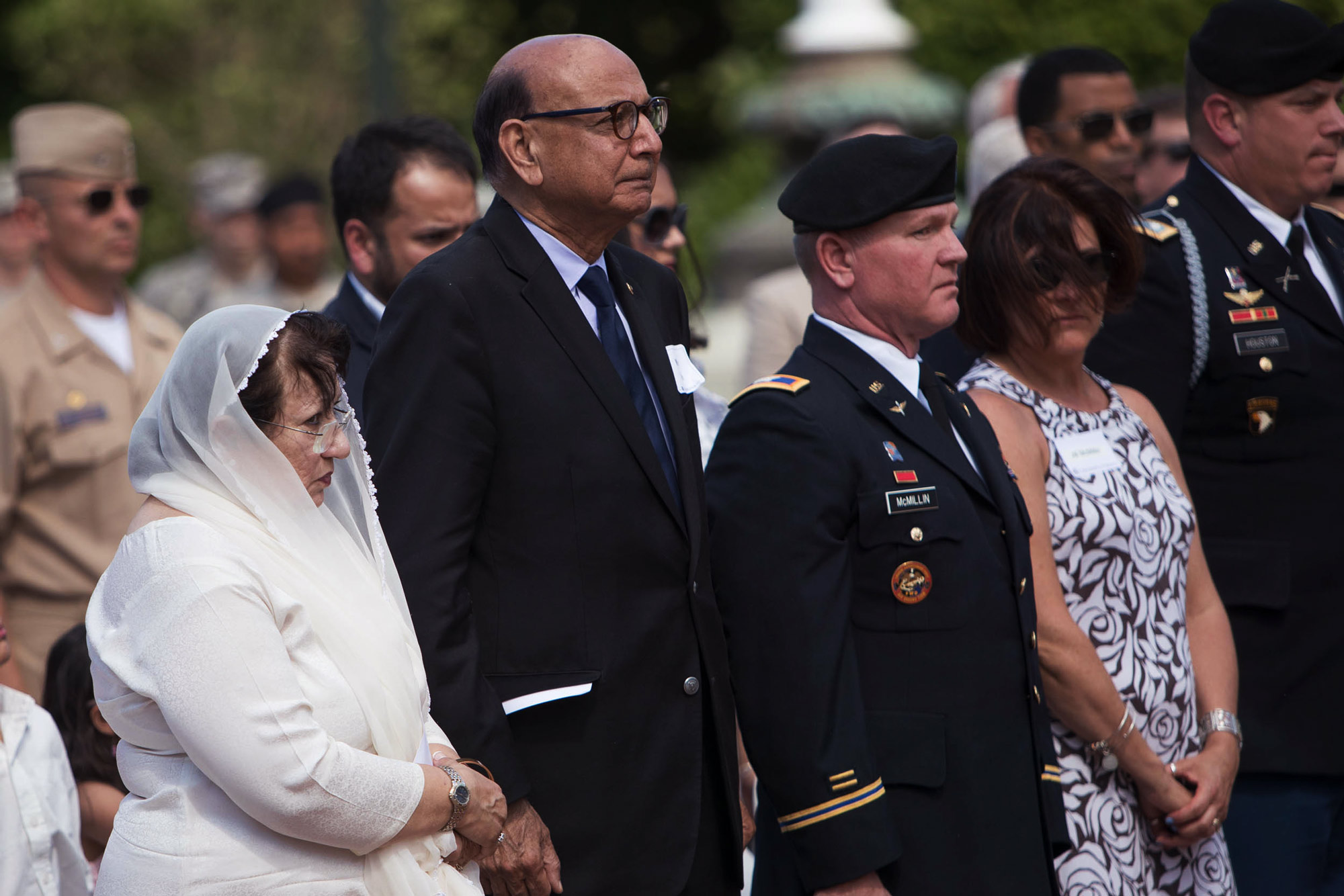 The plaque is a gift from the Seven Society, which has donated other plaques honoring UVA’s fallen in wars.

“On the outside walls of the Rotunda are plaques honoring hundreds of alumni who died in the Civil War, World War I, World War II, the Korean War, and the Vietnam War,” Sullivan said. “Today, we dedicate a new plaque in memory of the University’s only alumnus who was killed in the Iraq War: U.S. Army Capt. Humayun S. Khan. Capt. Khan graduated from the University in 2000 with a bachelor of arts degree in psychology. He was a distinguished member of UVA’s Army ROTC. He lived in Hereford College and the Gooch/Dillard dormitories. His classmates remember him as being a serious student and a loyal friend, with a great sense of humor.”

His classmates were moved by the ceremony and remembered Khan fondly.

“He used to cut my hair for me, back when I had hair,” said Lt. Col. Cecil Stinnie. “He kept me from getting into trouble when we were cadets together.”

Stinnie, who is currently commander of the Army ROTC program at the University of Richmond, said Khan was serious when he was in uniform but he could relax afterwards. “He was very outgoing,” Stinnie said. “He was always over by the Dell, playing basketball.”

Major James Holzgrefe, currently serving at the Center for Army Analysis in Fort Belvoir, thought the ceremony was “wonderful” and the remarks “thoughtful.” He said that all of Khan’s surviving ROTC classmates attended the ceremony.

“This gives us a chance to link up with old classmates and reconnect with the Khan family,” he said.

A Year We Will Never Forget: 2019-20 in Review END_OF_DOCUMENT_TOKEN_TO_BE_REPLACED

‘What Will You Carry With You?’ Remarks From UVA President Jim Ryan END_OF_DOCUMENT_TOKEN_TO_BE_REPLACED