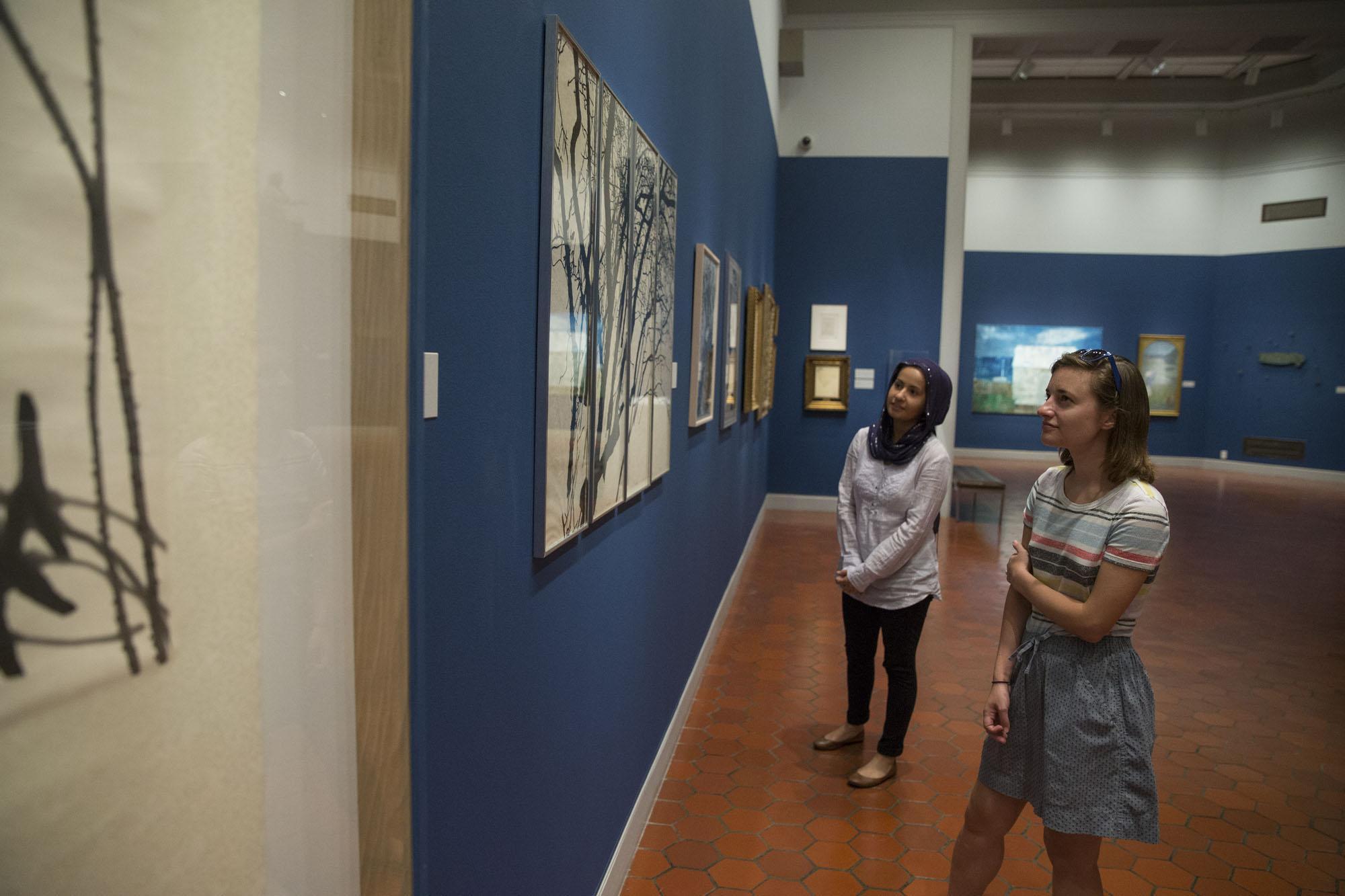 The latest exhibition at The Fralin Museum of Art at the University of Virginia includes a lithograph by Pablo Picasso, a drawing by the legendary Bob Dylan and a striking canvas by contemporary great Gerhard Richter – all hailing from the living rooms, dining rooms and galleries of ’Hoos around the country.

“There is a very lively interest in collecting art among alumni, faculty and friends of the University, and the museum is a natural place to celebrate that and celebrate the importance of art on Grounds,” said Bruce Boucher, director of The Fralin and curator of the exhibition, “Cavaliers Collect.”

“Cavaliers Collect,” which opened Friday, celebrates the 80th anniversary of the University’s museum, with 75 pieces on loan from 53 U.Va. alumni, faculty and friends on display until Dec. 20.

Visitors are greeted by four portraits that uniquely suit the occasion: King Charles I, arguably the original “Cavalier”; the Cavalier’s consort, Henrietta Maria; Charlottesville’s own James Barbour, whose property in Barboursville is now a major local vineyard; and, of course, a portrait of Thomas Jefferson.

Beyond these local treasures is a panoply of artwork spanning the globe and representing centuries of art history. Religious paintings from 14th-century Italy accompany ancient Chinese and Indian sculptures as well as bold, contemporary art.

“It is an eclectic show, and it has been challenging and exciting to see how these pieces, extraordinary in their own right, interact with each other,” said Rebecca Schoenthal, The Fralin’s new curator of exhibitions.

Eschewing typical groupings by chronology or nationality, the exhibition highlights visual and thematic connections. A screenprint by American pop artist Roy Lichtenstein employs his signature benday dot technique (common in newspaper production) to evoke a Chinese landscape; it hangs near a seventh-century sculpture from China’s Tang Dynasty and two paintings from Rajasthan, India.

Nearby, two portraits of women display intriguing similarities despite originating in different time periods, with artists of different nationalities working in diverse media. Except for the common provenance of their owners, such pieces might never have been viewed together.

“Connections that might have never been made are being made within this exhibit, and it sheds new light on each of the pieces,” Schoenthal said. “You see them in brand new and extraordinary ways.”

Some pieces, like the Robert Henri painting, “Johnnie Patton,” a promised gift from former U.Va. Board of Visitors member W. Heywood Fralin and his wife Cynthia, played a key role in the development of an American artistic style in the early 20th century.

In 2012, the museum was renamed to honor the Fralins’ lifelong contributions to U.Va. and the extensive collection of American art that they intend to bequeath to the museum.

“We have always been interested in American art as a part of our national story, depicting national issues or values,” Fralin said.

Other pieces bring in artistic traditions from around the globe. Dudley and Lisa Anderson, who have a collection of more than 250 ceramic pieces, contributed a sculpture by Sir Anthony Caro, whom Dudley Anderson, a 1964 graduate of the School of Medicine, calls “one of the most noted British sculptors” of the 20th century, alongside his mentor Henry Moore.

J. Sanford Miller, a 1971 graduate of the College of Arts & Sciences, his wife, Vinie Zhang Miller and his daughters have spent more than a decade collecting Chinese ink paintings. Miller, who sits both on The Fralin’s advisory board and the Arts Council and co-chairs the U.Va. Arts Trust, also founded the Miller Arts Scholars program. The couple has loaned two of their collection’s best works for the exhibition: an ink painting by Wu Guanzhong and an ink scroll by Qi Baishi.

“Both Guanzhong and Baishi are very important artists in Chinese history,” Miller said. “They have very different styles, but both are outstanding, and these pieces are very characteristic of their body of work.

“I am looking forward to seeing other fine examples of work across so many different styles, brought together by U.Va.”

Many of the pieces reveal their owners’ career pursuits or lifelong hobbies. Commonwealth Professor of Architectural History Richard Guy Wilson and his wife, Ellie, contributed a painting of New York City’s SoHo neighborhood by muralist Richard Haas, along with a photograph by O. Winston Link and a comic by famed graphic novelist Art Spiegelman.

“The painting was done before SoHo really caught on, right when artists were beginning to move into the derelict neighborhood,” Wilson said. “It really caught my eye because SoHo is a great treasure trove of architecture.”

Commonwealth Professor of History Olivier Zunz’s collection began with his grandfather, an avid art collector. Some of the collection dispersed over the years and Zunz has diligently sought lost pieces and added finds of his own. One of his wife Christine’s and his contributions to “Cavaliers Collect” is a 13th-century sculpture of the ancient Chinese god Guanyin, considered a god of mercy, purchased by Zunz’s grandfather in the 1920s when fraudulent Chinese sculpture sometimes plagued the art market. Zunz recently confirmed that his piece is one of few from that time that genuinely originated in the 13th century.

“The aesthetic and sheer enjoyment of art is a major part of collecting, but the background is also significant – how a piece was made and how it relates to history,” Zunz said. “The exhibition should give a really good sense of the range of interests around the University and the art community. I am happy to see and contribute to that.”

The breadth of the exhibition reflects a heightened level of engagement with The Fralin, which now welcomes more than 24,000 visitors annually, including about 2,000 undergraduates. Plans are underway for a 16,000-square-foot expansion of the Thomas H. Bayly Building to add display space, classrooms and storage and event space for popular receptions like “Final Fridays,” which averaged 550 attendees each month during the last academic year.

“Bruce and his team have done a terrific job in developing the museum into what it is today, and I am particularly excited that it has become a popular hangout for a lot of students,” Fralin said. “The arts are very important to our culture, and I congratulate the University for remaining focused on all areas of education, whether it is science or technology or the arts.”