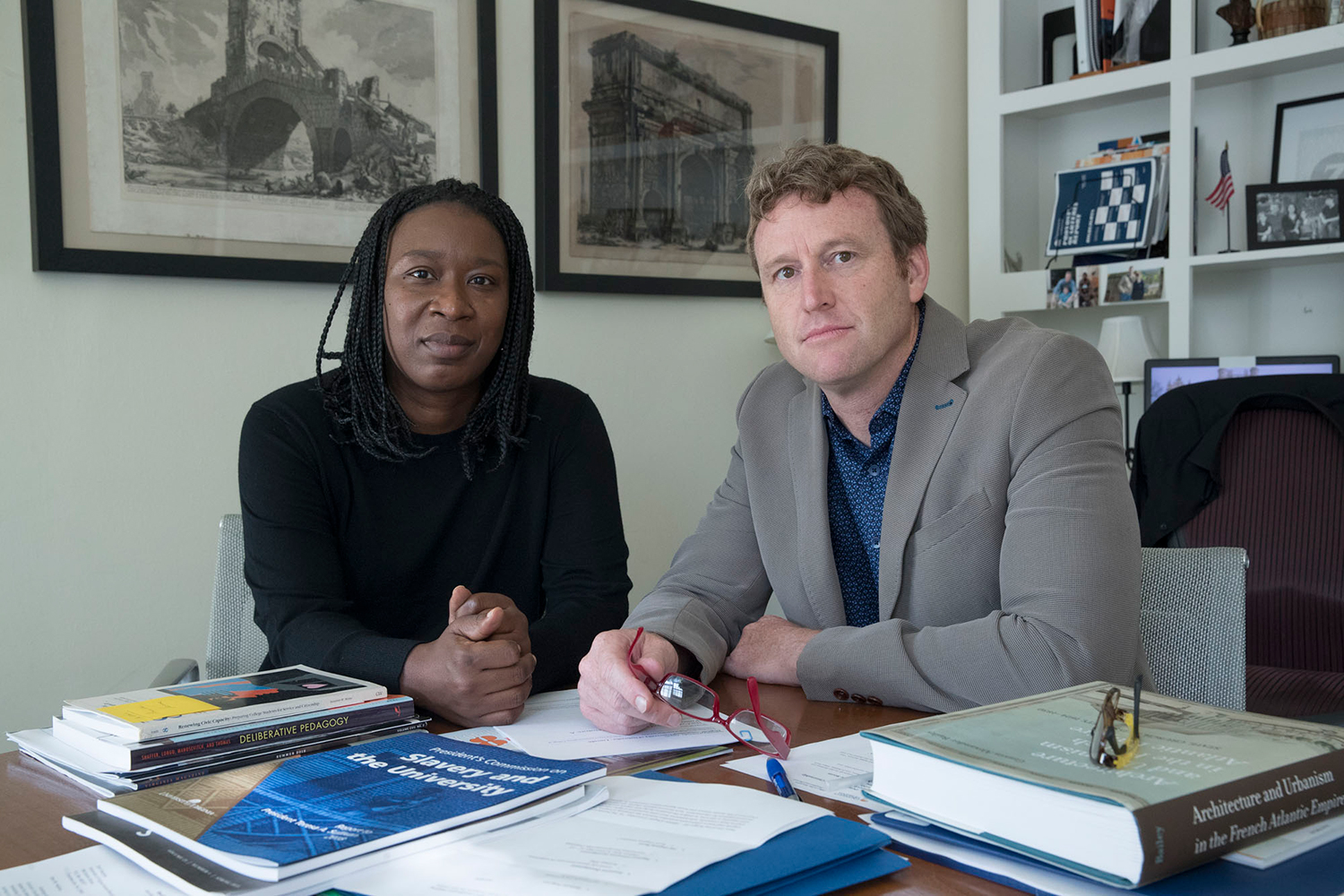 Nelson’s recent research has focused on slave life in the Academical Village and Harold’s has examined black political movements in the Jim Crow South. (Photos by Dan Addison, University Communications)

Harold, a professor who holds joint appointments in the history department and in the Carter G. Woodson Institute of African-American and African Studies, centers her research on African-American politics. Nelson, a professor of architectural history who has taught about slave life in the Academical Village, also serves as vice provost for academic outreach. He played a central role in organizing the “Dialogues on Race and Inequity” and in related initiatives over the past year.

At a recent public discussion, Harold said part of her interest in editing “Charlottesville 2017” was her desire to continue to address persistent injustices. 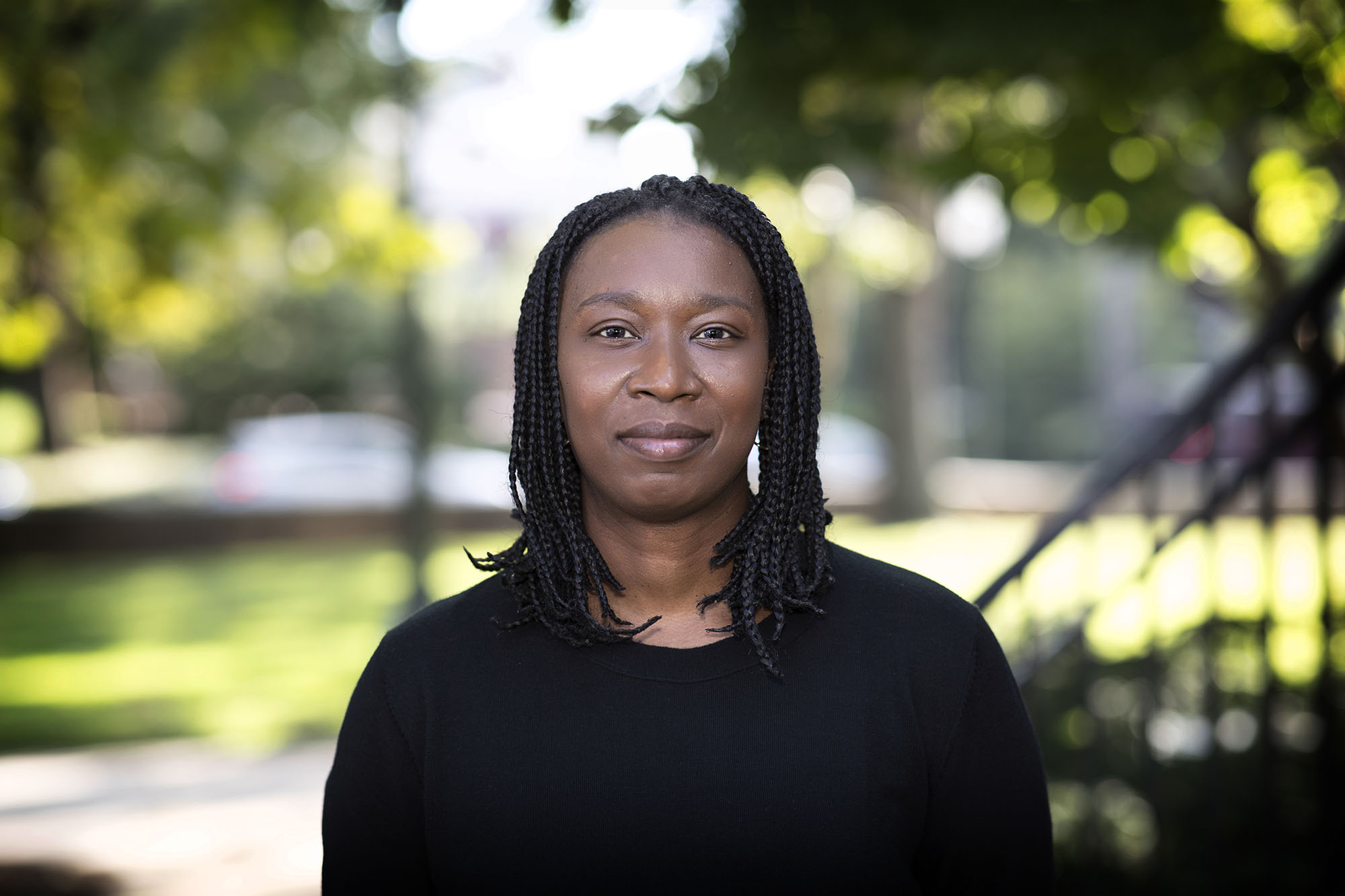 “I think about the world we want to create, and that’s what keeps me going,” she said.

“Charlottesville 2017” rolls out 14 essays from UVA professors in various schools and departments at the University.

Historian John Edwin Mason served as vice chair of Charlottesville’s Blue Ribbon Commission on Race, Memorials and Public Spaces that first called for removing the Confederate statues of Robert E. Lee and Thomas “Stonewall” Jackson from the city parks that bore their names. He argues for righting history with more information about African-Americans and African-American-associated places in telling the area’s history. Elizabeth Varon, associate director of the John L. Nau III Center for Civil War History, dismantles the myth of the “Lost Cause” and addresses Lee’s legacy in her essay, “The Original False Equivalency.” 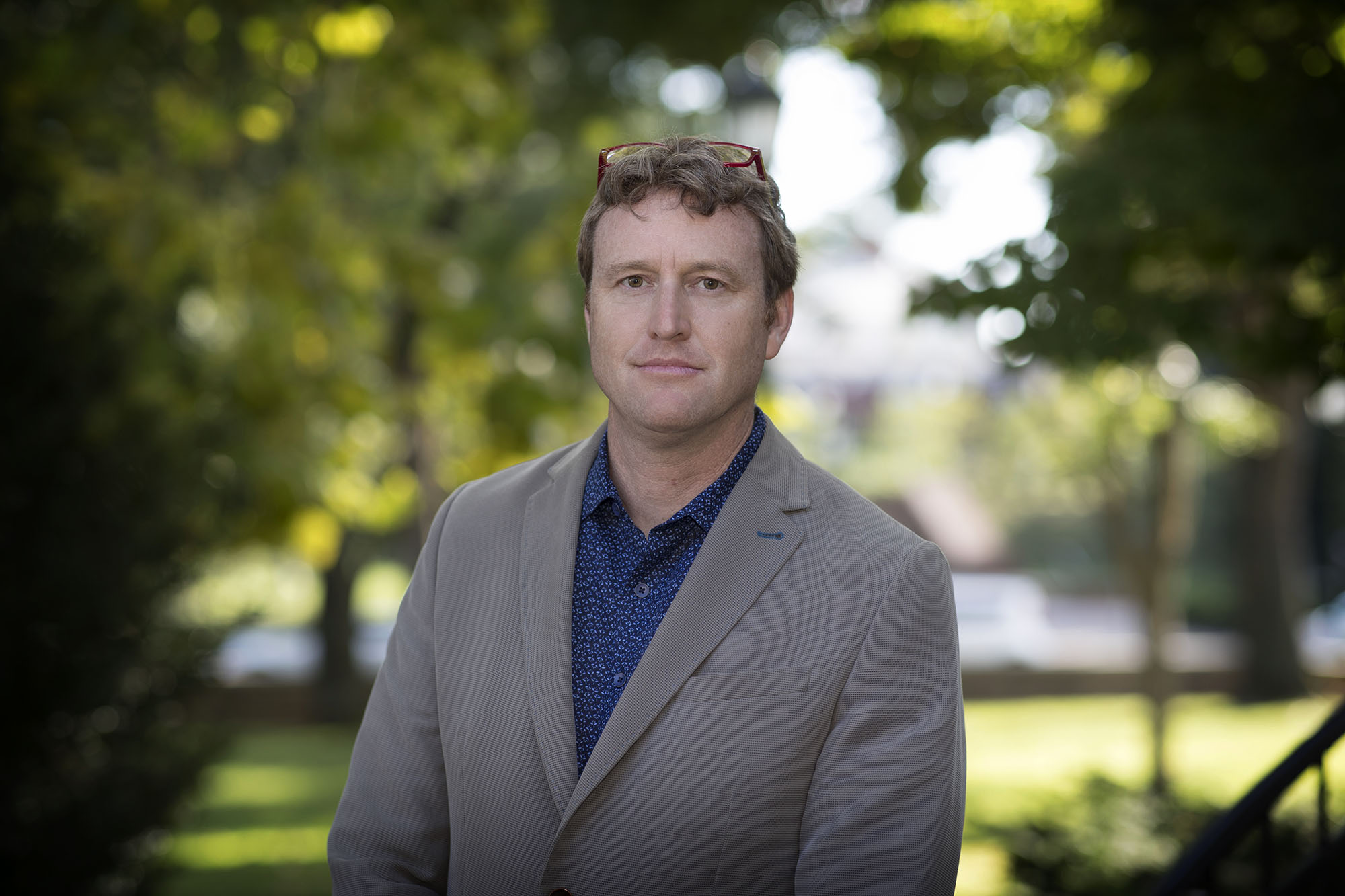 In “Where Do We Go From Here?,” School of Law Dean Risa Goluboff, who led the Deans Working Group in response to last summer’s events, uses the title from the Rev. Martin Luther King Jr. to analyze freedom of speech and the right to bear arms. Professor of Religious Studies Willis Jenkins’ essay, “Ethics Under Pressure,” gives his account of “moral trauma” as he stood guard outside St. Paul’s Episcopal Church across from the Rotunda on Aug. 11, 2017. In addition, the book includes a foreword by history professor Grace Elizabeth Hale, who researches the American South and segregation, a chronology by Harold and an introduction by the editors.

UVA Today checked in with Nelson and Harold about their involvement in the book.

Q. How did the book come about? How did you end up working together on this project?

Nelson: This book found its genesis in the “Dialogues on Race and Inequity,” hosted by the Office of the Provost and intended to be held throughout the day on Aug. 12, 2017. Unfortunately, the programming had to be postponed because of the state of emergency, but the entire program was offered about a month later.

These were a wide-ranging series of discussions, lectures, film viewings and performances primarily by UVA faculty and staff, intended to engage the legacy of race and inequity at UVA, in greater Charlottesville and across the commonwealth. More than 30 faculty and staff-led topics ranged widely and included community polarization, local history and the ethical conditions of public institutions, in addition to a series of films: “White Like Me,” “I Am Not Your Negro,” “That World is Gone” and “An Outrage.”

After the program concluded, a lot of folks approached me about collecting some of the presentations together as a volume, but there was no way I could undertake such a heavy lift alone. Claudrena Harold agreed to co-edit it and it was a partnership from that point forward. We both share the conviction that the past shapes our present in difficult and troubling ways. We cannot begin to know the depth of those legacies in the present until we are honest about our past.

Harold: Working with Louis Nelson and the contributors was a pleasure.

When initially approached with the opportunity to serve as a co-editor of the volume, my thoughts turned to a favorite quote from Armstead Robinson in his book, “Black Studies in the University: A Symposium,” a historian of the Civil War, a pioneer in the field of black studies, and the founding director of UVA’s Carter G. Woodson Institute of African-American and African Studies:

“Educational institutions in this society have necessary and inherent political and social obligations. As educators you represent financial power, community influence and social prestige. If your function of equipping students to cope successfully with reality is to be fulfilled, then you must not only be responsible, in terms of your educational functions, but you must also be responsive to the communities you supposedly serve.”

This volume provided me with another vehicle to fulfill this responsibility as part of a collaborative effort.

Q. How did you decide who would be included?

Nelson: Because of our goal to have a book published before Aug. 12, 2018, we knew we would be on a tight timetable. As a result, it was important for us to draw heavily from the various presentations and lectures that faculty had already prepared for the dialogues. But at the same time, it was clear that many of us had questions about the role and scope of the law in the public sphere, so those few additional essays that we invited were from those with legal expertise.

Harold: The publication schedule was tight, but the contributors were incredibly gracious in meeting our time constraints.

It was a deeply humbling experience to work with a community of scholars willing to set aside their precious time to help us facilitate a deeper understanding of the events of Aug. 11 and 12, situate them in a broader historical and political context and offer suggestions for creating a more just world. Their generosity of spirit means a great deal to me, and I am eternally grateful for their contributions.

Q. Did you ask people to write on a certain aspect of the topic?

Nelson: We invited the authors to speak through the lens of their scholarly expertise. While the burdens of a public university in these kinds of situations are many, one very clear responsibility is to bring scholarly rigor as part of our critical response. It was important to us both that the faculty authors write with accessibility, but also with authority.

Harold: In addition to writing an essay on the history of African-American activism at the University of Virginia, I worked a great deal on the chronology. The publisher wanted to ensure that the readers of the book could put the events of Aug. 11 and 12 in a broader historical and political context, and so it was very important that we have a very detailed timeline. The very act of listing the events of Aug. 11 and 12 – minute by minute – stirred up a variety of emotions. I was not in Charlottesville at the time, so recounting the events engendered a unique sensation within me, a sensation I still struggle to explain.

With regard to the chronology, there were joyous moments – for example, detailing the incredibly rich and vibrant social and political world Afro-Virginians created in order to turn their freedom dreams into a reality – but there were other moments when enumerating one white supremacist act after another proved emotionally taxing. This was not easy work, but it was necessary.

Q. How did the sections come together? Did you see them after collecting the faculty essays?

Nelson: We struggled with a variety of frameworks for organization, but at the end of the day these four just made sense to us as both framework and process – “Remembering: Historical Considerations,” “Speaking: Political Perspectives,” “Listening: Critical Engagements” and “Responding: Ethical Commitments.”

Q. How are you spreading the word about the book?

Harold: It is my hope to have additional conversations that include the authors, the larger UVA community and greater Charlottesville. I encourage dialogue, including critical ethical reflection about our responsibilities in this moment.