Christmas Wreaths on Labor Day: Why Do Companies Push Seasonal Items So Early? 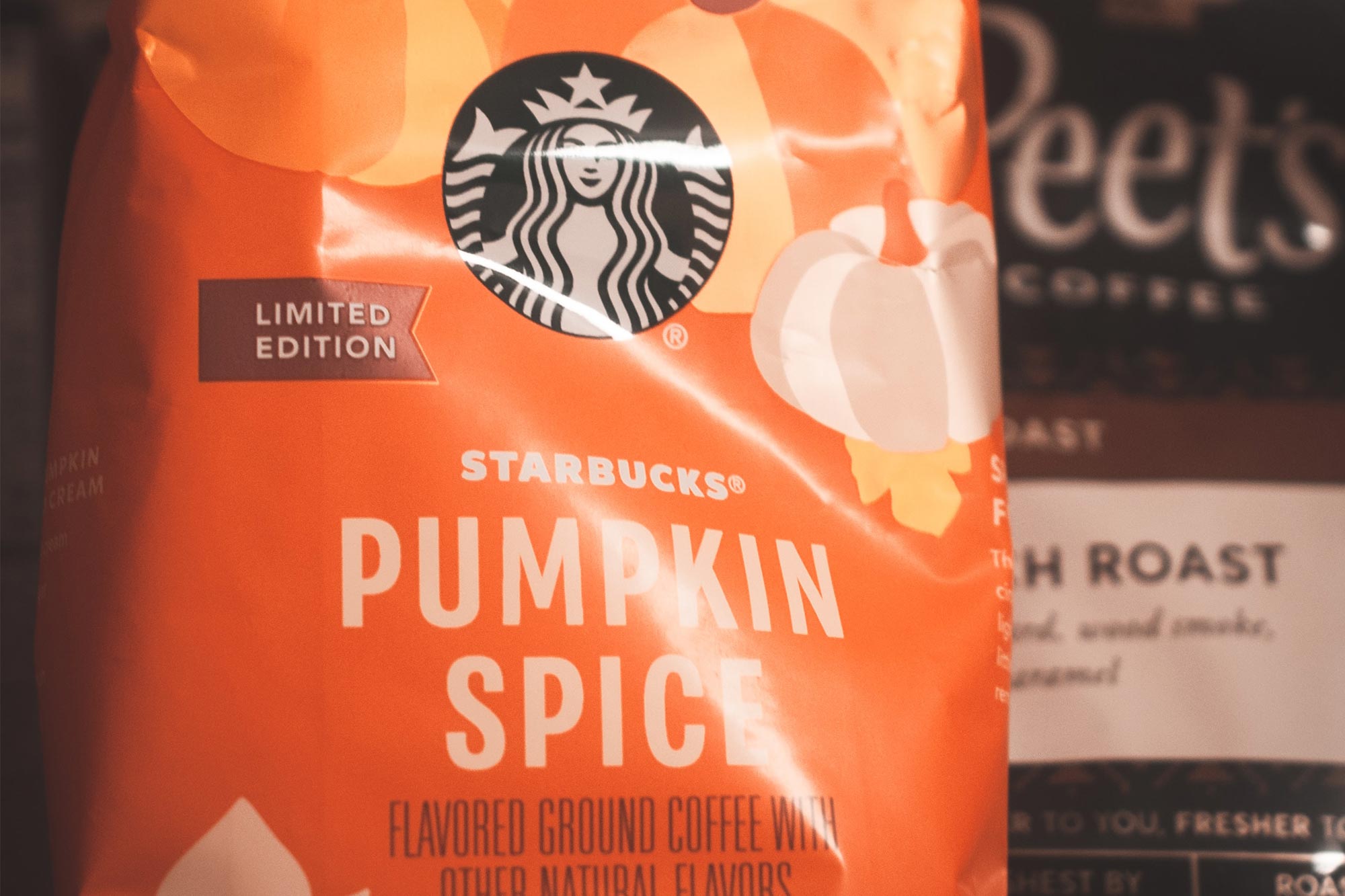 If you’ve been to a grocery store in the past two months, you’ve probably been re-introduced to pumpkin spice-flavored foods and beverages. (Stock photo)

Christmas lights, boxed and available in both white and multicolor, lined one shelf. Wreaths, decorated with red bows and artificial pine cones, hung from another.

It was Labor Day.

This UVA Today writer’s recent trip to a local Target sparked a series of questions that were then passed on to a marketing expert within the University of Virginia’s McIntire School of Commerce.

The goal here was to discover reasons behind why seasonal items are seemingly pushed by retailers earlier and earlier each year.

“The longer items are on the shelf, the more opportunity retailers have to engage in price discrimination,” said McIntire’s Jeffrey Boichuk, an assistant professor of commerce whose research interests include the areas of business-to-business marketing, marketing analytics and sales force effectiveness. “Customers who are excited about decorating early are less likely to be price sensitive, so they’re more willing to pay full price. Those who shop last minute are more likely to be bargain hunters, so they are more likely to purchase seasonal items late in the season when they’re discounted.”

On the concession side, there’s perhaps no refreshment more symbolic with this early season approach than the pumpkin spice latte. Making its Starbucks debut in 2003, a version of this festive beverage is now made by a variety of coffee and donut shops, and convenience stores.

7-Eleven was the first national chain to offer pumpkin spice lattes this year, according to RetailBusinessOnline.com. The fall staple could be ordered there on Aug. 5, just over a month after your Independence Day cookout.

Boichuk, through Google Trends research, found that interest in pumpkin spice lattes spikes in the second week of August when “companies reintroduce them to their menus. This search interest is likely derived from marketing budgets, not from unmanipulated consumer behavior,” he said.

As part of an integrated core experience course within McIntire, Boichuk stresses to his students to honor the marketing discipline’s first law: “Don’t sell what you happen to make; make what the consumer wants to buy.”

“A customer-oriented strategy is one that adapts to customers’ needs and wants,” Boichuk said. “Launching products that aren’t a response to customer demands can be considered a product-oriented strategy. Celebrity endorsements can often be classified as manipulation.” 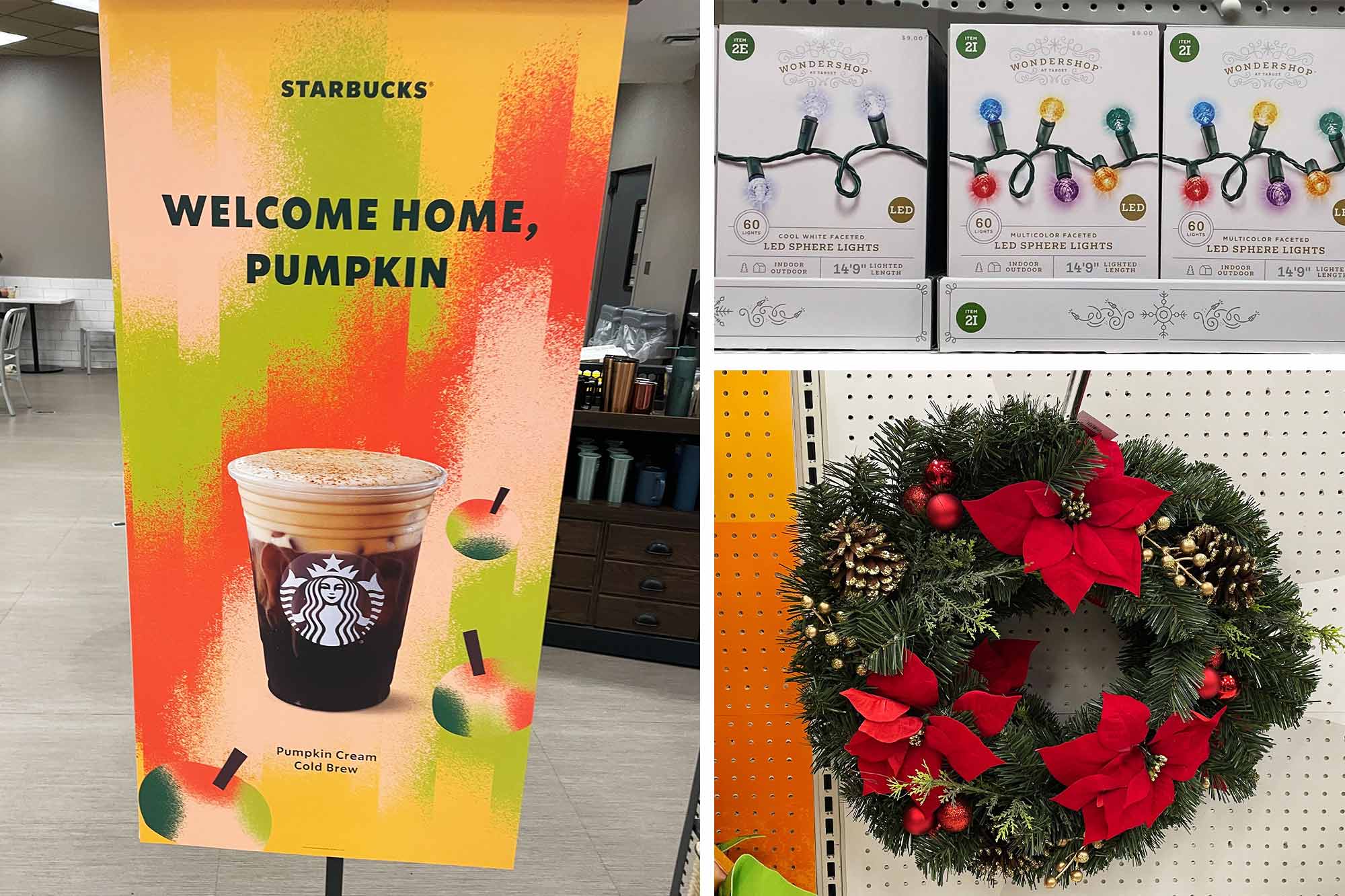 A Labor Day trip to Target revealed that the retail chain was already in the holiday spirit. (Photos by Andrew Ramspacher, University Communications)

There have been recent examples of both, Boichuk said, referencing Starbucks’ new fall menu that includes drinks that are cold or iced to provide an alternative to the typically piping hot coffee choices, as well as clothing company Draper James featuring its founder, actress Reese Witherspoon, in an Instagram post to help shift purchases for its fall items to earlier in the year.

Witherspoon’s caption: “She’s a 10, but she breaks out the fall candles in August 🍂🤷🏼‍♀️.”

Welcome back pumpkin. 🧡 For the love of Fall, order your Pumpkin Spice Latte or Pumpkin Cream Cold Brew now. pic.twitter.com/MOTGx9zeC9

“Menu changes and celebrity endorsements suggest that brands are trying to warm consumers up to the idea of getting in the fall and holiday spirit sooner,” Boichuk said.

Observations from that Labor Day Target trip on Sept. 5 also included a section dedicated to Thanksgiving cards as well as a deep selection of Halloween-themed items and foods, from a decorative pumpkin with “Let’s snuggle and watch scary movies” written on it to “Count Chocula” and “Franken Berry” flavored Pillsbury cookies.

Boichuk said he’s not aware of any research that has addressed whether festive concessions or items benefit more from the early season push.

At UVA, There Is a Club for Everyone END_OF_DOCUMENT_TOKEN_TO_BE_REPLACED