Class of 2013: Obama-Approved, Edward Smith Grows His Passion for Politics 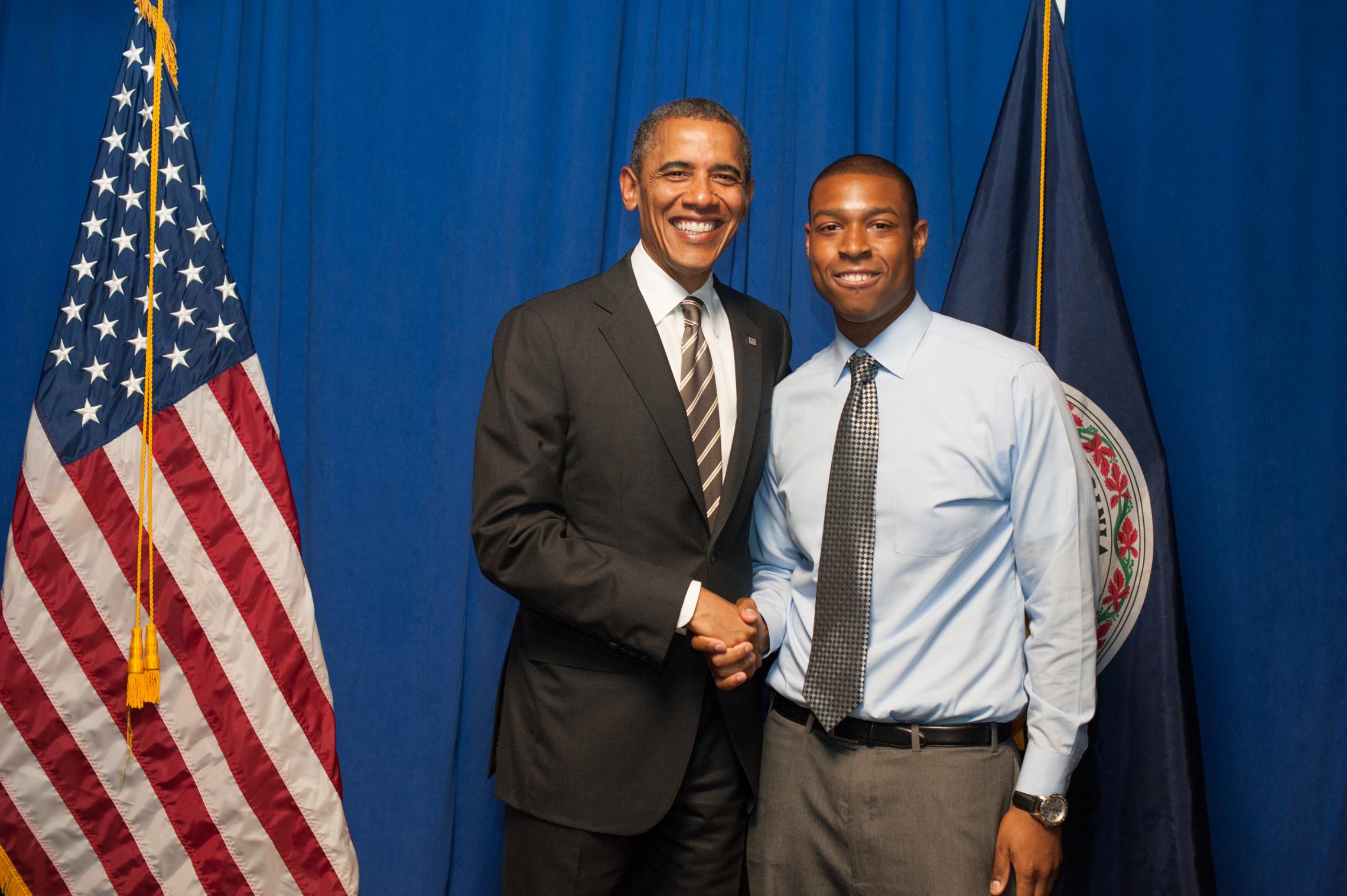 Not many students start their thesis with a quote from a face-to-face conversation with President Barack Obama, accompanied by a photo of the student shaking hands with him. But for Edward Smith, an Echols Scholar and politics honors major at the University of Virginia, it seems like a fitting culmination of a passion for politics kindled as a high school student volunteer for Obama’s 2008 campaign near his hometown of Hampton.

Smith’s interest in politics was also sparked by a far more somber event: the 2006 death of his mother, Juwanna, from a rare liver disease known as amyloidosis.

“Through her career as a registered nurse, I came into contact with patients who were unable to obtain adequate health care due to circumstances beyond their control,” he said. Her death “motivated me to find a career path where I could combine my interest in politics to promote extended health coverage.”

Smith has immersed himself in politics and political science since he arrived on Grounds as a first-year student in the College of Arts & Sciences, when he took politics professor Larry Sabato’s legendary “Introduction to American Politics” course, and then interned with Sabato’s Center for Politics.

In his second year, he was one of six students in the Class of 2013 admitted to the Politics Honors Program, which requires a fourth-year thesis.

A Raven Society member, Smith went on to complete three independent research projects on politics, two of them funded by competitive grant awards. As a second-year, for an independent study with Karlin Luedtke, assistant professor in the Women, Gender & Sexuality interdisciplinary program, he examined how the Great Recession impacted women and minorities differently than other groups.

Then Smith won a Sen. John W. Warner Public Leadership Undergraduate Research Award, given annually to a third-year undergraduate who exhibits a serious ambition to seek public office in the future, to fund a major research project. Smith used the award for his thesis research on voter ID laws.

Unsure whether he will pursue graduate education in law school or public policy school, after graduation Smith will work as a paralegal in a Washington law firm to “give me both law and policy experience, while also giving me time to figure out the best path for grad school,” he said.

Smith was able to spend a minute with Obama last summer when Obama visited Charlottesville for a campaign rally. “He asked me my name and what I was studying,” Smith said. “I answered political science with a focus on political equality. He responded, ‘That’s wonderful. ... We need to make sure everyone gets a fair shot, Edward. That’s what this campaign is all about.’ I used this quote to begin my thesis.”

Smith’s thesis examined the effects of Republican-led pushes in many states to enact stricter voter ID regulations ahead of the 2012 election, criticized as efforts to reduce turnout among low-income and minority voters who tend to vote predominantly Democratic. In the 2012 election blacks actually voted at a higher rate than whites, Hispanics or Asians, and were the only group with increased voting participation compared to the 2008 election, according to a new U.S. Census report released last week, which was not available to Smith while writing his thesis. Even without the Census report, Smith had made a similar conclusion about turnout rates, which he hypothesized were spurred by indignation and anger among African-Americans at the efforts to make voting more difficult.

“Edward’s thesis would have been much easier to write if he had been able to wait until after the Census report was released,” explained his thesis adviser, politics professor Paul Freedman. “Instead, he had to be a detective, piecing together the story of turnout in the 2012 election through careful analysis of exit polls and other available data. But Edward is a keen observer of politics and did a first-rate job.”

Along with Smith’s vindication by the new Census report, about 10 days ago, Vice President Joe Biden was quoted explaining how both he and Obama have reached conclusions similar to Smith’s.

With Smith’s passion for politics, one day his opinions may well reach the desk of a sitting president.