Class of 2013: Segura Networks His Way from Peru to the U.S. Supreme Court 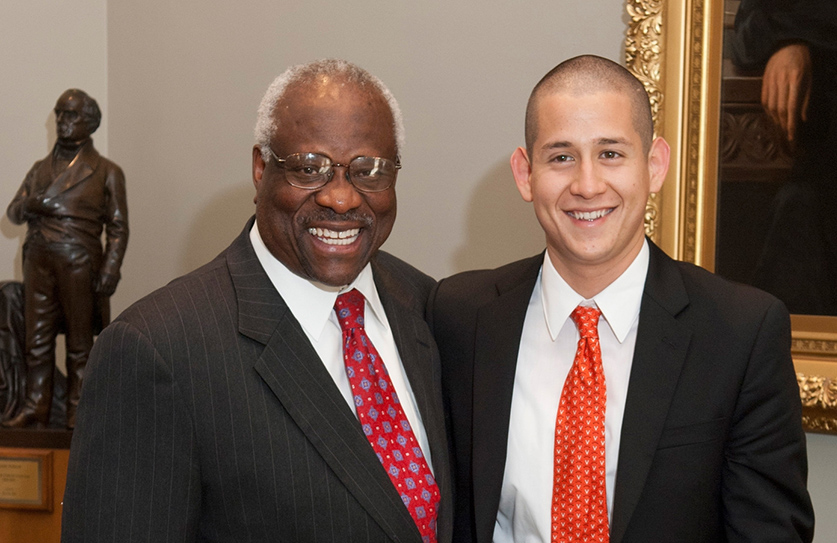 Heading into his last week of final exams at the University of Virginia, Marco Segura wore a brace on his left ankle for the minor pain that lingered six weeks after he ran, with little training, the Rock ’n’ Roll USA Marathon in Washington, D.C.

This summer, before starting a graduate program in nonproliferation and terrorism studies at the Monterey Institute of International Studies in Monterey, Calif., he aims to complete a longer trek along El Camino de Santiago, a Christian pilgrimage route in Spain.

Neither trek compares, however, to the journey that took Segura from Lima, Peru to an English as a Second Language program at a Northern Virginia high school, where the dream of not only going to college, but thriving at one of the top public universities in his new country, started with the goal of learning a new language at 14.

Eight years of ambition and persistence later, Segura, 22, has a resume stuffed with Capitol Hill internships (in the offices of Sens. Mark Warner and John McCain, and Rep. Raul Grijalva), three years of service as U.Va. Student Council representative for the College of Arts & Sciences and a memorable summer in the University’s Sorensen Institute for Political Leadership’s College Leaders Program.

For the American studies and government major graduating this month, the headiest moment came last summer, when he was awarded an internship in the U.S. Supreme Court Clerk’s Office.

“I never, honestly, never in my life would have thought I would intern at the U.S. Supreme Court. It was a dream,” Segura said. “I grew up in the Third World never thinking this would be my life. I think my role in the future will be to show kids it’s possible.”

Segura’s parents are lawyers by education, but when his mother lost her job in Lima, Segura said they obtained visas and permanent resident status to move to the United States, where Segura’s aunt and her children lived in Fairfax.

Segura arrived in Fairfax ahead of his mother and slowly began to pick up English riding the bus to Robinson High School and watching the news and “ESPN SportsCenter” at his aunt’s house, where he lived in the basement. He started his high school career in the public school’s English as a Second Language program with little thought of where he would be five years later, he said.

As his older cousin began receiving letters in the mail from prospective colleges, however, Segura began to imagine that college was within reach, especially as his English improved and he advanced out of the ESL program. Robinson’s career center counselors started talking to him about “this U.Va. place,” and the seed was planted.

Segura’s ability to win over potential mentors began in high school. He made a point of visiting guidance counselors daily, lingering after class with favorite teachers to discuss current events, geography – anything to keep the conversation going.

Julie Roa, who was working at that time in the outreach office of U.Va.’s Office of Undergraduate Admission, said Segura found her as a point of contact, emailed her frequently and came in person to every college fair and recruiting event that she attended in Northern Virginia.

“He understands the power of relationships, so he was very purposeful in building a relationship with myself and my boss, the director of outreach,” said Roa, who now works as the program coordinator for multicultural student services in the Office of the Dean of Students. “He said, ‘Look, I know it’s not going to be easy for me to get to U.Va. Can you help me craft my path?’”

Segura was advised to repeat a grade in high school so that he could display an ability to handle Advanced Placement-level work by the time he was a senior. Segura took the advice, and after being admitted, he enrolled in two summer classes before the official start of his first year.

“He just started building relationships from the first second he was here,” Roa said. “He made a lot of friends that summer, went around meeting many people. He had a vision of where he was going to be by the time he graduated, so he wanted to meet any key people. He was doing research on who all the movers and shakers were.”

Faculty member Penny Bowles, the assistant director of student academic support, said she recalls Segura walking across Grounds at a faster pace than the other students around him, as if he were walking with intention.

“I would say Marco would be in the top 2 percent of the students in terms of motivation and engagement, just really being fully involved in his education,” Bowles said.

Segura acknowledged with a broad grin that one of the nicknames he picked up on Capitol Hill as a Congressional intern three years ago was “Schmoozie,” because of his gregarious personality and eagerness to network.

That ambition is not clouded by a social-climbing tunnel vision, however. As a Supreme Court Clerk’s Office intern, Segura was just as quick to linger to chat with an elevator operator or marshal’s aide as he was to relish his access to Supreme Court justices.

“From the bottom to the top here, everyone loved Marco,” said James Bolden, supervisor of the Supreme Court Clerk’s Office.

As he ran for Student Council his second year, Segura was quoted in The Cavalier Daily as saying, “In a perfect world of ‘Marco-land,’ I would have presidents of different organizations emailing each other, spreading ideas and diversity.”

Later in his tenure as an elected representative, he sponsored a unanimously passed bill endorsing the protection of the University’s transgender community and a day of silence to combat discrimination against transgenders.

One of his most memorable U.Va. experiences, Segura said, occurred last summer as he tried to explain to his Sorensen Institute classmates from other colleges the upheaval taking place on Grounds.

On June 18, eight days after U.Va. President Teresa A. Sullivan’s resignation was announced, Segura said he encouraged his Sorensen classmates to join him on the Lawn the day Sullivan was scheduled to address the Board of Visitors.

“We were the first ones there, and we were just hanging out for 20 minutes near the steps of the Rotunda when this huge sea of people came up the Lawn,” he recalled.

Sullivan walked up the Lawn where more than 2,000 people had gathered in support of her, and Segura tried to teach his Sorensen classmates the “Good Ol’ Song” as they rocked back and forth in the crowd.

After completing his pilgrimage walk this summer, Segura will move to Monterey and begin his graduate program by studying Arabic. His eventual goal is to become an officer in the U.S. Navy.

Daniel Chavez, U.Va. assistant professor of Spanish and American studies, who taught Segura in three of his American studies and Latino studies courses, said he expects that intellectual curiosity and an eagerness to serve will continue to drive Segura.

“Marco has a very interesting attitude toward not knowing,” Chavez said. “Not knowing is not a problem. Not trying is a problem. He asks, and he serves. He’s interested in pursuing ideas and asks questions to the people in charge who might be interested in his case.

A Year We Will Never Forget: 2019-20 in Review END_OF_DOCUMENT_TOKEN_TO_BE_REPLACED

‘What Will You Carry With You?’ Remarks From UVA President Jim Ryan END_OF_DOCUMENT_TOKEN_TO_BE_REPLACED