Class of 2015: Choosing U.Va. ‘For All the Wrong Reasons,’ Calhoun Thrives 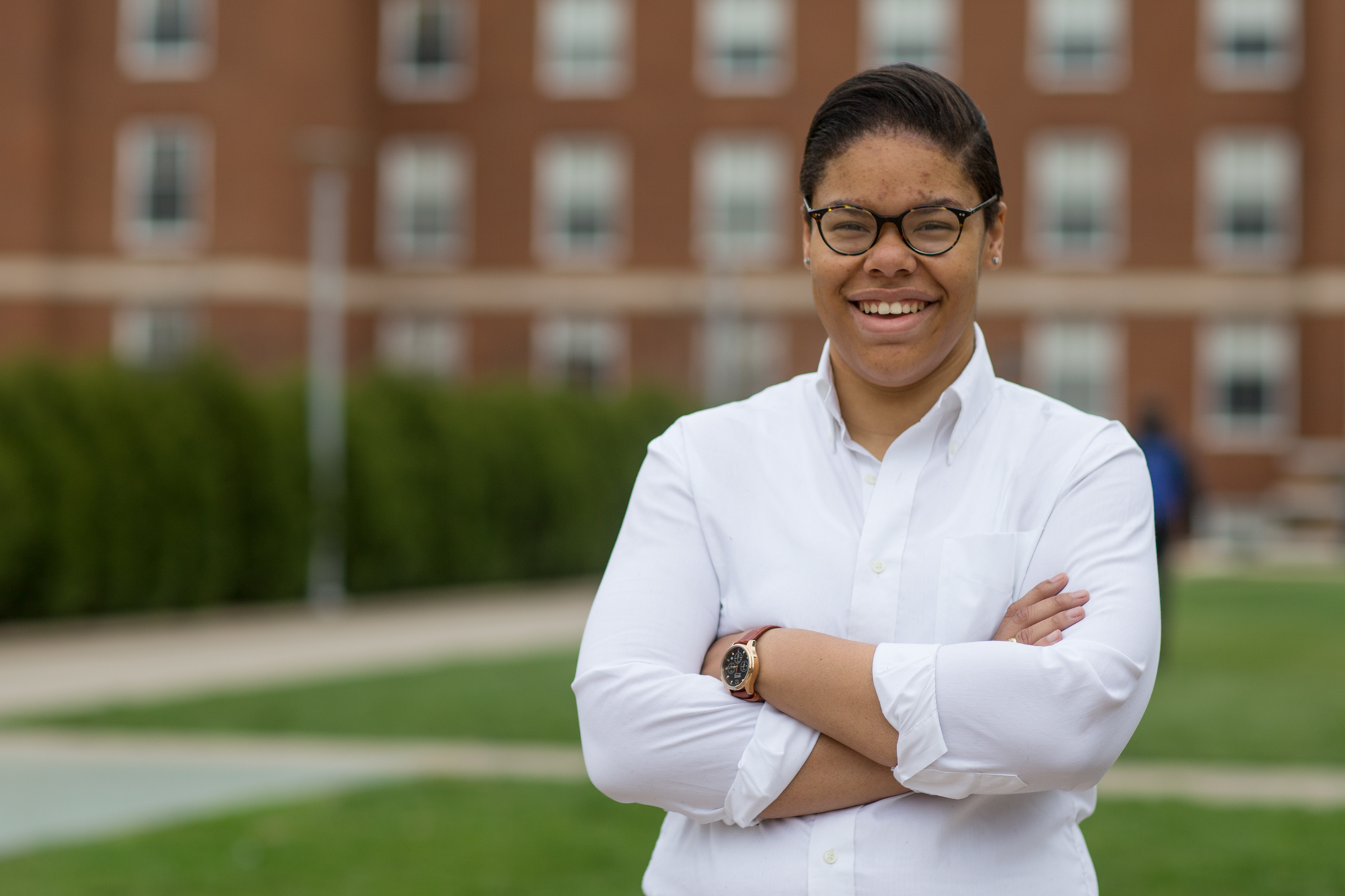 Blake Calhoun will graduate from the College of Arts and Sciences in May. She will return to U.Va. in the fall to begin her masters at the Frank Batten School of Leadership and Public Policy.

Blake Calhoun, from Chesapeake, is tying up her undergraduate experience at the University of Virginia – and it has been a busy one. Despite being chair of the Minority Rights Coalition, a Sustained Dialogue moderator, a College of Arts & Sciences representative on Student Council and the former co-president of the Queer Student Union, Calhoun claims to have “fallen” into leadership positions at U.Va., rather than considering herself a natural leader fit for the positions.

But as she prepares to head to the Frank Batten School of Leadership and Public Policy in the fall to pursue a master’s degree, it’s clear that her impact on U.Va. is far from complete.

Q. Let’s start from the beginning. Why U.Va?

A. I came here for all the wrong reasons. I wasn’t a confident person in high school; all I did was go to school. So when all the [admissions] decisions came back, I said, “I want to go to the highest-ranked school that I got into.” That was the absolute worst way to decide something and I’m incredibly lucky it worked out. I don’t even remember what my tour was like.

Q. So you weren’t sure what to expect when you came to U.Va.?

A. No idea. I came here and I didn’t know what an internship was. I didn’t know people did research. I couldn’t tell you what a thesis was. I just didn’t know these things.

I got advice when I came here, which ended up being helpful for me: Take the classes that I thought sounded interesting and find my way my first year.

Q. So you took the advice?

A. Yes. I ended up meandering around my first year. In hindsight I could have had a more solidified academic course, but as far as outside school, the advice was invaluable. I just sort of stumbled into things.

Q. What organization do you think has had the greatest impact on you?

A. Sustained Dialogue has meant the most to me. I joined because one of my friends during first year asked me to, because they needed people.

I didn’t realize that I didn’t have an outlet to explore the ideas that were bouncing in my head until I had one. I started to look forward to going every week. It was something that I really needed in my first year.

[Sustained Dialogue] is a group where I could go and say what I felt and hear people that I would have not met otherwise. I don’t mean that in a hyperbolic sense; these are people who come from all places of U.Va., and I would never have attempted to meet them. People I didn’t know that I needed to know.

I’ve since been a moderator, helping people get to the point of grasping something, concepts and experiences here.

Q. Of course you’ve had major impacts on other CIOs as well. What was it like taking on major leadership roles in the Queer Student Union and the Minority Rights Coalition?

A. My first position in QSU was social chair during my second year, and it just sort of happened that I fell into being co-president my third year. I loved QSU because I thought that we could be so broad and attract everyone, but attracting everyone causes an issue of retention. I started to want more out of the organization, but I don’t think I was in the position to do that.

I always said that I wasn’t interested in how many people were in the room, but I just want people to know that QSU is a resource.

This year, more people know about the things that are here. Every professor, every TA should know that QSU exists because it is such a common resource. I think it was being unused because people didn’t know it was here. It changes people’s perception of [U.Va.] just knowing that QSU exists.

Q. And how about Minority Rights Coalition?

A. I was looking for something else to do in my fourth year. One of my main frustrations in QSU was the lack of intersectionality [of different groups of people with one another] in the interest of attracting more people. QSU is a part of MRC, and I knew that they were looking for a new chair. I had the experience in managing an exec board and I was in a place where I felt that I was ready to overhaul something.

I remember thinking that MRC was a joke; they didn’t even have a bank account when I came in. MRC has taken a drastic turn.

The rooted purpose is to grow intersectional involvement and to find the nuances that each individual group might not be able to explore on their own. We help the groups cherry-pick and grow those nuances. Then there is also just strength in numbers.

It is difficult for minority groups to exist on their own because things can be so tenuous and fragile. So when they come together and think, “What can we be doing for each other?” it is a powerful thing.

Q. Your extracurricular experiences stemmed from helpful advice. Did the advice apply within the classroom as well?

A. I was pre-med when I came to U.Va. It wasn’t working out, the way it usually doesn’t work out. I fell off the pre-med wagon and the only thing I was qualified to major in was sociology at the end of my second year, first semester.

The classes that I’ve taken in sociology are the most fascinating classes I’ve taken in my life. It’s just thinking. That makes it sound stupid, but it’s such an intellectual challenge.

People joke that every paper is “How does this make you feel?” - but that’s a really hard thing to write about. I never thought about these things. I’ve really applied that to everything else in my University experience. [It’s about] challenging the things that you think you know, because maybe you [don’t know those things].

My favorite class was “Social Theory”; my professor said, “Science is attempting to make an objective truth out of subjective reality.” That blows my mind. Before college I was taught that science is objective and has legitimate authority. Sociology is the things I think that aren’t really true or can’t be proven. Sociology is the kind of things we all know exist, but we put names on it as theory.

Q. And you taught a course last semester, correct? What was that like? What would it have been like to be one of your students?

A. The first thing I said in the class was, “If this is your most important requirement, it shouldn’t be.” I was trying to teach a class that I wish [was at U.Va.] – a class that was taken with the level of seriousness it deserved. So this was a one-credit, no-credit-or-credit class. I wanted my students to engage more than anything else.

The title of the class was “Were We Really Born This Way?: Performing Gender and Queer Sexuality,” a play on Lady Gaga’s song, “Born This Way.”

We talked a lot about gender as performance, which it really has to be. We dress mostly in clothing and ascetics and surface-level things so that I can look at someone and say, “I think she’s female.” That feels natural to people, but it feels unnatural and borderline rude to look at someone and gauge their sexuality. I don’t think that we should assume anyone’s gender or sexuality, but it’s naïve to act like we don’t do it.

I wanted to visualize sexuality in its most stereotypical form. I wanted to break these things down and talk about them.

We also talked about the way that a minority treats itself. It was about minority-to-minority interactions and experiences.

Q. Your U.Va. experience isn’t over yet. You’ll be attending the Frank Batten School of Leadership and Public Policy for the two-year masters program. What are your future plans with a master’s in public policy?

A. I eventually want to go into student affairs in higher education. I’m so enamored with student leadership, especially at a place like [U.Va.] where leadership seems like a requirement for relevance. No one asks, “What are you studying?” They ask, “What do you do?”

I don’t know if that is right or wrong, but I’m interested in how universities set it up to be that way. People come to U.Va. and assume they have to join at least four organizations to have relevance and success here. I snuck in the back door of student leadership. I wasn’t part of the “top-tier” organizations. There are prescribed things for success here; I see people striving toward it, but not talking about it in a way that I wish we would.

A. I’ve had my most enjoyable time on Skyline Drive. It’s not really a place; it’s a road. It’s half an hour each way. My friend and I went there last night and just sat there and just looked at an overhang.

I’ve had the most clarity there and the best conversations. If I could think of moments in my university time where I’m purely happy, I would think of Skyline Drive.

Q. What is your most memorable moment at U.Va.?

I went to convocation because I couldn’t stay away. I remember just looking at all these people who were about to start something that I thought I was about to finish, since I didn’t know I would be completing my master’s. I was at the Lawn and I hadn’t been there for awhile. It was just a special day.