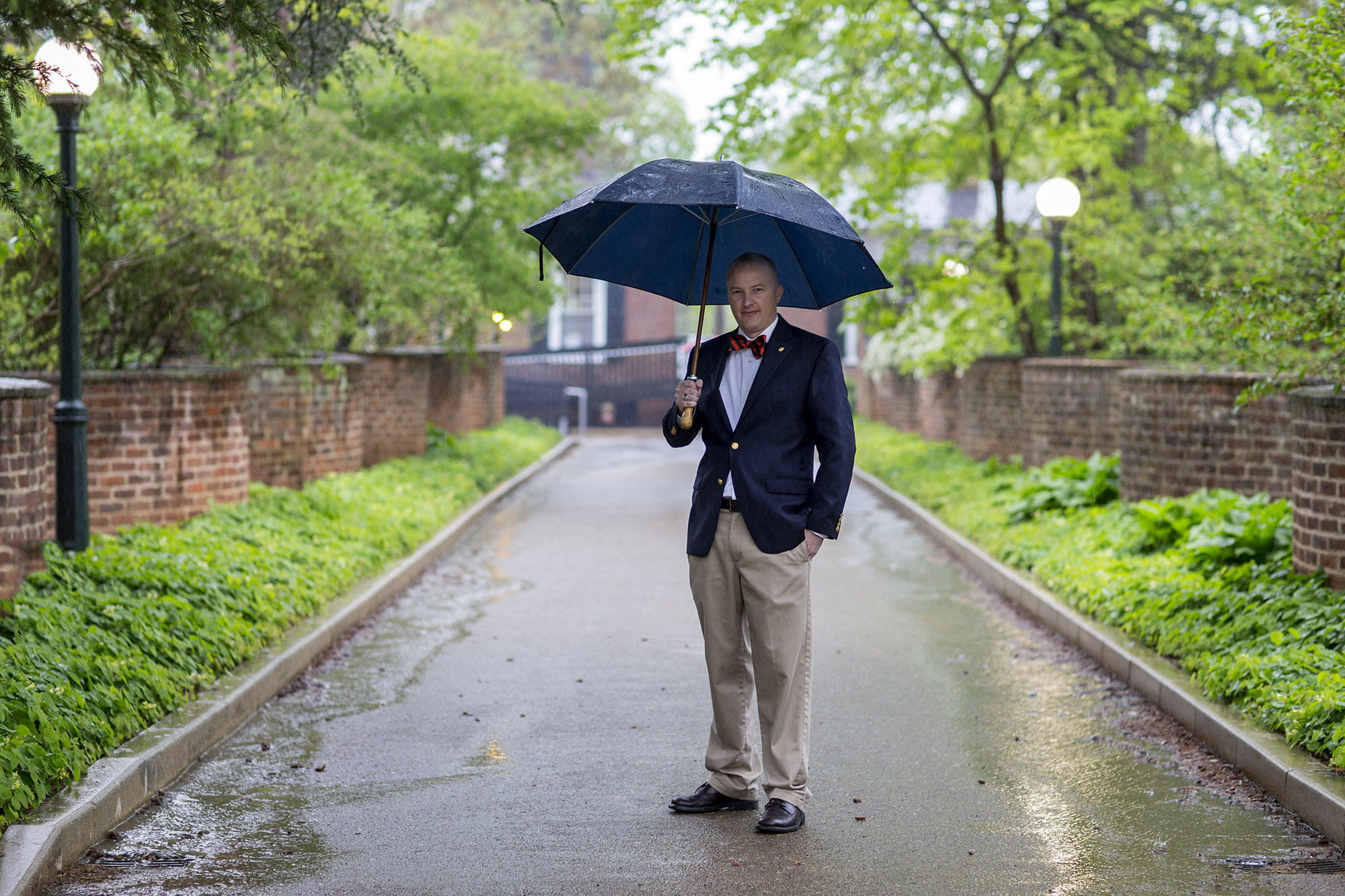 Jason Woodle will walk the Lawn Sunday, earning a Bachelor of Interdisciplinary Studies degree from the School of Continuing and Professional Studies.

Editor’s note: In the run-up to Final Exercises on May 16 and 17, UVA Today will introduce readers to some of the outstanding members of the Class of 2015. All of the stories, plus other information about Finals Weekend, are compiled here.

After graduating high school in Richmond in 1993, Jason Woodle studied briefly to be a nurse at Virginia Commonwealth University, then worked as a financial analyst at a large corporation and traveled the country as a point person for the corporation, opening new business locations.

But something was missing: a college degree. “I was watching people being promoted around me and it was frustrating,” he said.

During a recent park bench conversation near Newcomb Hall, one day ahead of his son Connor’s third birthday, Woodle shared his story with UVA Today.

Q. Why did you decide to study at the School of Continuing and Professional Studies?

A. When I was at Carmax, I realized that without a college degree I would be unable to advance my career. My wife graduated from U.Va. with a degree in foreign affairs. As a graduate and someone who gets the alumni magazine and keeps up with everything, she found out about the Bachelor of Interdisciplinary Studies program. I decided I wanted to enroll and created a plan to get in.

Q. You studied briefly at VCU in the 1990s and are calling this ‘College, Round Two.” What has your experience been like?

A. I call this “College, Round Two” because it is really a second opportunity for me. When I moved to Charlottesville, I enrolled in Piedmont Virginia Community College. Coming out of that environment, where I was accustomed to all ‘A’s’ for two years of transfer credits, adjusting to the level of instruction here was a bit intimidating. But I was really ready to go and just kind of took off. It’s been a whirlwind ever since.

Q. Most students in the School of Continuing and Professional Studies earn their degrees in four to seven years as part-time students. You are graduating after spending 2½ years in the program. How did you do that?

A. I’m kind of an anomaly. My wife and I decided that after our son Connor was born, I would study full time and be a stay-at-home dad. And I have always been one who thrives on accomplishment. I attribute that to working so long in a business environment and being held to certain standards. I’m very structured and very organized, so I have a set of goals that I feel I need to reach. With school in particular, I really wanted to walk out of here with a 4.0, and I’m going to end up walking out with a 3.99, which I'm perfectly happy with. The point is that for my learning style, I’ve found that setting goals is one of the most useful tactics to succeed. For “College, Round Two,” I also wanted to prove to myself and others that I could achieve these goals.

Q. What did you study?

A. As a humanities major in the BIS program, I have decided to focus on an area that is very personal to me, and it is art. I am blessed to have a father who, ironically, is a retired C.P.A., but also a phenomenal painter. My grandmother was a painter and my sister was a painter. I dabble in a variety of different mediums and love art history. My capstone project is based on how 18th-century colonial Americans used visual media to promote nationalism. So I’ve spent a lot of the last year of my life looking at ephemeral media from the late 18th century. Probably some of the biggest and best-known examples is Benjamin Franklin’s “Join or Die” wood cut. For the future, I am really looking at historical site management, a non-profit with some sort of history tie, or potentially even collection and exhibition curation and graduate school.

Q. School of Continuing and Professional Studies Dean Billy K. Cannaday has described you as a person of great curiousity who seems “driven” to be a great husband and dad to Connor, who was born without thumbs and had breakthrough hand surgery at U.Va. How do you plan to celebrate graduation with your family?

A. My parents and aunt are coming and my wife is going to bring my son. We’re going to see how that plays out.

It’s one thing to have your parents see you graduate. It’s another thing to have your child see you graduate. I mean, he’s 3; he’s not going to remember it, but there will be plenty of pictures. Really, he’s been the guiding motivator behind this. Everything that I’ve done, absolutely everything is for him. Some people go to college because their parents want them to. Some people go because they want a better job. I want to better myself to be an example to my son in real time and hopefully inspire him later to do something similar.