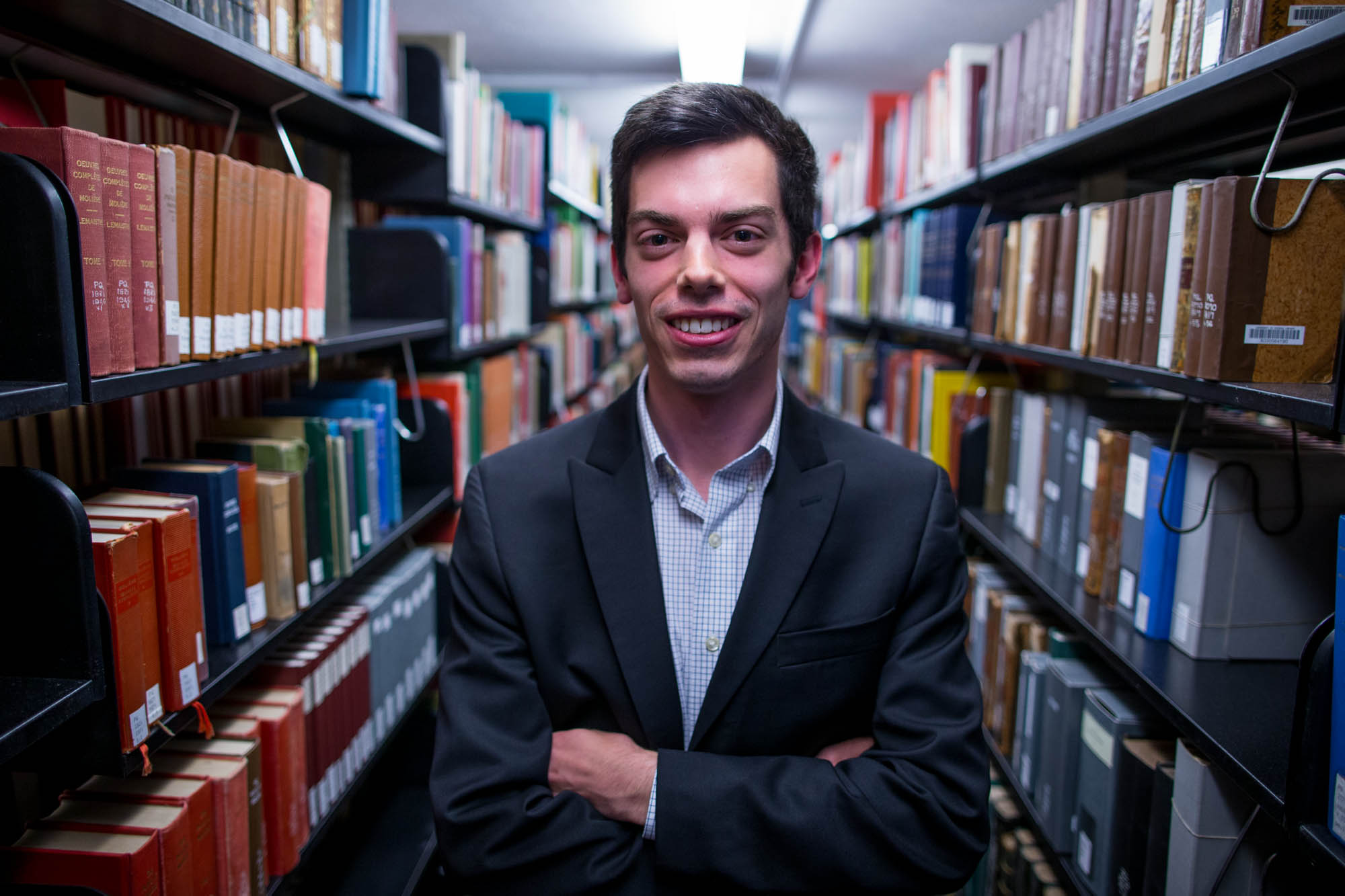 After graduation, fourth-year University of Virginia student James Duke will return to Lucknow, India, to study a language in which he has reached near fluency and to reunite with the same family and professors he lived and worked with after his first year, when he won a Critical Language Scholarship from the U.S. Department of State to study the Urdu language.

Duke, a South Asian studies major and Echols Scholar at the University of Virginia, originally planned to study math. After exploring options – studying abroad in Singapore; interning in the archives of the Asian American Collection of the Library of Congress; taking women, gender and sexuality elective courses while pursuing a path in the McIntire School of Commerce during his third year; and teaching English to migrant workers in Charlottesville – Duke knew he didn’t want to study numbers, but a culture.

Now he is a recipient of the Middle Eastern and South Asian Languages and Cultures Department’s MasterCard Asian Studies Scholarship and a recipient of the 21 Society Award. Also a two-time winner of the Critical Language Scholarship, Duke is poised to pursue a career in academia or the foreign service – or both – after graduation.

After switching to South Asian studies as his sole major during his fourth year, Duke dove into a distinguished major thesis that focuses on the work of two gay South Asian American writers of Ghazal poetry, a popular classical form in South Asia and the Middle East. The densely metaphorical poetry is comprised of a string of couplets separated and often structurally unrelated to each other, connected by rhyme, meter and a theme, with a repeated word or phrase at the close of each stanza.

“I rank James among the top 1 percent of students I have had in my teaching career,” said Mehr Farooqi, associate professor of Middle Eastern and South Asian Languages and Cultures. “Learning a foreign language is a challenge that many bright students undertake with flair and passion. James has both in good measure. In the space of four years he has mastered Urdu at a very advanced level, achieving beyond the typical trajectory of language learning.”

The works of Agha Shahid Ali and Iftikhar Nasim, Duke argues, use the unique structure of the ghazal form to translate their distinctive identities as members of the South Asian diaspora and the gay community from Urdu to English. Both poets were immigrants: Nasim, a refugee from Pakistan who was persecuted for his sexuality, and Ali, an immigrant from India who taught at multiple American universities.

Both poets negotiate themes the “loss of self,” and regaining that self, by discussing the idea of translation – across languages, and across multiple experiences. They rarely distinguish their sexualities from the other variables that make up their identities, Duke said, but they do discuss the feelings of alienation that have stemmed from them.

In his poem “Snow on the Desert,” Ali, for example, integrates scenes of loss from both Arizona and New Delhi. While he can’t quite express the meaning of them both, he uses one to refer to the other, and gets at the notion that the best way to describe experience is through other experiences, “a thing which can only refer to itself.”

“The poetry talks about two moments that are untranslatable, but put together, they help make each more legible, more understandable,” Duke said.

“Language is the most important thing that forms our ideas, as people and as a culture. These poets are bringing the essence of Urdu into English, and our responsibility in assessing someone else’s point of view, through literature, is important to forming a better understanding of them and where they’re coming from.”

Their need to “translate the self” changes with age, Duke said. “The need to hold yourself in language is particular to being alive, and as [Ali] was dying, he abandoned that formal structure for a more direct one.”

He also traveled to Hamilton College in New York to research several of Ali’s unpublished ghazals, which were constructed from direct quotes of American poet James Merrill’s works. His exploration of these unpublished works will be considered for publication down the road, Duke said.

Closer to home, Duke’s service as an English tutor through the English Speakers of Other Language and Latino & Migrant Aid programs at Madison House has played into his work in poetry, and it has helped him develop an empathy for migrants in the U.S. that he’ll take with him after his time at U.Va. comes to a close.

“Seeing how migrant populations have affected American culture, and continue to affect American culture is important to recognize, because they’re typically a group whose story doesn’t always get told,” he said.

Duke hasn’t yet nailed down his next steps after the summer, but he likely will choose between work in AmeriCorps through City Year New York, the Peace Corps, or the South Asian Studies M.A. program at Heidelberg Universität in Germany. Duke says he will either remain in academia as a researcher and professor, or use his Urdu skills in the Foreign Service.

For now, Duke looks forward to returning to India and immersing himself in a culture and way of life he has grown to love.

“It’ll be fantastic to see my host family and professors again,” he said. “And this time, after all this research in Urdu, I’ll be much better at speaking with them.”

Here Is What You Need to Know About the New Coronavirus Variant, Omicron END_OF_DOCUMENT_TOKEN_TO_BE_REPLACED

Fall Is in the Air on Grounds END_OF_DOCUMENT_TOKEN_TO_BE_REPLACED

Meet the Cats and Dogs Your CVC Donation Supports END_OF_DOCUMENT_TOKEN_TO_BE_REPLACED