Class of 2015: One Darden Grad’s Journey From Iraq to Investment Banking 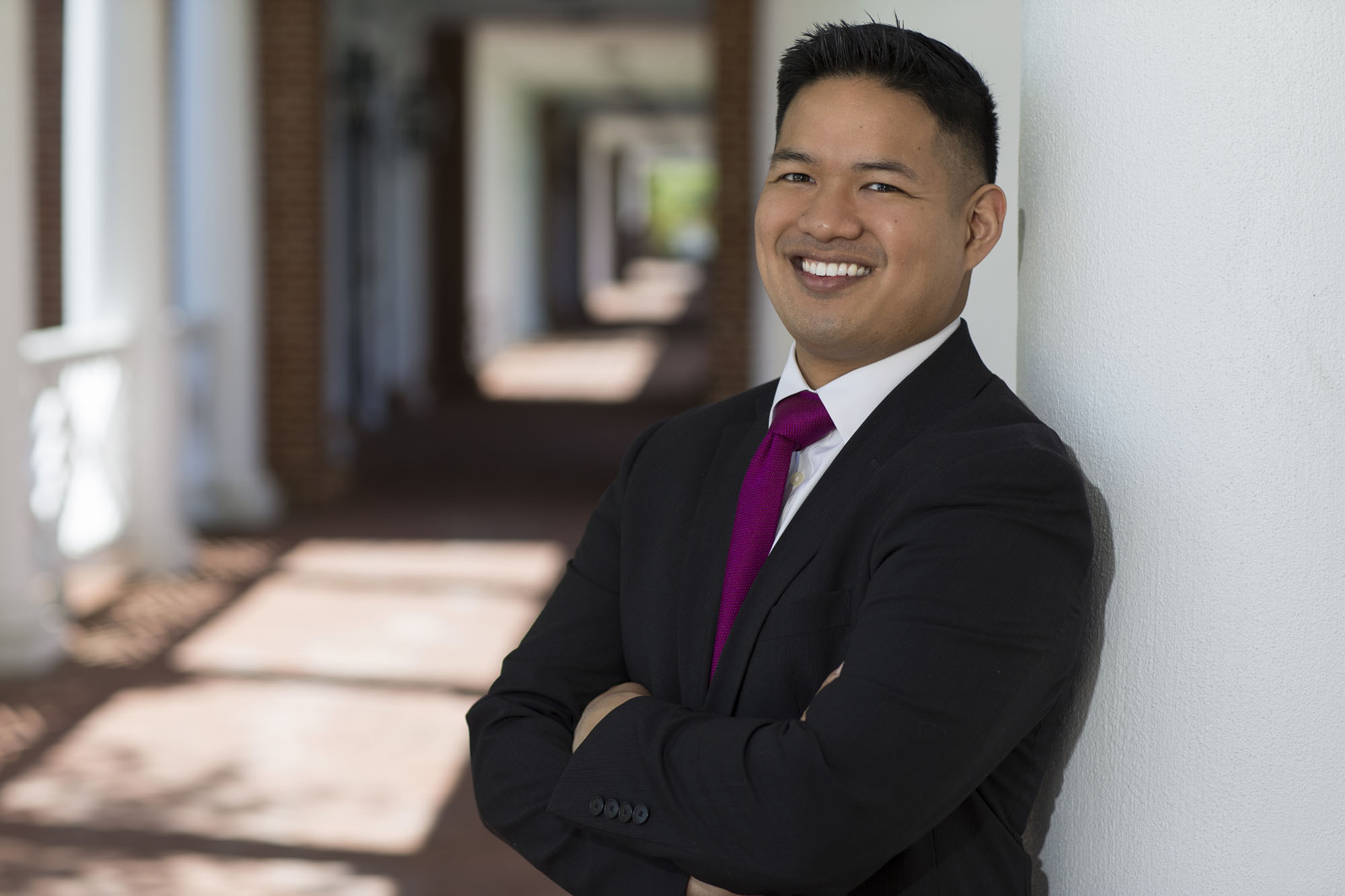 MBA candidate Derek Rey will use his U.Va. degree to move from a military career to a career investment banking, moving to Atlanta, GA with his wife and daughter.

The Sept. 11, 2001 attacks may have happened on the opposite coast, but they triggered an immediate transformation for San Francisco Bay-area native Derek Rey. A high school senior at the time, Rey had been weighing several career tracks before the Twin Towers fell. After, he knew he wanted to join the military.

Rey earned an ROTC scholarship to the University of Southern California, embarking on a journey that would lead him around the world and, eventually, to the University of Virginia’s storied Lawn, where he will earn his M.B.A. degree from the Darden School of Business on May 17.

Rey served seven years as an infantry officer in the U.S. Marine Corps, completing two tours of duty in Iraq, as well as deployments to Guantanamo Bay and the South Pacific. In 2013, Rey decided to leave the military to spend more time with his wife Elizabeth and their newborn daughter Aria, and to pursue a new adventure in business education.

UVA Today caught up with Rey as he prepared for his final exams.

Q. How was the transition from the military to business school?

A. The military was a very rewarding career. I had some great opportunities to lead, to manage operations and to practice a lot of the soft skills that you need in business. I got to see a lot of great places and meet a lot of different people. But at the end of the day, I knew that I had a family coming and I wanted to do something a little bit different with my life. I wanted to take the skills that I learned in the military – being able to work well with people, leadership, communication – and apply that to a sound foundation in business.

Not coming from an academic business background or a practical business background, business school presented a steeper learning curve to climb. Coming from the military, I knew that I could work hard and put in the hours to get stuff done. I decided that I was going to treat it like any other mission, where you have to do a lot of legwork beforehand. I took some courses the spring before coming to Darden, and once I got here, though it was a steep curve, I felt like I was able to take as big a part in the classroom as anyone else, especially given my management and leadership background. I’ve led teams of 40 to 100 people, often in high-pressure situations, and I was able to bring that perspective to the classroom.

The experiential learning and case method that Darden specializes in was really important to me. I felt like it was a more engaging form of learning for me, not coming from a traditional industry. It’s crazy to me how much I have learned in 21 months of education here.

Q. How have you balanced the demands of a top MBA program with family life?

A. Charlottesville is a great place to raise a family, and Darden is a really tight-knit community that is very supportive of students with a family and military students. One of the things that I will take away from Darden is the community, making these friends and these connections that I feel will last a lifetime. I have made really good friends with a lot of the other parents here, many of whom were from the military, too. Many had kids the same age as my daughter, so we would get together for play dates or birthday parties.

Throughout my first and second years, it was a balancing act, making sure that I was balancing academics, professional networking and recruiting, and being a husband and father. Then there is the social part, getting to know your classmates. When you’ve got all of these balls up in the air, it’s a juggling act.

I made sure that family was always going to be my first priority. Obviously, the academics were something that I wanted to learn, but I am always going to be a husband and a father first. It’s been a heck of a ride, but at the end of it all, I think that I was able to develop that strong business foundation that I really wanted, transition from the military into a business career, and spend some real quality time with my wife and daughter that I definitely would not have gotten had I been in the military still, doing overseas deployments.

Q. What have been some of your favorite projects at Darden, in or outside of class?

A. One of my favorite things that I did here at Darden was Darden Capital Management, a student organization that manages real money on behalf of the Darden School Foundation Board of Trustees. We were given money to invest and split up over different funds and I was a portfolio manager for one of those funds. Coming from the military, I didn’t really have any experience with the financial or asset management sectors, so it was awesome to learn a lot about stocks and how to think about investing in companies. In my second year, I was able to be a portfolio manager and manage real money in real time. For me, that was a big deal. It was hands-on learning that I would not have been able to have through books or cases.

I also really enjoyed being a part of the Student Admissions Committee during my two years here. It was very rewarding to help Darden’s admissions office put on events for applicants and admitted students. I got the opportunity to be an interviewer, and being able to meet and hear the stories of so many applicants with such different background was a humbling experience.

I had also done some singing in high school and college, but didn’t get to do much of that in the Marine Corps. So, when I came to Darden, I wanted to see if I could get back into singing and joined the Cold Call Chorus, our a cappella group. I had a great time my first year and moved into the director role my second year.

Q. What’s next? What are you excited about after graduation?

A. I interned with Barclays in New York this summer and will be returning full-time in an investment banking role in their Atlanta office. My wife grew up around Atlanta, and we thought it might be a bit easier to raise a family there. I am used to moving around every two or three years, and for me, it is always an adventure. I am excited to start that adventure in Atlanta with a family.

One thing I have learned during my Darden experience is that this transition at graduation is not the end, but the beginning. That’s a cool feeling, to know you are starting something new.

A. My wife and I are huge fans of Bodo’s Bagels on the Corner, so we try to stop by whenever we are around there.

For one of my classes, we did a puzzle hunt around Grounds. It was really cool and took us throughout different parts of the University, places I had never been. I really got a feel for Grounds, the Rotunda and everything going on around there.

I also had a class, the Thomas Jefferson Reading Seminar, in the Colonnade Club in Pavilion VII. We learned about management lessons to be gleaned from Thomas Jefferson and his compatriots. I thought that was a really cool class and a really cool way to learn about that, being in the oldest building on the Lawn.

A. One of our favorite places to get coffee is Cville Coffee. You can get a little bit of everything – great coffee and food, a place to sit and work and a kids’ play area, which works out for us really well. We can do our work and our daughter can climb around and play on the giant turtle.

Q. Looking back now, what would you tell those just entering their first year at Darden?

A. It goes by so fast. If you think your undergrad years went by fast in four years, 21 months goes by in a flash. Enjoy every moment. Think about what you want to get out of Darden and just go out there and do it. Soak in all of the academics that you want, all of the extracurriculars that you want. Don’t walk out of these doors thinking that you have missed out on something.