Class of 2015: Unlikely ’Hoo is Graduating, but Has No Plans to Leave U.Va. Family 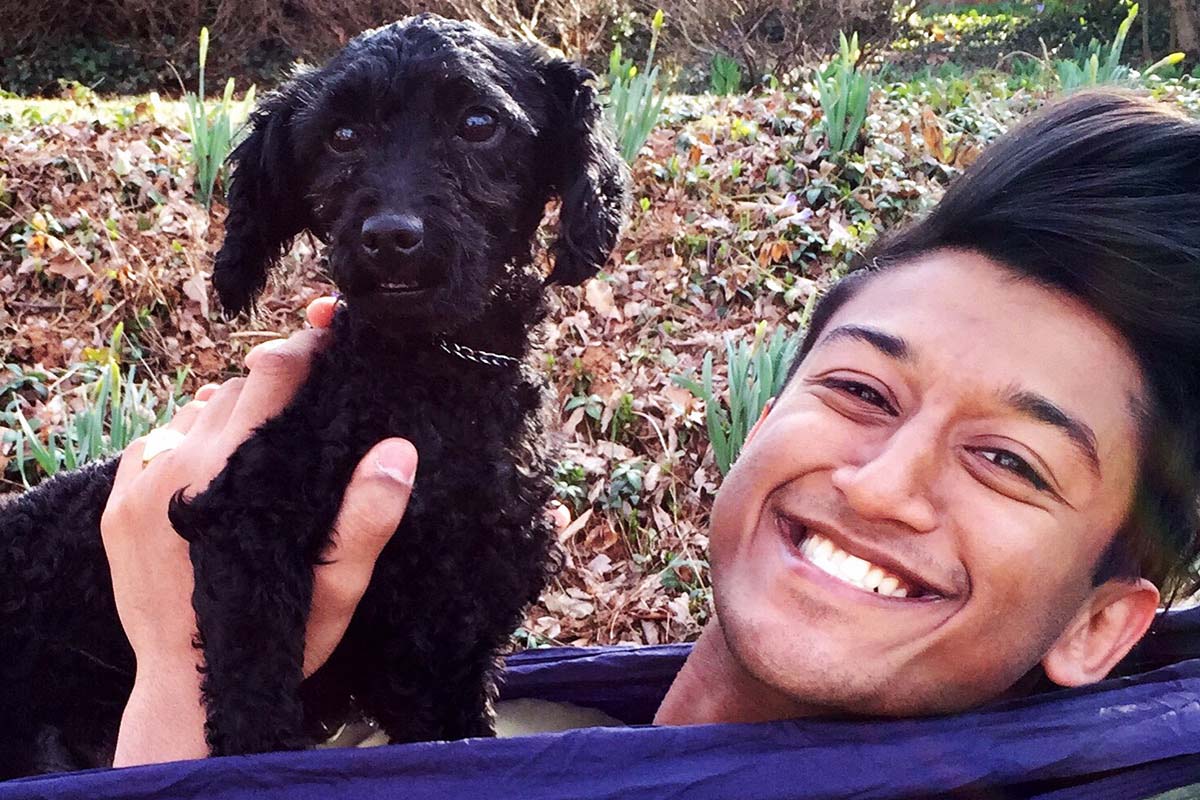 Khan &amp;ndash; in a rare moment of repose &amp;ndash; &amp;ldquo;hammocking&amp;rdquo; in the garden behind Pavilion VIII earlier this spring with his roommate&amp;rsquo;s toy poodle, Onyx.&amp;nbsp;

“This University means everything to me and my love for this school and its people knows no bounds.”

Fourth-year University of Virginia student Rafat Khan wrote these words in a thank-you letter to the family of Shawn Michael Bryant, who established a memorial scholarship fund in their late son’s name for meritorious fourth-year commerce students dedicated to the University and public service. It is one of the many awards Khan has received during his four years at U.Va., but, he says, is the one that means the most because it is given to students who absolutely love U.Va.

Khan – who lives, sleeps and breathes all things U.Va. – was a natural choice.

His journey to Charlottesville started in the mid-1990s in Dhaka, the capital of Bangladesh, where kindergarten-aged students began their years-long preparation to take the advanced-level exit exam, or “A-levels,” the test administered under the British curriculum system to high school seniors.

Schools in Bangladesh issue class rankings of students beginning in kindergarten, and that first year, Khan placed 10th in a class of about 30 students. His mother knew her son could do better, so she began tutoring him in his bedroom of their Dhaka apartment on the nights before big tests.

“She is the reason that in school I fought to get to the top three,” he recalled during a conversation as he sat near the Alexander Galt statute of Thomas Jefferson in the South Gallery of the Mary and David Harrison Institute for American History, Literature, and Culture. “She would sit me down and tutor me personally when I was in the first and second grade, when grades and rankings started to become a thing.”

Khan stayed in the top three of his class for the remainder of his education in Dhaka.

So it’s no surprise that when he went looking for a university, rankings played a role. He knew he didn’t want to study commerce in Bangladesh and despite having never been outside of Asia, narrowed his search to the United States’ mainly Ivy League institutions. U.Va. was in his second tier, but only because of its highly ranked McIntire School of Commerce.

When he failed to get into any of the Ivies, Khan decided, sight-unseen, to come to U.Va., eighth on his college wish list.

To hear him describe it, that fateful decision sealed his destiny.

“I came here and fell in love and I can’t even imagine being anywhere else,” he said. “I thank God to this day that I did not get into one of the Ivies, because I would have missed out on everything this place has given me.”

Khan, an Echols Scholar majoring in commerce and minoring in philosophy, dreamed of an idyllic college experience, filled with school spirit, football games and making friends for a lifetime. He says that is exactly what he got. He threw himself into activities  – running for office, applying to several programs and even trying out to be the opening speaker for Valedictory Exercises.

Khan will tell you he has had more failures than successes. He did not win when he ran for class president his first and second years, nor was he selected to speak at Valediction or to be a University Guide. But that didn’t keep him from continuing to strive. A tattered fortune cookie message he carries in his wallet explains his philosophy. It reads “Our greatest glory is not in never falling – but in rising every time we fall.”

And rise he has over the course of his four years at U.Va. In addition to the Bryant memorial scholarship, Khan was the 2014 recipient of the Lorna Sundberg International Center Student Scholarship, and is this year’s International Studies Office student of the year. Khan created an international career network as part of the Global Student Council and was on the entrepreneurship and innovations committee of Student Council. He served on the Global on Grounds Committee, a University-wide group charged with engraining a global culture at the University. He is also on the giving committee of the Class of 2015 Trustees, the governing body charged with organizing alumni events and connecting members of the class after graduation.

Khan said he adored his time as an Orientation Leader in 2012, but his role as a director of activities for the UVaClubs Student Ambassador program holds a special place in his heart.

In that program, current students are tasked with connecting with alumni, parents and friends. Ambassadors are selected for their enthusiasm for U.Va., their knowledge of the school and their interpersonal skills.

“I share my story with the students; I tell them I was once in their shoes and that in the four years I have been here I have only been home once,” he said, admitting that parents are not too excited to hear that bit of information. “I am often asked if I miss home or feel culture shock and I tell them the answer is ‘no.’ As cheesy as it sounds, this place has become my home and the people here have become my family.”

In addition to Khan’s ever-present grin, he stands out on Grounds because of his jet-black “fauxhawk,” a hairstyle long on top and combed high to resemble a mohawk. He laughed when asked about it. “Because I’ve had it since I was in high school, I don’t really think of it as making a statement,” he smiled. “I think it is more of a statement in America than it is in Bangladesh, because a lot of young people in Bangladesh have fauxhawks.”

So will he keep it when he starts his job at Morgan Stanley in June? “That’s the million-dollar question!” he said.

Khan landed a two-year position as an analyst in the fixed income division at the firm after completing an internship there last summer.

“I got the internship because U.Va. alumni, now working at Morgan Stanley, came to McIntire to recruit,” he said. “I could not have gotten the job without McIntire.”

Despite his impending move to New York, Khan is determined to stay firmly engaged with U.Va. in his role as a Class of 2015 trustee. His long-term goal is to find his way back to Charlottesville.

Mentor and UVaClubs Director Elizabeth Muse put it this way: “He wants to give back from the moment he leaves Grounds. What he will be trying to accomplish is getting back to the University of Virginia to impact this community, and that is the leader he became at U.Va. That is not the young man who first came here, but that is who is leaving this University.”