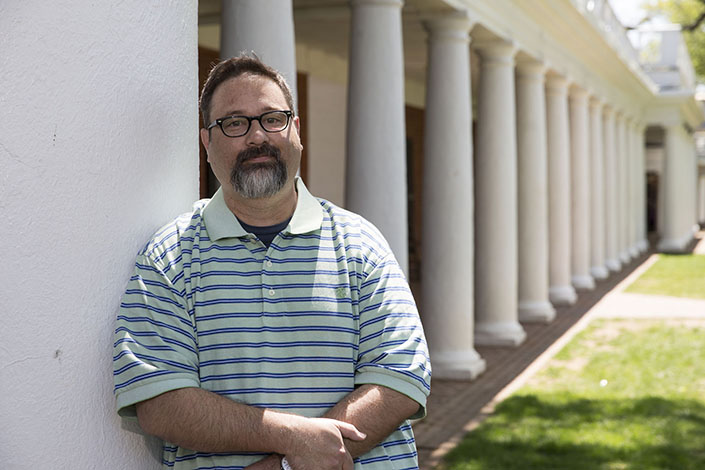 Enthralled with history, former TV comedy writer Robert Dewberry is now aiming for a new career as a professor.

He may not be the most typical student you’ll find in a Civil War seminar, but Robert Dewberry, now a fourth-year student at the University of Virginia, may well be the most excited to be there.

At 43, he’ll graduate May 16 with a bachelor’s degree in history. After walking the Lawn, the former TV producer and newlywed plans to take a year of working, volunteering and spending time with his wife before pursuing graduate school to work toward his new career ambition: to become a historian and professor, inspired by his own professors at U.Va.

Dewberry, a Long Beach, California native, was never certain that he would achieve a college degree, much less earn it on the East Coast.

After dropping out of high school and leaving home at 16, he networked through odd jobs that eventually landed him in the entertainment industry in Los Angeles, where he starred in about three dozen commercials. (“I have this fear that an instructor in class is going to pull up one of my old commercials,” he joked). Dewberry went on to find work as a writer’s assistant for a handful of late-night comedy shows; he stayed in writing and producing in television for the next 20 years, bouncing from gig to gig in spots for “The Jeff Dunham Show,” “Talkshow with Spike Feresten” and multiple Comedy Central roasts.

He even dabbled in writing for reality television. “They don’t like to admit that they have writers, but they definitely have writers,” he said.

Still, Dewberry wished he could’ve continued his education. Though he’d earned his GED, he felt the gap between himself and the other college-educated writers around him.

“[Good writing] is about making connections,” Dewberry said, “and the more educated you are, the more opportunities you have to make those connections. … Luckily, I was a huge reader, and I found ways to hold my own around [the writers]. But I could often tell that there was something there that they had, but I didn’t.”

His last gig was working on a pilot for his comedy idol, Dana Carvey, but the show didn’t take off – and Dewberry had been getting the feeling that he was ready for a change of pace.

In a quest for a valuable history program, a chance visit to Charlottesville got Dewberry thinking about moving east. On a family vacation to Washington, D.C. with his then-fiancée, her aunt, a former bioethics instructor at U.Va., suggested the couple check out the University of Virginia.

“It was beautiful. I had never been to the East Coast – or the South really – before, and it was just really, really different than L.A.” he said.

That breath of fresh air stayed with him when he returned home. An avid history buff, he researched the U.Va. history department and discovered the “Backstory With the American History Guys” public radio program, sponsored by the Virginia Foundation for the Humanities and hosted by three current and former U.Va. professors who give insight into a cornucopia of interesting topics in American history.

“It kind of clicked with me,” Dewberry said. “I hadn’t realized that was the level of history professors at U.Va., and they absolutely blew me away.”

His fiancée had just transitioned to a telecommuter job, which meant that he was in a position to go back to school and get his education anywhere – and he set his sights on U.Va.

Getting back into education wasn’t simple – try re-learning algebra for the SATs after going without school for 20 years – but Dewberry was determined to dive in. He and his fiancée packed up and crossed the country to live in Charlottesville, where he enrolled in Piedmont Virginia Community College in 2011. In the fall of 2013, he finally transferred into U.Va. as a third-year student through the PVCC-U.Va. guaranteed admission program.

Going to school among 20-year-olds has been energizing and stimulating, but isolating at times, he said, but he takes the unconventionality of his age with good humor.

“On the first days of class when I sit down, I get a lot of looks like, ‘Why is the professor sitting in the class like everybody else?’ like it’s going to be some weird ‘Dead Poet’s Society’ thing,” he joked.

Set on savoring every moment he has at U.Va., he’s kept a jam-packed schedule during the past four years, attending summer courses, January term classes, flash seminars and special lectures between PVCC and the University.

“I still feel like I haven’t taken advantage of everything – it goes by so fast,” he said.

Most crucial for him has been the opportunity to kindle his love of history, especially surrounding the Civil War era. He attributes much of that passion to Gary Gallagher, John L. Nau III Professor in the History of the American Civil War, with whom Dewberry has taken multiple courses.

“He reads things with a different eye than the 19-, 20- and 21-year-old students do,” Gallagher said. “Of course, part of that is because he’s lived twice as long as most of the class! He’s clearly really enjoying being back in school, has really immersed himself and brings a lot to the table.”

Dewberry echoed Gallagher’s idea that it’s hard to understand America without understanding the Civil War, because everything before the Civil War was leading up to it, and “everything after it, came out of it,” he said.

As he prepares to pursue a new career as a historian, he offered encouragement to adults who may be thinking of continuing their education. “Pursue what you actually want, not what everybody thinks you should do or what even you think might be easier,” he said. “Because rewards here have been far greater than the challenges. Feeling out of place has been a small part of the experience; most of it has been being wowed that I’ve gotten to have it.”

History professor George Gilliam, who was an attorney for 25 years before he went back to graduate school to pursue a history Ph.D., immediately felt a sense of kinship when Dewberry enrolled in his “History of Virginia” and “Viewing the South” classes.

“I’ve had coffee with him, found he was very bright – and of course, more mature than any of the kids he was in class with – and I found that he was an extremely disciplined and willing learner who works very hard. I had a great time with him and was very impressed with him as a student.”

For now, Dewberry is plunging through final exams and finding every opportunity he can to relish the moments he has left as an undergraduate.

“Last week I walked out of a class and it was late. It was dark, and walking across the Lawn, I thought, ‘There’s something about the school at night,’” he said. “It’s just so beautiful, and you just can’t believe you’re here. It’s not like you’re just a tourist, but it’s part of you, and you’re a part of this thing, and there’s this connection to not only this school but to Jefferson. You feel so privileged to be a part of it, even if it’s a tiny part of it for a short time.”