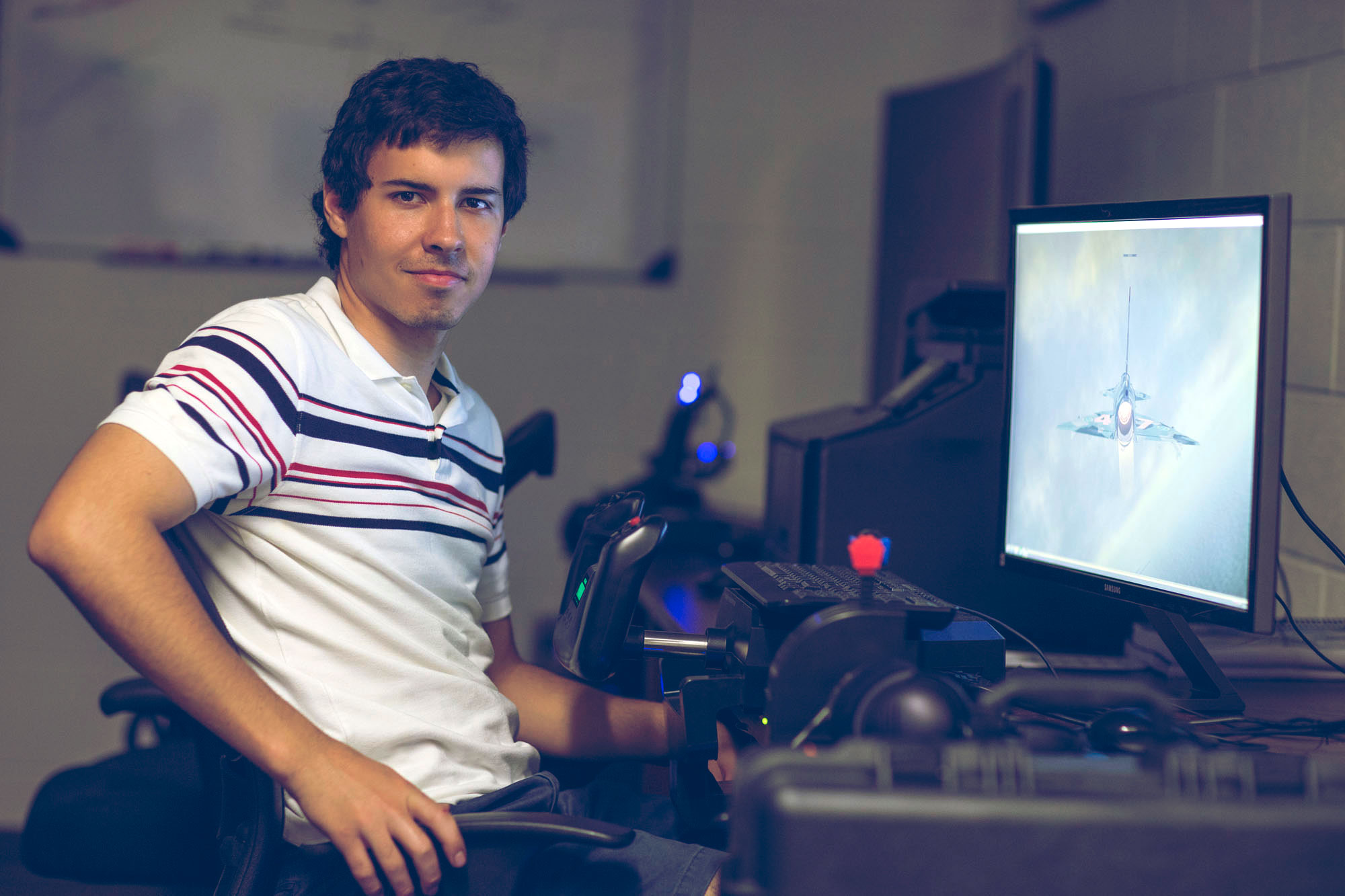 When University of Virginia aerospace engineering student Adam Wulchin learned that his department acquired a flight simulator as a teaching tool, he took to it like a bird takes to wing.

He had grown up with a natural love for airplanes and the desire to fly. He even began earning a private pilot’s license the summer before his fourth year at UVA and expects to complete it this summer. The flight simulator allowed him to further his training as he has pursued his degree.

The $150,000 flight simulator, acquired by aerospace engineering professor James McDaniel, simulates flight so realistically that it can be used as a ground-based flight trainer for future pilots like Wulchin and students in UVA’s Air Force and Navy ROTC programs. But its primary purpose is to enhance the learning experience of students in McDaniel’s “Flight Vehicle Dynamics” course – the theory of aircraft flight – that is required of all aerospace engineering majors.

On any given day, students can be found in the lab “flying” the simulator, and during formal lab sessions on Tuesdays this semester, their instructor was Wulchin, who graduates this month.

UVA Today science writer Fariss Samarrai asked him about his experience at UVA.

Q. Have these four years “flown” by? What did you gain by coming here, beyond a degree?

A. Yes, these years have certainly “flown” by, faster than I would have liked. I have tried not to take this experience for granted. I have gained a great number of friends who have helped me along the way by giving me a greater appreciation for how fortunate I was to be able to come here. My four years here have shaped, and will continue to shape, who I am in the world outside of UVA.

A. With engineering we are not limiting ourselves to what is possible; we are only limited by what we think is possible. Engineering allows me to pursue that which is “impossible.”

I have always loved flying growing up and aerospace engineering has given me the opportunity to learn about flight theory and also apply concepts to hands-on situations. It seemed like the right fit for my interests coming in and I have been very happy in the aerospace field.

Q. What role did UVA as a broader institution play in your decision to pick its engineering school?

A. When making my decision, I felt that UVA would allow and encourage me to pursue multidisciplinary interests both in and outside of the Engineering School. I was able to take classes in the [McIntire] School [of Commerce], [the] College [of Arts & Sciences] and [the] Curry School [of Education] and apply the concepts of engineering to different situations.

I also grew up in a UVA family, so that definitely helped my decision.

Q. What do you do in your spare time when you’re not flying?

A. I am also involved in the Class of 2016 Trustees and ULink Peer Advising. I like to play soccer and basketball and I am a referee for the local soccer league.

Besides that, my design classes this year have kept me pretty busy, but they have certainly paid off in the end. I am part of a team that is designing an electric airplane as part of a NASA competition, as well as another team that is prototyping the propeller module of a jet engine.

Q. What is it about flight and aircraft design that attracts you?

A. I think that the range of possibilities for someone that enters the aerospace field is so extensive that it is impossible to get bored working in it. The idea that we can get a pressurized tube of metal weighing about half a million pounds into the air is absolutely incredible. I came to understand how that works and how I can contribute as a member of the aerospace community.

Q. How has the flight simulator enhanced your learning experience, both as a student and as an instructor in the lab?

A. As a student in the lab, the flight simulator allowed the class to take the concepts and theories that we had seen since first year and see the application in a realistic setting. We could experiment with different flight and weather conditions without the fear of crashing. I’m pretty sure a Cessna 172 can’t actually do a barrel roll, but we were able to try it.

As an instructor, I have continued to learn the theory so that I am able to explain different situations that occur in the simulator.

Q. What have you decided to do after you graduate?

A. I will be working as a manufacturing engineer with Lockheed Martin and from there I hope to pursue a career as a pilot with the United States Air Force. I would love to keep pursing my passion for engineering and flight and I think this is a great way to start that journey.