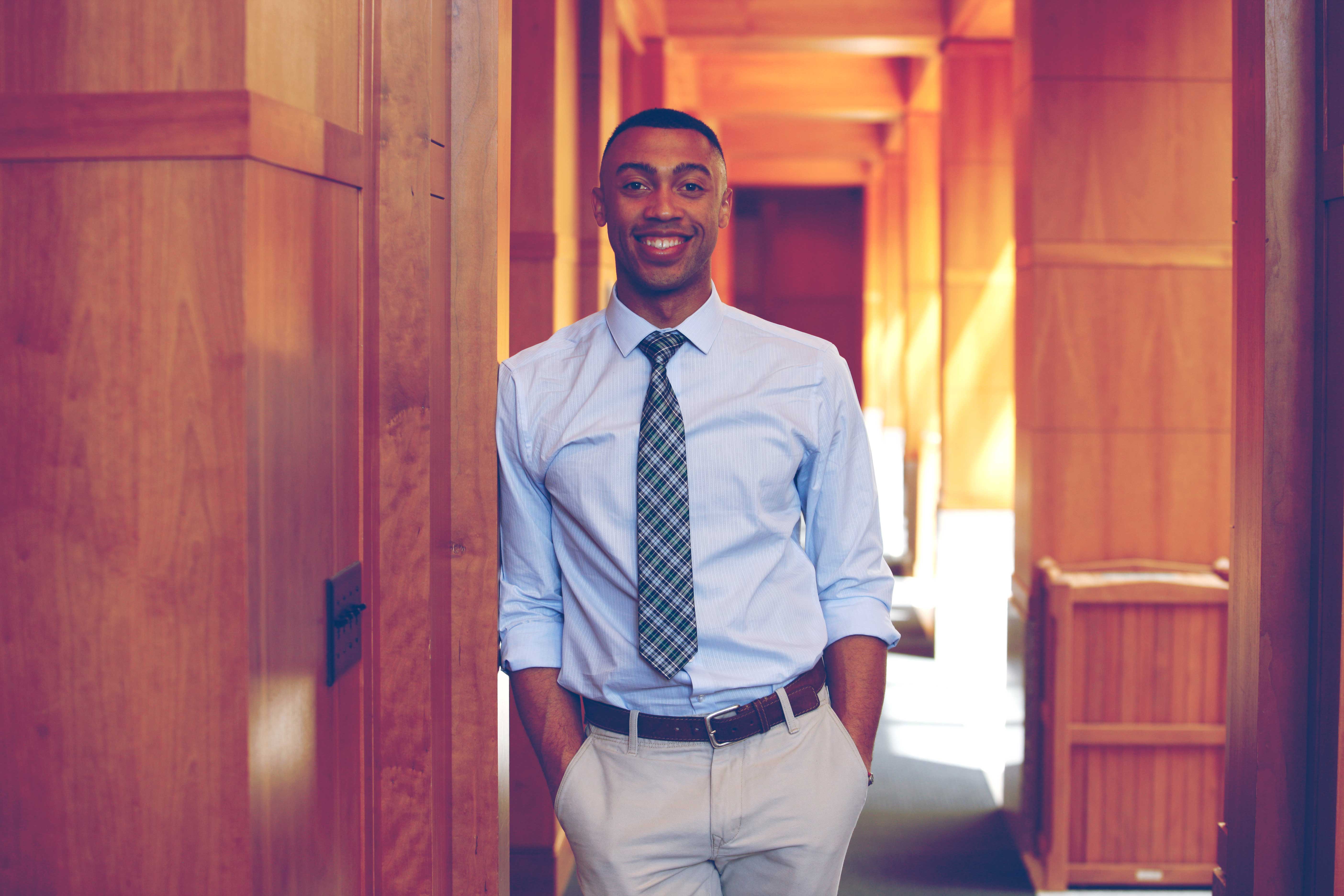 As an aspiring courtroom advocate, Zachary Ray’s formal education will culminate with his graduation from the University of Virginia School of Law later this month. But his path to becoming a lawyer began when, as an undergraduate, he attempted to save his college track team from being disbanded.

Ray was a nationally competitive hurdler and captain of the men’s track team during his senior year at the University of Maryland in 2011 when he heard that the school was downsizing the number of Division I athletic teams, including the track team. Since Ray had been forced to sit out most of his sophomore year and all of his junior year due to painful stress fractures in his leg, he still had one more year of athletic eligibility following his senior year, and he wanted to compete. But more than that, he was thinking about how his teammates would be affected by their sport being cut.

“We had athletes from Nigeria, Israel, Senegal,” Ray said. “Some had come to Maryland with very real Olympic dreams. Some of them weren’t citizens. There was a risk that, if they left the university and another school didn’t pick them up, they might be deported because they were on student visas. It was a very difficult time.”

Ray and his teammates decided to take matters into their own hands. They galvanized the Maryland track alumni network, raising, all told, nearly $1 million dollars to fund the team. The business majors on the team went through the school’s figures and found alternate ways to trim expenses.

Though Ray had started college with the idea of going to law school, his interest had waned as he switched from majoring in criminal justice to biology. That changed as he made his case to the school.

“I met with the president of the university and the athletic director, arguing before them that the team should stay,” he said. “Through that, I started to realize that being an advocate was something I was still passionate about.”

While the university deliberated about the fate of the team, Ray applied to law schools, as well as one-year master’s programs that would allow him to compete in track for one more year while continuing his studies. He was accepted into UVA Law while also being recruited to run for Boston University. In the meantime, while still at Maryland, he qualified to try out for the 2012 U.S. Olympic team. He decided to defer UVA for a year to see how far he could take his track career at Boston, where he also pursued a master’s in criminal justice.

Two weeks after he made that decision, Maryland reinstated the track team, thanks in large part to the team’s efforts.

At Boston, Ray excelled beyond his expectations. He earned second-team All-America honors and finished 14th in the NCAA championships despite a recurrence of his injuries, and received the Metropolitan College Excellence Award for his graduate work.

Though he considered continuing his track career, his ultimate sights were set on UVA Law.

Ray easily transferred his leadership skills to the Law School community, where he again became an advocate for his peers. He was a winner of the Mary Claiborne and Roy H. Ritter Prize, which recognizes student honor, character and integrity. He served as a peer adviser and admissions ambassador. Ray also served as president of the Black Law Students Association and programs editor for the Virginia Sports & Entertainment Law Journal. He said he is proud of his efforts in helping to recruit a diverse student body as BLSA president, and of the symposium he organized for his journal, which featured keynote speaker Donald Yee, the agent of New England Patriots quarterback Tom Brady, among others.

This year, Ray took part in the Law School’s Prosecution Clinic, where he put the lessons he learned in his trial advocacy preparation into practice on real cases in Culpeper.

“Whatever I do long-term, I want to get into the courtroom,” Ray said. “I really like oral advocacy. I learned that from my coursework, especially my trial [advocacy] class.”

Ray has two clerkships lined up after graduation. The first will take him to Detroit to clerk for U.S. District Judge Gershwin A. Drain. Then he’ll go to Richmond to clerk for Judge Roger L. Gregory of the U.S. Fourth Circuit Court of Appeals. In both cases, he said, he’s looking forward to working with judges with whom he will be able to have a strong mentor-mentee relationship.

After that, he hopes to return to Washington, D.C., where he was an associate for the Covington & Burling law firm in the summer of 2015.

Ray credits his family, who live in the Maryland and D.C. area, with the love, support and preparation he needed to be successful. His mother was the first in the family to earn a bachelor’s degree, and worked for many years as a computer programmer for the Commerce Department before retiring. His father is a carpenter by trade, and built the family house. Ray is the youngest of four siblings, and his large family also includes 14 aunts and uncles, seven nieces and nephews, and a goddaughter. He is the second person in his family to earn a graduate degree.

“I’m really proud to pick up where my parents left off,” Ray said. “A lot of things in your life have to go right for you to end up in graduate school and law school. A lot of things are out of your control, especially when no one in your family has experience in the field you’re going into. They did a good job of preparing me for things I wasn’t prepared for.”

Though Ray has long been an advocate for his peers, he has also been on the receiving end at UVA Law, especially during his challenging first year in law school.

“I would study my first year on the second floor of Slaughter Hall, in the jury rooms,” Ray said. “There’s a lady on the housekeeping staff, Miss Jean, and she is the nicest woman you will ever meet. Her job is to make sure the jury rooms are straight and orderly and clean, and I was there obstructing her getting her job done. But she always let me stay, and she was always a breath of fresh air and encouragement. When I see her, she gets the biggest hug. I don’t think she realizes it, but she really helped at a time when I needed it.”