Class of 2016: Leech Sees Service and Scholarship as One and the Same 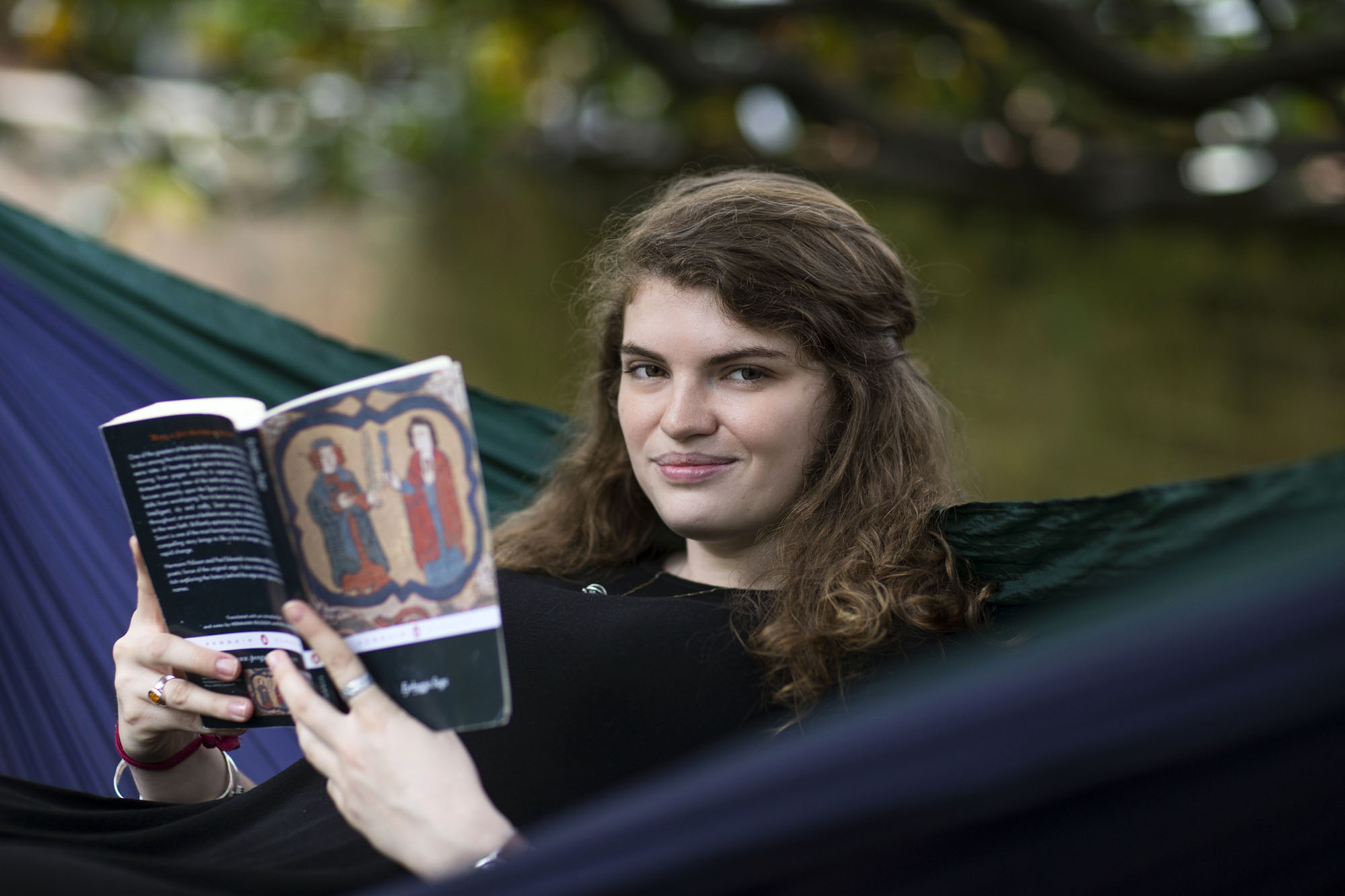 When Ellie Leech first arrived at the University of Virginia four years ago, she thought she might follow in her parents’ footsteps and study foreign affairs. A horde of well-spoken Vikings and one inspirational graduate student changed her mind.

Leech soon found her perfect fit as a double-major in religious and medieval studies. She sees fascinating parallels between Viking literature and the Judeo-Christian scriptures she studies.

In addition to her scholarly work, her years at UVA have been spent in service to others through her work with Madison House and the Churchill Activities and Tutoring program in Richmond.

UVA Today sat down with the Albemarle County native to find out how her fascination with Viking culture, her passion for service and her deep love of Cavalier sports have shaped her years at the University.

Q. What drew you to a double-major in religious and medieval studies?

A. When I first came to UVA, I took an “Intro to Christian Traditions” class and it just blew my mind the way that study of religion really encompasses history, literature and sociology. That lit a fire in my brain, and after taking New Testament and scriptural theology courses, I totally fell in love.

With medieval studies, I randomly took a course from [English Professor and President Emeritus] John Casteen on old Icelandic literature and decided the Vikings were amazing.

Q. What fascinates you about the Vikings?

A. I think in popular culture, they appear as these big burly men with axes that can hack you to bits, but really their culture and their politics were more refined than we think.

I think they demonstrate a political sophistication that’s on par with European governments for that same period, and their literature is complex. There are all sorts of ghost stories and religious elements that are similar to my research in Christian scripture. There are definitely parallels there.

Q. What’s your work with Madison House’s community partner, Abundant Life, been like?

A. For the past three years, I’ve been a Bible club leader for middle school girls and I’ve stayed with the same group of students throughout. Now I direct their high school program. We meet once a week and have a Bible study, and we’re starting to do tutoring and mentoring. We also really try to help students experience life outside their neighborhoods, so we do field trips, college trips and service projects.

It’s been a totally chaotic enterprise and it’s so fun. Growing up in Charlottesville – my parents live on a farm outside of town – I didn’t really experience the diversity of the city. There’s a large refugee population and there’s a blending of cultures. A bunch of my students are from Africa and I get to learn a lot about how they think about the world in a way that’s totally different from me. I’ve learned a lot about how to be patient and to recognize that I’m there to be an advocate for them and to serve them, but not to direct their lives in the way that I think is best for them. I’m just there to be their friend and help out wherever I can.

Q. Does community outreach factor into your future career plans?

A. I’m trying to do both academia and community development. I’m going to the Divinity School at the University of Chicago in the fall and I’m starting a master’s of divinity program that has an academic component and a practical component. I can’t imagine life without that community aspect.

Q. How has your experience at UVA helped put you on that path?

A. In the first religious studies class I ever took, I had a [teaching assistant], Kelly Figueroa-Ray, who changed my life. She encouraged me to sit down and think deeply about what religion means to all sorts of people of faith, whether that was Christian or Buddhist or what have you. She also showed me that your faith only really means as much as you make of it and if you aren’t doing anything with what you’re learning, then you have to ask what you’ll have to say for yourself at the end of the day or at the end of your life.

I think that here at UVA, we have a unique culture of pursuing things intellectually and pursuing things in the realm of service. I’ve seen that through my professors, my TAs, and also through various groups on Grounds.

Q. You’ve also devoted a substantial amount of your time at UVA to cheering on the Cavaliers. Do you have a favorite sport?

A. I’m a fan of the ’Hoos in general, but I’ve never missed a men’s basketball home game, probably in my entire life. I have four younger siblings and my whole family just loves basketball. We traveled to see them at Madison Square Garden last year and we love Tony Bennett. You might also recognize my younger sister Cammy as a fan. She’s the nursing student who was on that dance cam contest video that went viral last year. My mother and I were sitting beside her and my mom was mortified at the time, but it’s more proof that we all love the ’Hoos very much.

Q. What kind of legacy would you like to leave behind at UVA?

A. I’ve tried very hard while I’ve been here to live a life that hasn’t been dictated by grades or by doing something just for the sake of doing it, so I think that I’d want my younger sister, my family and my friends to know that UVA is more than just the Rotunda and the classes. We are a place within the larger Charlottesville community and with that comes opportunities to learn from the people surrounding us and to serve them.