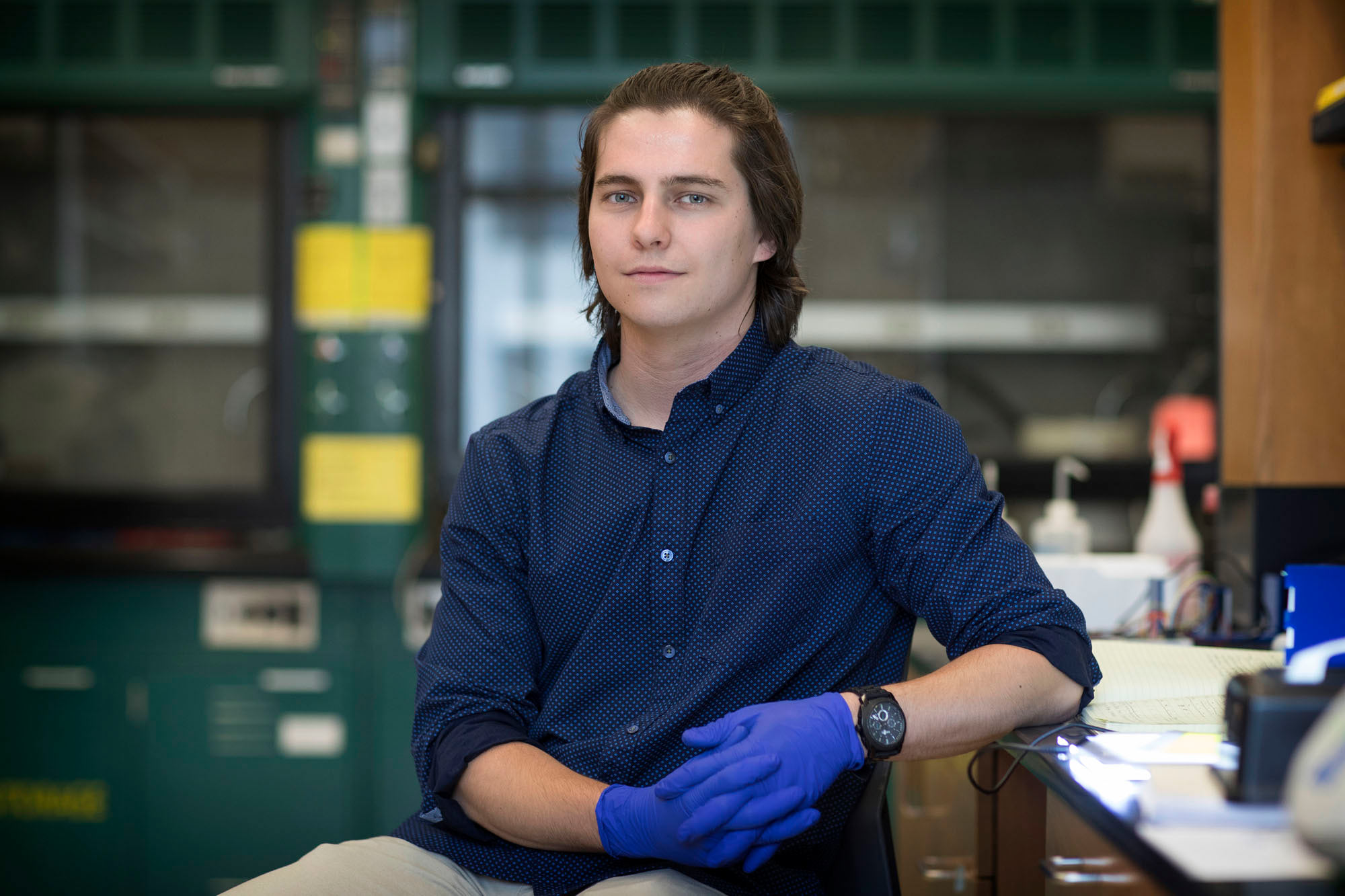 David Dent, who graduates in May with a chemistry degree, plans to pursue a career in pharmacy. (Photo by Dan Addison, University Communications)

When he arrived in Charlottesville, there was snow on the ground – the first he had seen. He admits that, at the time, he barely knew where Virginia was. But he got a good vibe on Grounds, even if everything was so different from where he came from, and realized immediately that he was excited to come to UVA.

Some might say Dent was disadvantaged as a triplet raised by a single mother on a low income. But that’s not what Dent would say. He has taken advantage of every good opportunity that has come his way, and every opportunity he has made for himself.

One opportunity that he grabbed hold of was the QuestBridge scholarship that brought him to the University without having to worry about finances. Dent is turning that into a bachelor’s degree in chemistry, and he will walk the Lawn to receive it in May.

“I had not ever even heard of QuestBridge until my sister Sara happened to bring home a brochure about the program one day,” Dent said. “It sounded too good to be true – that recipients would receive full four-year scholarships covering all expenses – but I applied anyway. It changed my life.”

While in high school, Dent worked part-time as a bagger at a supermarket. His mother had lost a well-paying job and was struggling to make ends meet; Dent began giving his paycheck to his mom to keep the family going.

“She was working odd jobs to pay the bills and keep food on the table,” Dent said. “She never said I should help out. She didn’t want me to have to help. But I said, ‘No, Mom, you’ve done so much for us. It’s the least I can do.’ I was happy to do my part. She had always put her four kids first, and I wanted to do the same for her.”

The family got through, little by little, a process of hanging tough for long enough.

“I worked hard for this, and I want others to know there are opportunities for hard-working people who don’t have socioeconomic advantages. It’s not a handout; it’s an opportunity. I’ve had an awesome experience.” – David Dent, May degree candidate

Dent’s mother made sure her kids stayed in school, despite the hardships, and she emphasized that they must study hard to better their lives. Dent took it to heart. He had always liked science, and he did well in all of his classes. With good grades and great financial need, he earned his scholarship.

UVA is one of several institutions that partner in the QuestBridge program, which connects the nation’s brightest students from low-income backgrounds with leading institutions of higher education that provide scholarships. Dent said he had to adjust to UVA’s culture, which includes many students who are financially well off.

“UVA is definitely a different environment from Las Vegas and where I went to high school,” he said. “But I came here focused on succeeding, and it helped that I didn’t have to hold down a job while in school. The scholarship gave me my own economic power and connected me with other QuestBridge Scholars at the University with similar economic backgrounds, including my housemate, which has helped me make the transition. It has allowed me to connect with people here with similar interests and enjoy everything Virginia has to offer.”

Dent loves the outdoors, and that he can “experience all four seasons” at Virginia’s latitudes and altitudes.

A serious skateboarder since age 10, he and his “older” triplet brother (by two minutes), Kenneth, and his eldest brother, Daniel, once considered opening a skateboard shop and designing their own boards. Dent’s love for the sport has continued, and he takes breaks from school by skating often at a Charlottesville park.

And he has transitioned to snowboarding, something he had not done prior to coming to Virginia. He’s spent a lot of winter weekends on the slopes at Wintergreen and elsewhere being a member of UVA’s Virginia Alpine Ski and Snowboard Team since his first year.

Another “first” he’s experienced since coming to the University is a study-abroad marine biology course he took in the Bahamas, the first time he’d been out of the U.S and the first time he snorkeled on vibrant reefs.

“That was an incredible, life-changing experience,” he said. “I plan to take more trips like that in the future.” He also wants to try fishing and kayaking.

Academically, Dent has focused on science and biotechnology courses, and has come to realize he wants a career in chemistry. He has worked two years in the lab of chemistry professor James Landers, conducting research on new body fluid analysis methods for forensic science. He is a co-author on two soon-to-be-published papers in leading chemistry journals.

“As a second-year [student], David was tenacious in requesting a research position in my lab – I like that kind of persistence – and he hasn’t disappointed,” Landers said. “He brought an upbeat attitude to the lab and worked hard to contribute solid data to our research, demonstrating curiosity and determination. Whether it’s his humble beginnings, the constitution of his DNA, or some combination of both, David is destined to be successful in a way that will make the chemistry department, UVA and his family proud.”

In the summers, Dent has returned home to work in the same store where he bagged groceries as a high schooler. But with his chemistry training, he earned Nevada pharmacy technician certification and began work in the pharmacy. And in his fourth year at UVA he has been working 25 hours a week in the pharmacy department at a Charlottesville Kroger.

This summer, he plans to take clinical pharmacy courses at Virginia Commonwealth University, then apply to the pharmacy graduate program there. “I’ve already got my foot in the door at Kroger, and it would be great to eventually become a pharmacist with the company,” he said.

Wherever he works or goes, Dent plans to “spread the word” about QuestBridge and the value of college for low-income students with the ability to achieve. He already has made several visits to local high schools.

“I wouldn’t be here if it weren’t for this great scholarship and the people who’ve helped me along the way, especially my mom, who’s been my inspiration,” he said. “I worked hard for this, and I want others to know there are opportunities for hard-working people who don’t have socioeconomic advantages. It’s not a handout; it’s an opportunity. I’ve had an awesome experience.”

He’ll soon add another experience at UVA: his mother seeing him walk the Lawn on Finals Weekend.

How a Single Email Changed a Life END_OF_DOCUMENT_TOKEN_TO_BE_REPLACED

Fall Is in the Air on Grounds END_OF_DOCUMENT_TOKEN_TO_BE_REPLACED

At UVA, There Is a Club for Everyone END_OF_DOCUMENT_TOKEN_TO_BE_REPLACED