First QuestBridge Scholars Excel on Grounds, Are Poised to Graduate 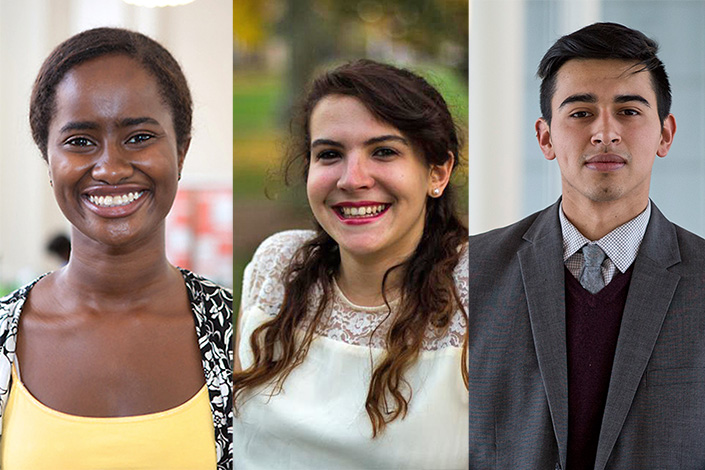 The idea of attending the University of Virginia was not even on the radar when Heather Berg was in high school. But a national program that U.Va. joined four years ago changed all of that.

The program, QuestBridge, connects high-achieving students who may have obstacles to attending college with some of the country’s best universities. In 2010, U.Va. joined the group of elite QuestBridge partners, which includes Princeton, Stanford, Yale, Emory and Dartmouth universities.

This spring, Berg and seven others are on track to become the first QuestBridge scholarship recipients to earn their degrees from U.Va.

“It’s worked out so that everything I’ve wanted to do has been an option for me,” said Berg, who will graduate from the Frank Batten School of Leadership and Public Policy. “From a personal standpoint, I never would have studied abroad or done a lot of things that I’ve done in college if I wasn’t a part of QuestBridge.”

Gregory Roberts, dean of undergraduate admission, said he is heartened, but not surprised by the students’ accomplishments.

“It’s hard to believe it’s been four years since we admitted our first QuestBridge class. I’ve enjoyed getting to know these extraordinary students during their time on Grounds,” Roberts said.

“This group set the foundation for future classes of QuestBridge students who have enrolled and thrived at the University, often despite tremendous hardship and life obstacles. These students are hard-working, dedicated, smart and resilient, and while we are inspired by their stories, we are most moved by their accomplishments here on Grounds. Working with this group has been a highlight of my career in higher education.”

The QuestBridge application process reflects the competitiveness of the program.

This year, QuestBridge received 11,654 applications for the mid-September deadline. By mid-October, 4,180 finalists were selected and invited to apply to and rank eight of the QuestBridge partner schools. Through the QuestBridge match program, scholars are matched with the school that falls highest on their list and accepts them.

Of the 4,000-plus finalists, U.Va. typically receives 300 applications and offers about 10 scholarships, which cover tuition, fees and living expenses.

When reading the QuestBridge applications, U.Va. considers the applicants in a unique pool of their peers.

“When we’re reading these QuestBridge applications, we’re seeing students who have achieved despite life challenges,” said Valerie Gregory, associate dean in the Office of Undergraduate Admission and director of outreach.

The life experiences reflected in the applications have included both challenging and atypical family stories. Nevertheless, each scholar proved a standout in high school, with academic records that matched or exceeded U.Va.’s admission qualifications.

In addition to working throughout high school, Berg received a 3.8 unweighted grade-point average. She excelled on standardized tests as well, scoring a 2020 on her three-part SAT and 32 on the ACT. The median range for SAT scores at U.Va. is 1870 to 2180, and 28 to 33 for the ACT.

“Their stories are just incredible and they’re academically off the charts,” Gregory said.

The 2015 graduating class of QuestBridge scholars ranges from Hawa Ahmed, whose mother was a 15-year-old bride and had her in a refugee camp, to Marvin Nogueda, who managed to escape the gang life of his neighborhood by finding companionship in television and books. Nogueda is a fourth-year student staying an additional year to earn his master’s degree from the Curry School of Education.

Gregory has dubbed Ahmed the “political activist” of the QuestBridge scholars. In the summer of 2013, she biked 4,256 miles across the U.S., while building houses along her journey with the Bike-and-Build program. She is also president of the Alcohol and Drug Abuse Prevention Team, a resident adviser and a first-year seminar mentor. Ahmed participates in these activities in addition to her work with the admission office and the Office of Orientation and New Student Programs. She also spoke about her college experiences at TEDxCharlottesville in November 2013.

Berg, on the other hand, has studied abroad four times while at U.Va., including traveling around the world with Semester at Sea. She also interned in Mpumalanga, South Africa for ThinkImpact, as well as in U.Va.’s Office of Admission. She serves as a moderator with Sustained Dialogue, an organization that brings U.Va. community members together to discuss conflicts, in addition being a founding member of the Restore AccessUVA campaign.

Nogueda laughs at the memory of joining 13 clubs during his first year, yet he remains extremely involved. He is now a student representative on the Curry Foundation Board, a member of the Peer Mentoring Program and the Living Wage Campaign. He also serves as a student ambassador.

As for the other graduating QuestBridge scholars, Natalie Luque is the president of the Latino Student Alliance. Allie Kerstein is a student in the McIntire School of Commerce and a sister of Alpha Chi Omega sorority who also spends her time volunteering with the Bridging the Gap and Day in the Life Madison House programs.

Gregory calls Tiffany Lindsay “the next great novelist.” Jean-Philippe Nau is involved with the Gates Millennium Scholars Network on Grounds, and works as an operations manager at Newcomb Hall while also working in the Office of the Dean of Students. Additionally, he is vice president of the Collegiate 100 Society at U.Va. Arianna Trickery has taken on leadership roles with different organizations around Grounds, including “To Write Love on Her Arms,” a nonprofit dedicated to helping those struggling with addiction and depression, in addition to volunteering with Madison House and working as a barista.

Expanding the Meaning of Diversity

The QuestBridge program is an important part of the University’s efforts to increase socioeconomic diversity.

U.Va. meets 100 percent of the demonstrated financial need of all undergraduate students through its AccessUVA financial aid program. It is one of only two public universities in the country to meet 100 percent of need of all in-state and out-of-state students, while also offering admission on a need-blind basis. That means the University considers a potential student’s financial situation only after an offer of admission is extended.

The University also provides assistance for high-achieving students with financial need through the Blue Ridge Scholarships, launched in 2014 with an $8 million matching pledge program from Board of Visitors member and U.Va. alumnus John Griffin.

About 34 percent of undergraduate students have demonstrated financial need, up from 24 percent in 2004.

“Whenever you said ‘diversity’ 10 years ago, people’s minds went immediately to race. I think because of the different waves we’ve had, diversity has broadened itself,” Gregory said.

Today, around 30 percent of U.Va. students are minorities, including African-American students, American Indian and Alaskan Native, Asian, Hispanic, Native Hawaiian and Pacific Islander, as well as students who describe themselves as multi-race.

Berg concurred. “The more voices and perspectives that you can get in a classroom really enriches everyone’s experience. I know I’ve really benefited from people with backgrounds different from my own.”

Gregory said she believes one of the key elements of increasing diversity is breaking down the perceived walls that traditionally surround the U.Va. image.

For Ahmed, a foreign affairs major, breaking down the walls has meant standing on the front lines of the University’s initiative to increase diversity. She was a member of U.Va. President Teresa A. Sullivan’s Task Force on Access and Communication, which provided recommendations on how to increase the acceptance of admission offers made to minority students.

“There are a lot of urban legends associated with the image of U.Va. This image of a preppy, white, homogenous place – that’s not true,” Ahmed said. “There are a lot of students here who are people of color and low income, who are having a great time but just don’t talk about it. We should be celebrating the success that we do have.”

For Ahmed, the idea of going to college was at best a remote possibility.

“I didn’t think college was anywhere in my future,” she said. “I always thought about college, but as for seeing myself there, it was kind of a black hole. I didn’t really think much about it.”

“I didn’t really realize how bad it was growing up, because that was the only experience I ever had. I didn’t have anything to compare my experience to,” she said.

Nogueda had a similar financial experience. “I never knew I was growing up in poverty. My mom had a stable, low-income job, but she was the only one working [and bringing in] the only income we had in our home,” he said.

“Still to this day, I can remember the doubts that I had [about QuestBridge]. It is a scholarship that pays for you to go to school, but that sounds too good to be true,” Ahmed said.

As she nears graduation, Ahmed describes QuestBridge as her “happy ending.” But for each of these students it’s clear that U.Va. is only the catalyst for advancement in their lives.

“I have such optimism and belief that these students will continue to be movers and shakers when they go out into the world,” Gregory said. “We can all be proud that U.Va. has helped them become true difference-makers.”

What’s the True Story of Brooks Hall? This Architectural Historian Has the Answer END_OF_DOCUMENT_TOKEN_TO_BE_REPLACED

At UVA, There Is a Club for Everyone END_OF_DOCUMENT_TOKEN_TO_BE_REPLACED