Class of 2017: Combat Vet, Singer-Songwriter Ready for Next Challenge: Business 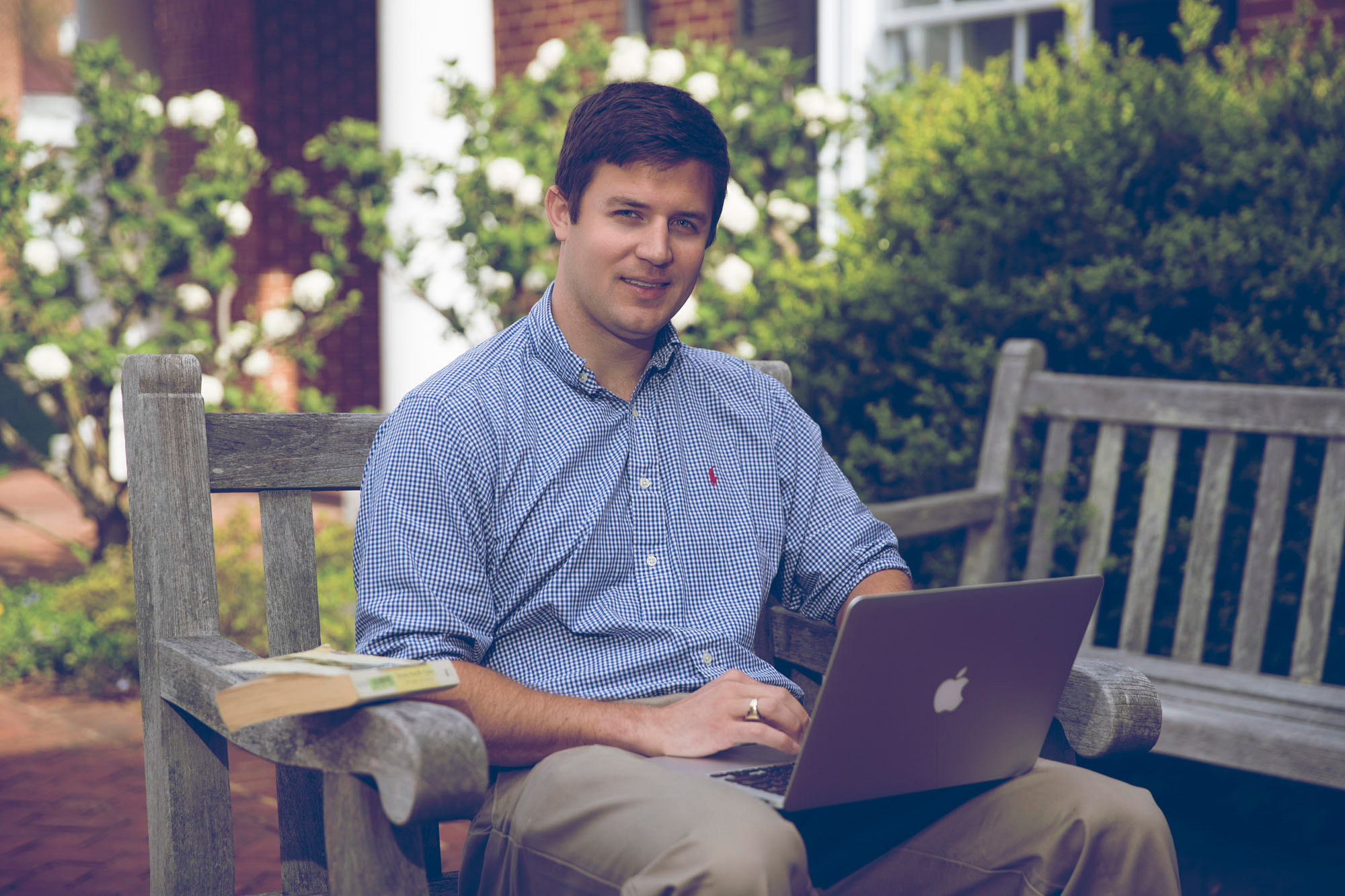 Bingley “Barker” Squire, who will graduate in May, came to UVA’s Darden School of Business after four years in the Marine Corps. (Photo by Dan Addison, University Communications)

Bingley “Barker” Squire first realized he could sing in public when his middle school choir director persuaded him to play the Beast in the school’s stage version of the Disney classic, “Beauty and the Beast.”

“I knew I could sing at an early age, but I had not sung in front of anyone else until then,” Squire said. “I enjoyed it, and it gave me more confidence.”

In the decades since that first performance, Squire, who will graduate from the University of Virginia’s Darden School of Business in May, has tested his abilities on several different stages. He has served as a captain in the U.S. Marine Corps and completed a tour of duty in Afghanistan, earned multiple scholarships to finance his education at Darden and proposed to his fiancé, fellow Darden student and second-year class president Molly Duncan.

He also hasn’t let his musical talent go to waste; he is a published singer-songwriter and the president of Darden’s a cappella group, the Cold Call Chorus. His self-titled album, published in 2014, includes original country and jazz tracks inspired by the places he has been and the people he has met.

Finance professor Marc Lipson, one of Squire’s mentors who also plays alongside him in a faculty-student band, said that Squire’s creativity helps him to stand out even among a class of extraordinary achievers.

“Creativity is more than anything an outgrowth of cooperative thinking. You have to want to work with other musicians, respect each other and put the group ahead of your own performance, and Barker brings that quality to any group,” Lipson said. “He is more than a magnificent student. He has the ability to bring people together to do things that are meaningful in a way I have never seen other students be able to do.”

Squire, who grew up in Emporia, earned his undergraduate degree from the Virginia Military Institute, where he graduated as the second-highest-ranking cadet militarily and highest-ranking cadet academically. He subsequently served four years in the Marine Corps, including a 2012-13 stint in Afghanistan, where he commanded a 100-person outpost and supervised 300 combat missions.

“I had an interest in the military from an early age, and I think some of that came from my grandfather, who served in World War II,” Squire said. “I was interested in leading and helping other people, and looking for opportunities where I really could lead, make an impact and be a part of something bigger than myself.”

In Afghanistan, Squire worked with fellow Marines, the Afghan army and police force and local tribal elders to promote peace in the region. He challenged himself not only to master the logistics of running a base nearly 30 miles from the nearest military outpost, but also to learn a bit of the local language, Pashtu, and bridge the cultural divide between the American Marines and the Afghan citizens.

“I learned how to negotiate and work through all kinds of problems in a Third World country,” he said. “On the whole, the Afghan people were very nice. They just wanted to keep their families safe and make a living, and unfortunately they are in a part of the world where that is really hard to do.”

Squire also discovered that he truly enjoyed, and had a talent for, building organizations. After four years in the military, he was eager to test that talent in civilian life, and business school seemed like a natural next step.

“I had a tremendous experience in the military, learned so much about myself, about leadership and working with other people,” he said. “I also have a creative side and love building organizations, and my ability to do that in the military was somewhat restricted. I wanted a bit more autonomy.”

At Darden, Squire, who studied history at VMI, focused on mastering finance and other quantitative skills and exploring entrepreneurship. He also continued his interest in history, taking courses like “Post-Watergate U.S. Presidents,” taught by Darden professor and former dean Robert Bruner.

“We have been working through the memoirs of post-Watergate presidents, starting with Ford and concluding with our current president,” Squire said. “I love reading about the situations that heads of state found themselves in and seeing how they worked through those situations.”

To hone his general management skills, Squire spent last summer working for a subsidiary of the Danaher Corporation, helping the manufacturing firm launch a new customer platform. After graduation, he plans to purchase and manage a company in Charlotte, North Carolina, where his fiancé has accepted a position with consulting firm McKinsey & Co.

“Longer-term, I would love to start my own business, but right now I am hoping to buy an existing business,” he said, noting that the scholarships he received, including the Colonel James L. Fowler USMC Scholarship and the Frank E. Genovese Second-Year Fellowship, have made it possible for him to take on that challenge. “Those scholarships have helped me limit my debt and feel more comfortable about the large risk that I am about to take on.”

Whatever comes next, he is confident that his time at Darden has prepared him well.

“I am much more equipped now,” Squire said. “I have always had the passion and the desire to build great things, but I have such a great foundation now to actually do that and do it successfully.”

How a Single Email Changed a Life END_OF_DOCUMENT_TOKEN_TO_BE_REPLACED

Fall Is in the Air on Grounds END_OF_DOCUMENT_TOKEN_TO_BE_REPLACED

At UVA, There Is a Club for Everyone END_OF_DOCUMENT_TOKEN_TO_BE_REPLACED