Class of 2017: Sisterhood Sees These First-Generation Students to Graduation 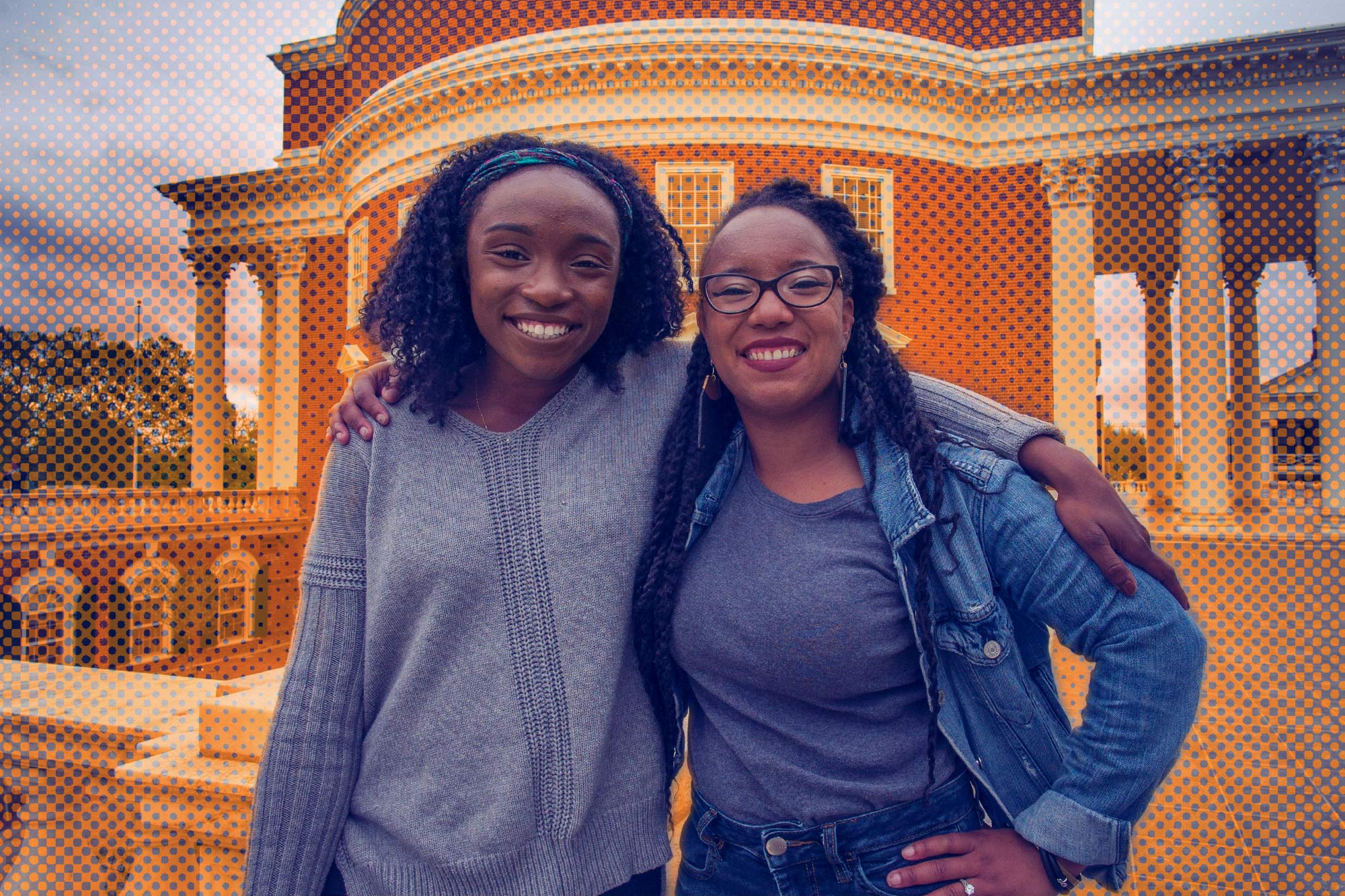 Shontell and Tonyette White, 22 and 26 respectively, will walk the Lawn Sunday as part of the Class of 2017. (Photo by Dan Addison, University Communications)

Four years – and little else – separate these two sisters.

This Sunday, Tonyette White will pass the baton to her younger sister, Shontell, when they both walk the Lawn as graduates of the University of Virginia. The elder sister is earning a Master of Education degree in counselor education from the Curry School of Education. Shontell will enter that program in August; for now, she is earning a B.A. in sociology from the College of Arts & Sciences and a B.S. in education, youth and social innovation from the Curry School.

Both first-generation college students from Danville, the White sisters could never have predicted how closely their paths would mirror one another; both are striving to become school counselors. They trace their inspiration to the caring nature of their parents, Tony and Belinda, who both work in health care in Danville and have dedicated themselves to helping those who cannot help themselves.

Shontell described that dedication in her application essay to UVA. She described an elderly man with cerebral palsy whom her mother and father had been caring for since Shontell was in the eighth grade. “I wrote about how I am so inspired to reach my dreams when I see him cross-stitching or painting. He is so articulate.

“When you are able-bodied and you see someone disabled every single day doing things, how can you not be inspired?”

On a recent overcast day at the Rotunda, the sisters talked animatedly about their lives, often finishing one another’s sentences.

Tonyette’s master’s degree from the Curry School will be her second degree from UVA. She earned her undergraduate degree in 2013, double-majoring in psychology and sociology.

Shontell followed her sister to UVA in 2014, even though she swore she was headed to James Madison University. “We had UVA everything in the house. We had UVA lawn chairs, hats, shirts – that was all I had around me, so I was just not into it,” she said. “I was all about paving my own way and doing my own thing.”

But her high school performance and that touching essay led to an offer from UVA, something she hadn’t anticipated.

“I started talking with Tonyette – she was definitely encouraging me to consider it as an option,” she said. “My parents were all about it.” So Shontell accepted UVA’s offer.

Both sisters excelled in their undergraduate programs. After earning her undergraduate degree, Tonyette spent two years working at UVA’s Virginia College Advising Corps, a “near-peer” program that pairs recent college graduates with backgrounds similar to the high school students they help steer toward college. Tonyette had taken advantage of the corps herself when she was in high school and liked the work immensely. But she felt she didn’t have all the tools she needed to help her students.

“I noticed that many really had a lot of needs that I couldn’t meet because I didn’t really have the background or the training,” she said, as Shontell listened across a mahogany table. “So I decided to come back to UVA to pursue counselor education.

“I really wasn’t trying to come back to UVA after four years,” she added, laughing, “But I really loved the program and Curry is amazing and the professors are amazing – so they kind of sucked me back in.”

How exactly? Both sisters say the allure is in the school’s approach to interviewing applicants for the counselor education program.

“It was like something I had never seen before,” Shontell said. The other graduate programs she applied to featured one-on-one or small-group interviews. “At the Curry interview day, they invited all the applicants. They pretty much put you in the same room with all those people. It’s super cool, because if you have a desire to be a counselor, most times you are a supportive person and want to be there.”

Shontell, grinning broadly, said Curry “sucked” her back in, too. She is excited at what the future holds in graduate school.

For her part, Tonyette is applying for jobs and busy planning her wedding.

So both White sisters, who set out to chart their own paths, seem destined to end up in the same place: at schools helping young students perhaps realize what they themselves have achieved, being able to say, “I have worn the honors of honor. I graduated from Virginia.”

How a Single Email Changed a Life END_OF_DOCUMENT_TOKEN_TO_BE_REPLACED

Fall Is in the Air on Grounds END_OF_DOCUMENT_TOKEN_TO_BE_REPLACED

At UVA, There Is a Club for Everyone END_OF_DOCUMENT_TOKEN_TO_BE_REPLACED