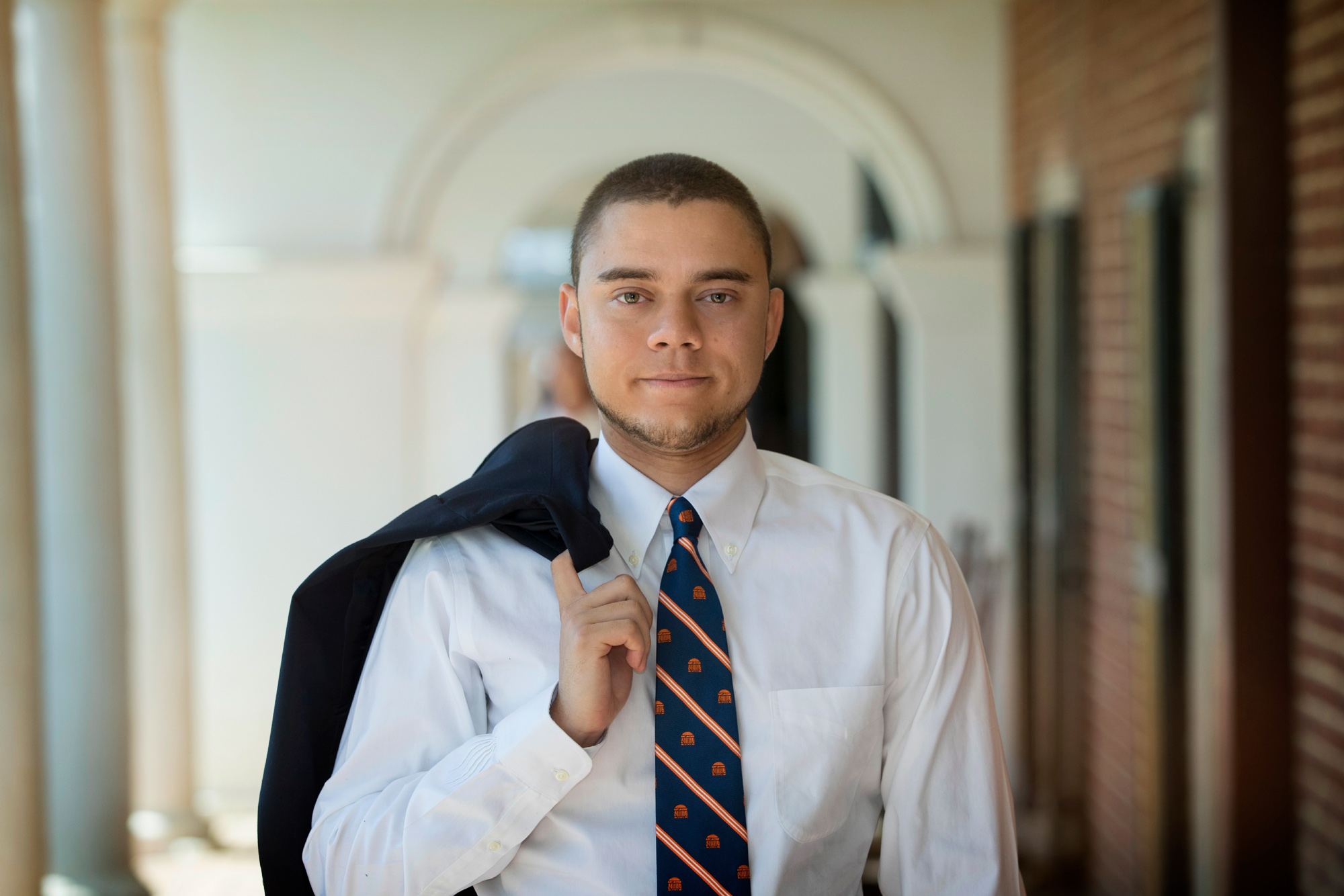 Jacob Uskavitch, an aspiring doctor-to-be, lived on the Lawn and delved into the student experience at UVA. (Dan Addison, University Communications)

Students playing in the snow – that’s what sold Nashville native Jacob Uskavitch on coming to the University of Virginia (and not his parents, who are both UVA alumni).

A March snowstorm four years ago coincided with his visit for Days on the Lawn, an open house for prospective Wahoos offered admission. He saw students enjoying themselves outside as they trudged to and from classes, which were not cancelled, he said.

Over the years, Uskavitch has excelled as an active, successful student, from serving as chair of the Black Presidents Council, a coalition of African-American student leaders, to mentoring young students at Clark Elementary School. He explored a variety of activities, especially those that emphasize a sense of belonging and paths to success for black male students on Grounds.

For Uskavitch, who lived on the Lawn this year and will walk down it when he graduates May 20, that student experience has also been heavy on the academic side: The Echols Scholar and Ridley Scholar double-majored in chemistry and African-American and African studies, complete with a distinguished majors thesis.

He even participated in UVA’s Snapchat takeover, which allows students to tell the University’s followers a story showing a day in their life on Grounds. Uskavitch looked like he had fun, whether introducing friends or promoting voter registration. He explained his two majors, his biracial background and the organizations he has joined. When a follower asked what makes UVA unique, he cited the student experience, including student self-governance.

The Office of African-American Affairs has been one of his favorite places, he said, for hanging out, studying and participating in programs. He mentioned the Black Male Initiative in particular, a program begun about six years ago through the office’s Luther P. Jackson Cultural Center.

“The Black Male Initiative is a great organization on Grounds, and good for networking,” said Uskavitch, who was on its executive board. The group brings together black men – students, faculty, staff and even alumni – who otherwise are often separated in different departments and schools, for the purpose of increasing academic and social success.

One of the first examples that demonstrated the power of mentoring to Uskavitch came as soon as he arrived on Grounds, via the Office of African-American Affairs’ Peer Advisor Program. All black first-year and transfer students are assigned an upper-class peer adviser, who proffers friendly advice and support during the college transition. Last year, Uskavitch himself worked as a senior peer adviser, also involved in selecting and training the next cadre of student advisers.

Appreciating the role models he found at UVA, he wanted to give back, too, he said. He now has become a role model in several other settings, besides as a peer adviser: as a Lawn resident, which included helping plan events for the community; as a tutor through his fraternity, the Iota Beta chapter of Alpha Phi Alpha, for which he served as president; as a student ambassador working at the Rotunda; and as a participant in the Admission Office’s Fall and Spring Fling events for admitted African-American students.

Associate Professor of History Claudrena Harold has known Uskavitch since his first year and was his thesis adviser this year.

“Upon my first encounter with Jacob, he struck me as one of those special students with the potential to leave an indelible mark on the University of Virginia,” she said. “He is doing the kind of work that will greatly enrich our understanding of the diversity and beauty of the black student experience at UVA. His thesis is first-rate.”

In his research, Uskavitch collected oral accounts from black male students and found that groups and programs created specifically for them enhance a sense of belonging and pave the way for their success at UVA. The information “indicates that black male student groups are a focal point for the development of their members,” he writes in his thesis summary. “They’re a big influence,” he said.

“He has been a leader within and beyond the classroom in terms of his scholarship and his engagement with critical issues at the University,” Harold said.

Through the Black Presidents Council, he and other black students represent some 30 student organizations and work to aid the African-American community through advising, advocacy and celebration. The council has met with different administrators to address a variety of issues.

“Having our voices heard is important as part of improving race relations,” Uskavitch said.

With his double major, he has pursued an interdisciplinary course of study that “has provided him with a strong foundation in the humanities, social sciences and the hard sciences. He embodies the best of the liberal arts tradition,” Harold said, adding that it should serve him well in his intended medical career.

Uskavitch will return to his home state after graduation to attend Meharry Medical College in Nashville, the second-oldest medical school in the nation for African-Americans, founded in 1876. He plans to pursue internal medicine and work in an underserved area.

How a Single Email Changed a Life END_OF_DOCUMENT_TOKEN_TO_BE_REPLACED

Fall Is in the Air on Grounds END_OF_DOCUMENT_TOKEN_TO_BE_REPLACED

At UVA, There Is a Club for Everyone END_OF_DOCUMENT_TOKEN_TO_BE_REPLACED