Class of 2018: Cory Paradis Will Leave UVA More Accessible Than He Found It 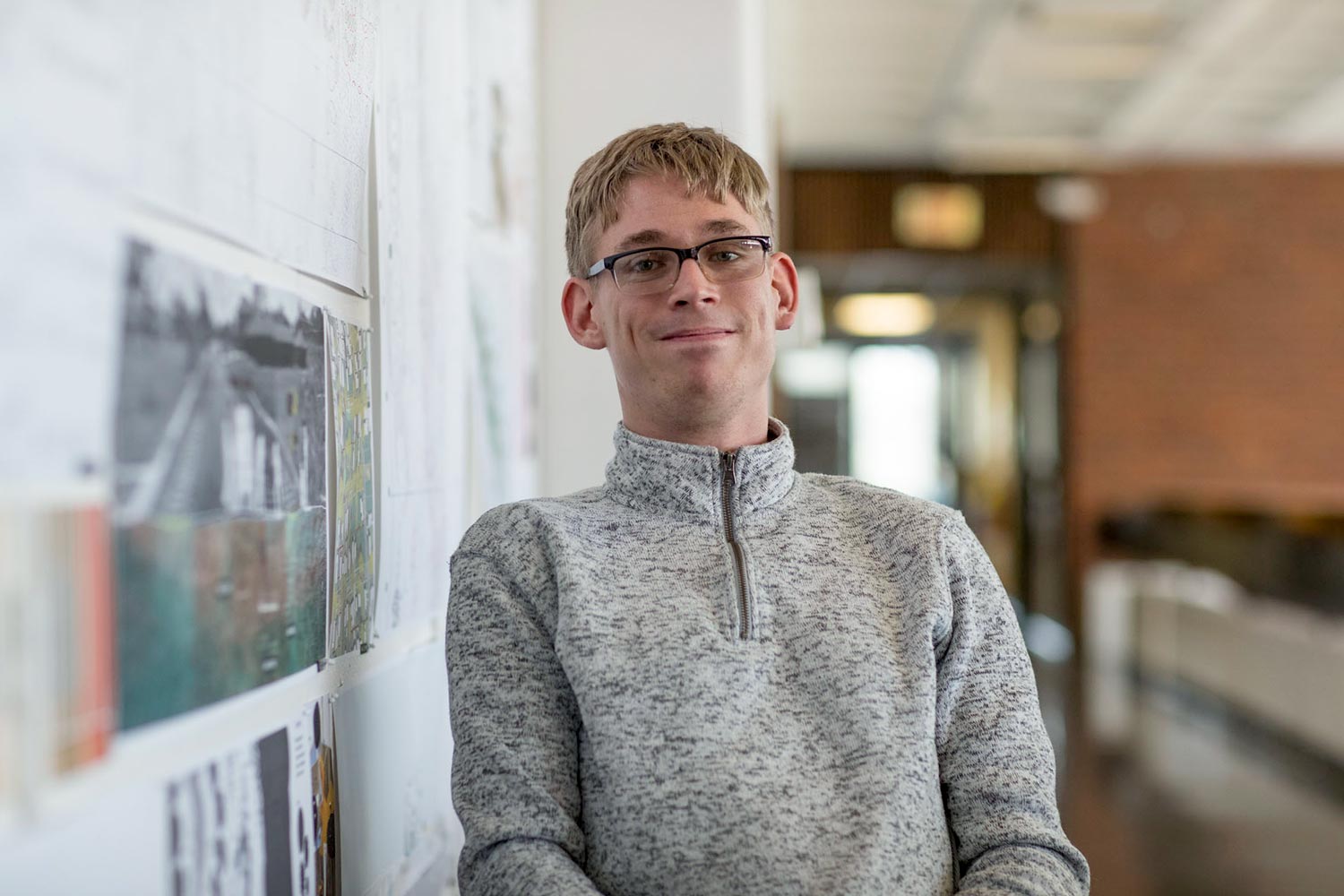 Cory Paradis devoted much of his studies to issues surrounding the Americans With Disabilities Act and concerns about accessibility. (Photo by Dan Addison, University Communications)

Cory Paradis transferred to the University of Virginia with a mission: he wanted to make homes, buildings and cities more accessible to people like him.

Paradis, who will graduate from the School of Architecture on Sunday, was born with cerebral palsy and has been in a wheelchair most of his life. He knows firsthand how uneven sidewalks, non-automated doors or steep hills can turn what should be a simple journey into an obstacle course.

As a child, those obstacles were an accepted part of his life. Then, when he started taking a few architecture and drafting classes in high school, he realized that he could make a career of solving the same problems that he ran into every day.

“At first, growing up, you don’t really understand what the problems are, because they have always been there,” he said. “Once I realized that I could do something to change these issues, impact the built environment in a positive way and get rid of barriers to make it easier for people to move through their daily lives, that was pretty intriguing to me.”

Paradis, who grew up in Fredericksburg, originally attended Longwood University but struggled in some of his classes and realized that he had not been quite ready for the transition from high school to college. He came back to Fredericksburg and enrolled in nearby Germanna Community College, where he excelled and built up enough credits to transfer to UVA in the fall of 2015.

“Even though neither of my parents went to college, I have a lot of other family members who have gone to UVA,” he said. “I had always known about UVA, the traditions here and how good of a school it is.”

He also knew exactly what program he wanted to transfer into: urban planning in the School of Architecture.

“I’ve really fallen in love with urban planning – it’s such a cool field,” he said. “I always thought I wanted to do architecture, and now I think of urban planning as large-scale architecture, with more of an opportunity to impact the built environment in a positive way.”

Throughout his three years in the urban planning program, Paradis concentrated on issues of accessibility. In one class with architecture professor Anselmo Canfora, Paradis served both as a research assistant and a student as he encouraged classmates to consider accessibility concerns early in their design process. He told them about the challenges he faces each day, gave feedback on their designs and even shared his wheelchair for a few hours so that students could experience obstacles firsthand.

“I think it helped to give them an actual person they were designing for, instead of an abstract concept,” he said. “It was really cool for me to be able to share my experiences with them and give them a glimpse into some of the issues I deal with. I tried to help them see that is really a design problem, and that you can build a design around it.”

Canfora – a Chicago Cubs diehard who loves to talk baseball with Paradis, a Washington Nationals fan – called the student’s impact on his class “absolutely transformative.”

“Students were already committed to developing inclusive, accessible designs, but Cory was critical in giving them a much more realistic, clearer understanding of the challenges that people with disabilities face on a daily basis,” he said. “He really dedicated an amazing amount of time and effort to giving feedback, in addition to completing the course as a student.”

“All of my professors have been so supportive, and have let me explore accessibility and ADA issues,” he said. “They have given me a lot of creative freedom to write about things that really interest me.”

Already, Paradis is seeing the fruits of his labor around Grounds. He did accessibility studies of Brown College, where he lives, and UVA’s Arts Grounds to help pinpoint problems and possible solutions, and he also served on the University’s Barrier-Free Access Committee.

That committee, which includes administrators, faculty members and students, makes recommendations and provides oversight to ensure the University’s compliance with the American With Disabilities Act. Among other innovations, the committee created the Report A Barrier tool to allow any member of the University community to easily report accessibility issues online.

Paradis realizes that some of his reform proposals won’t take effect until after he graduates, but he finds a lot of satisfaction in knowing that he has smoothed the way for the students who will follow him.

“One of the things I really stressed when I first started working with other students in the Architecture School was that this was not just for me,” he said. “This is for anybody that might come after me.”

Canfora said that attitude was typical of Paradis.

“Cory has an amazing spirit. … He is very optimistic and a realist at the same time,” the professor said. “He understands the challenges and how the system works, and he is willing to commit a lot of time and effort to improving that.”

After graduation, Paradis hopes to continue and expand his work to the broader Charlottesville community. He is in the process of applying to several ADA compliance jobs in the area and wants to continue calling the city home.

“I want to stick around Charlottesville, if I can,” Paradis said. “I really like the community and the culture here, and I’m really grateful for the experience I have had here.”

How a Single Email Changed a Life END_OF_DOCUMENT_TOKEN_TO_BE_REPLACED

Fall Is in the Air on Grounds END_OF_DOCUMENT_TOKEN_TO_BE_REPLACED

At UVA, There Is a Club for Everyone END_OF_DOCUMENT_TOKEN_TO_BE_REPLACED