Class of 2018: Farmer-Turned-Nurse Ready to Give the Best to His Patients 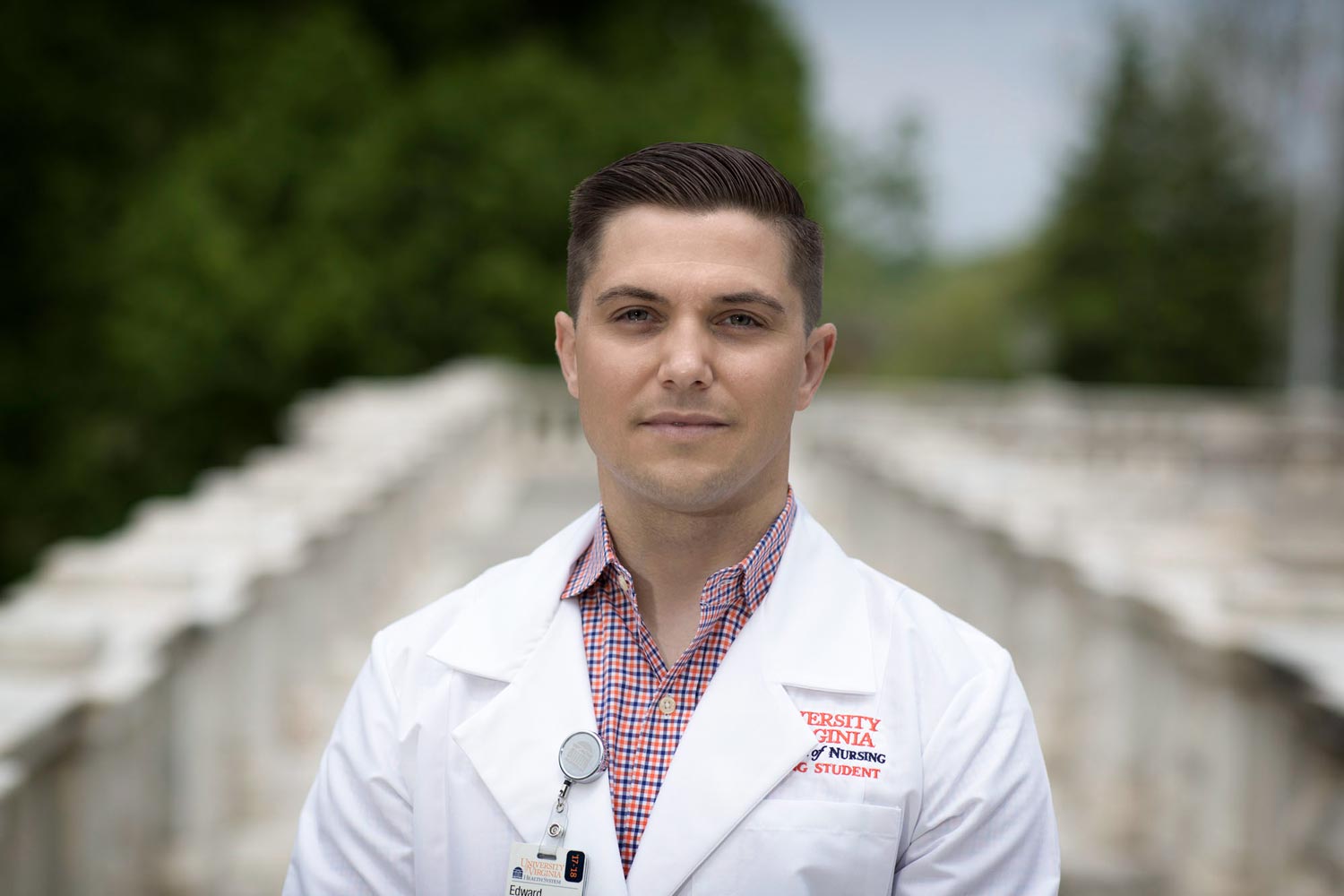 A former EMS volunteer, Blake Duffer often wondered what happened to patients after he dropped them off at the hospital. That question eventually led to a career in nursing. (Photo by Dan Addison, University Communications)

If cultivating neat rows of tobacco and wheat from atop the bulk of farm machinery was Blake Duffer’s early passion, tending patients close at the bedside is what satisfies him these days.

Despite his circuitous route into nursing, Duffer – originally from Charlotte County and earning his master’s degree in nursing from the University of Virginia this month – said it couldn’t have happened any other way.

He worked with tractors and heavy machinery on a local farm starting in middle school, but scratching an itch to work in public safety, became an emergency responder as a high school junior. That satisfied his appetite for science and clinical work, even as he found himself wondering to himself on ambulance runs “(what) happened after we dropped patients off at the hospital,” he said. “What happened to them next?”

After earning a degree in emergency management and homeland security from Virginia Tech in 2011, Duffer took a job in the Virginia Commonwealth University Medical Center’s emergency department, where he admired nurses’ proximity to their patients. That is when the nursing bug bit him.

“While there were so many members of the health care team that interacted with the patient, it was always the nurses who were there the whole time, for their whole course of stay,” Duffer said.

A UVA School of Nursing recruiter urged him to apply to the school’s Clinical Nurse Leader program. A fast track for individuals who are outside the profession, but have at least a bachelor’s degree, it is the first of its kind in Virginia.

Duffer laughs as he recalls his mother’s incredulity at the pivot.

“She said, ‘You’re going to quit a well-paying, full-time job to go back to school again?’” Duffer laughs. “‘Yup,’ I said. I stepped out on that limb, and the limb hasn’t broken yet.”

Arriving at UVA in the spring of 2016 as a Conway Community Scholar, Duffer began his immersion and quickly realized that while some of the clinical skills he’d developed as an emergency responder were transferrable, “nursing is way different from EMS,” he said.

While the course load and clinicals were intense in year one –  “I was a ball of stress,” he recalled – Duffer soon realized his growing body of knowledge boosted his caregiving confidence. By year two, the pieces began to fit together.

“For me, there were all these islands of knowledge and in the first year you’re trying to connect all the dots,” he said. “Second year, though, you can figure out what the next step is without getting off your rhythm. By the time I did my capstone [a final scholarly project], I felt it was all coming together.”

Working in a surgical trauma intensive care unit for his practicum, Duffer’s final project examined the efficacy of a novel pain scale. It looked at patients’ discomfort and at their ability to return to normal daily activities like walking, sitting, reading and dressing – so-called functional recovery. Conducting a small pilot study, he worked with physical and occupational therapists to determine whether the tool would be a good fit.

“Patients who get up and get moving after surgeries feel better, experience fewer infections, stay in the hospital for fewer days,” Duffer explained. “Pain and pain assessment are a big priority, especially in the surgical trauma intensive care unit environment. It’s a very real issue we’re dealing with.”

After walking the Lawn May 20, Duffer, 32, will continue in his role in VCU’s surgical trauma intensive care unit, a fitting end that fuses his abilities in rapid response with his desire to orbit closely and purposefully around his patients. And even if he occasionally misses life as a farm hand (“It’s peaceful,” he says, “being out there, all day long”), Duffer said he’s arrived in this second profession at a point in his life that’s right, in a place that still feels like home.

“I might’ve been able to do this in my early 20s,” he laughed, “but I have professional and life experience, am more mature and I feel like that’s helped me to be successful. This way, I feel like I’m still helping serve the people who live where I’m from.”

Duffer has also left an impression on the professors, peers and staff who’ve watched him grow into a nurse.

“Blake brings a curiosity to his nursing and I’ve enjoyed watching him grow as a critical thinker,” said assistant professor Tim Cunningham, also a graduate of the Clinical Nurse Leader program. “It’s no longer appropriate for nurses to simply learn things and spit them back out. Duffer uses curiosity and creativity to ask the hard question: How can I provide the best care to my patients?”

“The CNL program is accelerated, but amazing,” program director and professor of nursing Emily Drake said. “We have the best students and people like Blake are destined to do great things”

How a Single Email Changed a Life END_OF_DOCUMENT_TOKEN_TO_BE_REPLACED

Fall Is in the Air on Grounds END_OF_DOCUMENT_TOKEN_TO_BE_REPLACED

At UVA, There Is a Club for Everyone END_OF_DOCUMENT_TOKEN_TO_BE_REPLACED