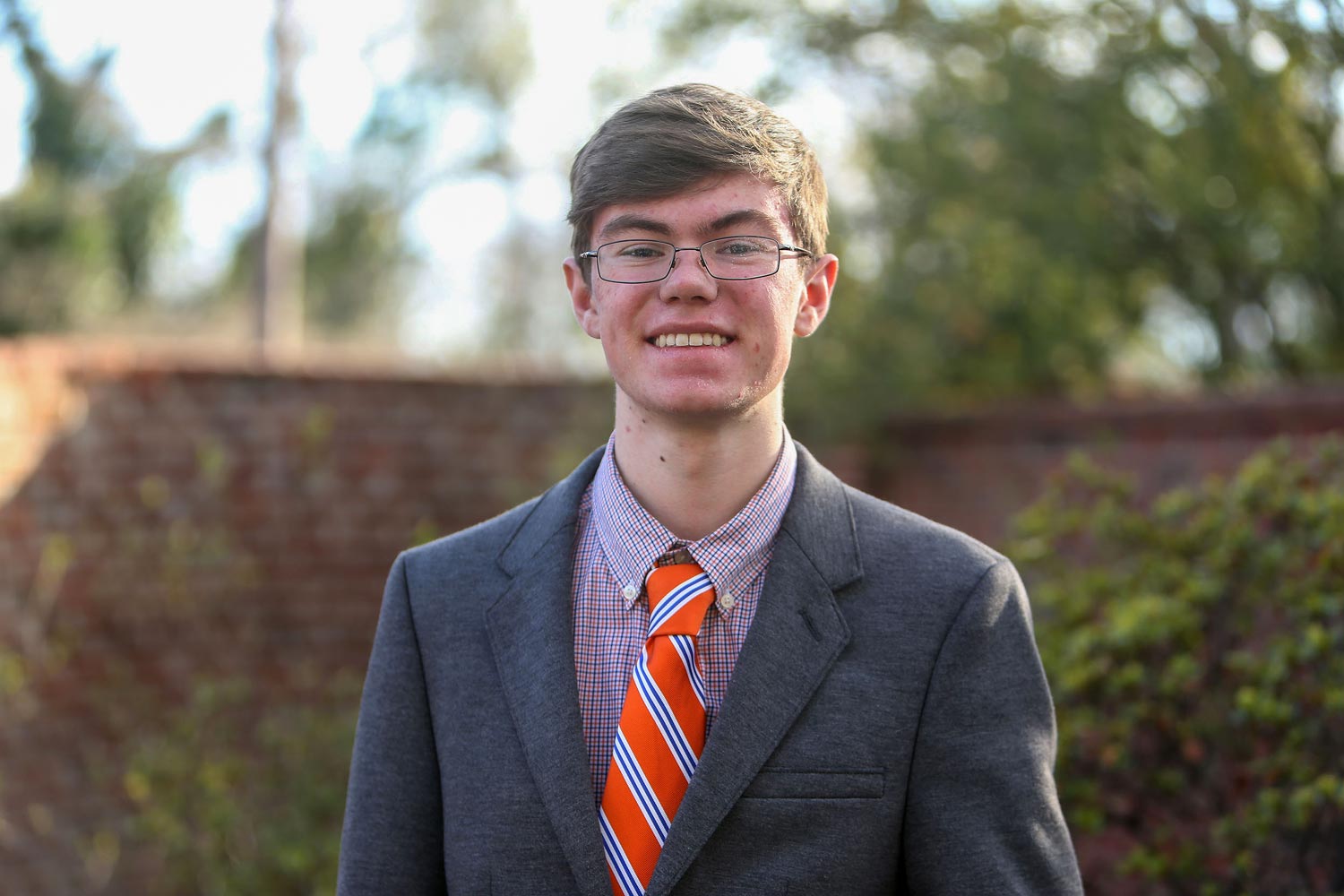 Though he will graduate at a much younger age than most students even enter the University, Henry Muhlbauer found the place where he belongs at UVA. (Photo by Richard Dizon, University Communications)

Age is not important to Henry Muhlbauer; he is more interested in what people can do.

What Henry Muhlbauer will soon do is to earn a bachelor’s degree in electrical and computer engineering from the University of Virginia at the age of 15, the youngest graduate to ever come out of engineering.

Muhlbauer – who also has minors in physics, computer science and applied mathematics – taught himself to read at age 2, mastered calculus at age 9, learned organic chemistry from a textbook and started college courses at UVA at the age of 10. A slender lad with brown eyes and a thick thatch of hair that he usually keeps in place with a baseball cap, he rejects the notion that he is smarter than other people.

“I am just a faster learner,” he said.

His adviser, Robert Weikle, an electrical and computer engineering professor in the School of Engineering and Applied Science, thinks it is more than that.

“He is also a patient learner and has shown an insight into technical concepts that is unusually mature for someone his age,” Weikle said. “He asks thoughtful questions, generates original solutions to problems, and is able to teach himself – an ability that I believe he developed early on as he was trying to satisfy his intellectual curiosity and meet a need that wasn’t being addressed by the public schools.”

His parents encouraged him without directing him, just as they have with his two siblings.

“I’m not one of those dads who wants my kids to do what I did,” said Tom Muhlbauer, who retired from the U.S. Air Force as a lieutenant colonel and now works as an engineer for the Defense Intelligence Agency in Charlottesville. “Neither my wife nor I are like that. We really don’t have an opinion on what they do for a living as long as they grow up to pay their bills, be independent and become contributing, law-abiding and responsible members of society. We want them to use their God-given talents to make the world a better place to live and be.”

“We’ve just tried to find him a place where he can learn what he wanted to learn,” said Kathleen Muhlbauer, who manages the family’s Jolly Folly Farm in Earlysville. “We’ve never pushed him to learn anything, just provided whatever he needed and let him decide for himself.”

Kathleen Muhlbauer said her son was initially interested in chemistry and biology, but the Engineering School was the most welcoming and open-minded toward Henry, and it fit well with his needs.

“I really enjoy the hands-on experience,” Henry said. “In the Fundamentals courses at UVA, they really let you get hands-on designing circuits. At the end of the semester you actually get to build and design a printed circuit board and solder components to it to make it work.”

Muhlbauer enjoys the process of designing things, thinking out what is needed, satisfying all the requirements and putting it together into something that works.

“Henry loves learning, building, fabricating, theorizing and it’s neat to see your kid find their place in the world,” Kathleen Muhlbauer said. “It doesn’t matter if your kids’ passion is programming or farming or drawing. All we ever wanted for any of our kids is to love God, work hard at whatever they do, whether it’s completing homework or putting away laundry, and to eventually find something that will help others in some way and that they can also be passionate about their choice and do it with gusto.”

Muhlbauer likes being able to collect knowledge and then apply it to real-world problem-solving situations.

“This past month I repaired the power supply in our camper,” he said. “It had gone bad and I went in there with a multimeter and figured out one of the capacitors was blown. I got some capacitors and soldered them back in, and it worked.”

Muhlbauer said he is pleased with his decision to come to UVA, though it was the logical choice because it was close to his home. He still must balance his farm work with his schoolwork and help take care of his grandmother, who lives with the family.

Muhlbauer noted that UVA has been accommodating to him and his circumstances. He started his college career as a part-time student in the School of Continuing and Professional Studies for two years, enrolling at the age of 10, the youngest ever admitted to the school, before enrolling full-time in the Engineering School in 2014.

“The fall of 2014 was the first time I took 15 credits,” he said. “In general, everyone I have met has been very helpful and very kind.”

“He was an attentive and confident student who came to class well-prepared and was not shy about asking questions,” Weikle said. “His score in the class was among the top five out of 60 second-year college students. Henry was an eager student who would often dig deeper into the course material than required and would naturally try to connect it with other things he was learning. This is the approach and attitude we all hope for, but do not always see, from our students.”

Kathleen Muhlbauer said after his first day in Weikle’s class, Henry said, “This is where I belong.”

Part of his belonging is how he fits in with the other students, according to Weikle.

“Teaching Henry was a true pleasure, but one of the most remarkable aspects of this experience was watching him interact with the other students in the class,” Weikle said. “They immediately recognized that, intellectually, he was their peer.

“However, they also were genuinely interested in getting to know him and accepted him as a fellow student. I observed that they would engage in discussions with him before and after lecture – often about activities he was involved with outside of class. The takeaway for me was that Henry was clearly in a place he belonged, that he connected with college-level students, and he not only enjoyed, but also welcomed the challenge of college-level work.”

Henry Muhlbauer does not feel out of place among his older peers.

“Pretty much everybody treats me the same, just shorter,” he said.

Henry Muhlbauer is an ordinary college student: staying up late working on projects, chatting on his smartphone with friends, attending Alumni Hall bingo and going to football and basketball games. He is however, still reliant on others for transportation.

“Sometimes I feel I’m missing out on the some of the social aspect of college by living at home, although I would also be bored out of my mind if I were in high school, so I’m really glad this is where I am,” he said.

Muhlbauer is graduating but not moving. He has been accepted as a Ph.D. candidate at UVA, performing research with assistant electrical engineering professor Steven M. Bowers.

“I think it will be really nice because I already know a lot of professors here,” he said. “And I know quite a few of the students who are going to be grad students here. So I guess it will be a lot more familiar than going to Massachusetts Institute of Technology or California Institute of Technology or somewhere like that. I have also worked with the professor I am working with for grad school before. So I know how his group works and I know the other grad students who are in his group.”

Bowers first encountered Muhlbauer in his third year and said the student was fully capable of tackling the challenges of the advanced courses.

“What sets him apart is not the quickness that he learns concepts in isolation, but how quickly he is able to connect concepts he is currently learning to those that he learned in the past, either from the same course or to other related concepts,” Bowers said. “This ability to quickly make connections between different things he has learned allows him to identify when there is an incongruency in his understanding, and question either himself or whomever he is learning from.”

Muhlbauer is looking forward to being able to drive himself to school next year. On those drives, he can think about his future.

“I hope that eventually I will be doing research,” he said. “I really enjoy doing research and finding out new things about engineering, physics and how things work. I’m not looking very far ahead right now, but hopefully as I move through my Ph.D., I will get a better idea of what I want to do. The Ph.D. will take four to five years, so I will be 19 or 20.

“While at UVA, I realized there are a lot of ways you can impact the world for better,” Muhlbauer said. “A lot of people think that electrical engineers just end up working R&D for some company or another and don’t end up making much of an impact, but there are many ways to do impactful work if you look for them.”

How a Single Email Changed a Life END_OF_DOCUMENT_TOKEN_TO_BE_REPLACED

Fall Is in the Air on Grounds END_OF_DOCUMENT_TOKEN_TO_BE_REPLACED

At UVA, There Is a Club for Everyone END_OF_DOCUMENT_TOKEN_TO_BE_REPLACED