Class of 2018: Joe Charlet Ponders His Path From Orphan to Future Attorney 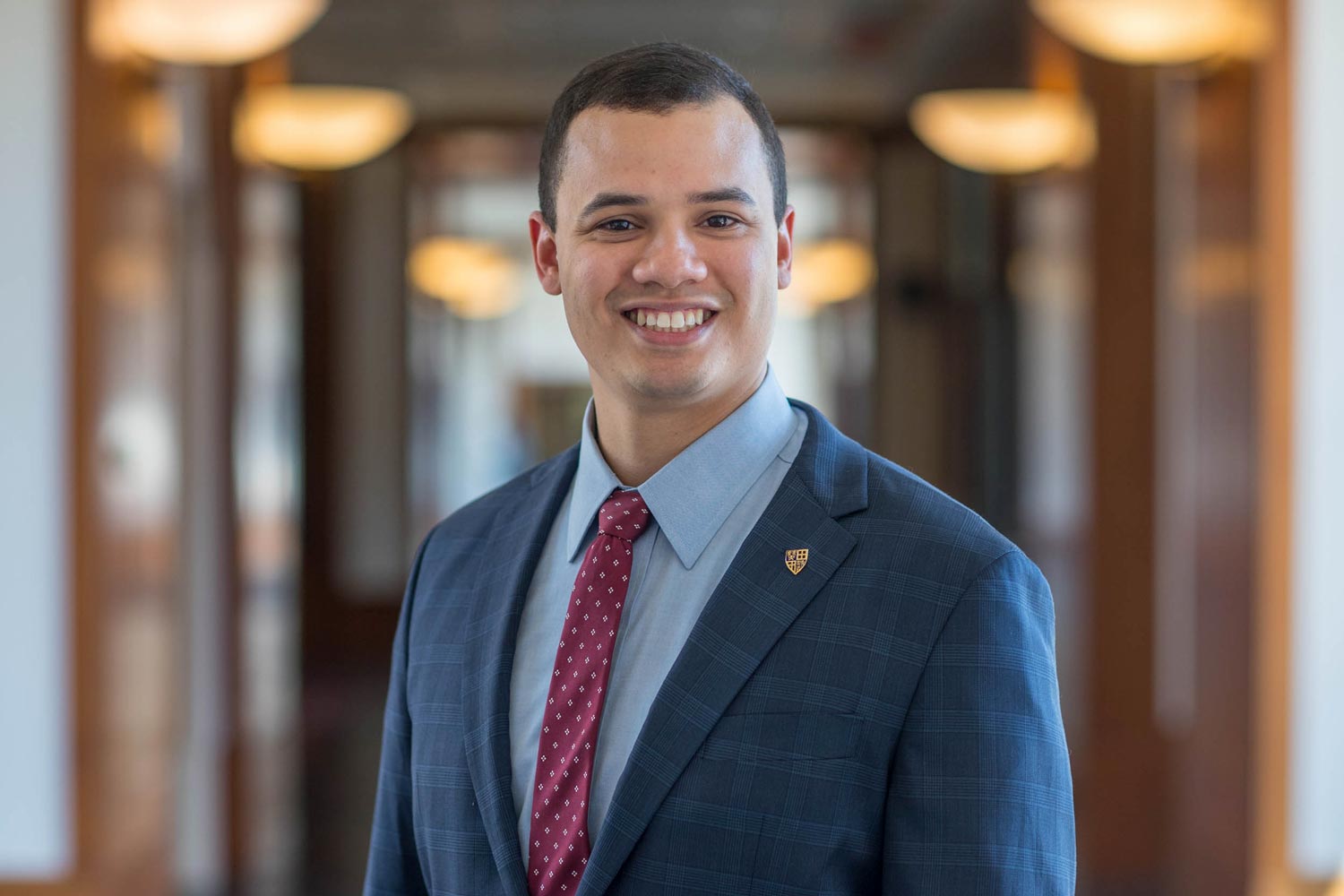 Despite the adversity in his life, Joe Charlet seized control of his affairs at age 16 and has navigated his way to a law degree from UVA. (Photo by Sanjay Suchak, University Communications)

Joe Charlet is set to graduate from the University of Virginia’s School of Law on May 20, and he has been thinking a lot about class.

Not the courses held in the rooms at the Law School, although he has put plenty of time and effort into those, but rather the distinctions that decide who rises and who stays put in this country – the factors that determine one’s lot in life.

Charlet is African-American, gay and was orphaned as a child.

Things could have turned out much differently for him, he said. Now he is earning a J.D. from one of the nation’s most prestigious law schools.

“I was given up at birth by my biological mother and adopted into an all-white family to be raised in an all-white place,” Charlet wrote for the Virginia Law Weekly in January, in a column on class and social categorizations. “I was later effectively orphaned again as a young teen and emancipated myself out of foster care. I am also gay.

“Both in spite of and because of all this hardship, I actually got a full scholarship to attend a private boarding school for my last two years of high school and then I went to Yale on 100 percent financial aid for college. Now I am here at UVA Law, yet another elite institution.”

At the Law School, Charlet has distinguished himself through his many involvements.

He was a managing editor of production for the Virginia Journal of International Law, social chair for the Lambda Law Alliance, an Extramural and Black Law Students Association moot court competitor, vice president of voter protection for the Virginia Law Democrats (and a poll watcher), outreach coordinator for the Virginia Environmental Law Forum, a writer for the Libel Show and founder of the Pan-Affinity Group Softball Team, which he co-captained.

In the classroom, he was a member of the Environmental and Regulatory Law Clinic and Appellate Litigation Clinic, in which he and his student partners handled real cases before the courts. (In March, Charlet and classmate Megan Keenan argued an employment discrimination case they briefed before a panel of the Fourth U.S. Circuit Court of Appeals.)

He grew up on the island of Cape Hatteras, North Carolina and was adopted by the Charlet family. His adoptive mother died when he was 11.

“My adoptive father wasn’t necessarily in the best situation to raise someone,” Charlet said. “So social services took me out of the house, and I was in foster care.”

He was moved, but because of the often short-term nature of fostering, by the time he was a teenager, he didn’t want to keep moving. Dare County encompasses a series of islands and part of mainland North Carolina, so any change was potentially drastic.

“It would mean remaking your entire life, which adds more instability to an unstable life already,” he said.

At the time, he thought he might want to become a doctor. He needed to continue to get good grades.

“I didn’t want my school life and class schedule to be further affected by forces outside of my control,” he said.

He decided to take on the daunting task of navigating a bureaucratic legal process. At 16, he pleaded before a judge for the right to have legal control over his life.

The experience planted a seed of interest “in the back of my mind” about studying law, he said.

At Yale University, Charlet pursued a bachelor’s degree in classical civilization, focusing his research on the role of women, the military and the poor in antiquity. In addition to becoming a more analytical thinker regarding texts and their biases, he interned during his freshman summer with U.S. Sen. Elizabeth Dole, gaining new insights into federal government and Washington, D.C.

It was during that summer that he had another moment to pause and think about class and privilege. He hadn’t planned properly for his expenses, and when the fellowship housing ran out, he was temporarily homeless and had to beg for money.

He thought about why he did relatively well soliciting, and why others didn’t. Was it his clean-cut look? His lighter skin? Perhaps the Yale T-shirt he wore?

With that experience, and the subsequent opportunity to take a pair of law classes at Yale, the seed of interest in law germinated. He wanted to become a lawyer to find ways to make the law more equitable, utilizing his own unique perspective.

After graduation, he worked as a communications and web specialist at Yale for several years before applying to law schools. He chose UVA for its ties to law firms, the government and nonprofits in Washington, but mostly for its community.

“I was looking for a law school that provided what I had found in college – a socially intellectual community where my peers were excited about sharing what they were learning, but also excited to share any of their varied interests beyond the law,” he said. “I like communities that invest in each other as whole people.”

During his time at UVA, Charlet had yet another experience that made him think about privilege. An insect bit him in Tanzania during a January 2017 service trip with the Black Law Students Association. The group was volunteering at the Women’s Legal Aid Centre, where the students worked on various projects. The bite became infected.

“The issue was not from the bite itself, but most likely from the water used for showering,” he said.

After his return to the U.S., the wound grew worse, and Charlet received treatment at the UVA Medical Center. Doctors told him that if they couldn’t get the infection under control immediately, there could be a cascade of negative outcomes, potentially leading to amputation.

But with antibiotics and two months’ more bed rest than he would have preferred, he healed.

“The prospect of amputation was obviously anxiety-inducing for the week or so when it seemed like a very real possibility,” he said. “I was lucky enough to finally have meaningful health insurance after a very financially unstable teenage and young adult life, which not everyone in Tanzania, or even the U.S., has.”

Charlet will join the law firm Hogan Lovells in D.C. after graduation, where he will rotate through the various practice groups. He hopes to be a litigator, and he will test his interest in administrative law against other practice areas.

As he begins his career as a lawyer, he realizes where hard work has intersected with a few helpful breaks – and counts himself among the fortunate.

How a Single Email Changed a Life END_OF_DOCUMENT_TOKEN_TO_BE_REPLACED

Fall Is in the Air on Grounds END_OF_DOCUMENT_TOKEN_TO_BE_REPLACED

At UVA, There Is a Club for Everyone END_OF_DOCUMENT_TOKEN_TO_BE_REPLACED