Class of 2019: As a ‘CODA,’ Kim Built Bridges for UVA’s Deaf Community 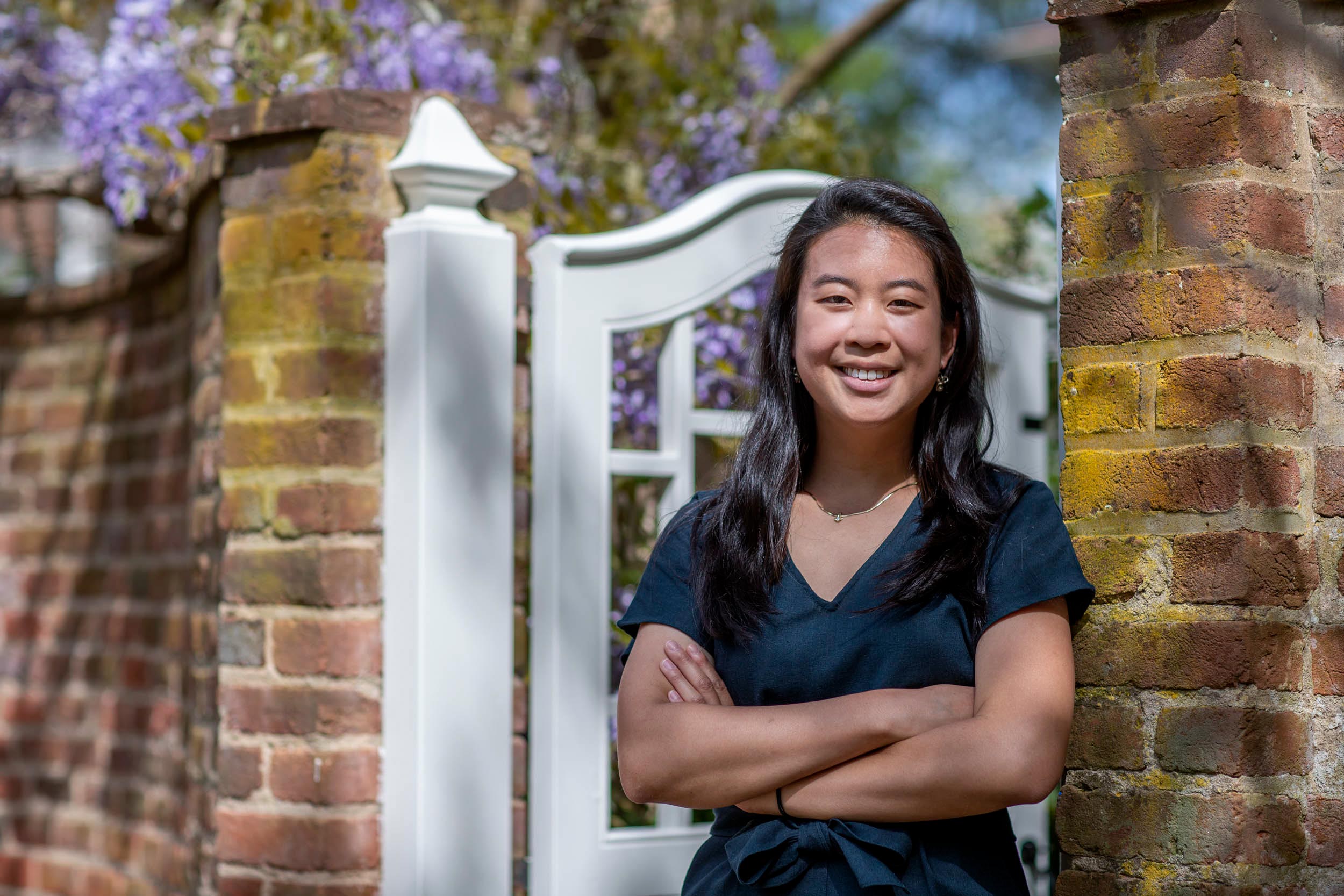 Christina Kim was born in the United States to parents who immigrated from South Korea, but neither English nor Korean is her first language. As a child, the first language Kim learned was American Sign Language, or ASL.

Though Kim has typical hearing and speech, her parents are deaf. Kim is a “CODA” – a  child of deaf adults – and that identity has shaped her life. The soon-to-graduate University of Virginia biomedical engineering student has sought opportunities during her four years on Grounds to make life its best for the deaf community and for other CODAs.

“At an early age, I found myself at an interface between cultures,” Kim said. “I had a Korean-American identity, and learned to navigate society in English, while my parents were Koreans in the United States, and also deaf. At home I communicated with them in ASL, while my older sister and I also communicated in English.”

Kim said her parents are self-reliant, facing challenges full-on – and they have raised their daughters to do the same. They encouraged Christina and her sister, Brianna, to experience life fully, to excel in school, to study abroad, and to participate in various extracurricular activities.

“We never missed out on any opportunities,” said Kim, who in high school spent six weeks in South Korea through the National Security Language Initiative for Youth. “I think I gained a lot by fusing cultures. I developed a sense of responsibility, that there are bigger things than just me.”

At UVA, Kim found a welcoming and encouraging community that she said provided “unconditional support.” She sought ways to develop meaningful connections between others.

In the summer of 2016, she served as an ASL interpreter in STEM settings during a research experience at James Madison University, and, while there, conducted linguistic research on ASL in educational settings. 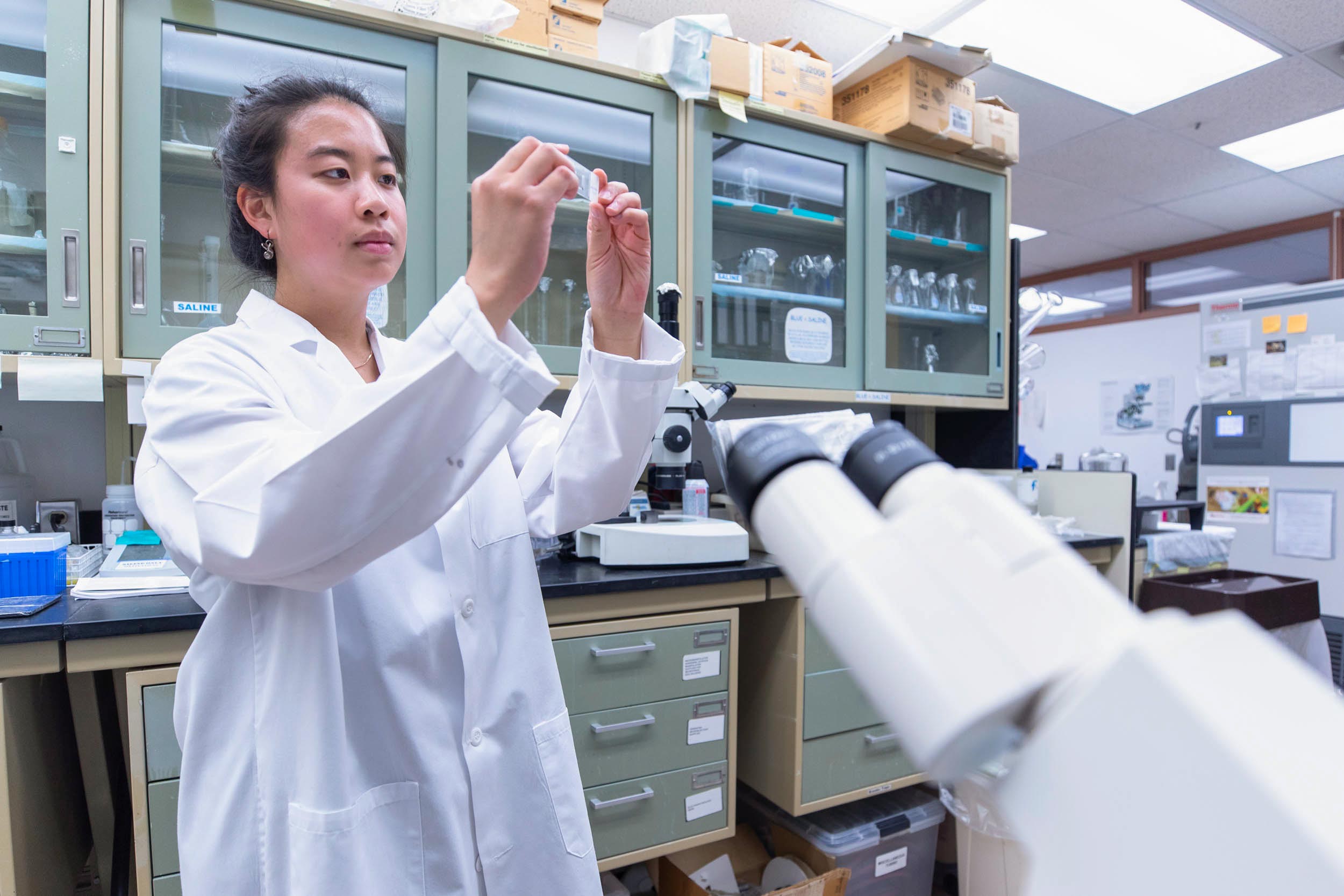 Christina Kim has conducted hearing research in the lab of neuroscientist Jeff Corwin.

She also researches how to better accommodate deaf students in the STEM fields. Recently she presented her work at a science and technology consortium at the National Academies of Sciences, Engineering and Medicine in Washington.

She is a Virginia-licensed ASL interpreter, and has interpreted in several settings, including public events like a Charlottesville City Council meeting and a UVA convocation.

“Christina has had a huge positive impact on our ASL program and on the University during her time here,” said Gregory Propp, director of the ASL program at UVA, and himself a CODA. “I’m so proud of all she has achieved. I have benefited so much professionally and personally from her time here and will forever be thankful for all she’s contributed to our program.”

“How she found time to do all the things she has done for us and with us – which, as an engineering student, she didn’t have to do – is mind-boggling, as is her level of intelligence, maturity and organization.”

Last year Kim won a CODA International Scholarship for an essay she wrote on her identity and activism in the ASL community.

Additionally, for the last two years she has worked as a student researcher in the lab of Jeff Corwin, a neuroscience professor who studies sensory cell regeneration in the inner ear, seeking ways to help humans regain hearing cell function after the death of these cells.

“I wanted an opportunity to better understand how hearing works, and the mechanisms of hearing loss,” Kim said of her decision to join the lab.

In 2017, she and her graduate mentor, Mark Rudolf, an M.D. and Ph.D. candidate, earned a Double Hoo Research Award in support of the work.

“Christina has brought to my lab her unique perspective on deaf culture and her engineering skills,” Corwin said. “She conscientiously put in the time needed to become skilled at challenging micro-dissections of the inner ear, and she designed, evaluated and optimized algorithms that have allowed us to make several novel discoveries.”

Along the way, Kim has recruited biomedical engineering students to the lab to further the research. Their engineering capstone project studies non-sensory stem cells that characterize hair cell regeneration in the ear.

“Christina has made a big difference to our research,” Corwin said. “We have been delighted to have the opportunity to work with her and will miss her tremendously after she graduates.”

Last summer, Kim earned a fellowship through the engineering school's Policy Internship Program to the National Institute of Allergy and Infectious Diseases. There, she researched large international research programs, as well as the infectious disease infrastructure of North Korea.

After graduation in May, Kim will head to Wisconsin for a position with the health care software company Epic Systems. She said she is considering grad school eventually, and perhaps an advocacy career in public policy.

“I just want to help people,” she said. “It’s why I became an engineer. And there are many ways to do that – through technology and understanding, from both societal and technical contexts. I’m not in a hurry career-wise; I’m making memories to cherish.”

What’s the True Story of Brooks Hall? This Architectural Historian Has the Answer END_OF_DOCUMENT_TOKEN_TO_BE_REPLACED

At UVA, There Is a Club for Everyone END_OF_DOCUMENT_TOKEN_TO_BE_REPLACED