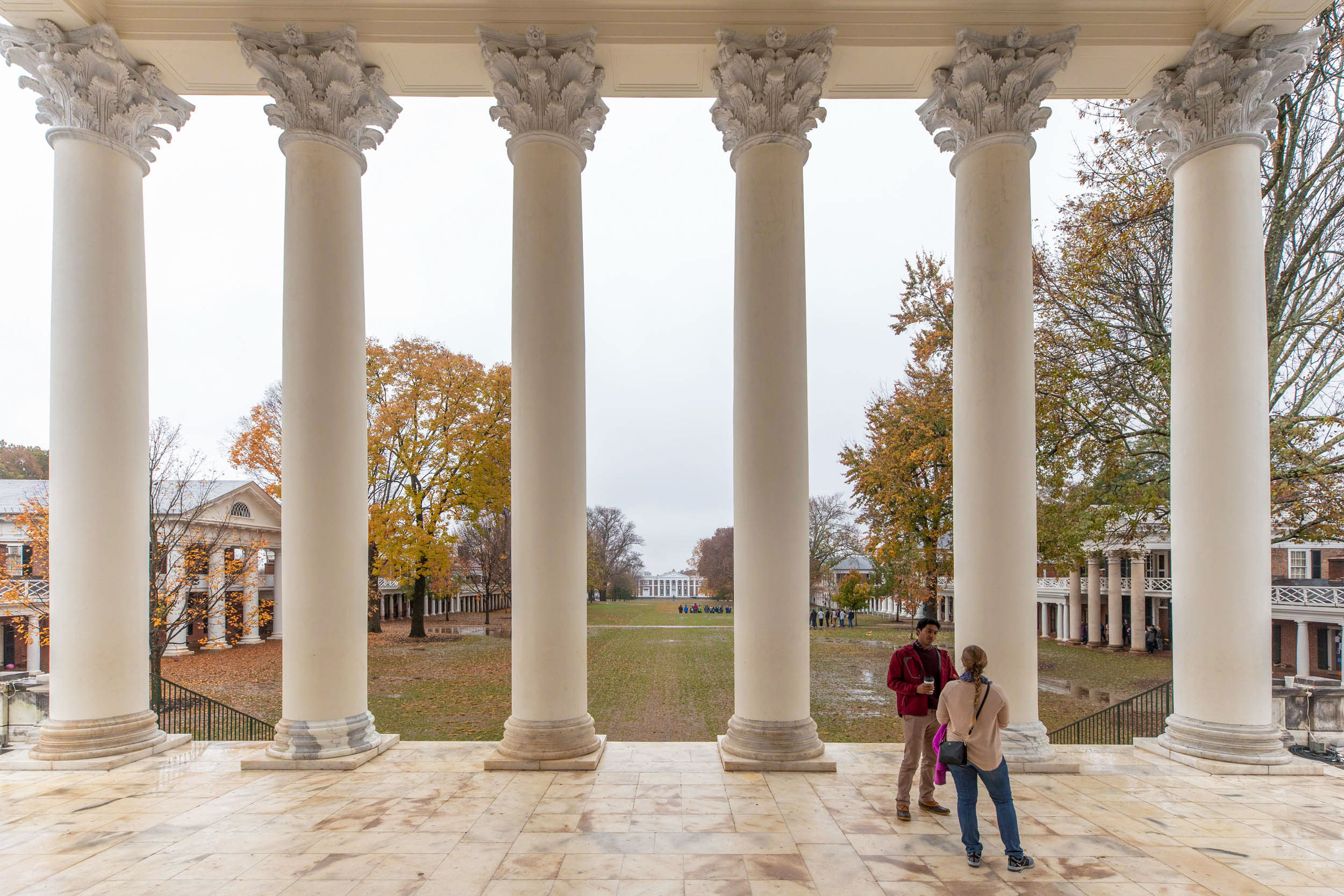 Ashwanth Samuel has racked up an impressive list of achievements during his four years at the University of Virginia, but you wouldn’t know it unless you asked, because that’s just the kind of guy Samuel is; humble and understated. Let the record state that he earned a bachelor’s degree in statistics, with a minor in history, in three years, then returned to Grounds in August to pursue a Master of Science in data science.

He’s also a classically trained violinist, was named the Ernest H. Ern Distinguished Student, Emerging Greek Leader of the Year, and is a member of the dean’s list. And he was a child figure skater. 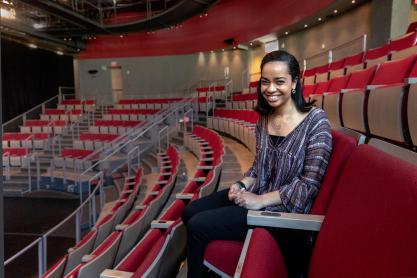 One of his regular refrains is “Oh my goodness!,” a selfless, simple rejoinder that hints at Samuel’s upbringing in Olathe, Kansas.

Samuel graduates Sunday, walking the Lawn for the second time in as many years. We first got to know him in August, right after he moved into his Lawn room. After a quick, 10-minute conversation for a different story, we thought, “This guy seems pretty interesting. How about we learn more about his time at UVA?

Here are some scenes from his four years on Grounds.

So Much Leadership and Scholarship

Samuel arrived at UVA in 2015 as a first-year student and hit the ground running. He became a probational guide, or “probie,” with the University Guide Service, a highly esteemed and competitive group of students who give tours to prospective students and members of the public year-round.

In his second semester, he decided he wanted to pursue some independent research, and secured a generous award from the Center for Global Health that sent him to his parents’ native country, India. There, he and two teammates studied the effects of mobile banking on the traditional, male-dominated household structure in rural areas. 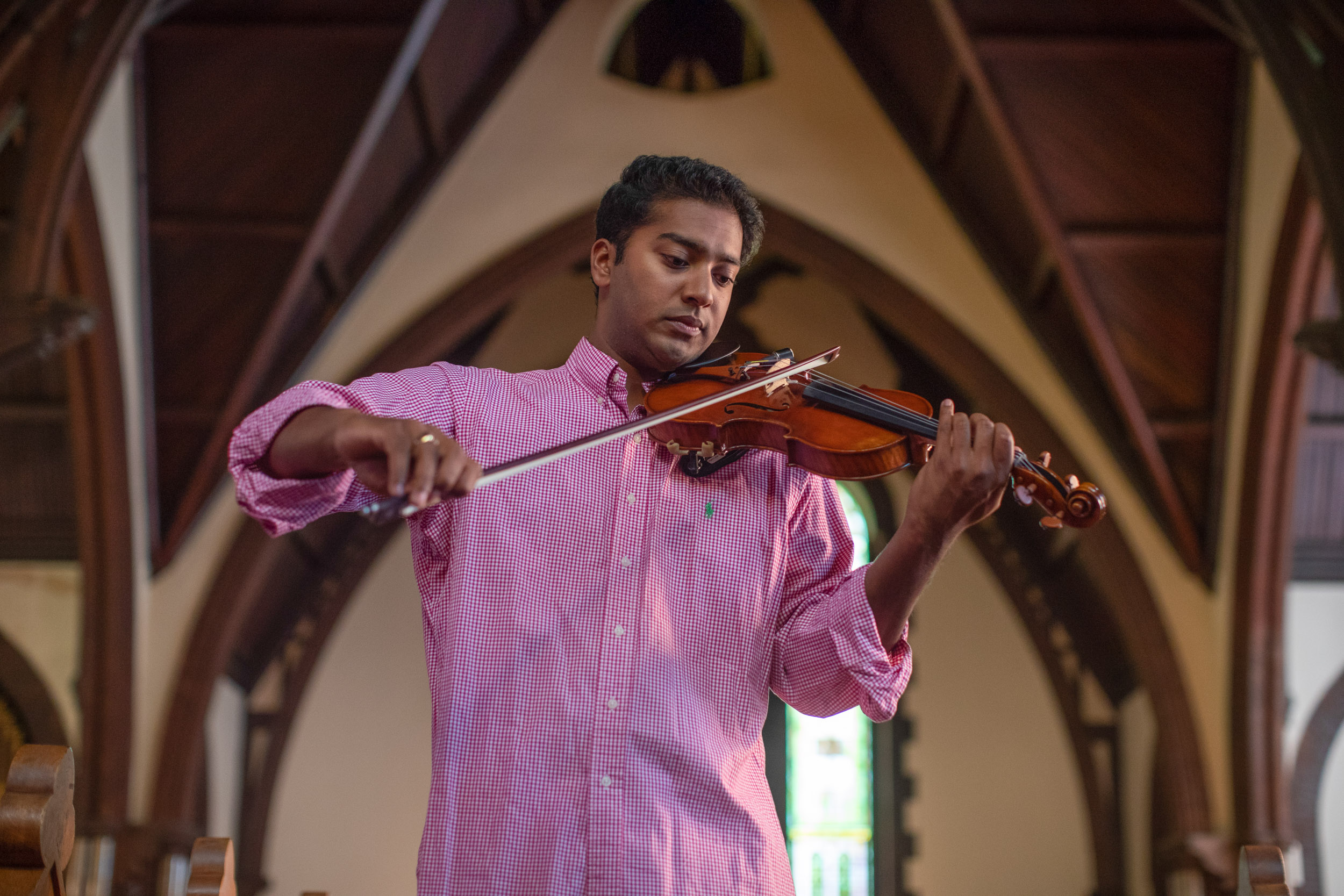 After years of violin lessons and orchestral performances (he began playing when he was a toddler), Samuel decided he was ready to try something new, so he joined UVA’s Radio Music Society, a light-hearted string ensemble that performs pop song arrangements like Toto’s “Africa,” Sia’s “Chandelier” and Beyoncé’s “Halo.”

Samuel, who graduated first in his class at Olathe Northwest High School, is also a Jefferson Scholar, a highly selective, full-scholarship award program that brings some of the world’s most exceptional high school seniors to UVA. (Next fall, 38 scholars will matriculate to UVA. More than 2,000 students were nominated.)

“Over the last four years, my fellow Jefferson Scholars have been a really solid group of people. Some of my closest friends are Jefferson Scholars,” Samuel said. “The community has been really beneficial.” And because he is enrolled in the College of Arts & Sciences, Samuel was also named an Echols Scholar, allowing him more freedom to chart his own academic pursuits.

A Guide to the University

The most rewarding tour Samuel gave as a University Guide was on a rainy Friday afternoon during his second year. He and Mary Boyd Crosier, a fellow Jefferson Scholar and chair of the University Guide Service, waited for their tour group on the University Avenue side of the Rotunda, huddled under an overhang to stay dry. A busload of high schoolers arrived 90 minutes late due to traffic, so things were off to a bumpy start. 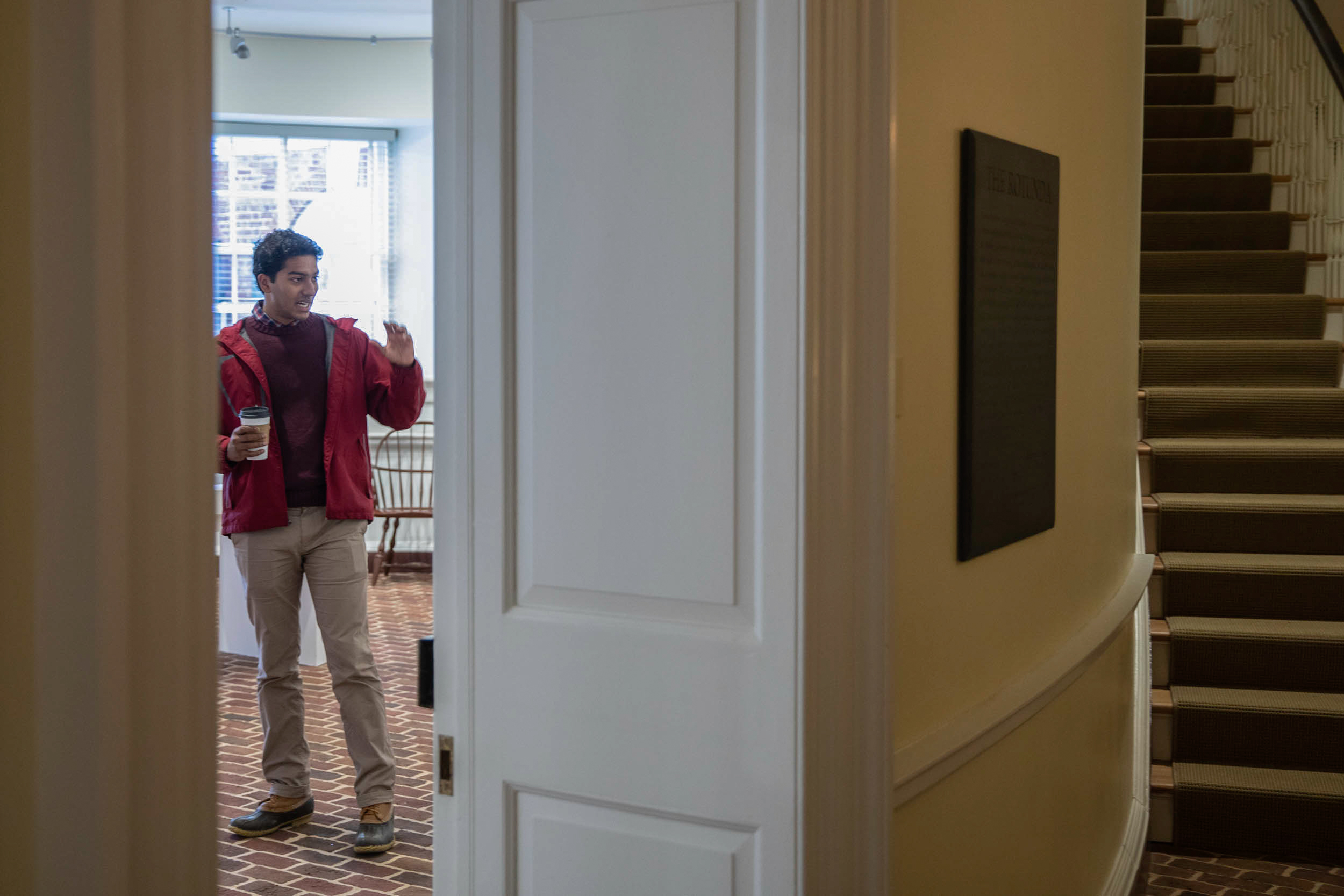 Samuel begins a tour in the Rotunda’s Lower East Oval Room, home to a museum exhibit that highlights the Thomas Jefferson-era chemical hearth, which was part of an early science classroom.

But to his great surprise, that tour ended up lasting three hours. “It was definitely the most fulfilling tour, because these kids asked such great questions and most of the buildings were open and mostly empty because it was a Friday,” he said. “I felt like every single one of those students was actually listening to what we were saying and they were so intrigued and it was just nice to introduce UVA to a group of students who were about to cancel the trip and ended up coming in the end.”

This was an admissions tour, but Samuel said it lasted so long because the students also had loads of questions about the history of UVA. He said that was really unusual.

“On admissions tours, usually the guides give their talk and then everyone stands awkwardly around trying to get their parents not to ask questions,” he said.

A good bit of Samuel’s final year at UVA has been devoted to his Data Science Institute capstone project, which is funded by the Mellon Foundation. The Landscape Studies Initiative, housed in UVA’s School of Architecture, and the UVA Data Science Institute were tasked with building a comprehensive, relational database around a seminal textbook in the field of landscape architecture called “Landscape Design, A Cultural and Architectural History,” by Elizabeth Barlow Rogers.

“The idea here for us is to digitize this entire textbook and start creating a relational database that becomes easily usable by students, professors and history enthusiasts alike,” Samuel said. 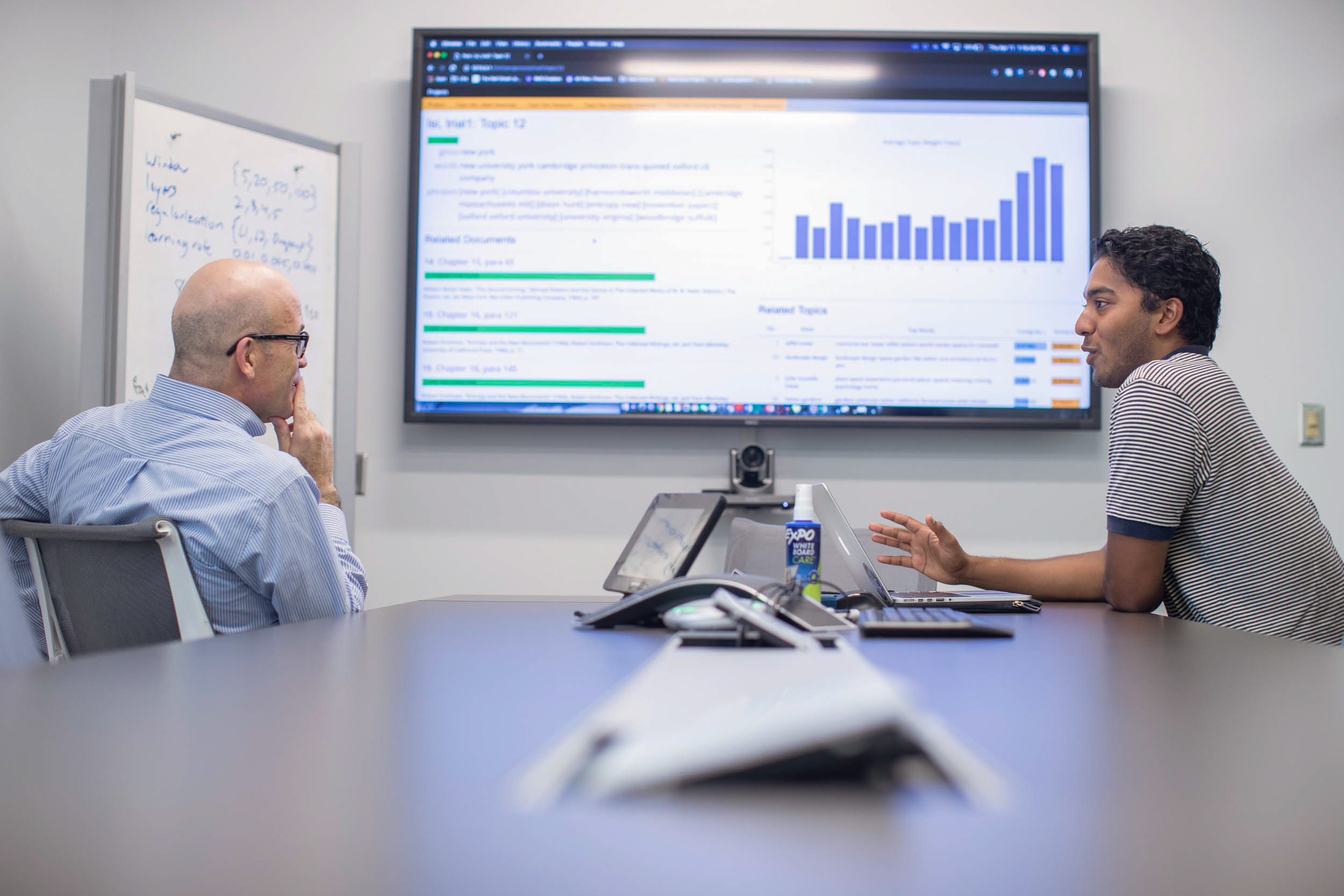 Samuel discusses his capstone project this spring with Rafael Alvarado, the program director of the Data Science Institute.

Users can go into a general database, for example, and search for “France,” by using a simple control-F function and every mention of France would come up. “But what if you were able to search France, and every connection to France from the textbook came up? And then maybe every instance of Paris came up. And from Paris, you could jump to Versailles, and then you could see who built Versailles,” Samuel said. The possibilities are limitless.

A Win for the Ages

Samuel grew up going to basketball games at the University of Kansas and loves college basketball. “Not to make it all about me, but I was a little worried about coming here and watching UVA basketball because it’s so slow, and KU basketball is just the opposite of that. It’s ‘run-and-gun’ basketball and very flashy and exciting and UVA is walking the ball up the court.

“But by the end of my first year, I loved UVA basketball; watching guys like Malcolm Brogdon and Isaiah Wilkins was really cool,” he said.

Samuel has a surprising personal connection to the team, too. As an orientation leader in the summer of 2016, Ty Jerome, Jay Huff, Kyle Guy and De’Andre Hunter were all his orientees. One day during lunch, Samuel said they all joined him at his table. “They just hung out with me for the rest of the day. I was surprised, and the rest of my group? They were shell-shocked. Mouths were dropping to the table,” he said. 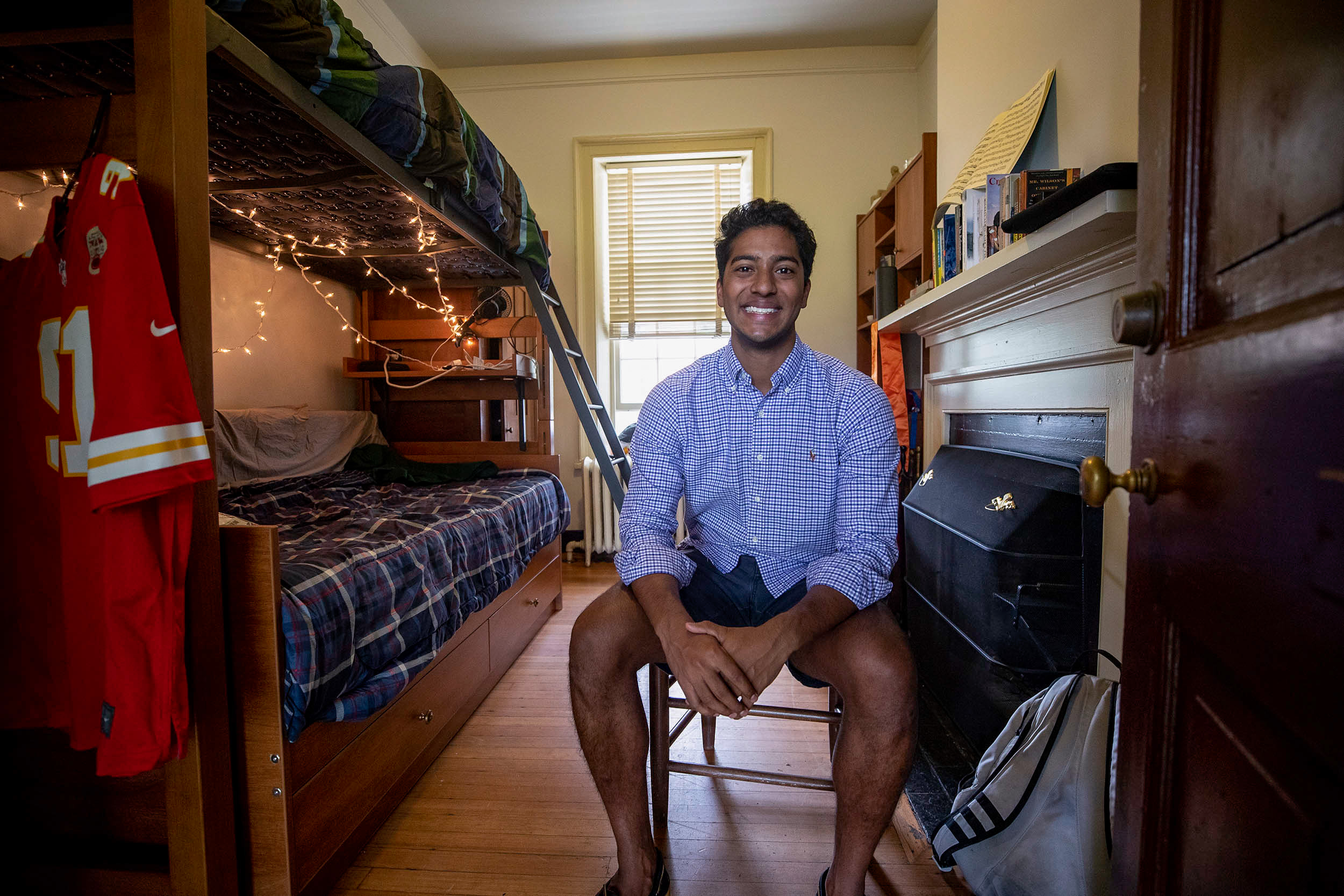 Samuel is pictured last August soon after moving into his West Lawn room on “Bachelors' Row,” a string of small rooms south of Pavilion VII.

“One of my favorite moments at UVA was when I hit a game-winning shot in a meaningless intramural basketball game for my fraternity. All of a sudden, I’m engulfed by two guys, and I believe it was Ty Jerome and De’Andre Hunter, at the Aquatic and Fitness Center, and they are like ‘Let’s go, Ash! That’s our orientation leader!’”

When UVA made it to the finals of this year’s NCAA Tournament, Samuel was beside himself. He and a Lawn neighbor, Matt Gummersbach, began plotting. They went to Bed, Bath and Beyond and found two large sheets in the clearance section, stapled them together, strung them between columns outside their Lawn rooms and rented a projector from Clemons Library to screen the game.

“Before we knew it, it was about 10 minutes to game time and we had 300 people on the Lawn ready to watch this game,” he said.

That wasn’t quite what they were expecting. Samuel and Gummersbach assumed their fraternity brothers and a few fourth-year friends might show up, while lots more people would go to John Paul Jones Arena, where the game also was being shown.

“But the issue was people wanted to run to the Corner right after the game, just in case we won,” Samuel said. “Even at halftime, the crowd grew, because more people said ‘Let’s go to the Lawn so we are closer.” 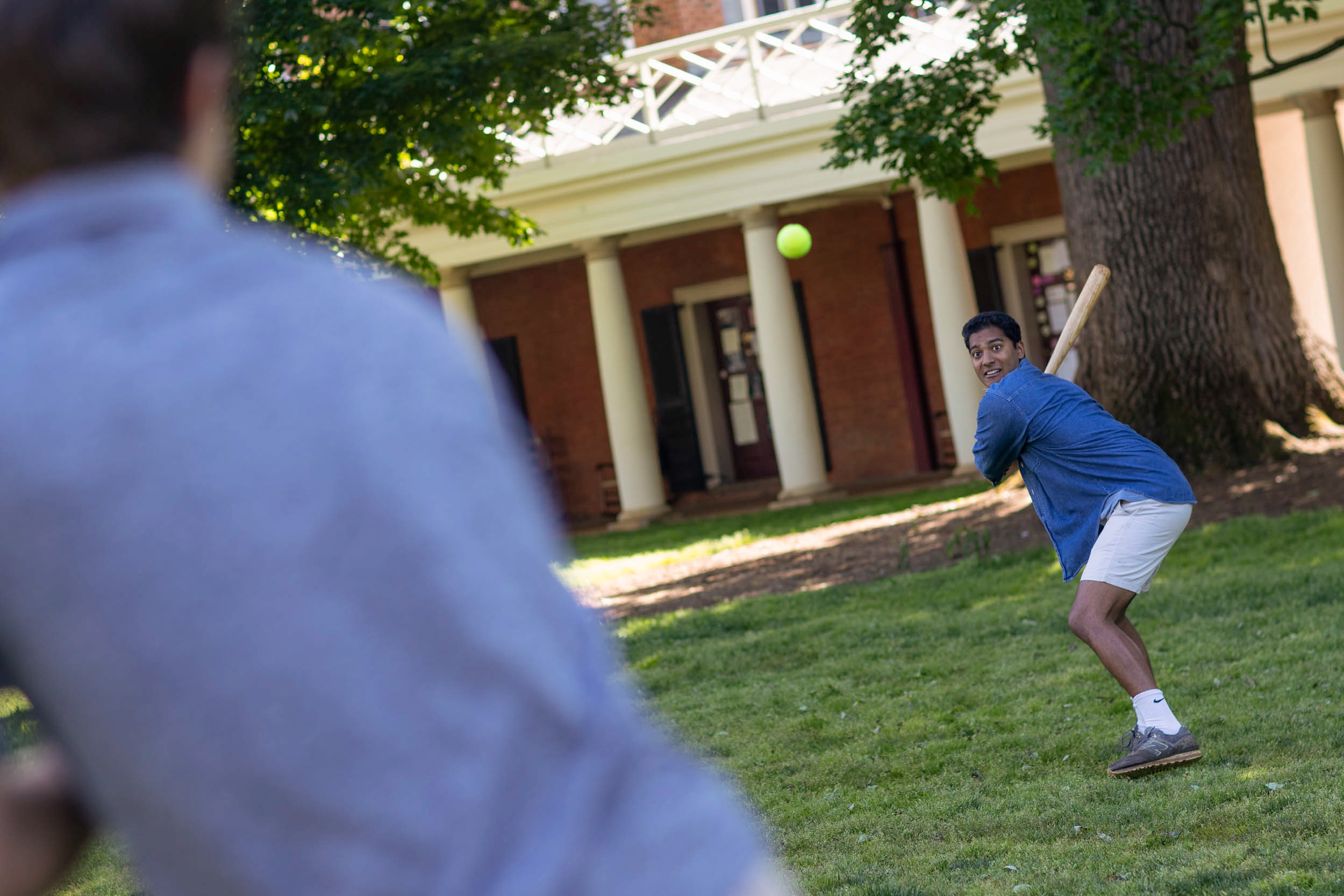 Samuel takes a swing playing “Peachball” on the Lawn. He doesn’t know the origin of the name, but the game is similar to baseball. Players use pizza boxes and College Inn cheese bread boxes for bases.

The last few seconds of the game, the feed was buffering, so Samuel Googled the final score, displayed that on the sheets and everyone went wild. “The next thing I know, I’m sprinting down the Lawn with hundreds of people. You know, once you get to the Corner, there really isn’t anything to do. I think people were so happy to be there with everybody else. That is going to be a day I remember for the rest of my life.”

“He will surely be missed when he graduates from Mr. Jefferson’s University.”

“I think everyone who knows Ashwanth would agree that the first thing that strikes you about him is his smile,” Elzinga said.  “Everyone likes to see a smile. But Ashwanth’s is a real smile, not something pasted on for the occasion. It is a cliché, but the cliché applies: Ashwanth lights up a room.”

He agrees that Samuel is humble. “Then, when you get to know Ashwanth, you learn that he is very smart. I observed this when he took both ‘Economic Principles’ and ‘Antitrust Policy’ with me.

“But then – and here’s the remarkable part – when you get to know Ashwanth well (and this takes time, because he doesn’t brag about himself), you realize that this guy is talented in just about everything: music, student organizations, Greek life, sports, you name it,” Elzinga said. “He will surely be missed when he graduates from Mr. Jefferson’s University.”

Samuel will take many other fond memories with him when he heads to Boston to work as an associate consultant at Bain and Company, a global management consulting firm.

“My first Lawn snowball fight was one of epic proportions. It was the year when Charlottesville experienced monumental amounts of snow, and I distinctly remember someone running around in a Pikachu costume just dumping snow on everyone, friend or stranger.”

“It was my first time experiencing Phi Delta Theta caroling. Every year, Phi Delt treks to every sorority house (and a few Lawn pavilions) to spread holiday cheer. We are quite terrible singers, but I just remember laughing so hard at the audience’s reactions as they listened to us … bring the house down.”

“I led an Alternative Spring Break trip [that] year with my good friend Megan Norris. We were in San Juan, Texas, working with many people seeking asylum near the border. The trip was so educational, but also I don’t think I’ve ever laughed more in my entire life. I was tasked with driving a 12-person van from San Antonio to San Juan, and let me tell you, that was an experience itself.”

“Having my friends chant my name at the Southern Café and Music Hall when I finished soloing on ‘Devil Went Down to Georgia.’” 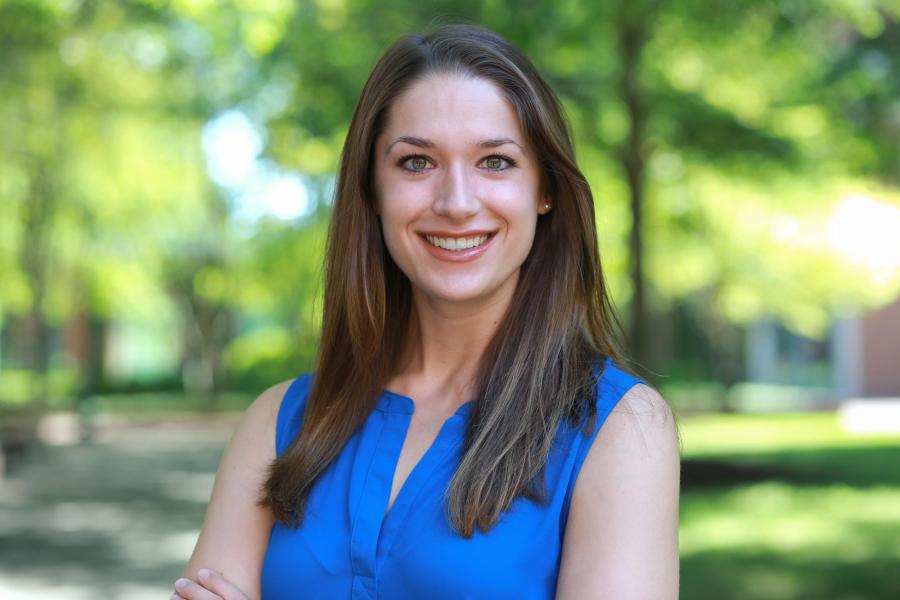 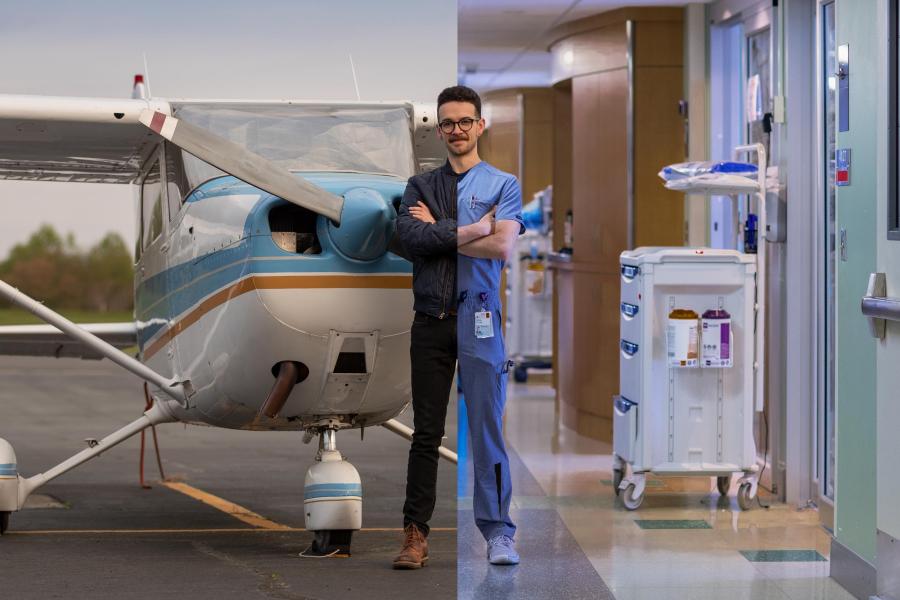 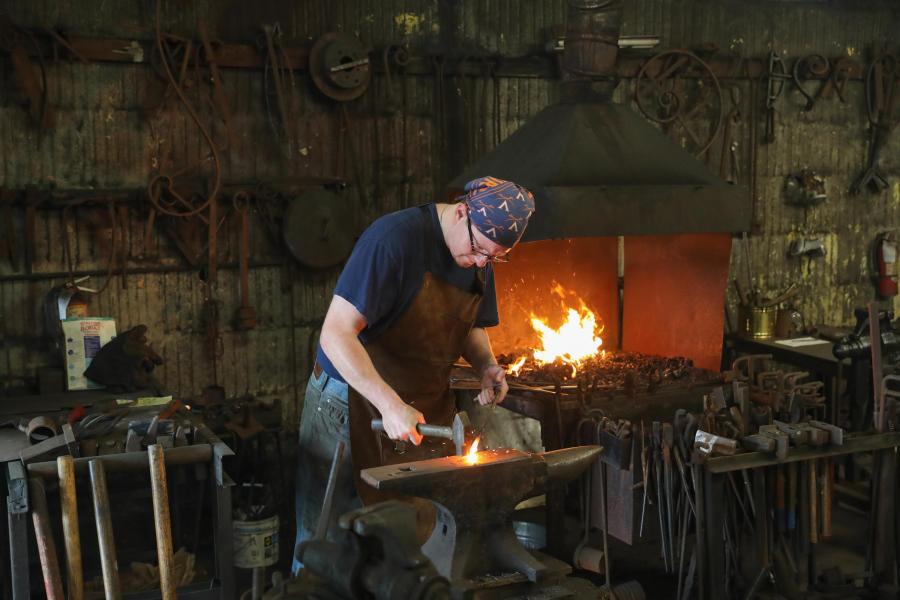