Class of 2019: Student Examines a Stop on the Underground Railroad as a Business Model 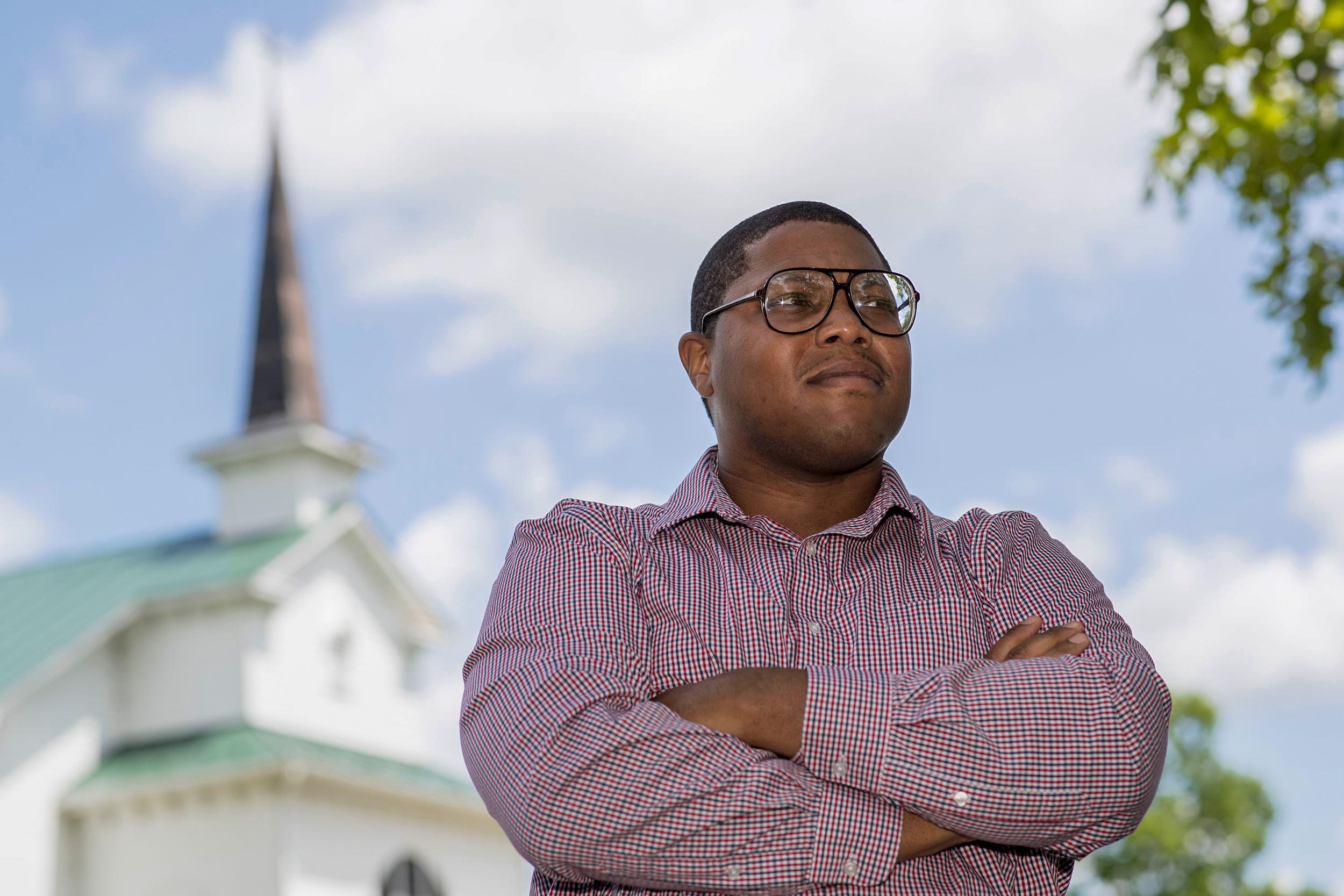 Jackson considers the architectural and business significance of a church that played a role in the Underground Railroad. (Photo by Dan Addison, University Communications)

A church can be a spiritual structure, a physical structure and a piece of local history. Jakiem M. Jackson-Dinnall, who goes by Jackson, explored all three dimensions of a Portsmouth, Virginia, church that once was a way station on the Underground Railroad.

Jackson, of Portsmouth, will graduate Sunday from the University of Virginia’s School of Continuing and Professional Studies with a business concentration in the Bachelor of Interdisciplinary Studies program. His capstone project is a combination of architectural history and business, as he looks at the history and physical structure of Emanuel African Methodist Episcopal Church, built in 1857 by the slaves and free blacks of Portsmouth’s African Methodist Society.

Known as North Street Church until its renaming in 1871, Emanuel was a house of spiritual and physical salvation, Jackson said.

“Enslaved and free African American Methodists built the church by hand, with the administrative assistance of European American Methodists due to laws preventing African Americans from owning property in 1857,” Jackson said. “I discovered that the architecture and the people who built it established it on two poles. Its façade features well-known, mid-19th-century American stylings, with its handmade stained glass set in elongated bricked window bays under semi-circular arches; however, in its era, Emanuel’s interior harbored African American freedom fighters among false walls within the sanctuary. And there was a labyrinth of tunnels beneath it.”

These tunnels brought escaping slaves to the Elizabeth River, where boats waited to take them out of slaveholding territory.

Jackson, 33, is a contract administrator with BAE Systems Ship Repair in Norfolk, estimating and negotiating for repair jobs between $100 and $150 million. He came to the School of Continuing and Professional Studies to pursue a business degree but found this also required humanities courses. He took courses in African art, women of the Italian Renaissance and architectural history, which led him to a greater appreciation of the structures around him and of the Emanuel African Methodist Episcopal Church in particular.

“We were told to choose a subject that meant something to us,” Jackson said. “I did some research on Portsmouth, and I met this church – the Emanuel African Methodist Episcopal Church – and just the history, its involvement with the Underground Railroad, the fact that the people built it themselves with their hands, that was enough for me.”

While he was first drawn to the building because of its architectural history, the more he worked on his project – the more he thought about the church and the people who built it, and why – the more he realized that the work also fit into his larger major of business, and it became his capstone project.

“Economics isn’t just money. It is an exchange amongst people,” Jackson said. “So, we are dealing with people who were essentially brought in as a commodity and then, being human beings, they became their own agents and transacted themselves with their former masters to bargain for their freedom.”

These were complex transactions, on multiple levels. African American Methodists had to bargain with the white Methodist churches to be able to have their own church, because then even freed blacks were not allowed to own property. They bargained with white minister George Bain to administer the church. They had to bargain for the materials not just for the church, but for the surreptitious tunnels and compartments.

“Where could they have gotten the funding for the lumber and the bricks?” Jackson said. “Someone had to see and feel something that these people felt and say, ‘I’m going to have a part in this.’ That is when money becomes more than economics; it is really an exchange between people.

“Once upon a time they bartered. They bartered their pain. George Bain had to empathize with them. He was their first pastor. I would say there is no way he did not know these hiding places were there.”

Bain, the Methodist pastor for both the white and black congregations, owned the brickyard that produced the bricks of which the church is built, while the slaves and freed men fashioned the wood for the columns. The slaves, Jackson said, worked for their masters during the day and then worked for themselves at night.

“Finding out all of this is what got me interested, and then the icing on the cake was its involvement in the Underground Railroad,” Jackson said. “To know that they not only built a beautiful church that really fits with the older federal-style architecture in downtown Portsmouth, so it is stylish for its time, but that it served a deeper purpose than just being superficially beautiful. It was practical, because people used the church to harbor fugitive slaves who were on their way to the North, so it was like saving the soul and the body.”

“We’re giving a lot of attention to tearing things down, but we need to look harder for things that people work together to build up.”

“Emanuel AME Church expresses the ideal of resistance to an oppressive market for human commodities, which strikes at the core of ethical decision-making in business,” Jackson said. “The Underground Railroad became an institution. It is not just one person, but collectives of people, free and unfree, working together to make that happen. They used materials, but the principal thing they exchanged was the idea of ‘I’m free, you should be free,’ or ‘I’m not free and I want to be free.’ There was a bargain for freedom to get these materials for these projects that would also liberate others.”

Julie May, who taught Jackson courses on art history of the Pacific Rim and the history of Western architecture, as well as serving as his academic adviser and the adviser on his capstone project, praised his keen eye for detail.

“He was so insightful and brought that into class and into his work,” she said. “He was eager to get to the deeper meaning of art – and make connections every step of the way.”

May suggested that he expand his project from her architectural history course to be his capstone project for his major.

“He really dug in for that project, into the history, the nature of architecture and theory, the economics/business of the Underground Railroad, and the ways that those associated with the church used it to help others in their journeys out of slavery,” she said. “It is really impressive, and meaningful, work.

“His work was among the best I have had in [the Bachelor of Interdisciplinary Studies program],” she said. “He took criticism thoughtfully and well, with the goal of improving his scholarship. He was a great student, and was always engaging, and ready to take up a challenge, and a joy to work with.”

As Jackson dug into the past, researching the split between white Methodists and the Emanuel AME Church over the slavery issue, he was surprised by the levels of cooperation between the whites and the blacks.

“The humanity, from one man to the next, asserted itself,” he said. “Beneath the money and the status of being a master of an enslaved person, humanity crept in and someone said, ‘I am going to help my fellow man.’ And that surprised me because we’re giving a lot of attention to tearing things down, but we need to look harder for things that people work together to build up.”

He said people tend to get caught up in negativity and forget the good and positive things in life.

“There is so much positivity that even stems from something as ugly as chattel slavery,” he said. “This church, Emanuel, is one of those beautiful things – a beautiful monument and a testament to the people in those times who helped.”

Jackson extends his own positivity to being an education advocate, participating in the Tidewater Education Action for Change Here Inc. and mentoring young men in his community. He plans to pursue a master’s degree in business administration.

“I want to help others who may not have thought of themselves as being critical thinkers,” he said.

Through his explorations of the history of the church, he said he has learned to never lose sight of his humanity.

“My ambition is to live for a living,” Jackson said. “Life for me is about constant improvement through constructive endeavors.”

What’s the True Story of Brooks Hall? This Architectural Historian Has the Answer END_OF_DOCUMENT_TOKEN_TO_BE_REPLACED

At UVA, There Is a Club for Everyone END_OF_DOCUMENT_TOKEN_TO_BE_REPLACED