Class of 2019: UVA Law Student Has Fought for Rights of People of Color, LGBT and Others 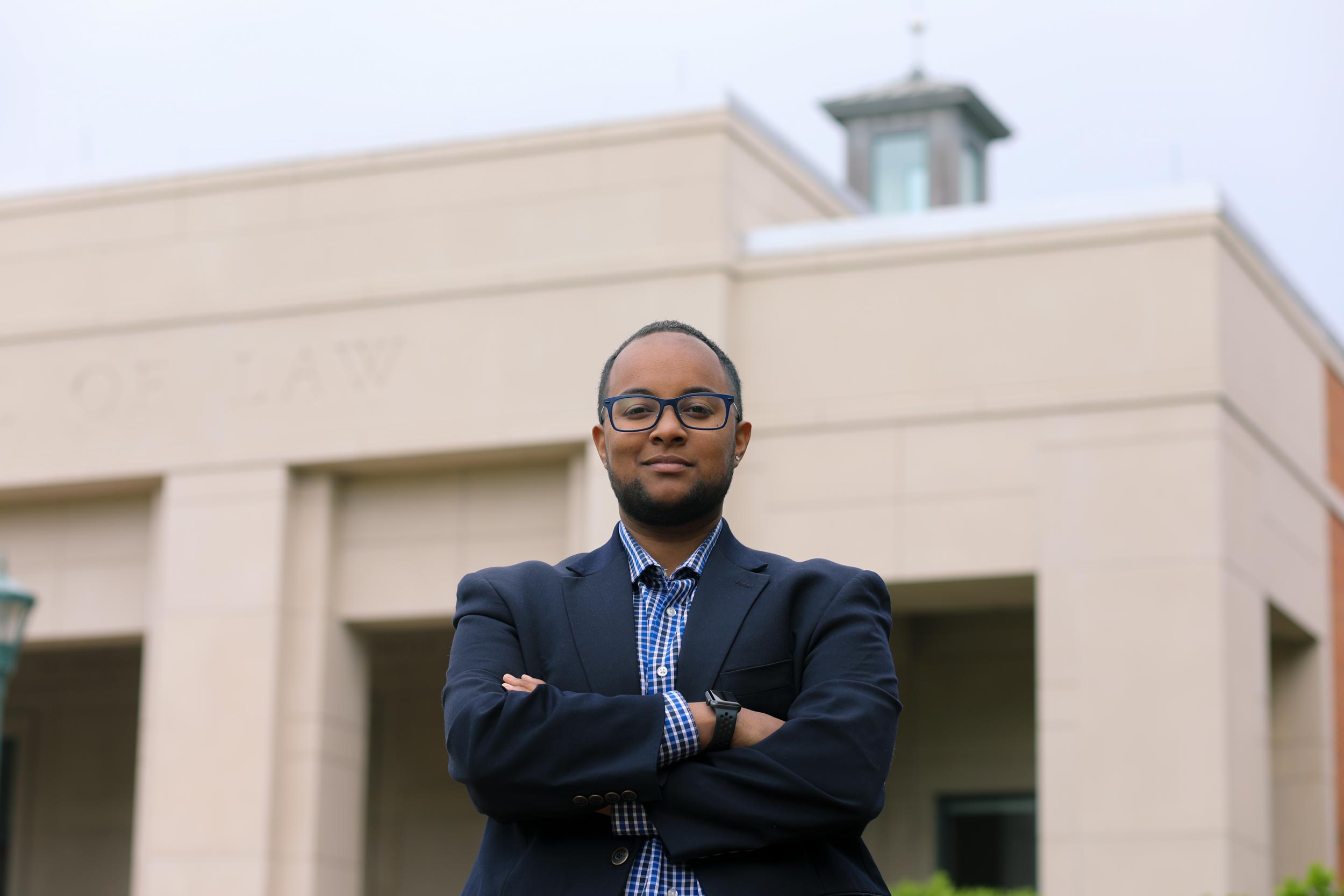 Activist-turned-attorney Jah Akande plans to return to his native Richmond to practice law. “I am directly connected and accountable to my community,” he said. “There’s so much to do.” (Photo by Julia Davis, UVA School of Law)

They were expecting their first child when a doctor spotted something troubling on their initial ultrasound: a cyst in the lung of the developing fetus. The cyst grew – in fact, tripled in size. The physicians considered prenatal surgery, “but it was just too risky,” Akande said.

Fortunately, he was born without further complication.

“I thank my parents for really believing in me from when I was so small and believing that I could make it,” he said. “They believed in me and I survived.”

Nine months after his birth, the doctors operated to remove the cyst that was consuming his left lung.

“I have a pretty gnarly scar on my left side,” he said. “Everyone laughs because I guess I have a big voice and a big personality. You wouldn’t know this guy has, like, a lung and a bit [of a lung].”

A dedicated civil rights advocate, Akande will graduate May 19 from the University of Virginia School of Law with an even stronger voice for representing others. He will be an advocate with a law degree.

Akande, who is transgender, has been an activist since coming out as lesbian at age 13. Starting at age 15, he began lobbying the Virginia General Assembly for workplace nondiscrimination policies, an effort that he has maintained over the years. He majored in political science at the University of Richmond, where he organized literal busloads of students on behalf of LGBTQ rights.

After college, Akande transitioned to life as a male and went on to teach high school in the United Kingdom for three years before pursuing a law degree. He intends to bring his legal skills back home to Richmond.

“I am directly connected and accountable to my community,” he said. “There’s so much to do.”

Since coming to UVA Law, Akande has continued to work on behalf of the rights of others as a member of the Program in Law and Public Service. That work has included volunteering on cases with the JustChildren program at the Legal Aid Justice Center.

In February, Akande and fellow third-year student Jacob Bradshaw helped get a client released early from the Department of Juvenile Justice. The youth was arrested after filming a video of two other teens fighting while egging them on. Imprisoned at 15 as part of a plea deal, he would have been incarcerated until age 21. Instead, he was freed by age 18.

“I saw him almost like a little brother,” Akande said. “He is my brother’s age. I was quite horrified by the sentence handed down. The system is not set up for people who look like us.”

Akande has sought to promote justice through other involvements as well. He served as education chair of UVA Law’s award-winning Black Law Students Association, working as a “bridge-builder” between underrepresented students and their professors and peers. He was interviewed by NPR about transgender discrimination in health care; worked as a volunteer on the Migrant Farmworker Project, which helps protect migrant laborers in Central Virginia from exploitation; and interned at the Office of the Federal Public Defender for the Eastern District of Virginia in Richmond, to help indigent clients in need of defense.

Akande ultimately aspires to litigate. He was a member of the Black Law Students Association mock trial team that advanced to the national Thurgood Marshall Mock Trial Competition after defeating seven other teams.

For his commitment to justice, Akande was co-recipient of the inaugural Gregory H. Swanson Award, named after the Law School’s first black student, who matriculated in 1950. Akande shares the award with his classmate and best friend at the Law School, Toccara Nelson.

Swanson “was a very courageous person to put his body on the line here,” Akande said. “He really exemplified notions of justice – core justice – and humility and character. It was a major honor to receive this award in his name, and for my classmates and my professors to look at me and see someone who is firmly committed to justice and who is firmly committed to inclusion and that everybody has a space here. I feel that about myself, and I try every day to wake up and aspire to that, but that doesn’t mean I’ve made it. I haven’t reached the mountaintop.”

After graduation, Akande will work in white-collar defense for the law firm McGuireWoods, from which he received the firm’s Annual Diversity Scholarship award his first year at UVA Law, and where he interned the following summer. He said he looks forward to continuing his work with the JustChildren program through the firm’s pro bono partnership with the Legal Aid Justice Center.

He will clerk for a federal judge in Ohio before joining the firm.

In addition to his parents, Akande said he has had one other important advocate in his corner for many years: his wife, Poyani Akande, has supported him both emotionally and financially throughout law school, putting him in a better position to help others.

What’s the True Story of Brooks Hall? This Architectural Historian Has the Answer END_OF_DOCUMENT_TOKEN_TO_BE_REPLACED

At UVA, There Is a Club for Everyone END_OF_DOCUMENT_TOKEN_TO_BE_REPLACED