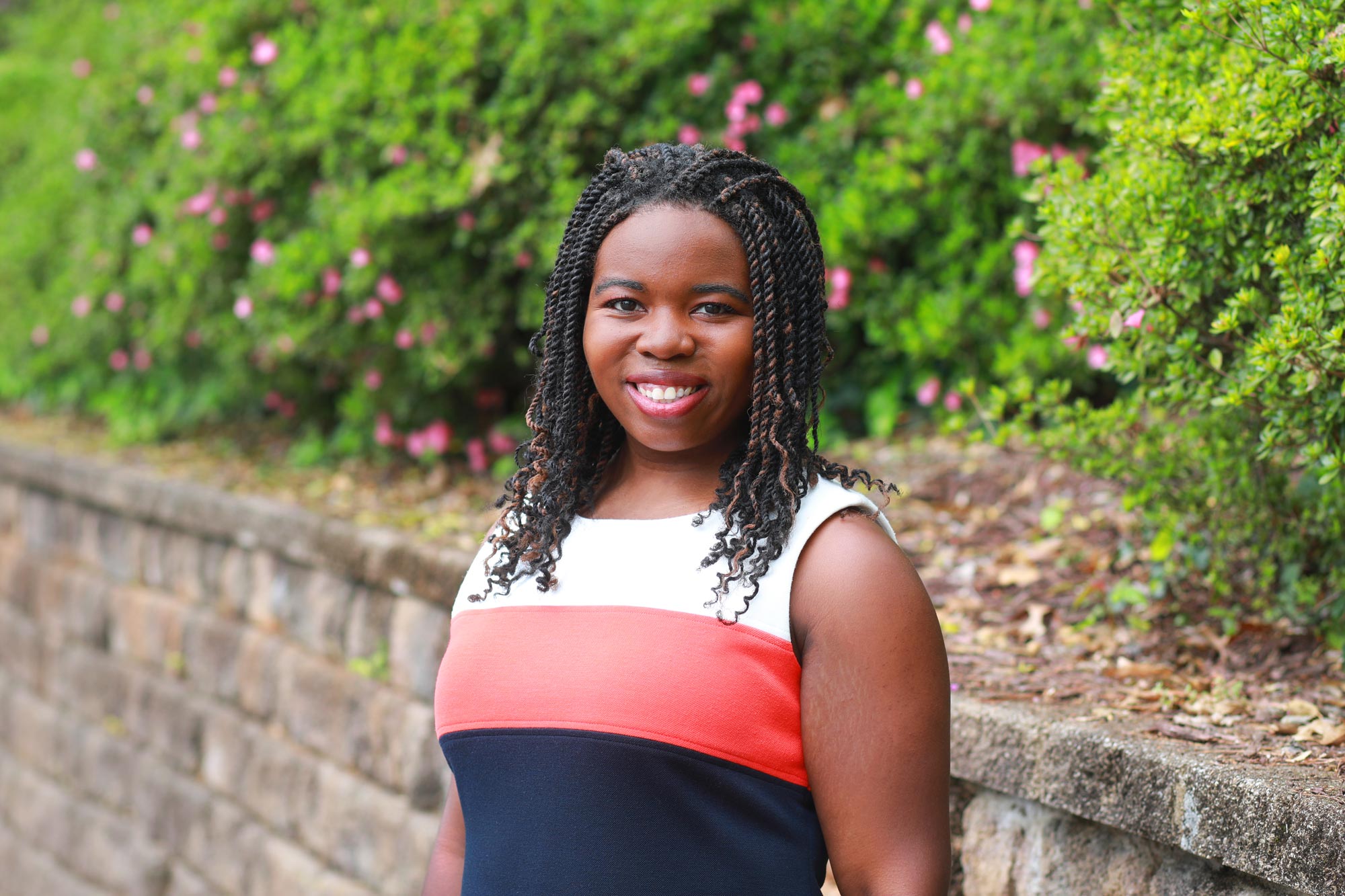 As president of the Student Bar Association, Jasmine Lee focused on students’ needs for community and connection. (Photo by Julia Davis, UVA School of Law)

University of Virginia law student Jasmine Lee has always been unafraid to tackle novel challenges. Auditioning for a Broadway show? Check. Weightlifting and kickboxing? Check, check. Welcoming hundreds of incoming School of Law students as president of the Student Bar Association? No problem.

“I think I’ve always had a spirit of, ‘Let’s just do it,’” said Lee, who concluded her term as SBA president in March and will graduate in May. “The worst that can happen is it’s a ‘no’ or a rejection. And if that happens, then I’ll just try something else.”

She harnessed that same spirit in leading the student body and throughout her three years at UVA Law. Lee said beginning her term as SBA president less than two years after white supremacist protests in Charlottesville – the violence coincided with her class’ entry into law school – gave her ambassadorial role a special meaning.

“I think that the idea of showing that, at this university, at this law school, a black woman could be in this role and be the student body president was really important,” said Lee, who is the fourth black woman to serve in the role. “That’s not to say that that was why I wanted to do it. But I think it can really matter to the person who comes to UVA, to be able to see that and know it’s a possibility.”

Lee, who received her undergraduate degree from UVA, said her primary goal as president was to expand the SBA’s role in the community.

“I love interacting with others and working on a team,” she said. “I want to say ‘yes’ to everything. I want to make it happen.”

During her tenure, the SBA started a Community Outreach Committee, led by classmates Colin Lee and Michele St Julien, which works with Madison House, a volunteer network hub for UVA students.

“They work within the community to see different ways that UVA Law can get invested and involved within Charlottesville, because we felt like there was a gap there,” she said. “That’s something that the University as a whole has really highlighted, especially after Aug. 11 and 12 – that we need to have more connection between the University and the city of Charlottesville or the county of Albemarle – and for students here to push for that in different ways.”

Lee also saw to students’ needs for community and connection. When the Foxfield races were scheduled to take place during fall break in 2018, the SBA established a new event, called Fauxfield, that is now a tradition. The organization also rented out two establishments on the Corner – UVA’s social district of shops, restaurants and bars – so law students could watch March Madness games last spring as the men’s basketball team blazed a path to an NCAA championship. Tickets quickly sold out.

Lee recalled the moment: “I’m just surrounded by all these law students watching us win our first national championship in basketball. So that was incredible.”

Around the same time, the SBA established a weekly Roots food delivery that is so popular, even Law School staff participate.

“I loved how excited people were about it,” she said. “And it was something that was so easy on my part and SBA’s part. But I think that it did a lot of good for people. And I was just always looking for ways to do good for people.”

“ I wanted to find ways to meet different people and really have a chance to grow. And I think that’s something I’m really proud of here, that I feel like I’ve grown a lot in my three years.”

Lee graduated from UVA with a double major in American studies and foreign affairs in 2016, then took a gap year serving in internships with the Kennedy Center in Washington, D.C., and the Community Idea Station in Richmond, an NPR and PBS affiliate near her Midlothian home.

Growing up with a mom who worked as a litigator, Lee thought a legal career seemed like a possibility. In college her interest solidified as she took classes that veered into legal topics.

“My parents have always been very encouraging. Like, if you want to try it, go for it. Let’s see what happens,” she said.

Her mother, Andrea White Lee, is a deputy commissioner at the Virginia Workers’ Compensation Commission in Richmond, and her father, Jerome Lee, is a pastor at First Baptist Church on West Main Street in Charlottesville.

“It made me more determined to make UVA what UVA could be,” she said. “I wanted everyone to really get a chance to see what UVA could be, what Charlottesville could be. And that’s something that I hope has happened for many of my classmates now.”

Lee served the school in other ways as well. She was on the editorial board for the Virginia Sports & Entertainment Journal, membership chair for the Black Law Students Association, a member of the Virginia Law & Business Society, and a Peer Advisor, mentoring first-year law students. In a callback to her interest in acting as a youth, when she attended theater camp, auditioned for Broadway roles and performed in high school productions, she also has participated in the Libel Show, the school’s annual comedy-musical sketch show, including performing in the 112th edition’s online skits. She was active in the North Grounds Softball League.

“I wanted to find ways to meet different people and really have a chance to grow,” she said. “And I think that’s something I’m really proud of here, that I feel like I’ve grown a lot in my three years.”

This year, Lee received the school’s Rosenbloom Award, which honors students with a strong academic record who have significantly enhanced the academic experience of other law students by volunteering support and assistance; as well as the Raven Society’s Raven Award for excellence in service and contributions to UVA.

One of Lee’s more prominent roles is serving as student co-chair of the Admitted Students Open House and as a Virginia Law Ambassador, giving tours of the school to prospective students and guests. The open house’s student life panels have moved online this year, via Zoom videoconferencing.

The last question she asks third-years participating in the panel is always, “What are you going to miss the most?”

“Most people’s answer is ‘the people.’ And I think that’s true. It’s the people, and it’s this community, and it’s the possibilities of what you can do and what you can achieve here that I think are really special.”

Lee said when she gave tours, she told prospective students she hopes that, wherever they go to school, “they look back with as much fondness, and love and happiness as I had with UVA. Because I think that’s all you can ever really want for someone.”

An important part of Lee’s law school experience was forming relationships with professors who served as mentors, including her first-year Contracts class instructor, George Geis.

“He was that kind of professor that I knew I could come to him and ask him about anything, and he would give really great advice, especially as I became more involved with SBA,” she said. “He’s someone that I definitely utilized a lot and really helped me grow and be the kind of leader that I wanted to be.”

She also praised Thomas Nachbar, with whom she worked on the Law School’s Curriculum Committee, and Kimberly Robinson, who also hails from Midlothian and graduated from the same high school as Lee.

“I think all of my professors have been so incredible and really amazing people to learn from,” she said, “but I really appreciated those professors that I’ve gotten to know a little bit more.”

During Law School she interned with the law firm Bracewell as a summer associate in Washington, D.C., and with NPR’s Office of General Counsel and ACLU of Virginia.

After she graduates, she plans to return to Bracewell in D.C., working in regulatory law.

“I liked the idea of using the law and practicing something where I’m continuously still learning and where things are changing,” she said.

Her flexibility came into play recently on a different front. With an in-person graduation ceremony on hold until at least October during the coronavirus pandemic, Lee will deliver the traditional speech by the outgoing SBA president online via video available on May 15.

She’s already reflecting on what her experience as a leader means to her.

“I’m really proud of my classmates that I have worked with,” she said. “As president, I got a chance to see and champion what other people were doing.”