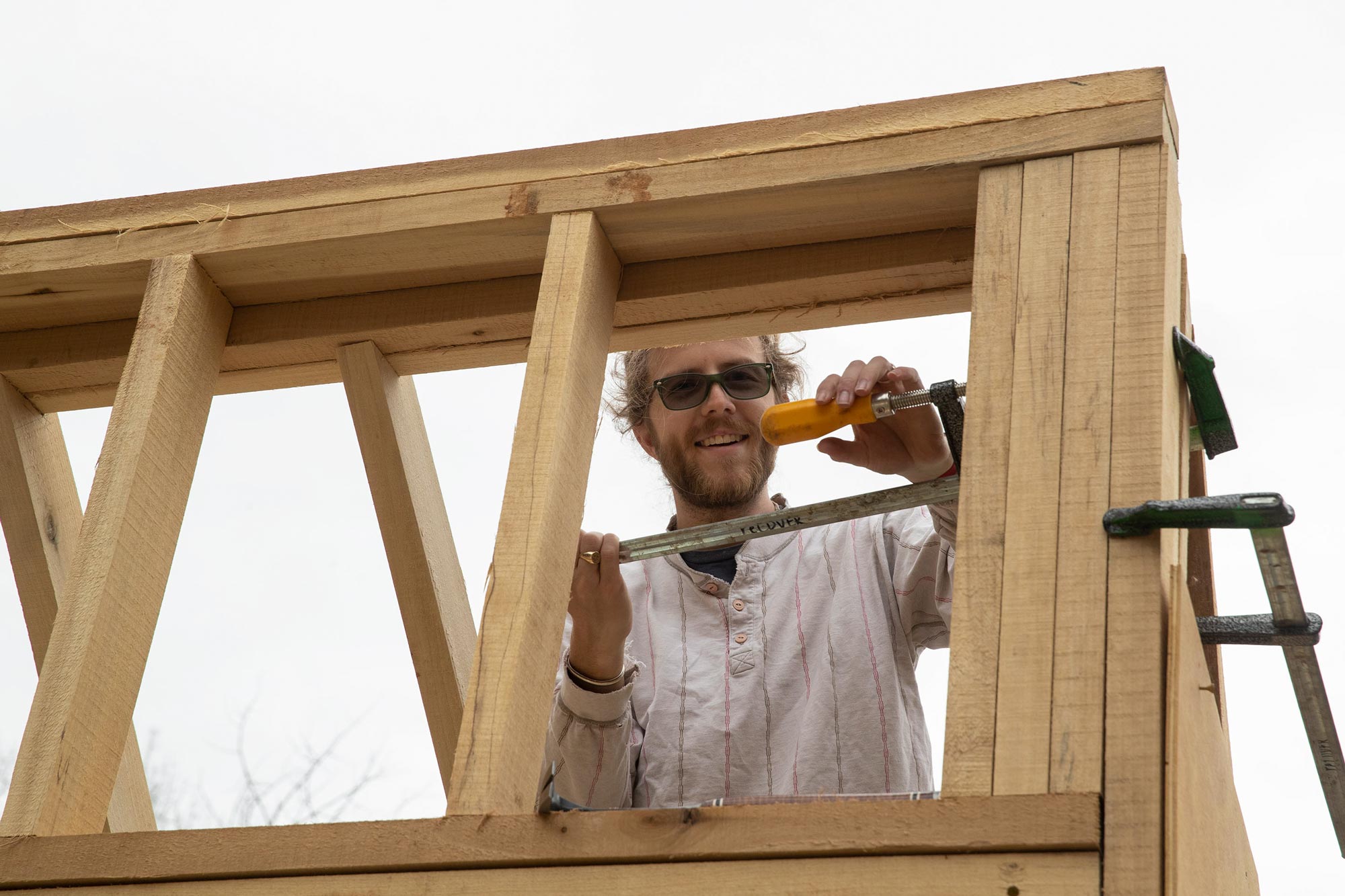 Graduates often leave behind a distinct legacy at the University of Virginia. Andrew Spears’ legacy will be a solar-powered lumber kiln.

Spears, graduating in May with a Master of Landscape Architecture degree from the School of Architecture, envisions trees taken down on the University Grounds being milled and dried, with that lumber used on Grounds, both by students and the Facilities Management crews doing repairs and building furniture.

“As a student in the Architecture School for the past three years, I have seen quite a bit of need,” he said. “It ebbs and flows, but last semester I was in a class where we all needed to computationally design a structure that was to be built out of wood completely, and then there were some advanced technologies that were creating joints and systems within the wood pieces.”

The wood for the projects came from local lumber yards or scrap left over from other projects, while trees taken down on Grounds were customarily hauled to a University lot on Observatory Hill to be composted, the smaller pieces chipped, with the resulting material eventually used by landscape crews on Grounds.

Spears saw a better use for these resources.

The idea hatched in the spring of 2019 after Mark Kutney, an architectural conservator with Facilities Management, and Andrew Johnston, an architecture professor, led a session on identifying soft and hard wood species of lumber for teaching assistants in Johnston’s “Materials and Culture” course. 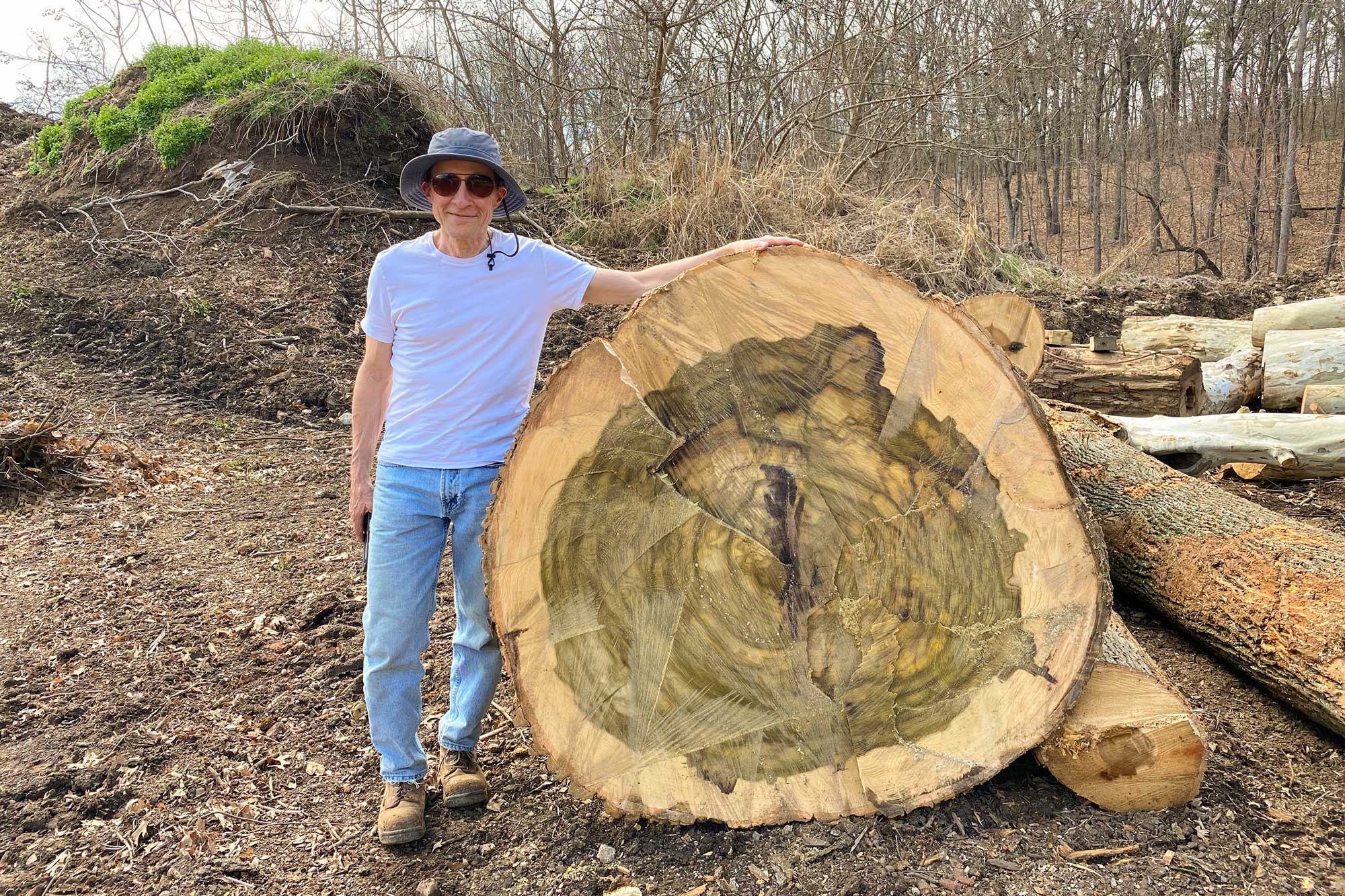 “We look at a bunch of wood samples from different species that are both culturally and historically significant,” Kutney said. “Then we give the students some hands-on familiarity with a few different local species of wood. We rely on the University arborists to supply us with something that has been recently cut. We typically ask for several logs, 16- to 20-inches in diameter, from two to six feet. The students split it up by hand and make some legs for stools, so they are working with green wood.

“At the end of this evening class, we got talking about a lot of the trees that come down at the University.”

Spears was one of the teaching assistants.

“We ended up discussing the idea that there are a bunch of logs sitting up on Observatory Hill doing nothing and how cool it would be if we could mill some of that into lumber that the school could use,” he said. “From there, we gradually worked our way up from just building a mill and then air-drying the wood somewhere else, all the way to applying for grant money to actually build a kiln.

“But mostly it started from trying to find a way to make use of 30 to 50 logs that were sitting up on Observatory Hill.”

Spears sought funding for a wood kiln, and he received $2,500 in a UVA Sustainability Green Initiative Funding Tomorrow grant. Spears said he and Kutney  initially started thinking in terms of a sawmill, but then decided on a kiln, since there were local mills that could be hired, while a kiln is a more permanent. Spears found a set of plans and set out to build the kiln. 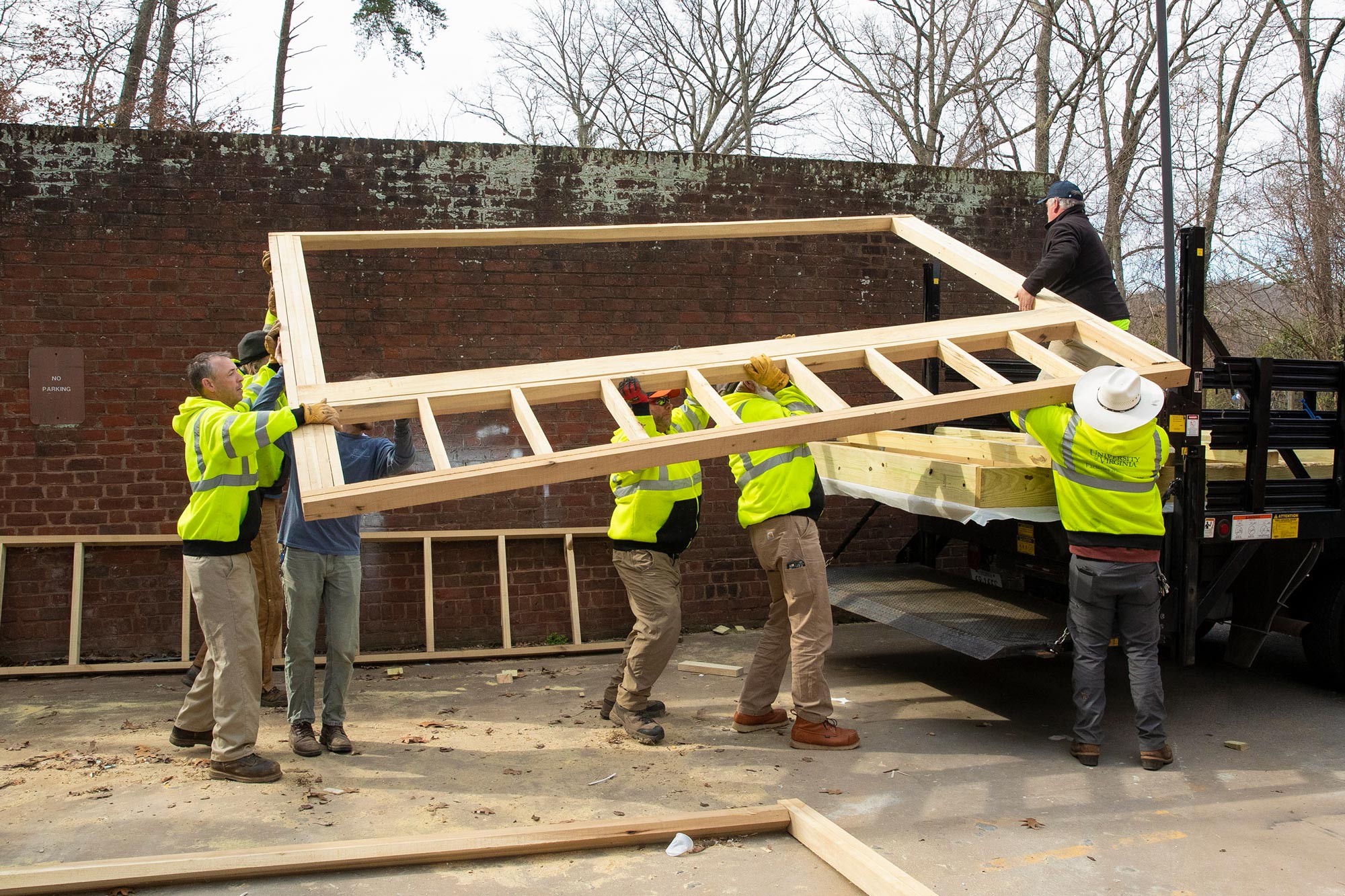 Rich Hopkins, the University’s landscape superintendent, supports Spears’ project and provided space for the kiln at the Observatory Hill yard.

“We remove dozens of trees a year that could be milled,” Hopkins said. “These are landscape trees removed due to their health – they are dead or dying – or trees that are being impacted by construction. And I’m sure we’ll be seeing a lot more ash as the emerald ash borer becomes more of an issue.”

Spears – aided by friends such as Anson Parker, who works at the University Health Science Library and is also a member of the Charlottesville Tree Commission – is using his carpentry skills to construct the kiln, which is roughly 7 by 14 feet – about the size of a large pick-up truck – with a slanted, PVC-paneled roof. The milled wood will be stacked inside and heated by the sun, with small fans powered by solar panels pulling air out of the structure to remove the moisture. The kiln is designed to dry 1,000 board-feet of red oak, a slow-drying wood.

Conventional kilns heat with electricity or gas; the newest technology microwaves the wood, drying it in days. The solar kiln’s slower process dries the wood in four to five weeks, depending on the thickness of the boards. Spears said there are several solar-powered commercial wood kilns in the region.

“The [solar] kiln is like a greenhouse,” Spears said. “We have a clear roof heating the space; all of the walls inside get covered with a thick, rubberized black paint, so basically the wood is just baking in there. But at the same time, you have fans running, and that is blowing the air around the lumber you have carefully stacked, and draws out that moisture as the kiln heats up.

“One thing that is nice about a solar kiln is it might be hot during the day, but during the night it is going to cool down and release some of those drying stresses and pressures that happen, and so that tends to dry the wood closer to air drying, instead of a commercial ‘let’s-get-this-dried-as-quick-as-we-can.’” 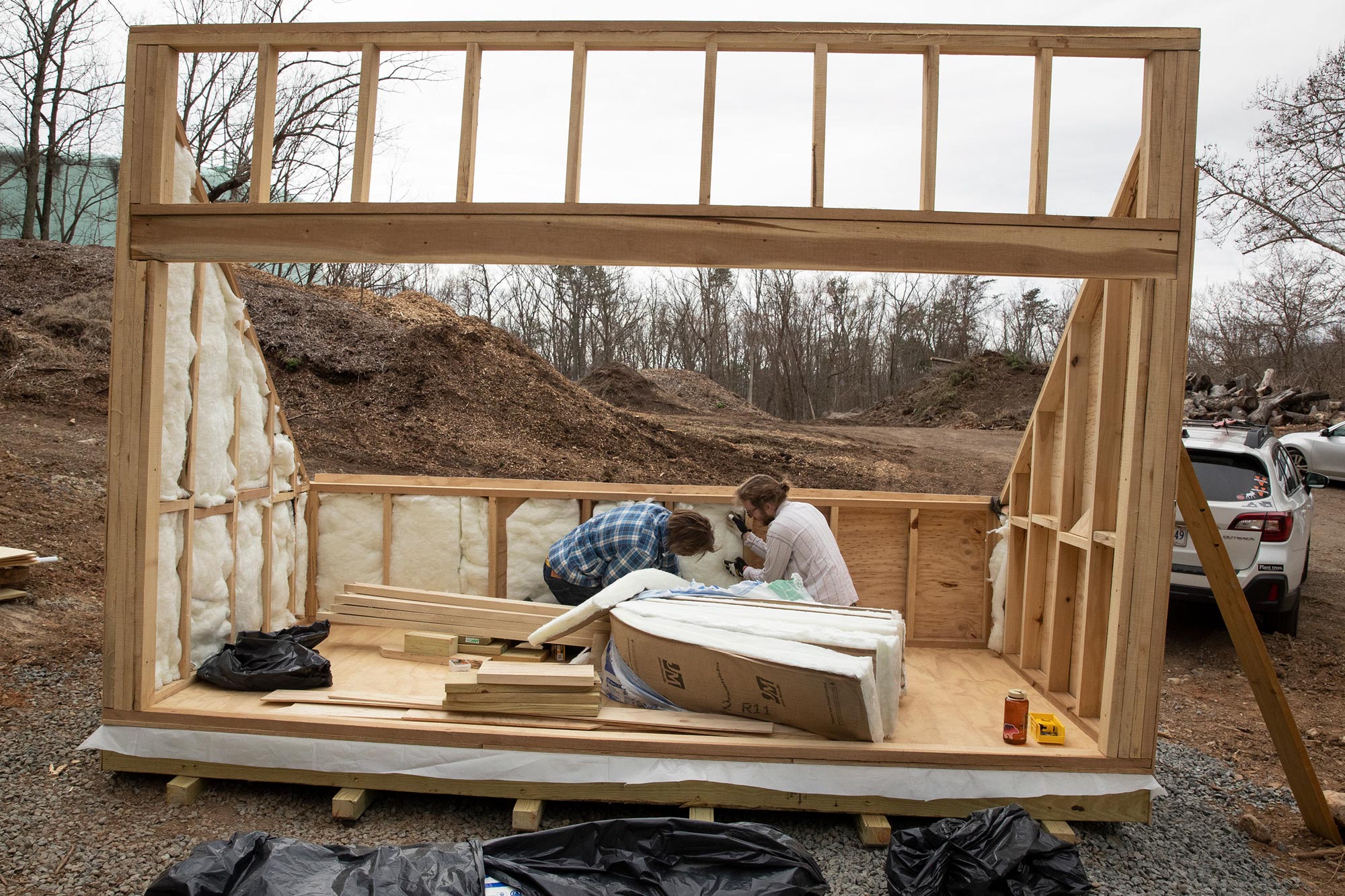 At this point, the kiln is about half-finished.

“The outside has been painted, but it still needs a solid roof, some interior work, and the doors attached nicely,” Spears said. “The progress was paused as I left the state with my wife at the end of March, to quarantine with her parents in Utah. When I return, I plan to continue working on it, albeit alone.”

Spears said they were not able to get any logs milled before the statewide COVID-19 lockdown, and he hopes to have the kiln completed by the time the logs are milled. He said just before the lockdown began, landscapers delivered to the yard several13-foot poplar logs, with a 55-inch base, taken down near Alderman Library.

Spears and Kutney sited the solar kiln at the Observatory Hill yard, where it is convenient to the downed wood. Once established, there should be a steady supply of wood through the kiln.

“Location is an issue,” Kutney said. “You want it close to where you are cutting the logs to save on transportation, and the Observatory Hill landscape yard seemed to be the best candidate for that, but the power is just not there. Designing a cost-effective process was also one of our goals.”

For Spears, the kiln in an example of how he wants society to rethink its processes.

Spears, of Paeonian Springs, earned a bachelor’s degree in applied biophysics from the College of William and Mary before coming to UVA to explore landscape architecture.

“It was a self-designed major and I came to UVA looking to get a design degree that was close to biology and ecology,” Spears said. “I came in as an absolute know-nothing. I have been here three years and it has been pretty great, with a chance to take on opportunities like this. I also took a class in forest ecology in the environmental sciences department last semester.”

Spears was interested in pursuing bio-mimicry or bio-inspired design, such as examining the foot of a gecko lizard, which can stick to walls, and then reverse-engineering that technology into a glove. Or using the structure of a fish fin to design a propeller. 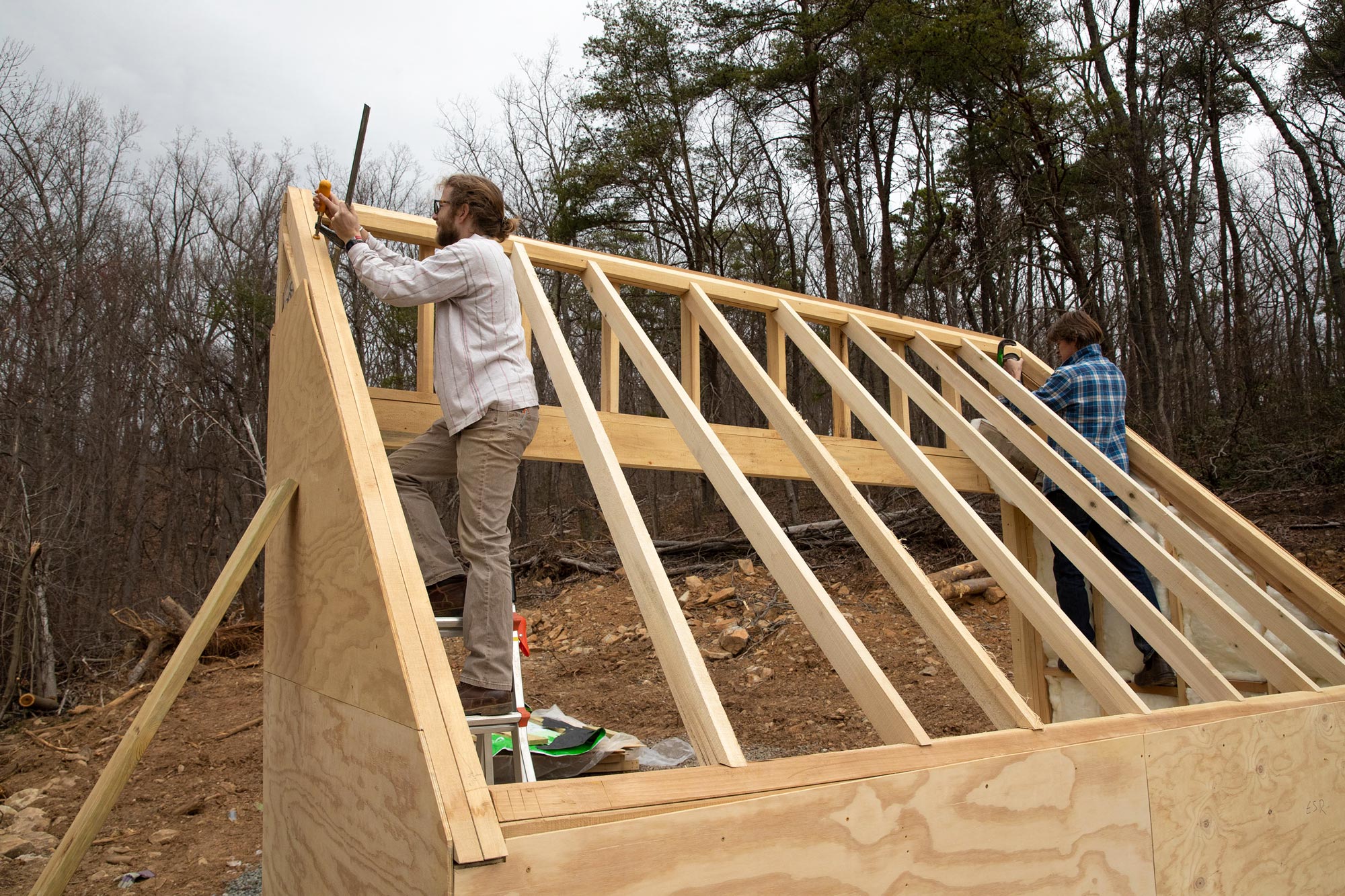 “That was my interest coming in, and that has morphed over time as I worked in the woodshop as a teaching assistant,” he said. “There were some of the eye-opening moments in landscape architecture, such as where we walk through the impact of the timber industry on the landscape, or the lithium battery industry. They got me interested in different ways we could build the cities of the future based on our resource use.”

While a graduate student, Spears worked with landscape architect and master craftsman Roger Sherry of Plank Road Studios in North Garden, where he performed a variety of tasks, from woodworking to plantings.

“Sherry is very hands-on and shows how to practically carry out some of the things we have been learning in the classroom,” Spears said.

Spears’ wife, Emily, is finishing a program at the Curry School of Education and Human Development. They plan on remaining in the area, with Spears working as a landscape architect and Emily teaching middle school science.

Spears wants to stay connected with the kiln project and work with other students to carry the project into the future.

“I would like to spend more time with his project, and there are still quite a few logistical things to work out,” Spears said.

Spears said that while pursuing his passions has led him down some rabbit holes, he sees this journey as a success.

“I have learned that given the right set of circumstances, that my being passionately interested in something has the potential to not necessarily change the world, but to make a significant change where I see an opportunity.

“I wouldn’t say that this project has been all me.  There have been people encouraging me and pushing me, but there have been a lot of times when it has been just me. I am pretty happy with myself for sticking with it.”

It’s Copperhead Season in Virginia. Here Is What You Need to Know END_OF_DOCUMENT_TOKEN_TO_BE_REPLACED

What’s Next for UVA’s Class of 2022? END_OF_DOCUMENT_TOKEN_TO_BE_REPLACED