Religious studies assistant professor Nichole M. Flores addresses the first-year students in her College Advising Seminar on religion and politics in the 2016 election. The class was one of the first held in the renovated Rotunda. (Photos by Dan Addison)

What could be more appropriate than to teach religion and politics in the University of Virginia’s Rotunda, a building designed by the author of the Virginia Statute for Religious Freedom?

UVA founder Thomas Jefferson’s iconic Rotunda returned to classroom duty Tuesday, the first day of the new academic year, after being closed for two years for renovations. A central aim of the work was to return student activity to the Rotunda, and part of that is opening instructional space in the Lower West Oval Room and two classrooms in the southeast wing of the building.

Once the building fully opens in late September, students also will be able to use the Rotunda for study space and for scheduled social activities.

While the rest of the building remains closed for another several weeks, the classrooms were in use Tuesday, providing a new experience for students and, in one case, a faculty member. 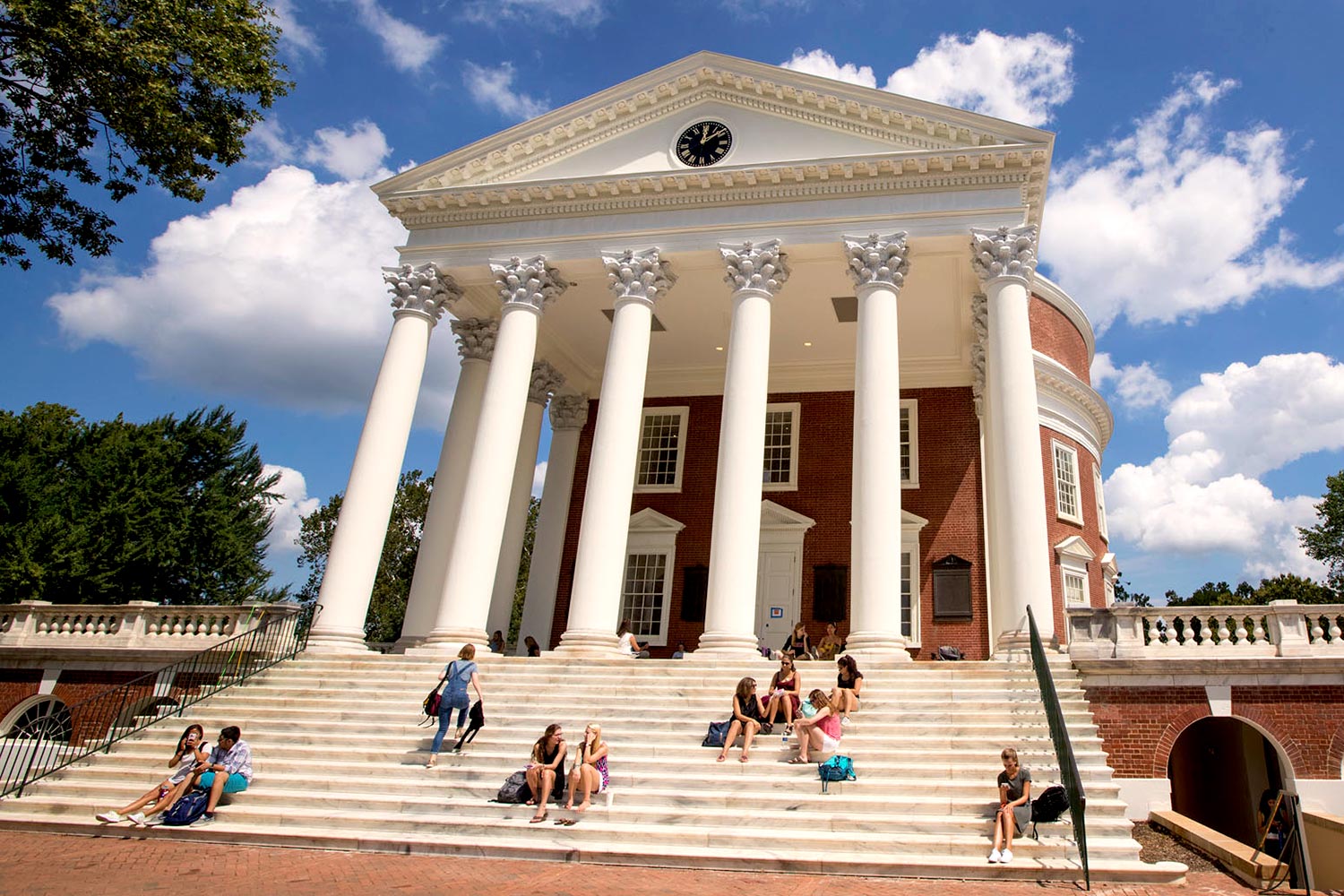 Students return to the steps of the University of Virginia’s iconic Rotunda on the first day of classes. (Photos by Dan Addison/University Communications)

At 12:30 p.m., Nichole M. Flores, an assistant professor of theology, ethics and culture, conducted a College Advising Seminar in the Lower West Oval Room on “Religion in the 2016 Elections” for 18 first-year students. Like most of her students, it was her first time in the Rotunda.

“The renovations had started when I arrived on Grounds,” Flores said. “This building is of symbolic importance of the way the University remains grounded in its legacy, but also explores the future. I am really excited about teaching in it.”

She said it is also a wonderful opportunity for the incoming students to experience the unique character of the school.

“The Grounds are flooded with historical significance,” she said.

“I’ve always loved UVA and Thomas Jefferson and history,” said student Emily Graffeo of Greenwich, Connecticut. “Being in the Rotunda is really exciting to be a part of this history and be a part of the education Jefferson envisioned.”

Thomas Irby, who was born into a U.S. Navy family in New Jersey and raised in England, said the experience of having a course in the Rotunda was “awesome.”

“I think it’s cool to have a class in a building that is a symbol of UVA,” he said.

Ryan Ballie of Mechanicsville also used the word “awesome” to describe his experience. “At first I couldn’t even find it and then I asked one of the carpenters,” he said. “I walked in and it looked like a big office. This is pretty cool.”

The Lower West Oval Room, with its curved walls conforming to the shape of the Rotunda’s rounded exterior, is fitted out with all the accouterments of a modern classroom: wireless connections, a retractable display screen and modular furniture, dark wood chairs with black leather pads and tables arranged in a capital H. Outside the windows, workers concentrated on the last details of the building. 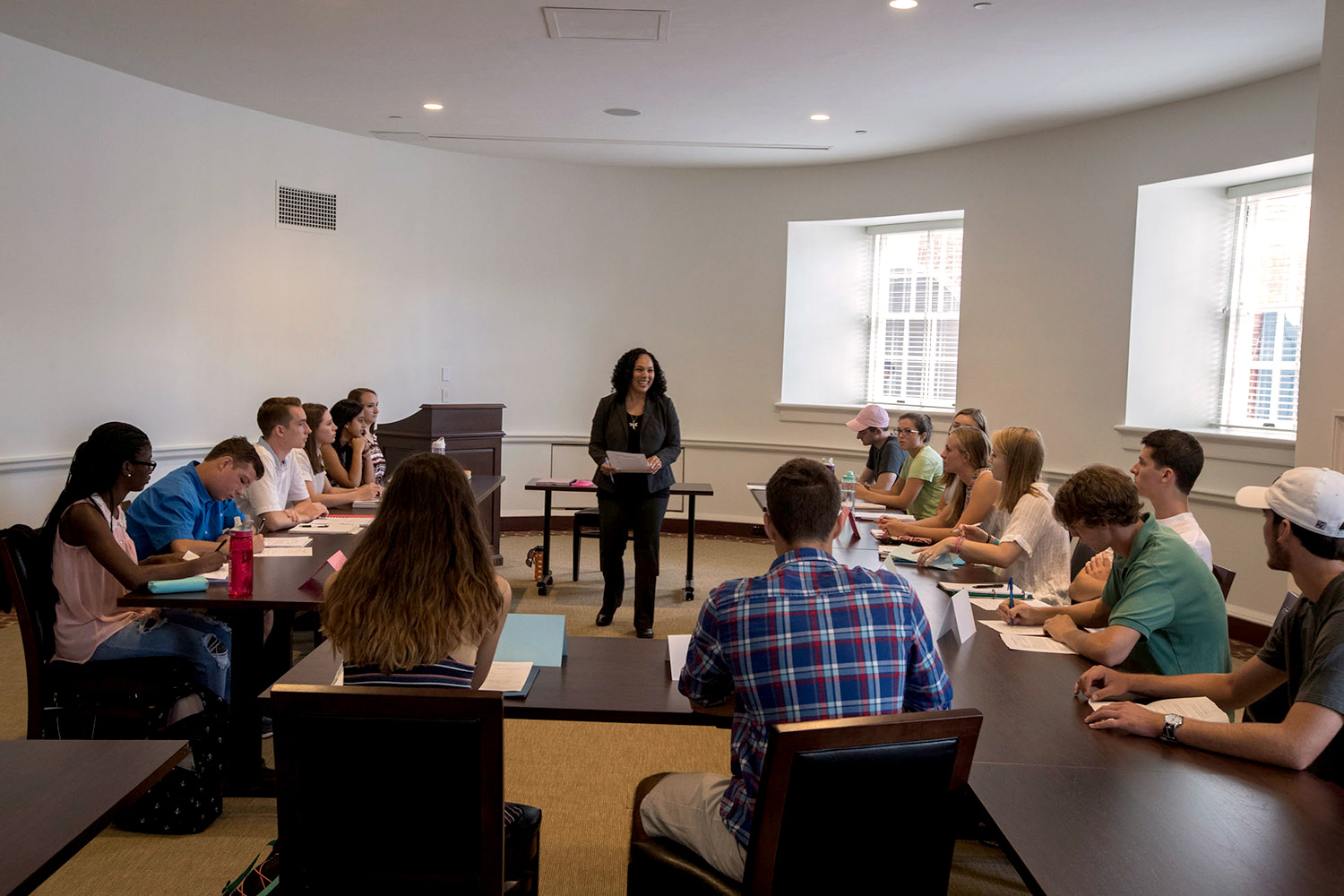 Religious studies assistant professor Nichole M. Flores addresses the first-year students in her College Advising Seminar on religion and politics in the 2016 election. The class was one of the first held in the renovated Rotunda.

Flores, who teaches courses about religion and social ethics and bioethics, religious discipleship and martyrdom, and slavery and human trafficking, said her class grew out of some questions she considered during the 2012 presidential campaign, when Republican nominee Mitt Romney was a Mormon.

“Romney was seen as a religious outsider,” Flores said. “This is a way to open up a conversation.”

During the course, the students will analyze news sources, examine political speeches and write speeches of their own.

“The students will have to construct their own news feeds, and explain why they selected the outlets they did,” she said, “and the class will be able to analyze the strengths and weaknesses of these.”

They will discuss how to be citizens in a diverse society and the nature of virtues, such as civility, tolerance, humility and justice.

“We will discuss what constitutes the common good in a religiously plural society,” Flores said. “I am teaching students who come from a diverse range of religious traditions, and they will be looking at policy issues that include bioethics, war and immigration. They will get a chance to practice their rhetorical skills as they process the material.”

One advantage of the course is that students will be able to follow the issues, discuss them through the election and see how the various predictions play out. After the election, the students will discuss the public responsibilities of citizens in a society constituted by pluralism and difference.

“This year, reality has defied the best predictions,” Flores said and the students agreed.

When Less Is More: How Harnessing the Power of Subtraction Can Add to Life END_OF_DOCUMENT_TOKEN_TO_BE_REPLACED