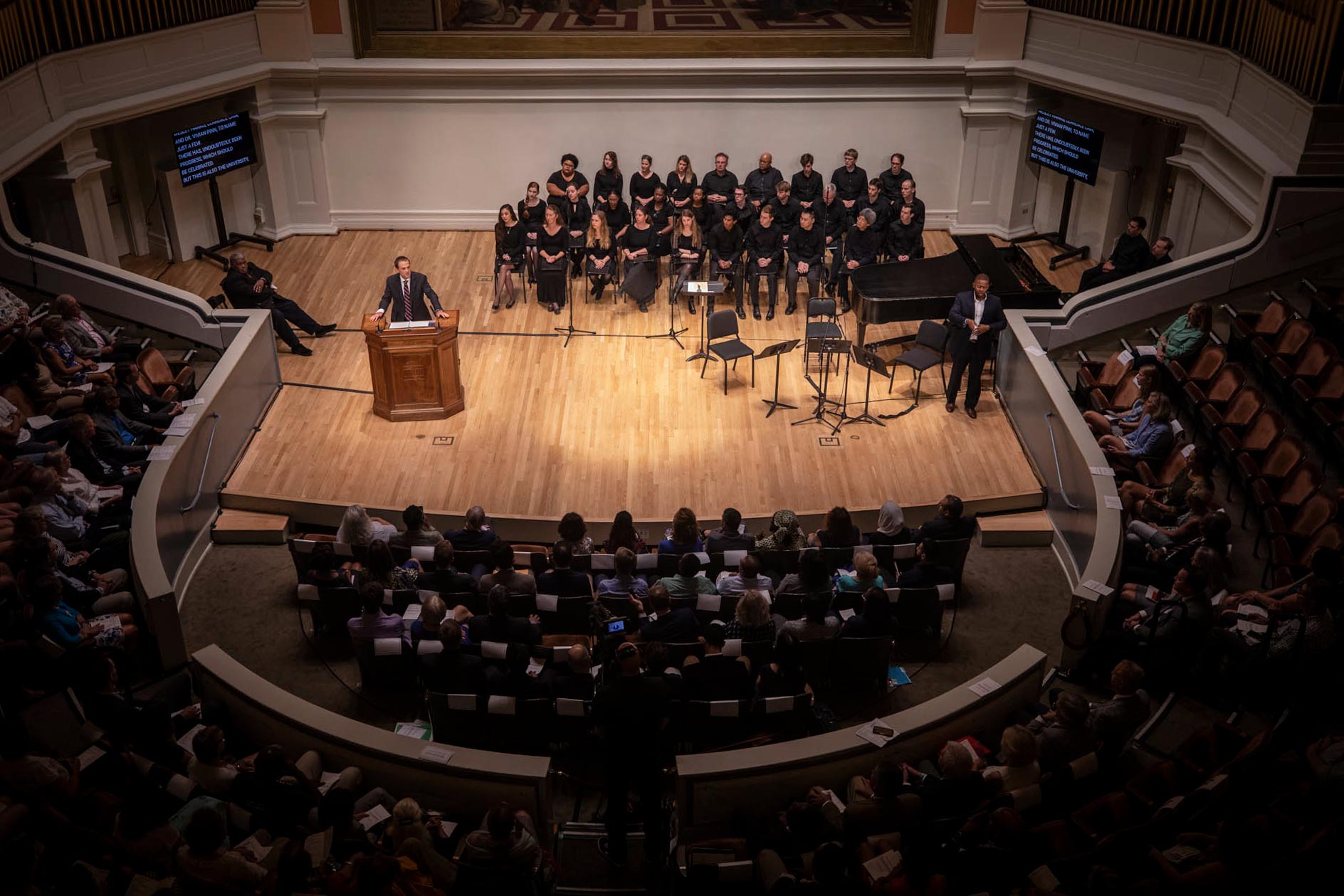 Saturday morning dawned muggy, quiet and solemn in Charlottesville as members of the University of Virginia community came together to reflect upon the violent white supremacist demonstrations at UVA and in Charlottesville one year ago.

In his address, “The Imperfect Pursuit of High Ideals,” Ryan urged the University and the wider community to address gaps between its highest aspirations and its reality.

The morning began with a moment of silence, a hush falling over the crowd in the large auditorium as they honored those hurt or killed in last year’s violence, including 32-year-old Heather Heyer, whose mother Susan Bro was in the audience, and state troopers H. Jay Cullen and Berke M.M. Bates. Across Grounds, the bells of University Chapel tolled in remembrance.

Saturday was, as the Honorable John Charles Thomas told the audience in his opening remarks, a morning of both grief and hope. Thomas, the first African-American appointed to the Supreme Court of Virginia and the youngest person ever to sit on the court, earned both his undergraduate and law degrees at UVA. 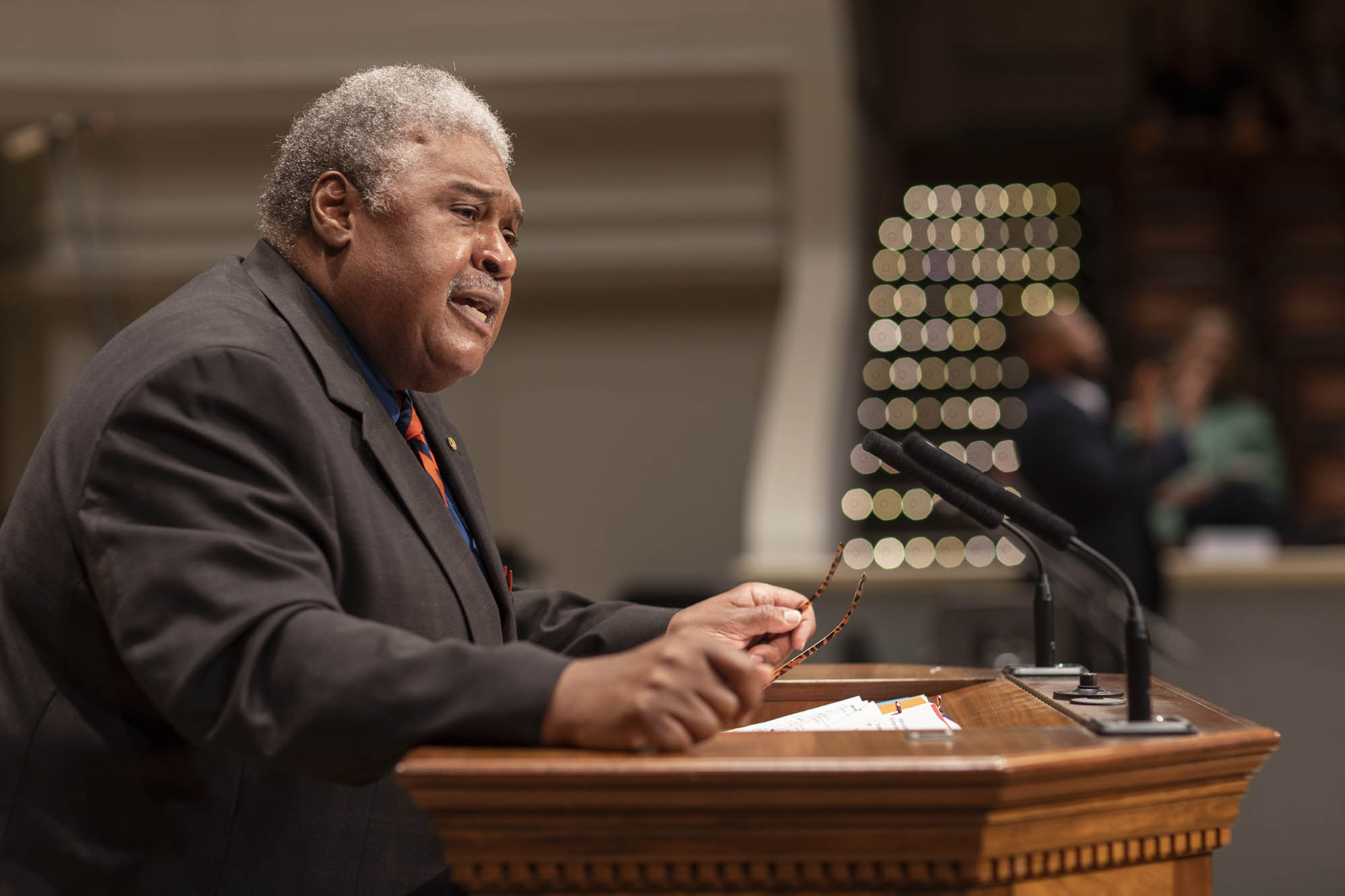 “We gather here today because we are sure that light will conquer darkness, that understanding is more curative than bigotry, that love is stronger than hate, that hope will lead us to a better day,” Thomas said. “Without hope we lose our determination to build a joyful future, but with hope we are inspired to embrace our differences and with hope we are motivated to uplift humanity… Thus, hope gives us the courage to stand up against evil, and so it is that we join together this morning to contemplate the hope that summons us.” 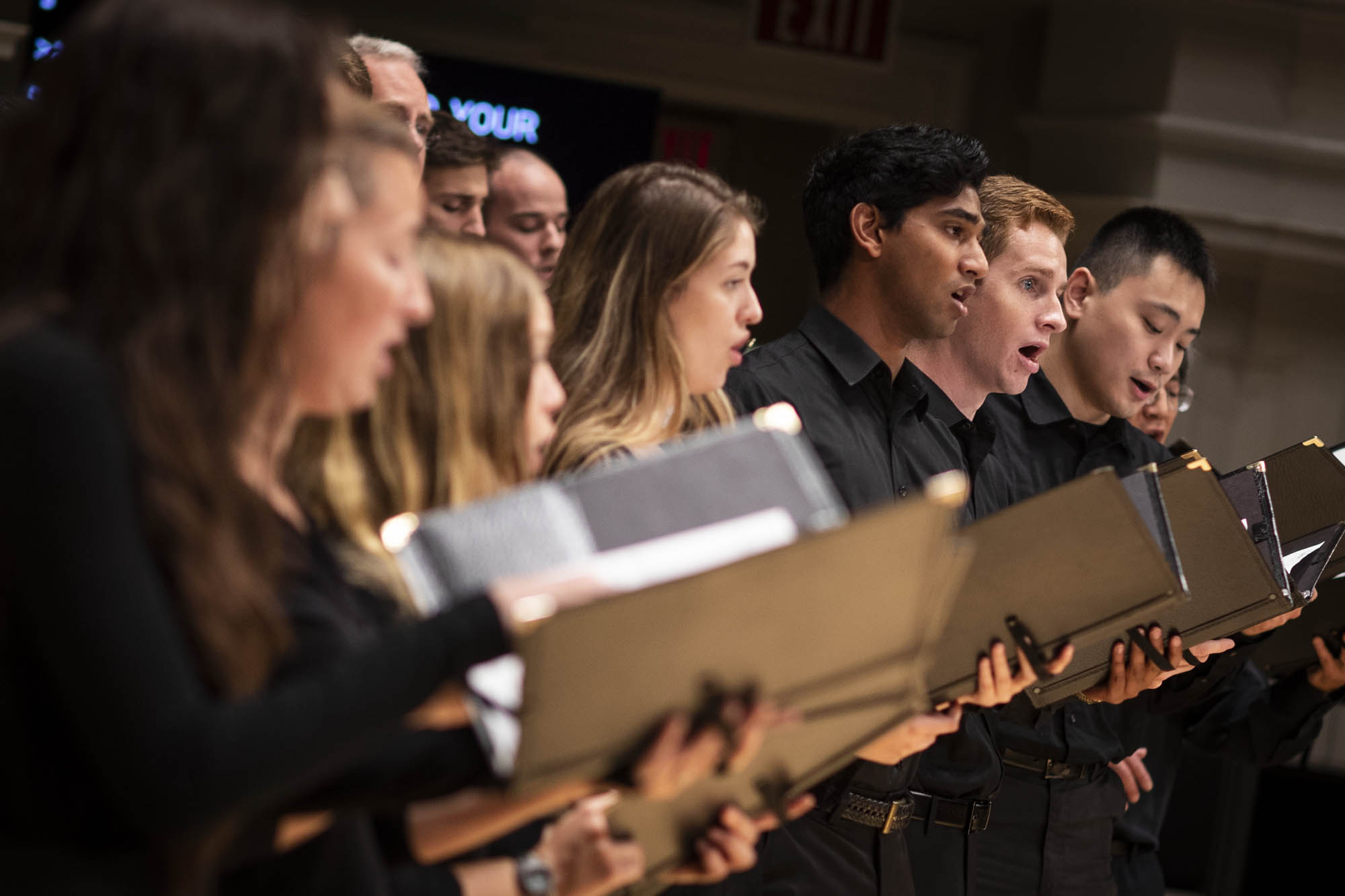 Saturday was also, Ryan said in his remarks, a time to recognize “the gaps that still exist between our aspirations and our everyday realities.”

Ryan took the stage after choral performances by members of the Oratorio Society of Virginia, the University Singers and the Zion Union Baptist Church Adult Choir, as well as a poetry reading – “This Poem is Not About Facebook” – by Valencia Robin, who earned her Master of Fine Arts degree from UVA in May, and a reading, in eight languages, of Coretta Scott King’s quote, “The greatness of a community is most accurately measured by the compassionate actions of its members.” 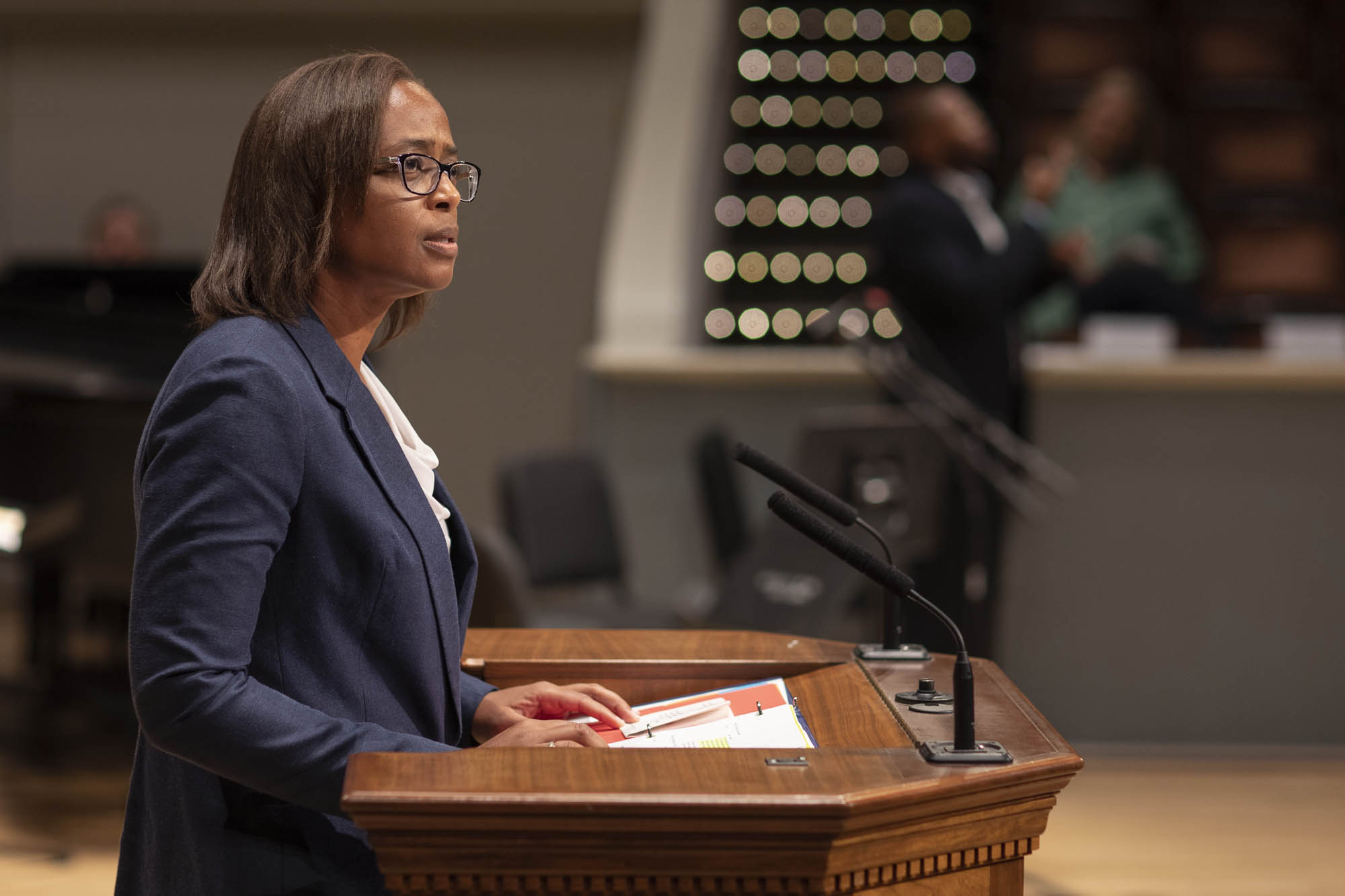 The new president focused his speech on closing the gap between ideals long cherished as a core part of the University – diversity, tolerance, civility, equity and inclusion, to name a few – with the harsh realities that last year’s marches exposed in the community and the nation. 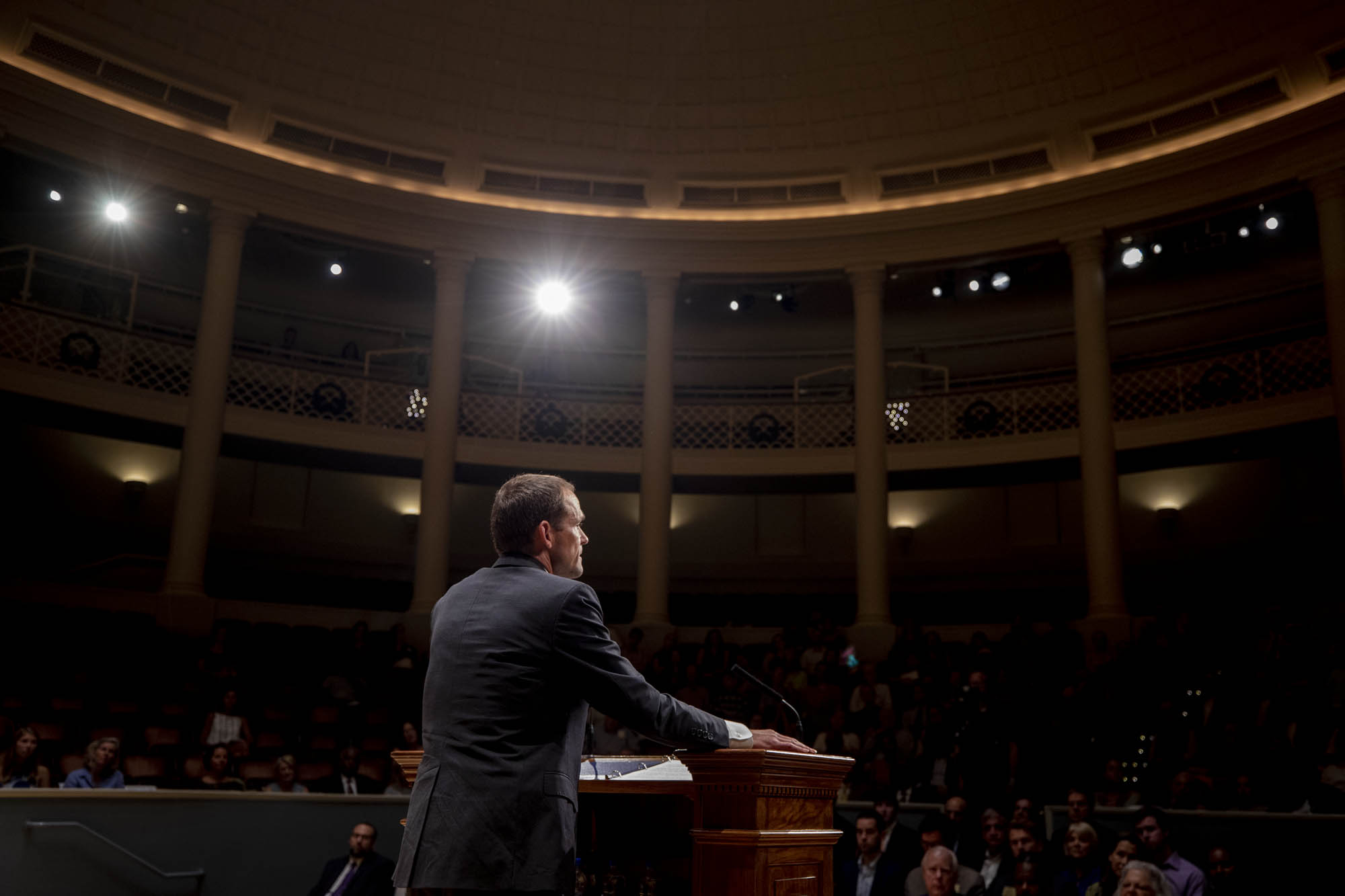 “Our professed and cherished ideals as a community were confronted with the grim and horrific reminder that everyday realities are sometimes quite different,” Ryan said. “To wrestle with that difference, to come to grips with the gaps that still exist between our aspirations and our everyday realities, is indeed what being an American is about. It is also, importantly, what being a member of this community is about, or should be.” 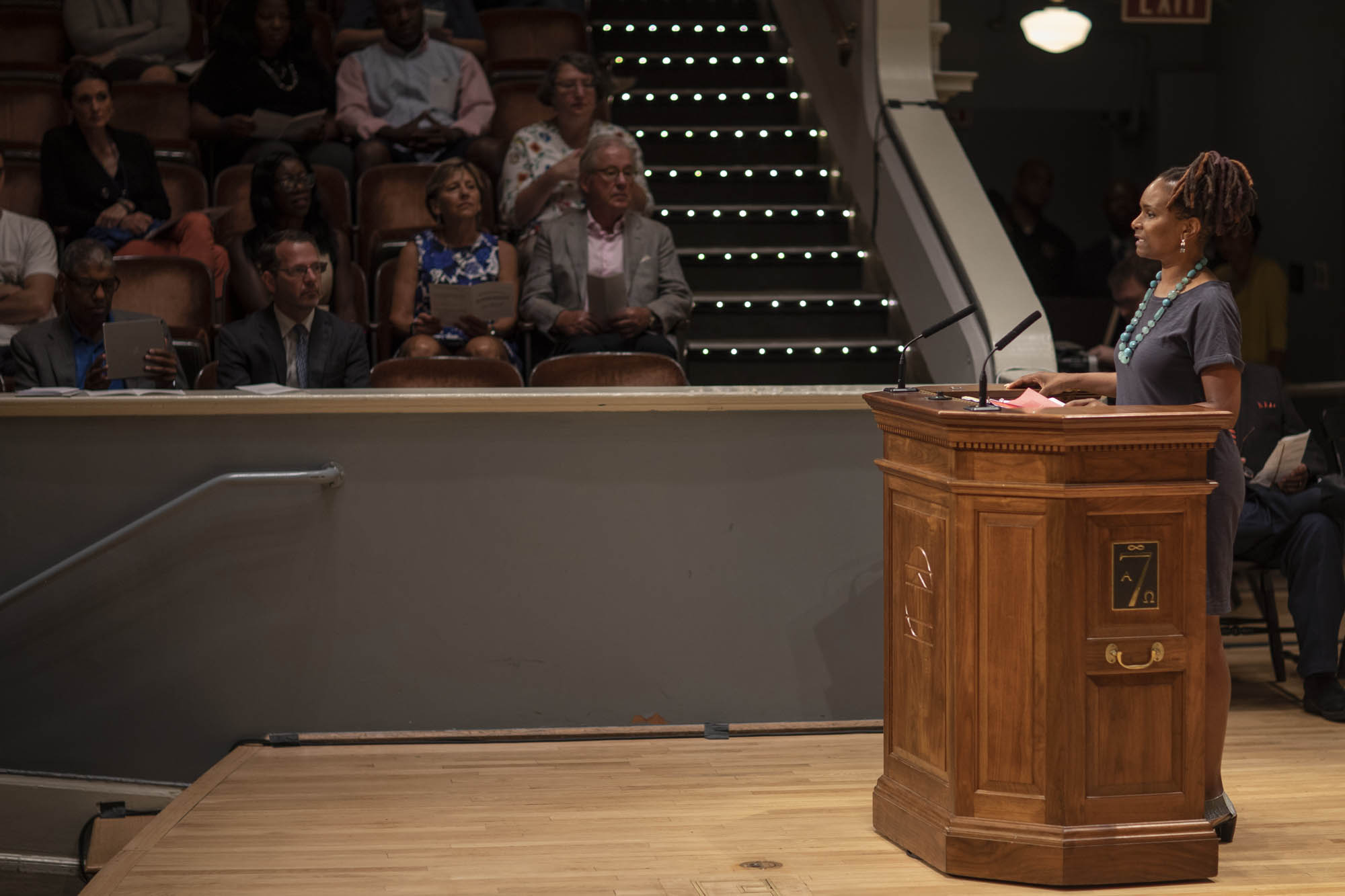 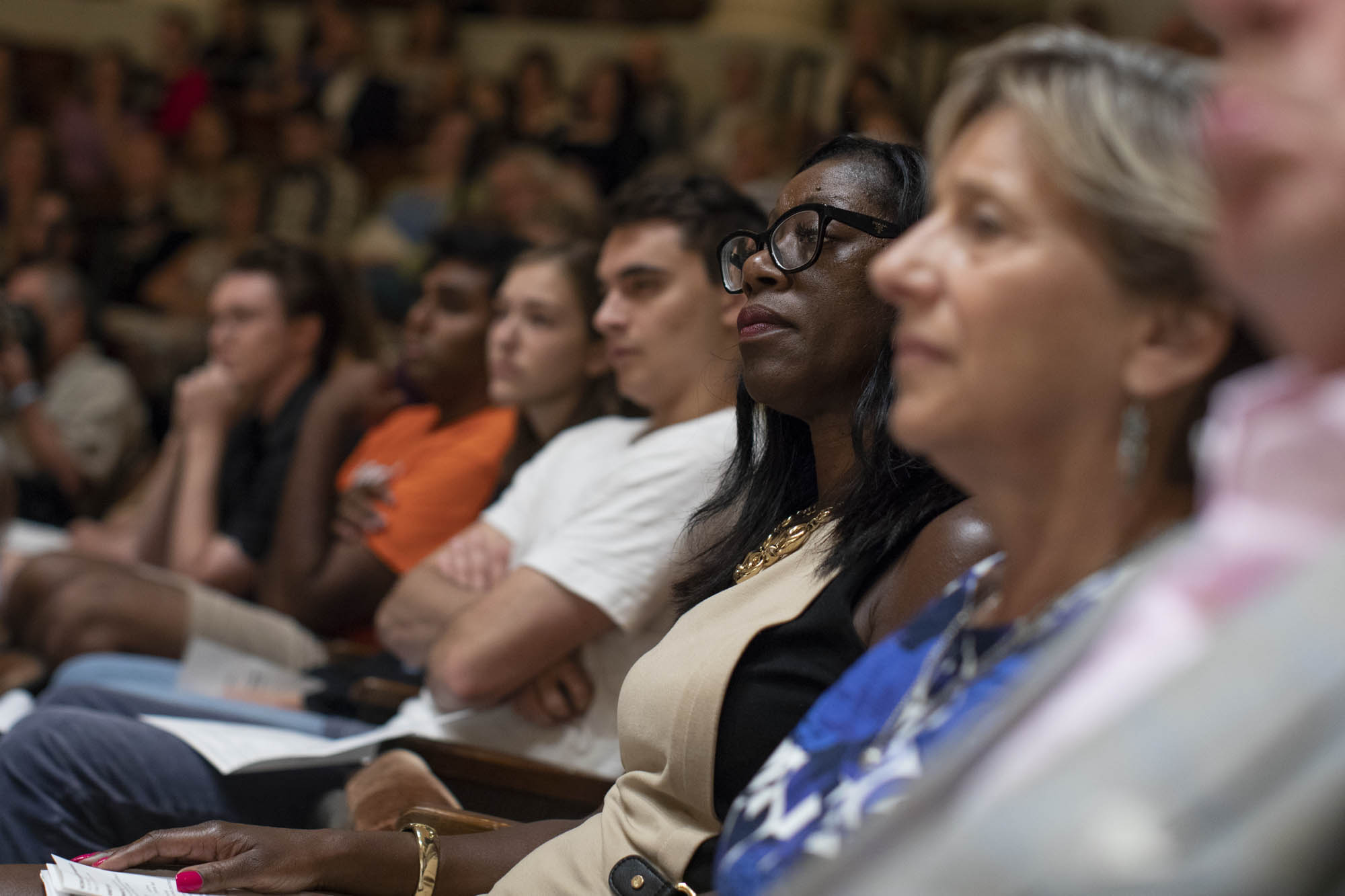 However, he continued, it is also important to acknowledge far less illustrious parts of the University’s past and present.

“This is also the university, we should acknowledge, if we have the courage to be candid and open to self-examination, that graduated two of the organizers of last year’s hateful march,” he said. “To be part of this community – be an honest and courageous member of this community – we have to recognize that there is still a gap between our aspirations and realities.”

Ryan also acknowledged the counterprotesters who were surrounded by torch-bearing marchers in front of Thomas Jefferson’s statue on Grounds last August.

“We do nothing more than recognize our common humanity to say to those who were attacked around the statue last year: I am sorry. We are sorry,” he said.

Ryan ended his remarks with his hope that the University would constantly seek to close that gap and continue pursue its ideas courageously, while acknowledging that there will inevitably be obstacles and mistakes along the way.

Doing so, he said, is the best hope we have.

“I believe with every fiber of my being that the pursuit of high ideals, even if carried out imperfectly, is our only chance,” he said. “And I believe that is what universities, and ours in particular, should be all about.”

Here Is What You Need to Know About the New Coronavirus Variant, Omicron END_OF_DOCUMENT_TOKEN_TO_BE_REPLACED

Fall Is in the Air on Grounds END_OF_DOCUMENT_TOKEN_TO_BE_REPLACED

Meet the Cats and Dogs Your CVC Donation Supports END_OF_DOCUMENT_TOKEN_TO_BE_REPLACED