Clot-Busting Undergrad Team Gets an Education in Device Design 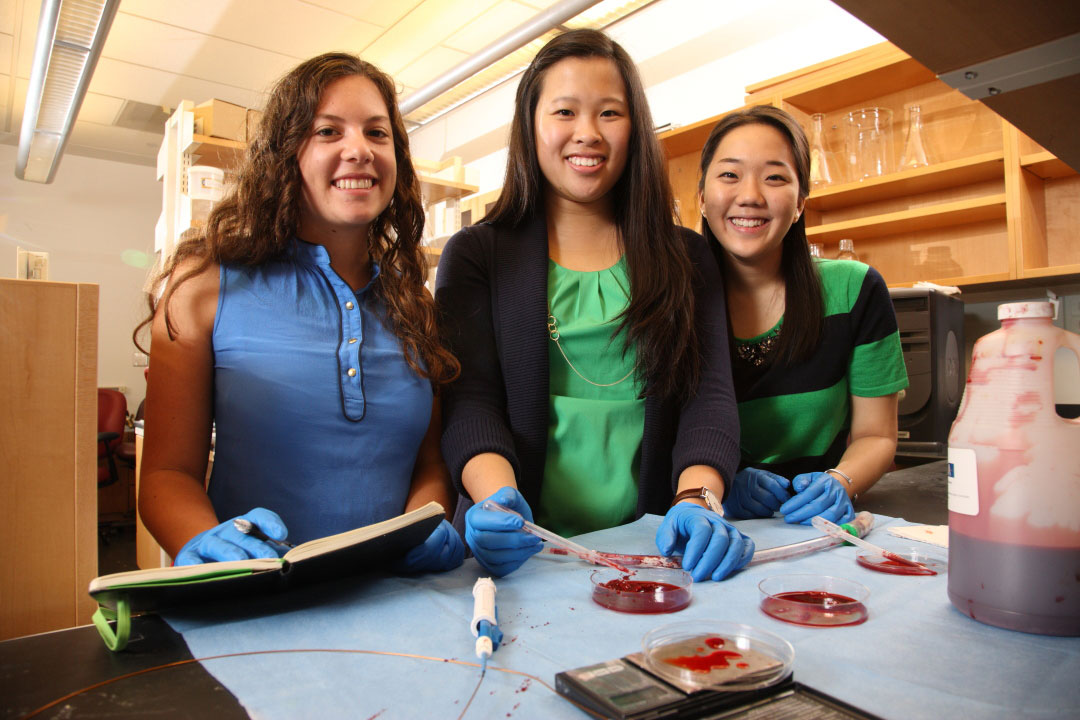 There are scores of reasons why people develop deep vein thrombosis, a condition caused by a clot blocking a blood vessel, typically in the leg. They range from sitting for long periods of time to obesity to inherited clotting disorders.

But as fourth-year University of Virginia biomedical engineering students Lana Hoang and Lindsey Morrison discovered, there are few good treatments, especially if the clot forms in large veins where the legs join the trunk.

Hoang and Morrison are set to graduate May 18, but a year ago they were students in “Advanced Design,” a third-year biomedical engineering elective led by associate professor Timothy Allen and David Chen, manager of U.Va.’s Coulter Project, which seeks to translate biomedical research into new devices and treatments. As part of the course, students identify a medical challenge, familiarize themselves with current practice and establish criteria for a new device, method or program leading to better care.

“We were looking for an area where we could potentially have an impact,” Hoang said.

The need for a better approach to treating deep vein thrombosis came up repeatedly in conversations with Dr. J. Fritz Angle, the director of the Division of Angiography and Interventional Radiology, and his colleagues. Once physicians administer an anticoagulant to contain clotting, their further options are limited. They consist of powerful, expensive drugs that may cause internal bleeding, or less effective mechanical devices usually designed to work in smaller arteries, rather than large veins.

Finding a better solution is critical. More than 600,000 cases of deep vein thrombosis occur annually in the U.S., and it is dangerous even when it is not uncomfortable. The clot can break lose, travel through the bloodstream and lodge in the lungs, causing a potentially fatal pulmonary embolism.

“Our goal is to create a device that would be cheaper and more effective at thoroughly removing a clot than existing methods,” Morrison said. “Ideally, it would also help hospitals use their resources more efficiently, reducing the number of overnight stays.”

Hoang and Morrison enlisted Grace Chung, another biomedical engineering student, to join them in the fourth-year Capstone project required for graduation from the School of Engineering and Applied Science, which they dedicated to developing and testing a functioning prototype of “ThromBust,” the name they gave to their new clot-busting device. Because the group was not part of an established research laboratory, their first order of business was to find funding. The team successfully secured a $3,000 Alcoa Innovation Grant to support their efforts.

Arriving at an appropriate design was no easy task. “Vessels are so easily damaged and clotting is such a complex process,” Hoang said. “It made finding a feasible design very difficult.”

Fortunately, the Charlottesville branch of Luna Innovations made its “TrueClot,” a trademarked blood simulation product that the company developed for training combat medics, available to them. The blood simulant enabled them to develop lab testing methods so that they could evaluate how current devices work and how theirs might offer an improvement.

After meeting four days a week for most of the school year, the team has drafted its engineering drawing and investigated the manufacturing process.

“The process of iterative brainstorming really proved productive,” Hoang said. “We’ve learned that the first time you try to make a feasible design, you may not get the result you wanted. You have to be willing to go back to the drawing board and hash out the issues and try again.”

At the same time, the group has worked to avoid getting stuck in the details.

“We found it’s all too easy to get wrapped up in a small aspect of the design challenge and keep adding features,” Morrison said. “It’s really important to step back and adopt a ‘less is more’ approach.”

All three students have job offers that will pull them away from the project after graduation, but their belief in their design is strong. “We’re hoping that a new Capstone group will be willing to continue our work,” Chung said.

A Year We Will Never Forget: 2019-20 in Review END_OF_DOCUMENT_TOKEN_TO_BE_REPLACED

‘What Will You Carry With You?’ Remarks From UVA President Jim Ryan END_OF_DOCUMENT_TOKEN_TO_BE_REPLACED