Colbert Entertains Class of 2013 and Even Sprinkles in Some Advice 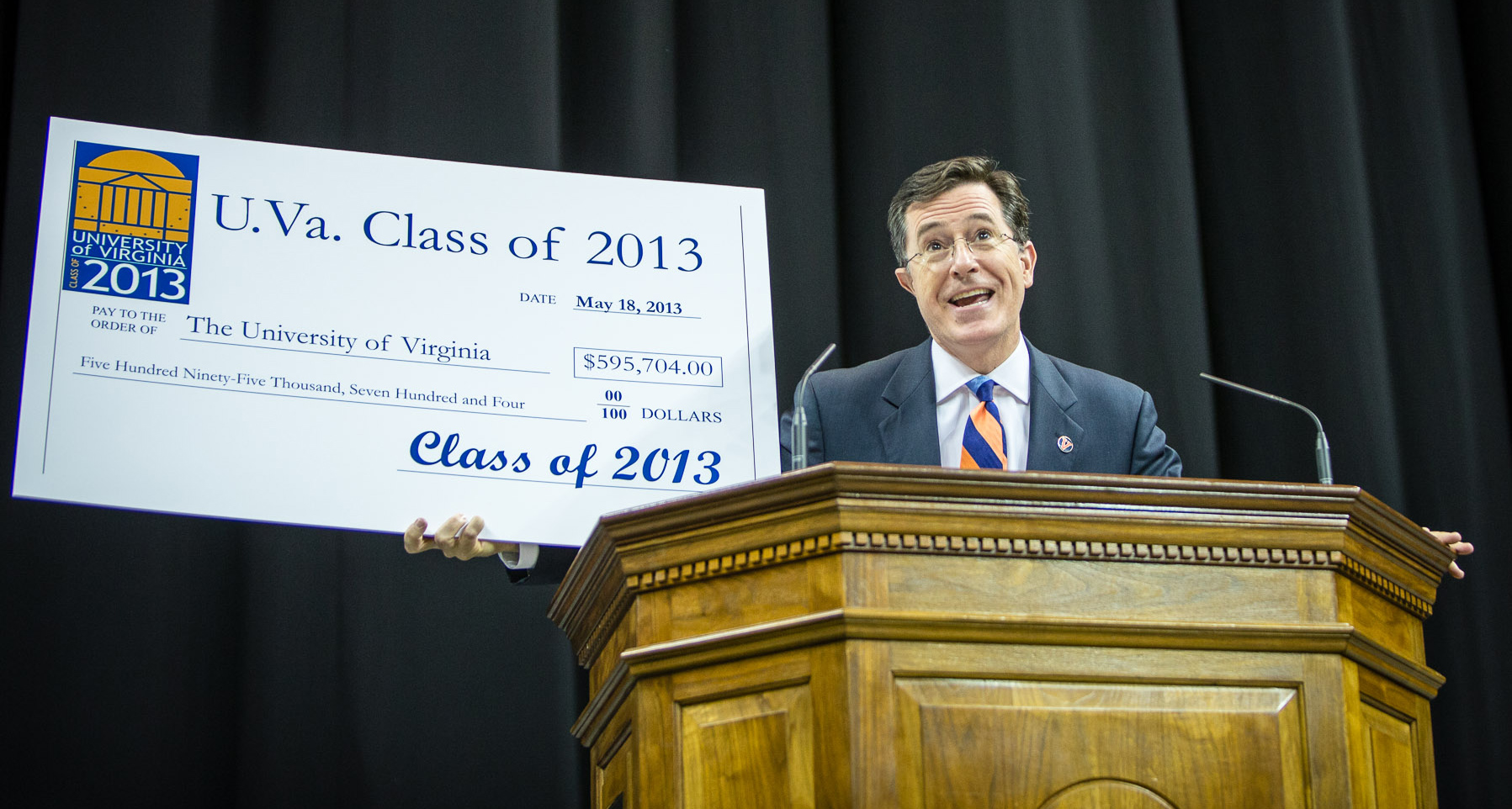 When comedian Stephen Colbert took the podium today at John Paul Jones Arena to deliver the keynote address at the University of Virginia’s Valedictory Exercises, he picked up the Class of 2013’s large cardboard check for almost $600,000 and said, “Thank you. This is way more than I expected. I would’ve done it for free. This is incredibly generous.”

Part of Finals Weekend festivities, the ceremony allows the graduating class to pay tribute to its time at the University and present the class gift and awards. Usually held on the Lawn, it was moved indoors due to rain; the lure of Colbert – the fourth-year students’ No. 1 choice as the featured speaker, according to Class President Sheridan Fuller – drew a nearly full house.

Colbert did not disappoint. He entertained the graduates and their families with his characteristic quirky humor, largely minus the mock conservative schtick he has made famous on his popular television show, “The Colbert Report.” He even drew the camera to him to show on the giant “Hoovision” screen his trick of folding over his right ear, then popping it back up when he squints.

(Watch all of Colbert’s remarks here.)

In thanking the Class of 2013 for inviting him to speak at the ceremony, he also thanked President Teresa A. Sullivan, saying, “President Teresa Sullivan, you are way better than the last president – Teresa Sullivan,” referring to the events of last June when the Board of Visitors asked Sullivan to resign, and then reinstated her after public protests. “You are clearly the woman for this job.”

Rather than asking people to turn their cell phones off, Colbert said they should turn their phones on to make sure they didn’t miss any texts or tweets – and just in case he himself tweeted anything during his speech, which, in fact, he did later.

He poked fun at some of the unique terms that set U.Va. apart from other universities. “Instead of saying, ‘We are members of a proud educational tradition dating back to our nation’s founders,’ you say ‘Wahoowa,’” he said. “Which begs the eternal question, ‘Wahoo-why?’”

Having toured the Grounds earlier in the morning, he then asked the graduates, “Why are you leaving? This could be the most spectacular place you have ever lived,” pointing out that the University is the only college campus designated a UNESCO World Heritage site.

Another reason the University is so impressive, Colbert said, was because it rejected him when he applied to transfer from Hampden-Sydney College. He said he failed to submit an essay with his application in 1984, and asked if his speech could now serve that purpose.

“Because this is a smart school, let me just toss in some SAT words: syzygy, heterodox, Benedict Cumberbatch,” he said.

“But perhaps the real reason U.Va. is so great is that it trusts its students. You have the nation’s oldest student-run honor code. Say it with me.” He then recited the Honor Code – “On my honor as a student, I pledge I have neither given nor received help on this assignment” – before appending, “so help me Adderall,” referring to a medicine for the treatment of attention deficit hyperactivity disorder that some college students reportedly take to help them focus.

His favorite thing about U.Va., Colbert said, are the secret societies – “That’s sexy,” he said, proceeding to name a few of them. When he got to the Seven Society, whose members are not revealed until their deaths, he said, “I’m not going to say I am a Seven; I’m not going to say I’m not a Seven. I’m just going to say ...” and then he chanted some gibberish while waggling his fingers like a butterfly. After the laughter died down, he added, “And now I will have to have you all killed.”

“But of course the greatest figure associated with U.Va. is your founder, Thomas Jefferson – TJ, Prez Tommy Jeff, the freckly anti-federalist, Louisiana purchee, old Bible slicer, or as most Americans know him, the inventor of the six-inch wooden cypher wheel.”

Colbert said one thing he took issue with was the scope of Jefferson’s beliefs, which were too broad and made him hard to pin down, unlike today’s politicians who have to fit into the box of conservative or liberal.

Jefferson’s relations with his slave, Sally Hemings, proved to be too tempting a target for Colbert. “In public life, we often see Jefferson as the embodiment of white male patriarchy,” he said, “but in his private life, he was known for, shall we say, embracing diversity. Very affirmative in his actions. Am I right? I am right. They did the DNA tests.”

He included an advice section in his talk, mentioning TIME magazine’s cover story on today’s young people, which called them “lazy, entitled narcissists who are part of the me, me, me generation.”

“That’s very upsetting to us Baby Boomers, because self-absorption is kind of our thing. We’re the original ‘me generation,’” Colbert said.

A bit more seriously, he said, “There is no secret society out there that will tap you on the shoulder and show you the way. The true secret is, your life will not be defined by the society we have left you.”

He told students to have the courage Jefferson and his generation did – to create something for themselves.

Quoting Jefferson, he said: “Your generation, no less than his generation, has their own opportunity to recognize and seize that moment ‘when in the course of human events it becomes necessary for one people to dissolve the bands that have connected them with another and to assume among the powers of the earth your separate and equal station and for the support of this, mutually pledge to each other your lives, your fortune and your sacred honor.’

“If anyone can do this, it is the graduates of the university that Jefferson founded. You are his intellectual heirs.

“In fact, some of you may be his actual heirs – we’re still testing the DNA.”

Valediction also included the Class of 2013 awards (see article here) and remarks from several of the class trustees, plus the presentation of the class gift. This year’s class had the highest participation rate of any previous class – 68 percent – and made donations and pledges totaling $595,704, the second-highest amount of any class.

Sullivan said the gift will benefit all seven of U.Va.’s undergraduate schools, hundreds of programs and services and the Rotunda renovation.

It will not go to Stephen Colbert after all. Wahoowa.

What Is the ‘4th Side’? END_OF_DOCUMENT_TOKEN_TO_BE_REPLACED