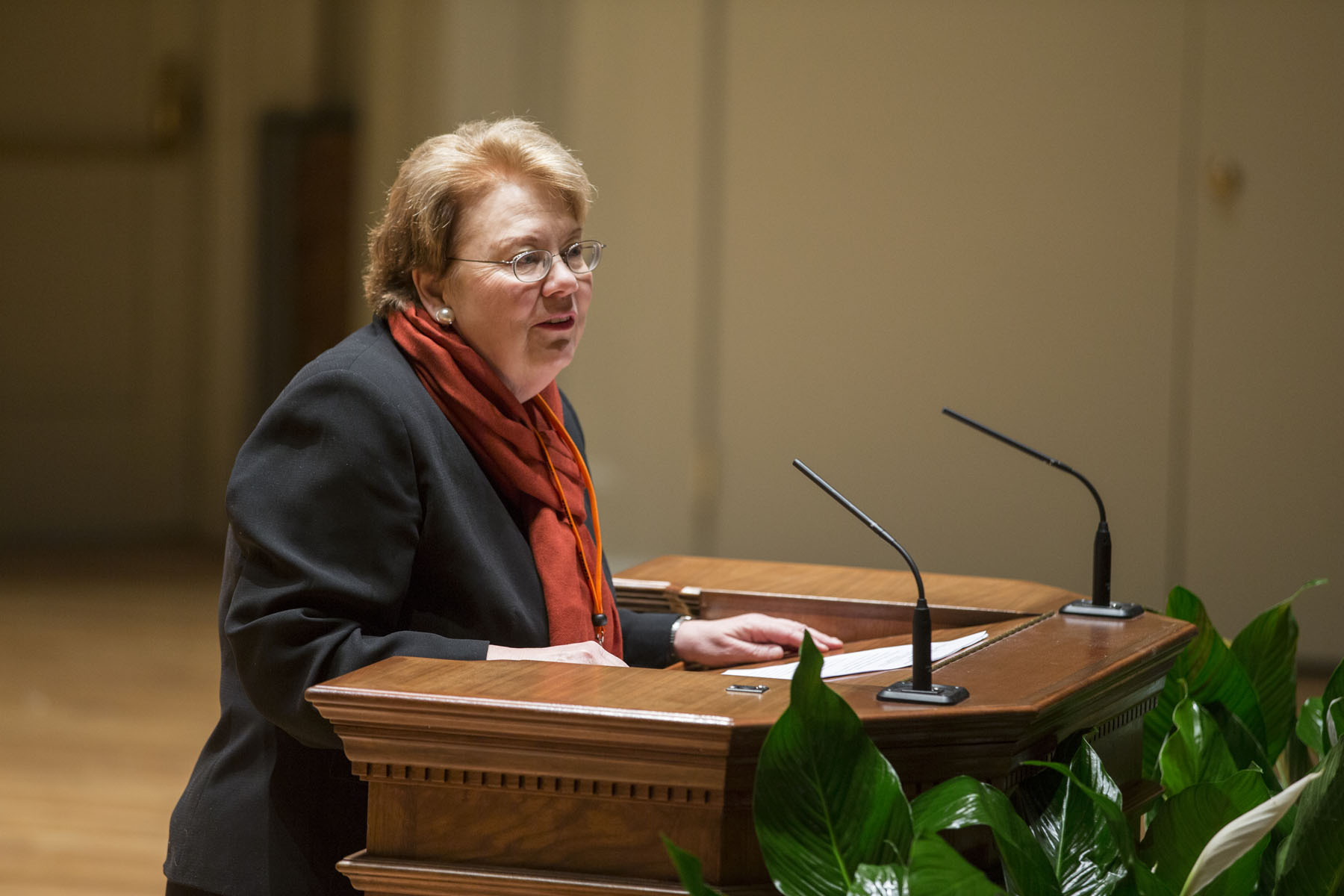 Prevention, adjudication and education on the complex and difficult issues surrounding sexual misconduct on college campuses were a few of the issues the top leaders of six colleges and universities discussed at a University of Virginia conference Monday, “Dialogue at UVA: Sexual Misconduct Among College Students.” They met with more than 250 student affairs professionals, legal and sexual violence experts and student leaders to share information, ideas and procedures in the first of two days of sessions on related topics.

U.Va. President Teresa A. Sullivan participated in the two-hour “Panel of Presidents” with Carolyn “Biddy” Martin of Amherst College; Gene Block of the University of California, Los Angeles; Philip Hanlon of Dartmouth College; Royce Engstrom of the University of Montana; and Carol Folt of the University of North Carolina-Chapel Hill. Hunter Rawlings III, president of the American Association of Universities and president emeritus of Cornell University, moderated the session. A question-and-answer period, plus students giving their advice, were also part of the panel discussion.

“This is an opportunity to find solutions that work,” Sullivan said, calling sexual misconduct one of the most troubling issues colleges and universities are facing.

“We can talk about the issue on many levels. We want to make changes to the culture that we know fuels sexual misconduct,” she said.

The leaders talked about their roles in demonstrating their schools’ commitment to taking actions that address the problem, making changes to educate their communities and improving the procedures for dealing with sexual assaults and supporting survivors.

The presidents and chancellors agreed that their leadership was key to making changes. Some high-profile cases have occurred on their campuses, such as at the University of Montana, and Engstrom said it was important to show the community that the situation is taken seriously. He combatted the notion that cases were being swept under the rug by holding public forums to discuss what actions his school was taking to address problems.

Research shows that one in five women have been sexually assaulted at college, but only 12 percent of student victims report the assault.

Colleges and universities are obligated to investigate possible sexual assault between students as part of Title IX. In 2011, the U.S. Department of Education’s Office for Civil Rights issued a “Dear Colleague” letter to school districts, colleges and universities saying “sexual harassment of students, which includes acts of sexual violence, is a form of sex discrimination prohibited by Title IX.” The letter included new instructions clarifying schools’ legal obligations to prevent and respond to sexual assault.

“Colleges have a special responsibility – and challenges – to get policies and procedures right so students trust that they will be helped,” said Amherst’s Martin, who added that combatting sexual assault is a human rights issue.

The policies and procedures that schools have enacted to adjudicate cases of sexual misconduct between students have been criticized in some cases, but Folt and Hanlon stressed that universities are in a strong position to enlist research, multi-disciplinary perspectives, educational skills and communities to make changes so that students can trust the system.

UNC’s Folt pointed out that the U.S. Department of Education wouldn’t have sent its “Dear Colleague” letter to schools if they were doing it right.

“Not enough students are going through adjudication,” she said, adding that the first response they receive is crucial. Universities and colleges need to provide more information about how the process moves forward, she said.

She pointed out that more reporting should be generally considered a good thing, because it's linked to greater awareness, not higher incident rates.

Defining consent is one of the thorniest issues in sexual misconduct cases, with alcohol or other drugs often involved and consequently, leading to impaired memory of what happened, the leaders said.

Incidents of sexual misconduct often go unreported; the culture of college communities often makes victims hesitant to make reports. Many schools have opted not to include students and faculty on their sexual misconduct committees to minimize students’ discomfort; at Amherst – part of a five-institution consortium in Massachusetts – a trained professional from one of the other schools works on sexual misconduct cases.

UCLA’s Block said it’s important to lower the barriers to reporting incidents, to show there are consequences for sexual misconduct and for schools to set expectations of student behavior.

All the presidents agreed that it is sometimes difficult to balance issues of confidentiality with those of safety and security for all involved. Their schools must legally release data about sexual assaults, but cannot name individuals, for example.

Perhaps the best way to address sexual misconduct is to prevent it from happening in the first place. Many schools are encouraging bystander intervention training for students.

Martin said although bystander training is crucial, it’s not going to solve the problem, because if two people end up being alone, there won’t be any bystanders.

Folt and Hanlon were positive about the action-oriented approach, along with other measures. Peer-to-peer programs can become a good avenue for education and influencing student culture, Folt said.

Sullivan said at U.Va., bystander intervention has become recognized as an important tool.

Montana and other schools have implemented mandatory online training for all students and employees. The training module, “Personal Empowerment Through Self-Awareness,” familiarizes them with the issues surrounding sexual violence.

It doesn’t help to stigmatize certain groups, Folt said, but since students tend to cluster in groups, it provides an opportunity to reach out to those groups.

Martin said she worried about under-reporting of sexual assault, especially among first-year women, because they might feel less inclined to report an incident when faced with the strong networks upper-class male students already have. She pointed out that the problem often comes from repeat offenders who don’t get caught.

Students from several universities shared their advice to the presidents. They mentioned providing more prevention education to male students; paying particular attention to minority and marginalized students, such as transgender students; and mobilizing more people on campus to engage in education and training.

One U.Va. law student said that just having the conference sends a positive message to survivors that sexual misconduct will not be ignored.

Other sessions of the conference tackled topics including the role of alcohol and drugs in sexual misconduct and “the hook-up culture” (a term that refers to casual sexual encounters); keynote addresses from Linda Fairstein, one of America’s foremost legal experts on crimes of violence against women, and Salamishah Tillet, a rape survivor, scholar and writer; and a student discussion after a screening of “Spitting Game: The College Hookup Culture” with filmmaker Denice Evans.

What’s Next for UVA’s Class of 2022? END_OF_DOCUMENT_TOKEN_TO_BE_REPLACED