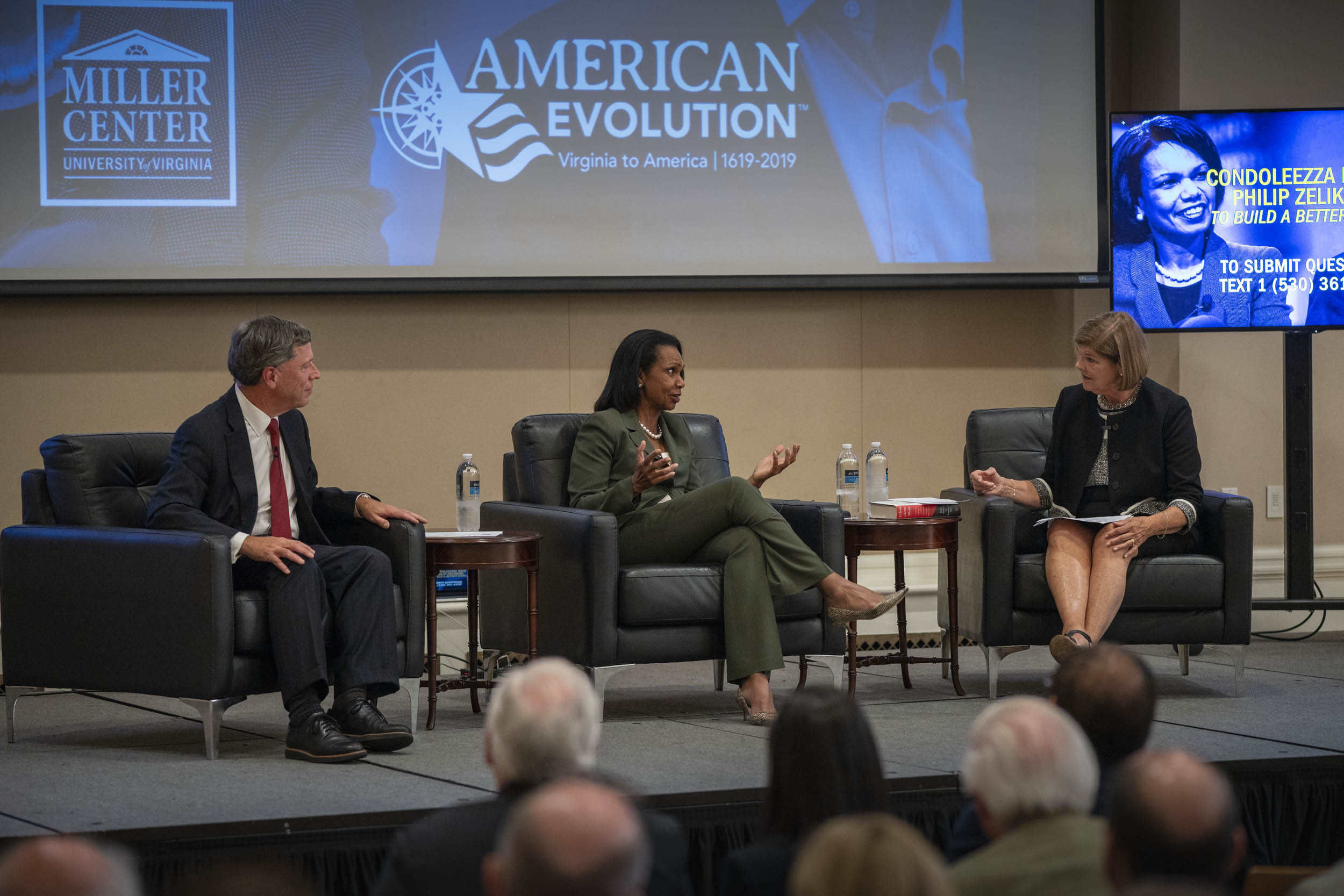 One day after the 18th anniversary of the Sept. 11, 2001, terrorist attacks, former Secretary of State Condoleezza Rice recalled that day and the immediate aftermath in the White House.

Rice said she was at her desk that morning when her assistant came in and told her about the first plane hitting the World Trade Center. “I thought it was a strange accident...” she said. “Then, in my staff meeting, they gave me a note about the second plane. That’s when we knew it was a terrorist attack.” 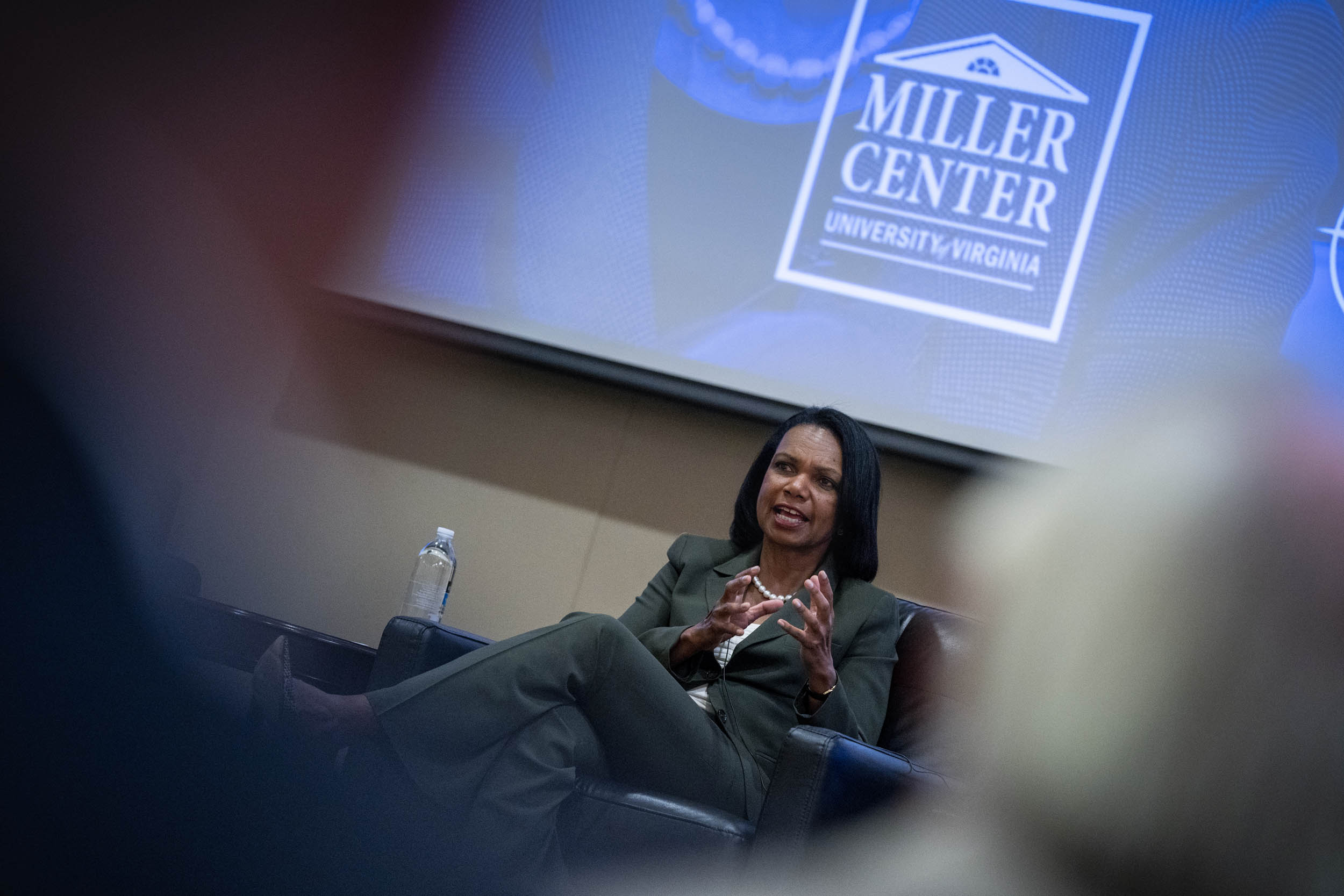 The event was part of UVA’s larger focus on issues facing democracy, including a Democracy Initiative launched last year to bring the full power of the University’s scholarship to bear on issues ranging from corruption to media to religion and race.

Like Rice, Zelikow, the White Burkett Miller Professor of History at UVA and the J. Newman Professor of Governance at the Miller Center, has a long history of public service. He served in the State Department and the Foreign Service and worked on the National Security Council during George H.W. Bush’s presidency and the President’s Intelligence Advisory Board for both President George W. Bush and President Barack Obama, as well directing the 9/11 Commission.

Both spoke about the 9/11 attacks. Zelikow was at the Miller Center, where he was the director at the time. Rice was in the White House and recalled going into a security bunker while talking with Bush, who was in Florida, and trying to find Secretary of Defense Donald Rumsfeld, who was at the Pentagon when it was hit. She said the experience reinforced the weight of her job and its impact on the American people.

“Day after day after day, it changes your view of what your responsibilities are,” Rice said.

Rice and Zelikow were at UVA to discuss the series of foreign policy choices that, in many ways, built the pre-9/11 world. Their new book, “To Build a Better World: Choices to End the Cold War and Create a Global Commonwealth,” focuses on key Cold War-era choices, from roughly 1988 to 1992, that led to the dismantling of the Berlin Wall and lasting peace in Europe and beyond.

“Our two guests were pioneers in building the world the terrorists attacked that day, and in trying to recover from and rebuild that world,” Miller Center Director and CEO Bill Antholis said while opening the event. The Cold War negotiations, he said, were “one of the greatest diplomatic accomplishments of our lifetimes.”

“Their book traces choices made 30 years ago that brought about the peaceful end of the Cold War and built today’s systems,” Antholis said. “The world is playing by that set of rules.”

Rice and Zelikow discussed reunification efforts in Germany, the liberation of eastern Europe and efforts to build free markets and free trade. Historic as those changes seem now, both said the outcome was anything but inevitable.

“In many ways, we wanted to reassure people that we have seen the world come through crises that, in retrospect, might have ended in violence,” Rice said when asked about current feelings of division and foment around the world.

“This book says that we have the tools, we know how to do this, let’s make sure that we learn the lessons of that time,” she said.

Importantly, Zelikow said, no one at the time had or could have a complete master plan. They were feeling their way through uncharted waters, one careful step at a time.

“We want to bring some clarity to how things happen, the sequence of choices… let you look over their shoulder,” Zelikow said. 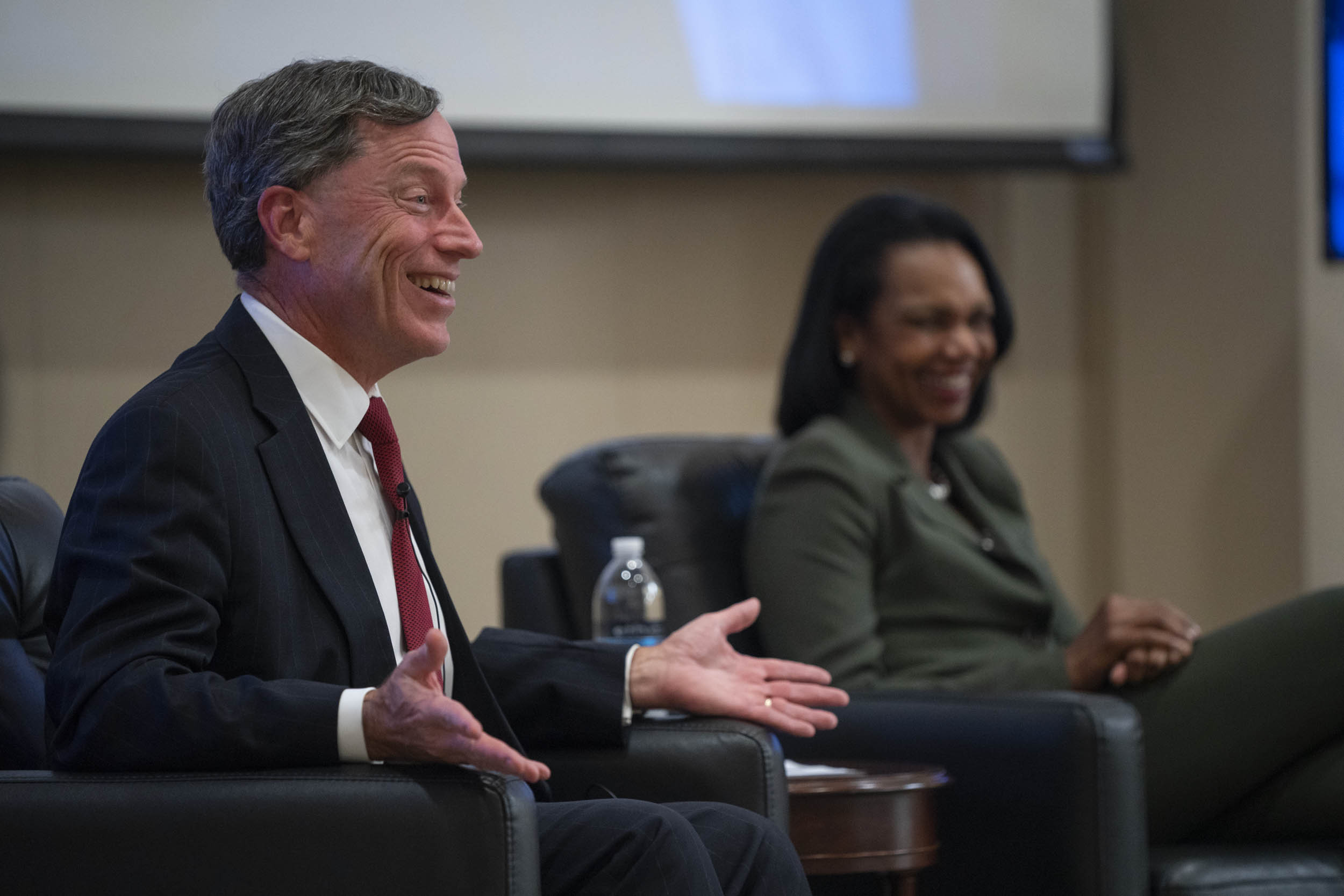 Rice recalled President George H.W. Bush’s decision not to go in person to see the German wall torn down. People urged him to go, she said, but Bush believed it was “a German moment.” In a way, that decision led to Rice’s recent experience at the former president’s funeral last year, when German chancellor Angela Merkel approached her.

“I thanked her for coming, and she said, ‘I had to go. He unified my country,” Rice said. “His sense of humility allowed Germany to take the lead, allowed the Soviet Union to swallow its own defeat.”

Rice and Zelikow fielded questions from audience members and touched on contemporary diplomatic efforts, including ongoing conflict in Afghanistan, nuclear negotiations and economic sanctions on Iran, negotiations with North Korea and the United States’ relationship with Russia and China. 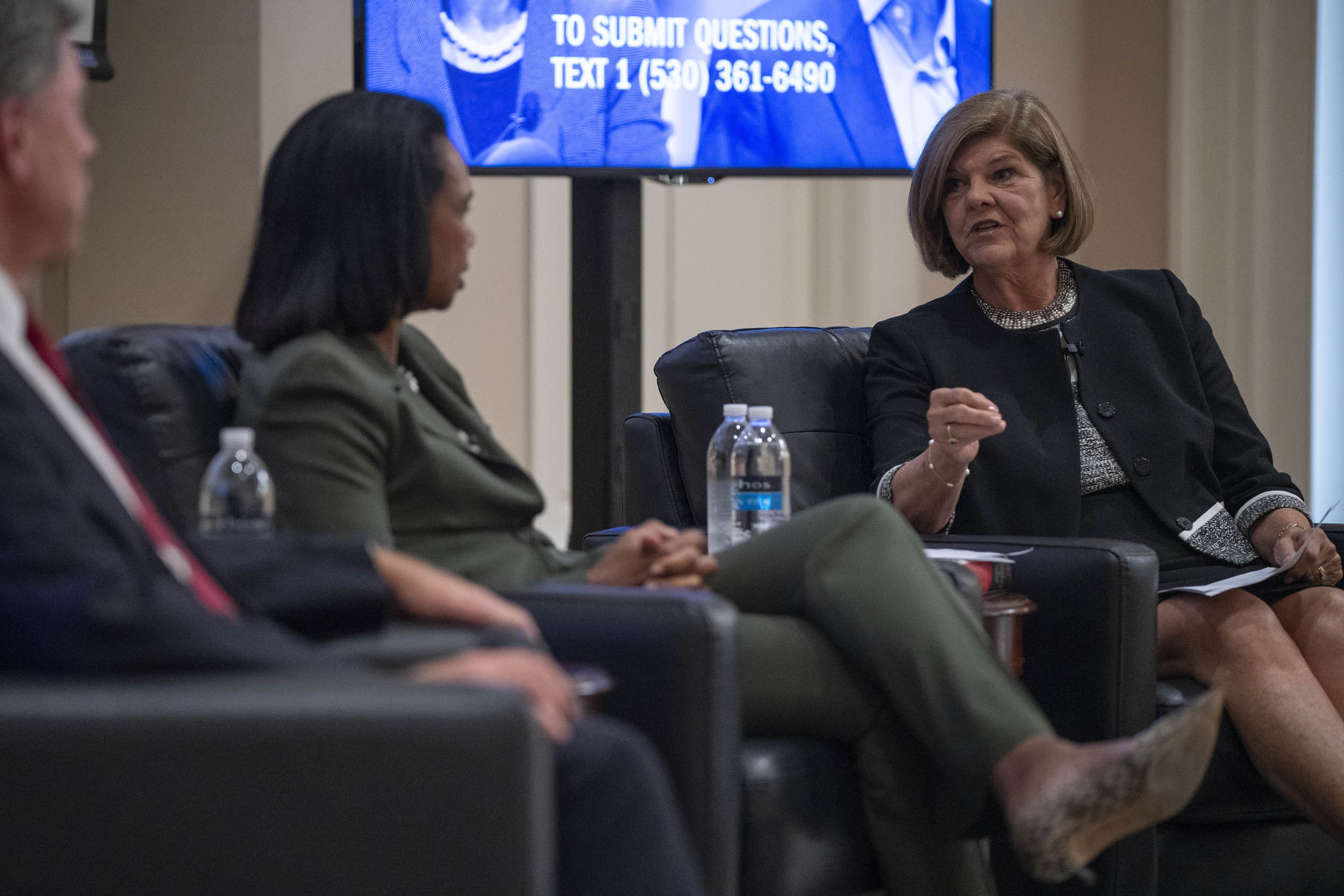 Though they shared many worries about worldwide tensions, both said they were optimistic for the future, in part because of their experiences.

“You realize we have been there before,” Zelikow said. Working through such conflicts, he said, should not be one grand gesture or statement, but a slow series of choices.

“You work together on specific issues and choices, feeling your way across the river one stone at a time,” he said.

Rice said her principal concern for the future lies not in one particular diplomatic issue, but rather in Americans’ confidence in their country.

“You cannot be confident if you are not confident any longer in who you are,” she said, noting that America is not defined by one race or religion, but by the idea that “you can come from humble circumstances, you can do great things and it doesn’t matter where you come from, it matters where you are going.”

“What I see happening instead is that every group and every identity has its own narrative and its own grievance, and we are pulling ourselves apart and pulling against one another,” she said. “Substantial parts of the American populace feel left out of the American ideal and until we address that I don’t think we are going to be strong enough as people to do this … and it won’t be a better world without that American leadership.”

Class of 2020: Memories and Moments From a Long-Anticipated Celebration END_OF_DOCUMENT_TOKEN_TO_BE_REPLACED