Conversation on Community of Trust Turns to Questions About Honor, U.Va’s Growth and Change 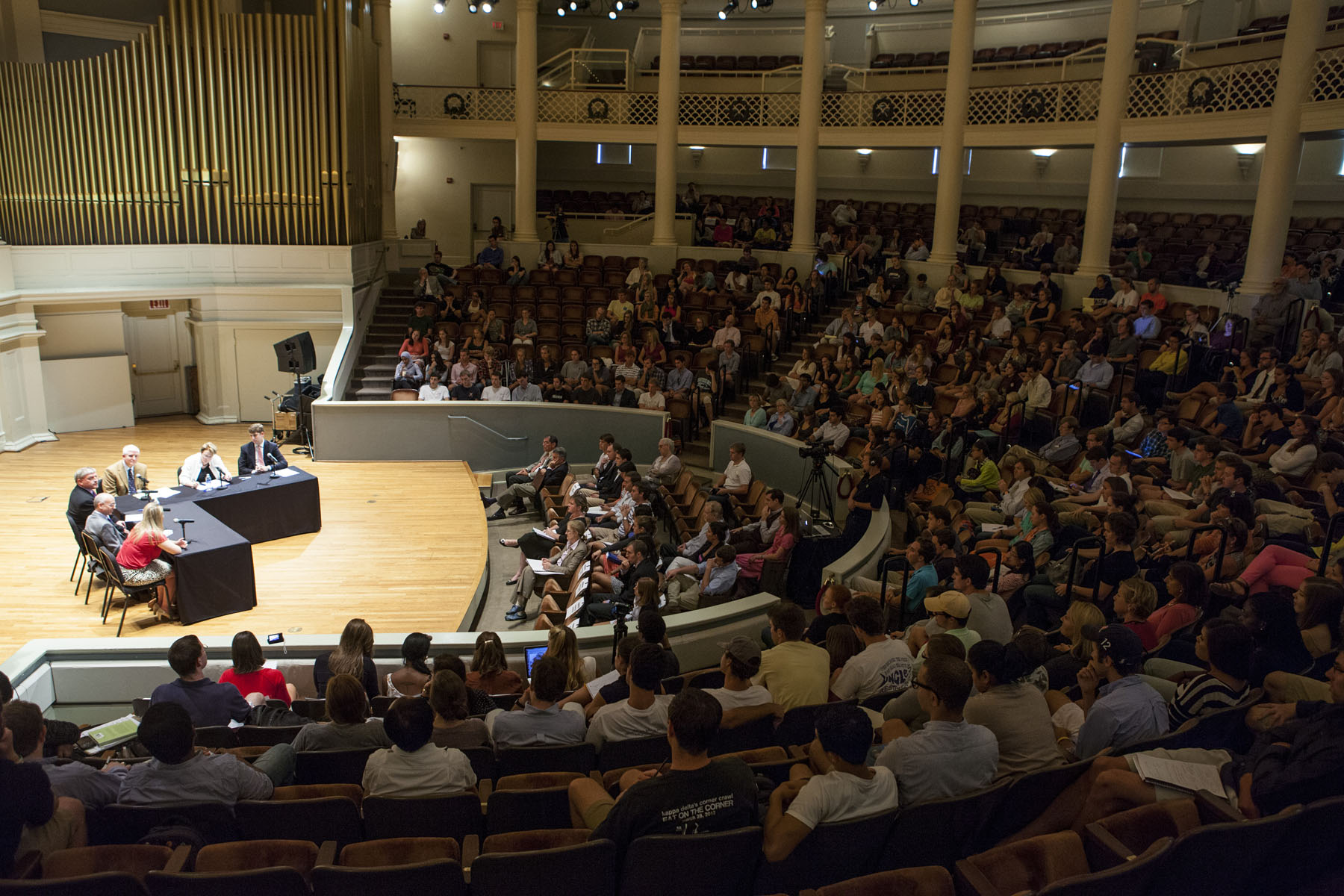 Questions about the role of the University of Virginia’s honor system in a changing academic community took center stage Tuesday afternoon, as University President Teresa A. Sullivan headlined a panel discussion on the “Community of Trust.”

Sullivan and the other discussion participants ­­– George Cohen, a law professor and chair of the  Faculty Senate; Michael Levenson, an English professor in the College of Art & Sciences; Hillary Hurd, the student representative to the Board of Visitors; and Honor Committee Chair Stephen Nash – spoke to an audience of more than 400 faculty and students in the Old Cabell Hall Auditorium.

Over the course of an hour, the panel answered questions posed online by students, faculty, alumni and staff. While Sullivan’s June resignation and reinstatement were touched upon, the conversation focused primarily on the role of honor and the honor system in the University community.

Nash said this year especially will shape the future direction of the University. “It’s a special opportunity to be a student at U.Va. this year,” he said. “There’s a lot of momentum to have a lasting impact on the University.”

The panel addressed questions on topics ranging from the honor code’s single sanction to the importance of such values as honor, integrity and trust within the University community during and after the June events.

Several questions also dealt with how the honor code will adjust to changes and the University’s growing student body, which led to the issue of how it will be enforced in U.Va.’s online course offerings. Sullivan expressed concern over the amount of cheating reported in online classes, and how the University’s honor system will be applied to online students who are not physically a part of the U.Va. community.

Other panelists, though, appeared confident in the honor system’s adaptability. Nash explained that the same concerns have been raised multiple times over the years during periods of expansion and change at the University, but the honor system has always persevered.

“Trouble will come from apathy, not growth or change,” Nash said, emphasizing the student body’s responsibility to teach the honor code to each incoming class.

To continue to foster the community of trust, the Honor Committee hopes to build a stronger dialogue with students through substantial conversations about their views on the honor code, how they interact with one another and how willing they are to report a suspected violation, Nash said.

Tuesday’s conversation was the first of many that University leaders hope to hold over the course of the academic year. “We’re committed to making this a year of communication,” Levenson said.

The direction the honor code takes is in the students’ hands, and it is up to the student body to decide how they wish to see it implemented, Groves said during the panel’s closing remarks. “At the end of the day, it is your system,” he said.

The discourse continues online through an interactive blog, “The Future of the University,” that was to go live Wednesday evening. Any member of the U.Va. community who wishes to participate in the conversation can send an email to humanities@virginia.edu and they will be invited to contribute to the blog.