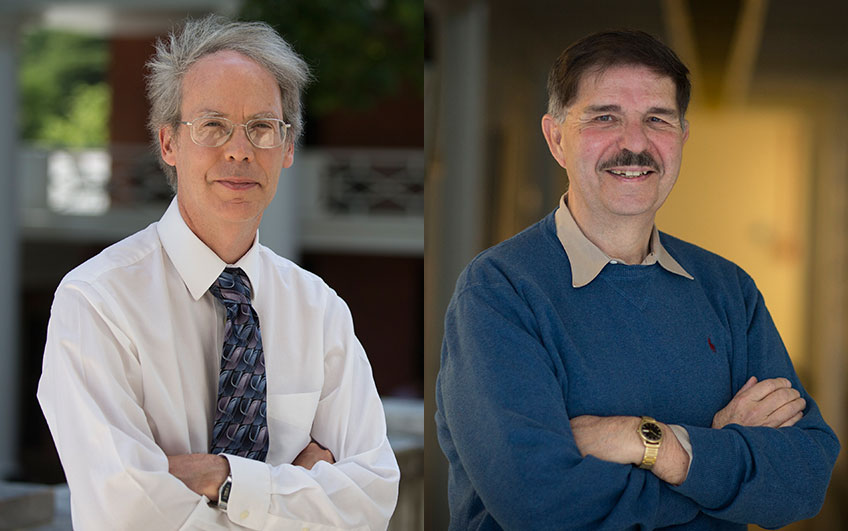 Two of the University of Virginia’s most accomplished faculty researchers – physicist Brad Cox and astronomer John Hawley – have been selected as 2014 Distinguished Scientists.

The awards, given annually by the Office of the Vice President for Research, honor longtime faculty members who have made extensive and influential contributions in the sciences, medicine or engineering.

Cox and Hawley will be honored in January at a dinner reception at the Colonnade Club.

“This U.Va. research tradition has honored scientists over the years who have changed the way we think about topics from human psychology, to how cells move, to the design of new materials,” Thomas C. Skalak, vice president for research, said. “Dr. Cox and Dr. Hawley are pioneers who have produced new understanding of the fundamental structure of matter and the dynamics of the universe, respectively. This new knowledge will be the basis for new theories and new vistas. The work helps us to realize that we are still learning our place in the universe.”

U.Va. faculty members and department chairs annually nominate senior faculty in the sciences for the awards, and a panel of faculty peers judge the nominees based on publications, awards and comments from colleagues outside the University regarding the quality of the research and its importance to society.

Winners are chosen for distinguishing U.Va. through a large body of work conducted over a long period of time at the University; each receives a $10,000 grant to enhance their research activities.

“We are honored to have two scientists of such international acclaim serving on the faculty of the College and Graduate School of Arts & Sciences,” said Ian Baucom, dean of the College.

As a particle physicist, Cox studies the essentials of matter, the unimaginably small fermions, quarks, leptons and bosons that make up atoms, which make up all things.

Working with colleagues at U.Va. and across the globe, Cox helped develop, build and operate particle detectors that became part of the $10 billion Large Hadron Collider in Europe. Experiments at the collider replicate conditions of the infant universe.

In 2012, Cox, as part of an international team of physicists, helped confirm the existence of the Higgs boson, the particle that gives mass to all other particles, serving as the “glue” that holds together everything in the universe, from atoms to people. It was one of the most important scientific discoveries in decades, proving that a long-held, over-arching physics theory, the Standard Model of Physics – used to describe the building blocks of matter and their interactions – is indeed sound and a standard on which to build other theories.

Cox now is working on a major upgrade of a primary detector for the Large Hadron Collider, as part of a larger upgrade of the entire machine, which is expected to produce new physics discoveries for decades to come.

In recognition of Cox’s contributions to the discovery of the Higgs, Virginia Gov. Terry McAuliffe and the Science Museum of Virginia earlier this year named him a Virginia Outstanding Scientists for 2014.

Cox also is known for discovering essential insights to how matter became dominant over antimatter in the early universe, and for building a world-class elementary particle physics group at U.Va. during his more than 25-year career here.

Hawley is best known for his groundbreaking discovery in the 1990s – with former U.Va. colleague Steve Balbus – of the mechanism magnetorotational instability that accounts for the process of accretion, a widespread phenomenon in astrophysics.

Accretion plays a key role in star formation and contributes to the growth of supermassive black holes in the centers of galaxies, among other phenomena. Astrophysical systems powered by accretion are some of the most energetic in the universe, including quasars, active galactic nuclei and gamma ray bursts.

Hawley and Balbus’s research solved a fundamental problem in astrophysics and transformed the field of accretion disk theory. Subsequent research by both investigators and many other astronomers worldwide has substantiated and expanded upon the initial discoveries, and magnetorotational instability is now part of the standard theory of activity in black hole systems.

Hawley also is known for work that has transformed the use of computer simulations for astrophysics research, bringing them on par with observations and analytical theory.

“John [Hawley] isn’t just one of the world’s most decorated researchers,” Baucom said. “As the College and Graduate School of Arts & Sciences’ associate dean for the sciences, he also devotes his time to recruiting the best science faculty to the College and to our capacity to produce world-leading research and a world-quality education for students across every branch of the sciences.”

Hawley also is a highly regarded instructor of a popular U.Va. course in cosmology for non-science majors.

The Bigger Picture: Starry Night in the Rotunda END_OF_DOCUMENT_TOKEN_TO_BE_REPLACED